CWallet is a fintech startup that enables users to receive their salaries on the platform, while also being able to conduct online and offline transactions, and ultimately, send money to other countries in a seamless fashion.

By Pamella de Leon July 20, 2022
Opinions expressed by Entrepreneur contributors are their own.
You're reading Entrepreneur Middle East, an international franchise of Entrepreneur Media.

In 2021, Statista.com found that Filipinos working in Qatar sent over US$829 million in cash remittances to the Philippines. But as a long-time resident of Qatar, Michael Javier is well-aware of the plight of fellow expats (regardless of whether they hail from the Philippines like him, or elsewhere), both in the country and in the wider region, who, while wishing to send most of their income back to their families in their native countries, are often unable to do so, owing to problems like high remittance fees, or the lack of a bank account.

Seeking to introduce a new money remittance and payment solution for unbanked and low-income expats in Qatar, Javier launched CWallet, a fintech startup that enables users to receive their salaries on the platform, while also being able to conduct online and offline transactions, and ultimately, send money to other countries in a seamless fashion.

CWallet's origin story begins with Javier joining one of the executive management programs at HEC Paris in Qatar with the help of his then employer's sponsorship, and then focusing his thesis on exploring opportunities on fintech solutions for Qatar's unbanked and low-income Filipino population. This study ended up becoming the basis for the CWallet concept, and also how Javier met his co-founders: Dr. Abdul- Mohsin AlYafei, Mustafa Al Sayrafi, Khalid Al Yafei, Nasser Al Haj, Abdulaziz Abdulla, and Mohammed Kafoud. Having started out as classmates, and then friends, and onward to business partners, this group of entrepreneurs decided to invest money, time, connections, and expertise to jumpstart the business, whilst having different roles in the startup.

To validate the concept, Javier and the team conducted surveys and interviews with potential users of the app, while also onboarding early adapters to validate the product. The concept was later incubated at Digital Incubation Center, an initiative of Qatar's Ministry of Communications and Information Technology, wherein Javier and his partners were encouraged to build CWallet in a manner that it's able to cater to low-income and unbanked migrant workers, domestic helpers, and blue-collar workers, all of whom would like access to financial services. Soon after, CWallet also received support from Qatar Science and Technology Park's Product Development Fund in the form of a grant for local early-stage startups to develop products and services for the Qatari market.

Today, with a vision to promote financial inclusion as well as a cashless society, CWallet is a multi-functional startup that operates as a digital wallet, while also offering remittance and online payment solutions. Javier explains that the startup offers three different products, of which the first is CShop, an online marketplace where users can buy gifts and gaming cards, pay government and utility bills in their home country, while also enabling users to order food, medicines, and groceries for their families back home and deliver it to their doors. The second product, CPay, is an online payment gateway catering to online businesses of all scales -from micro-SMEs, to SMEs, fellow startups, and online resellers- to allow them to get paid online, send payment links and invoices. 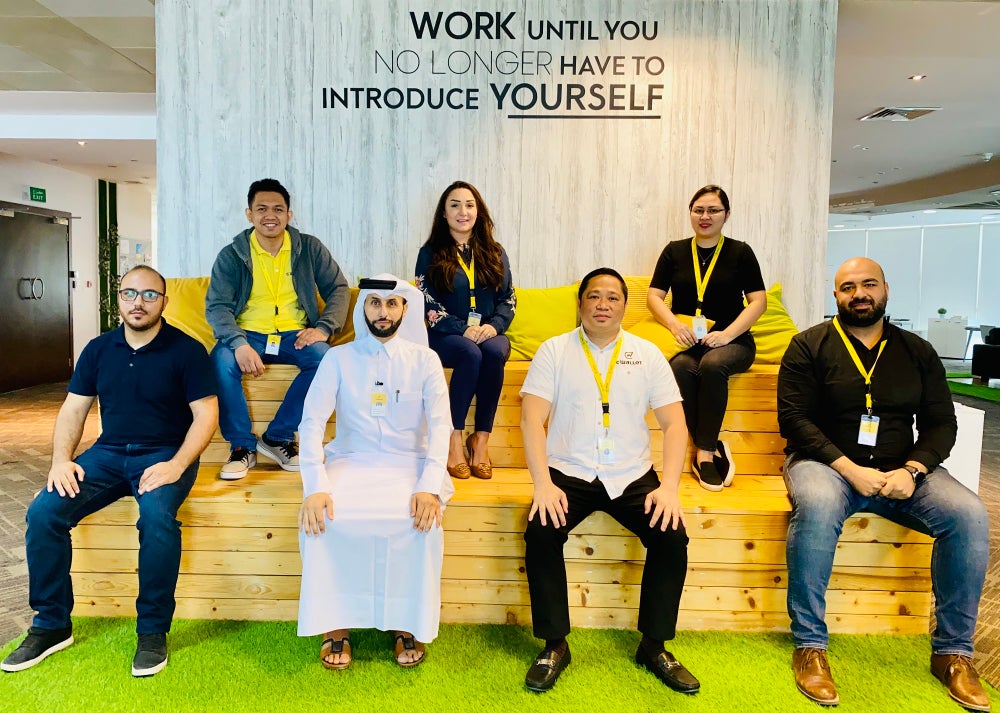 Its last product, CWallet, is a mobile money wallet focused on payroll, payment, and remittance services. It allows employers to pay employees via wallet-to-wallet transfers, while users can also pay online, on-site, and on-delivery to conduct transactions. With the MENA having a huge expat population, Javier believes that his concept has a lot of potential in the region. "The majority of the population shows high demand for cheaper, better, simpler, and faster ways of sending money to their home countries," he notes.

As for its business model, CWallet generates revenue from a percentage profit sharing on remittance, a commission percentage per transaction for its B2B customers like merchants, as well as a service charge on its marketplace features. "With our upcoming features, we shall be passing our services to corporates, merchants, and micro-entrepreneurs where they can subscribe to our services on minimum participation fees," Javier adds.

With CWallet being his first entrepreneurial endeavor, Javier admits that his journey with the startup has been one with a lot of twists and turns. "Like any other entrepreneur, you have to know how to fail fast and learn faster," he reflects. "Sometimes, you have to learn it the hard way… In my personal experience, your startup is not your baby. It is your experiment. You need to learn how to let go, and pivot." In terms of challenges, he puts building the actual product at the top of the list, followed closely by funding. "As they say, cash is equivalent to air for startups," he explains.

"You run out of cash; you die immediately. So, everyday is funding day, but it doesn't mean that everyday is a spending day either. Every single penny you let go must be measured, must be valued, and must create an impact, a learning experience, acquire a customer, gain a new partner, or just simply [to] get exposure to VCs, media, ecosystem builders, regulators, etc."

Related: Saleh Safran Is Using The Internet Of Things To Power His Qatar-Based Startup, Subol 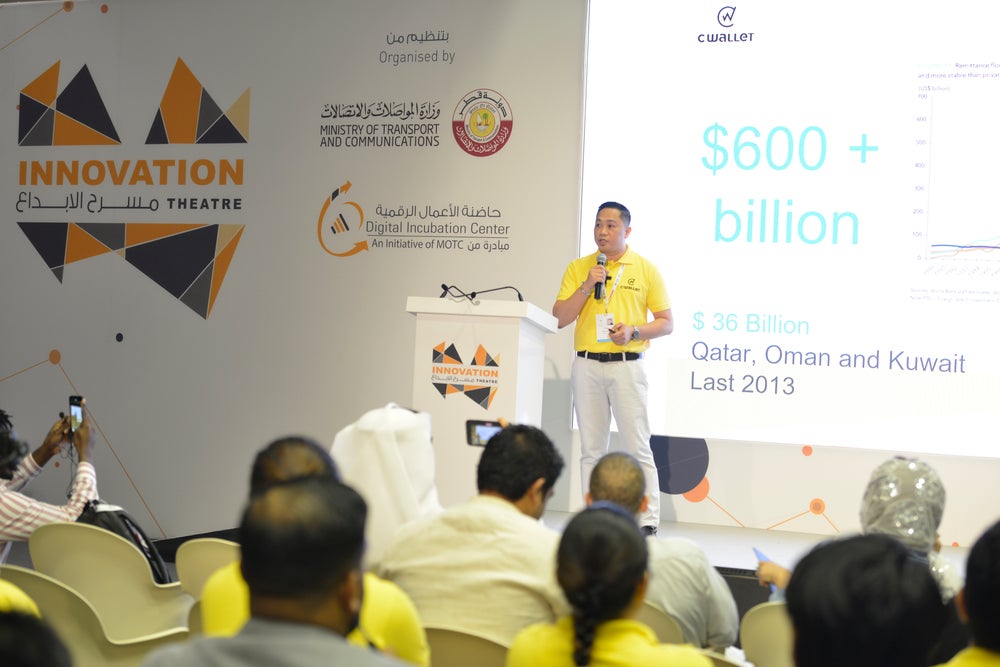 Given its operations in the financial realm, another tough challenge that the company has had to face has been in getting the go-ahead from the requisite regulators in the space. "It was a very long process- requiring lots of resources, time, effort, money, expertise, consulting, security, risk, [and] compliance documents, and I can go on and on," Javier admits.

"In fact, most of our fundraise was spent on getting regulation. We also found out there is no shortcut in this part of the business, because it's mainly processes and procedures, which will take time." Nonetheless, Javier says the team is working hard on acquiring regulation, along with the assistance of the Qatar Central Bank- at the end of the day, he and his team believe this to be a necessary step to ensure the protection of customers when they use CWallet.

The team's perseverance seems to be paying off- according to Javier, from just 1,500 users, the app now hosts 15,000 unique users. "From zero remittance users to 1.5 million verified customers, we are scaling up like never before due to our strategic partnerships," Javier says. "Our airtime top-up, government, and bills payment, and international commerce covers over more than 150 countries, allowing us to serve more almost all expats in the region." Some of its partners in the region includes Visa, Microsoft, Al Dar Exchange, Jazp, as well as prominent entities in Asia, such as PLDT Global, DTOne, BeamAndGo, M2P, WorkerzApp, EasyPay, and more. "We're aiming to be known as a super services startup, instead of just a super app," Javier adds. .

And though it was initially self-funded, in June this year, the startup recently closed its pre-Series A round at $875,000, led by Qatar-based investment firm MBK Holding, with participation from investment company Angels.qa, local angel investors, and the co-founders themselves. According to Javier, to date, the team have raised a total of over $1.4 million, accumulated from bootstrap, government grants, angel rounds, and its recent funding round.

It has also bagged a number of accolades, including winning Qatar Fintech Hub's first hackathon challenge in 2020, becoming one of the top nine finalists during Seedstars and International Organization of Employers' Migration Challenge Startup Competition, as well as one of the winners of the Migration Entrepreneurship Prize 2021. In June this year, it was also one of the top 20 finalists of the C3 Impact Accelerator Program, powered by HSBC. 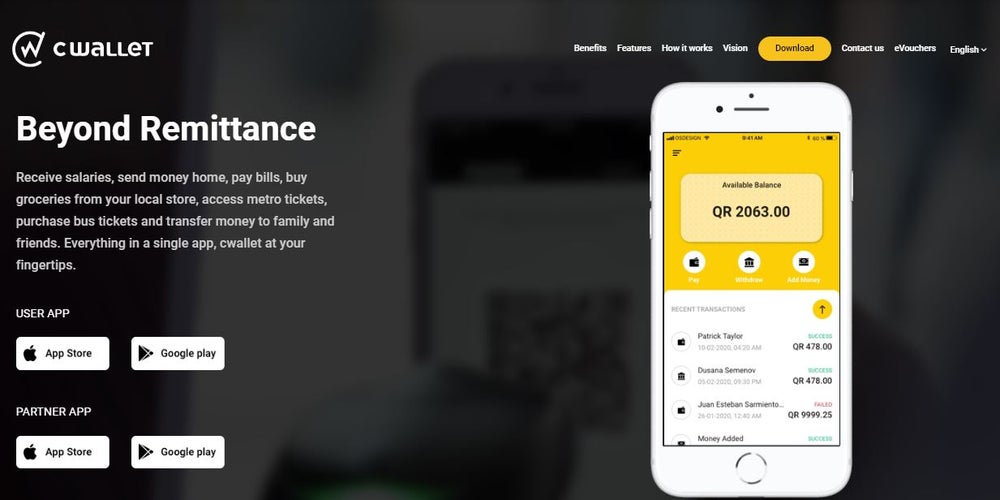 As for future plans, it's safe to say that Javier and his partners have a lot on their plates, which includes a memorandum of understanding with Microsoft to cover local and international partnerships and leverage diverse business opportunities, followed by a five-year strategic partnership with Visa. On the product side, Javier reveals that the soon-to-launch CWallet Mobile Money 4.0 version will have a remittance feature developed in conjunction with VISA and Qatar National Bank, which will enable users to send money instantly, anytime and anywhere.

The app will soon also enable the issuance of virtual prepaid cards, as well as features such as tap and pay via NFC technology, scan and pay via QR code technology, and pay-by-face via face recognition technology, further enabling cashless and contactless transactions for online, offline, and on-mobility payments. And of course, the startup is aiming for expansion too- countries like the UAE, KSA, Kuwait, Oman, and Iraq are first on the list, followed by Turkey, as well as markets in Africa and Asia.

From a personal standpoint, Javier is hopeful that his entrepreneurial journey will inspire fellow Filipino expats in the Middle East to get out of their comfort zones, and dream bigger with what they want to do with their lives. "Yes, we can be the best employee of the month, the best nurse, engineer, secretary, etc.," he says. "But the concept of the overseas Filipino worker is the pastwhat if we can be overseas Filipino entrepreneurs, and be the boss and leader of our companies?"

Having said that, Javier points out that becoming an entrepreneur shouldn't be thought of as a joyride either. "With dedication, faith, and smart work, along with investing in yourself, then there's the possibility that you'll eventually get lucky," he declares. "Yes, I believe in luck, and I believe you get more luckier if you and your team are working harder than anyone else!"

This mindset thus forms the basis of Javier's advice for entrepreneurs who are just starting out on their businesses. "Hold on tight, and never ever give up," he declares. "Every day is a new day, it could be bad, and sometimes, worse. But have faith, and hold on to your team, and keep that hunger, that dream, the desire, and fire… Wear your brand like a fanatic- eat with it, live with it, dream with it!"