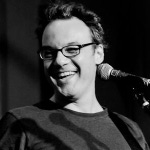 New York-based recording artist, writer, and professor Mike Errico has built his name on the strength of critically-acclaimed releases and extensive composition for film and TV. He has taught songwriting at Yale and Wesleyan universities and is presently at NYU’s Clive Davis Institute of Recorded Music. In addition to his performing career, Errico’s opinions and insights have appeared in publications including The New York Times, CNN, The Wall Street Journal, Fast Company, The UK Independent and The Observer. His new album, Minor Fits, will be released on June 27th, but advance singles are available at PledgeMusic, Bandcamp, and major streaming services

Want to Be Happy? Embrace Insanity.

When a fan asked musician Mike Errico what it was like having a newborn and releasing a record at the same time, he had an answer many entrepreneurs will relate to.