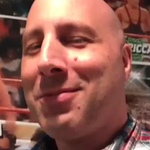 Tom Ricca is an American professional wrestler, known in the ring by Tony Ricca, The Pharaoh, Nicky Sauce and The Hammonton Hitman. He is also the promoter of the NJ-based promotion AKW Arena Kaged Wrestling, and founder of Cannoli World, the premier bakers of old world cannolis in Hammonton, NJ.