Facebook has trumped television, print, and even the online medium when it comes to capturing the Arab youth's attention in consuming news, according to the ninth annual Arab Youth Survey brought out by ASDA'A Burson-Marsteller. "Among young Arabs, Facebook is the number one medium for daily news," declares one of the findings of the study, which holds the reputation of being one of the largest such surveys of its kind. 35% of the surveyed youth get their news on Facebook, 31% read news online, 30% rely on television, and an alarmingly low 9% get it from the newspapers, shows the study.

Further, compared to the 2015 and 2016 editions of the research, 2017 also shows an increase in the percentage of youth who mainly use Facebook to "share interesting news articles." In terms of frequency of usage and popularity among the region's youth, Facebook and WhatsApp have surpassed Twitter, YouTube, Instagram and Snapchat by a large margin. Not surprisingly, Instagram has shown the strongest surge in the past one year growing by 20 percentage points. 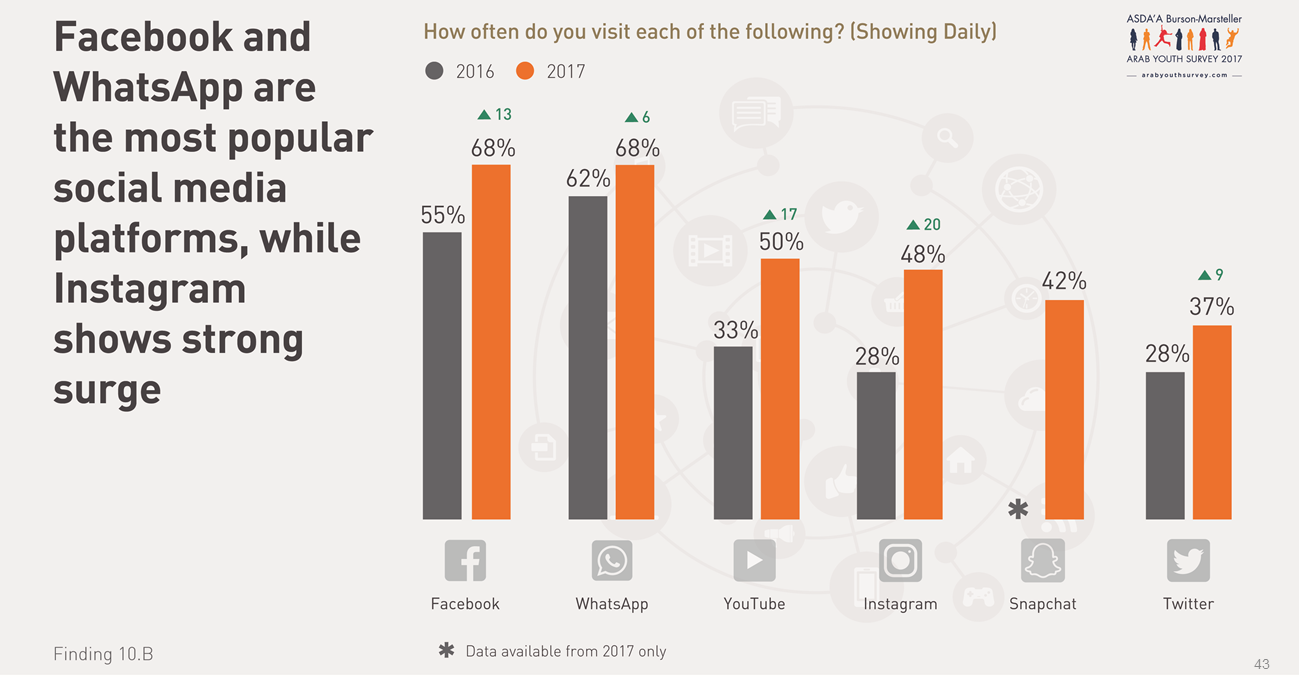 Image credit: Arab Youth Survey 2017.
Among other key findings of the survey, what stands out is the fact that nearly half the Arab youth opined that the current education system falls short of preparing the student community for jobs of the future. Similarly, it's also interesting to note that the UAE has emerged as a destination of choice for the region's youth, as most young Arabs said they would like to live in, and like their own countries to take after the UAE.

Conducted by global polling firm PSB Research in the form of face-to-face interviews with 3500 Arabs (male and female) in the age group of 18-24, the survey aims to "present evidence-based insights into the attitudes of Arab youth" in 16 countries in the MENA region. The study covers six GCC states (Bahrain, Kuwait, Oman, Qatar, Saudi Arabia and the UAE), North Africa (Algeria, Egypt, Libya, Morocco, and Tunisia) the Levant (Iraq, Jordan, Lebanon and the Palestinian Territories) and Yemen.