Offering a holistic solution to healthy living, Natufia's smart garden nestled in your kitchen provides the optimal combination of water, lighting, nutrients, and even music.

By Pamella de Leon
August 10, 2021
Opinions expressed by Entrepreneur contributors are their own.
You're reading Entrepreneur Middle East, an international franchise of Entrepreneur Media.

Can you imagine growing your own salad in your kitchen? This is what KSA-based enterprise Natufia is daring to achieve. Founded in 2015 by Gregory Lu and Nadim Taoubi, Natufia is a multi-awarded research lab specializing in hydroponic kitchen appliances. With its fully integrated and automated indoor smart hydroponic kitchen garden, especially created for restaurant kitchens and households, Natufia enables people to grow an assortment of the freshest plants, vegetables, flowers and herbs all year round right in the heart of their kitchen.

Offering a holistic solution to healthy living, this smart garden nestled in your kitchen provides the optimal combination of water, lighting, nutrients, and even music (as the team's research found that it helps to stimulate more growth). The fridge-sized appliance is easy to use: seed pods -which can be compared to the size of Nespresso capsules- are placed in the nursery drawer where it will grow for about 10 days, after which the pod will be moved to grow in another cabinet. After 20-30 days, you are ready to harvest, and every 3-4 months, you just need to refill the nutrients. All other steps are automated as the Natufia smart kitchen garden creates the perfect environment needed to grow plants. It can grow 32 different types of plants, such as basil, lettuces, cilantro, kale, dill, cherry tomatoes, mint, and more, simultaneously, producing 1-2 plants per day.

Gregory Lu, co-founder and CEO, says that the startup is aiming to solve the multifaceted problems that are inherent in the food industry today. "The plants that will grow in your kitchen are free of pesticides, preservatives, and because of [its] freshness, they will give you up to 400% more vitamins," he says. "Because they are grown right where they are consumed, you will rediscover a wider biodiversity, true original taste of the green vegetables, whilst they are being accessible anywhere and from the proximity of one's kitchen." The startup also aims to minimize the prevalent environmental impact by reducing food waste, packaging, pollution, and food miles. It also addresses the gaps of food security and traceability awareness, a prevalent issue for the region's food security sector. "We are disrupting the way people relate to their food and reinventing the consumer meal journey by allowing communities to take control of their food- produce where it is consumed," Lu says, explaining the startup's mission. "By using Natufia, we encourage people to change their food habits by consuming a diet rich in vitamins and nutrition-dense vegetables and greens, improving their health and helping our planet." 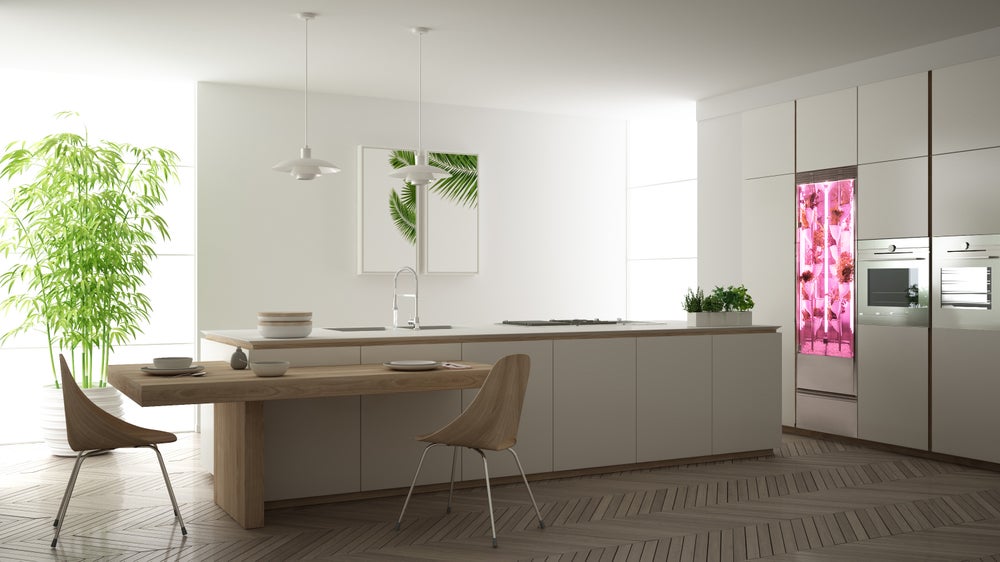 For Lu, taking on the path to entrepreneurship was inevitable, he says. "I have been an entrepreneur from a young age, so that's something that's always been inside of me." Beginning his career in the property development and investment sector, the entrepreneur accumulated over 25 years of experience in the real estate sector, and decided to diversify his businesses by diving into the food industry. Upon buying an olive plantation in Sicily to produce olive and tomato sauce, Lu faced the common issues of needing to use pesticides and fertilizers, which contradicted his views on healthy food and showcased the significance of the organic food industry.

"I felt people needed to experience what I experienced in these hills of Sicily- the freshness, the connection of growing your own food and the quality," adds Lu. "My real estate background also thrusted me into following up the idea. If people could grow food in their own homes, offices, schools, or hotels, all year around, having fresh quality food easily accessible, then the world would be a much better place." Lu is joined in his mission at Natufia by co-founder and COO Nadim Taoubi, whose background includes advising tech companies at Deloitte and LD&A, as well as founding his own Estonia-based e-commerce platform, Ooolala, which was sold to an undisclosed buyer in 2016.

Originally launched in Estonia, the co-founders bootstrapped the concept and built a basic prototype to show at a few European fairs and evaluate initial reception. It kickstarted the first phase of their journey, which was focused on developing the technology: "It took us years to do that, but we accumulated over 20 patents." This was followed by a proof of concept and field-testing phase, wherein the duo invested in R&D and grew its team. "We have sold dozens of our Natufia [product] to the US, Europe and the Middle East to receive feedback and analyze large amounts of data."

As the company grew, the co-founders looked outside Estonia for investment partners. In 2018, the startup was accepted into the Techstars Dubai accelerator program, held in partnership with GINCO Investments. This proved to be an advantageous step, as the startup was able to raise US$1.2 million in a seed funding round, led by Butterfly Ventures, Techstars, and GINCO Investments, as well as several angel investors from US, Europe and the Middle East. The capital was set to pave its expansion plans to Europe and the US.

"We spent a lot in Dubai with Techstars, and understood that the region is a great market for Natufia," says Lu. Later on, the CEO met representatives from the King Abdullah University of Science and Technology (KAUST) at a conference in London. After months of discussions, KAUST announced it would lead a $3.5 million investment in a Series A funding round, though its venture capital investment arm KAUST Innovation Fund, with Butterfly Ventures also participating in the round. This puts Natufia's total funding to $4.7 million, with previous investors Butterfly Ventures, Techstars and GINCO Investments, remaining as minority shareholders.

As part of the new capital infusion, the startup is also relocating to Saudi Arabia, basing itself at the KAUST Research and Technology Park (KRTP) to help grow its R&D capabilities. Lu explains, "We felt it would be a huge opportunity being in the heart of the region to develop the market, but also being at KAUST on campus could give us the possibility to keep working on our technology to make it even better and advanced." Lu also commends KAUST's distinctive infrastructure and tools, which can be greatly beneficial for the startup's innovative solutions.

"I give you an example: for us, it is very important to test the quality of our plants -the vitamins, nutrients, minerals, etc.," he explains. "In Estonia, it was a long and complex process. We had to reserve the test well in advance, transport the plants, which come with a lot of paperwork, expensive fees and long waiting times, before getting the result without being sure it was fully accurate... Today, at KAUST, we simply have to go across the street and get the result the same day. It means our research is more efficient. The other major factor is the community we continuously interact with, exchanging ideas with professors on pertinent topics like sensors, biology, botany, technology and so on- and that's extremely enriching for new ideas and technology developments. We might even use KAUST technology in our future developments." 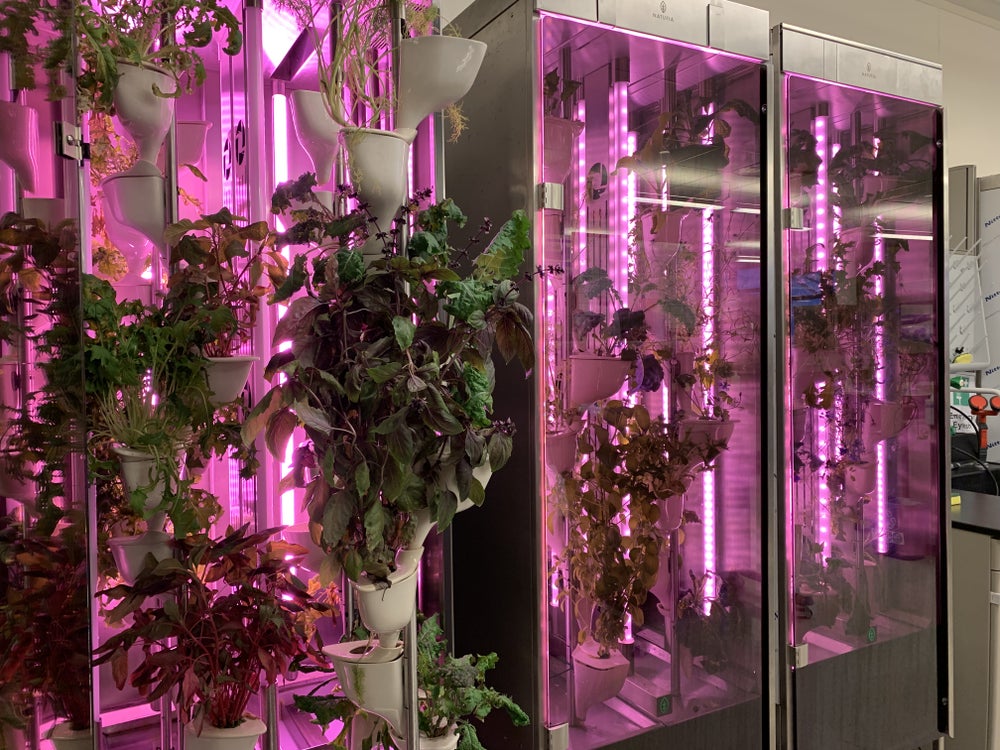 Besides furthering its R&D development, Lu is also keen to help create job opportunities and align themselves with Saudi's Vision 2030, which inevitably establish the Kingdom's status as a top choice for businesses in the Middle East. "And we want to be a part of that," Lu points out. At the moment, Lu notes that it's all about the production of the newly upgraded Natufia smart kitchen garden model in Saudi Arabia, and scaling its distribution locally and internationally. Next up, the team hopes to move towards mass production and develop new Natufia models.

Having partnered with KAUST and Jumeirah Group, today, the startup now consists of a team of 12 people and is focused on its prime model, the Natufia smart kitchen garden, retailed at $7,955 and available worldwide. With distributors in the USA, Europe, Australia and Saudi Arabia, the team have more lined up for next year- a model for those keen on a smaller budget, and another model to cater for commercial settings. On facing hurdles, Lu comments, "I personally work and build companies in different countries and contrary to what people might think, a lot of things are online and work smoothly. The biggest challenge was to get the residency for the core team who were not Saudi native and a bank setup for the company. It takes perseverance and patience."

However, the key benefit that the co-founders found ("and a pleasant surprise") was the quality of local talent they found to work at Natufia, "The young generation is very well-educated, studied abroad and eager to work in the type of environment that Natufia creates- high tech, fast-moving and with big growth potential." And even as newcomers join the industry, Lu is focused on his company's USP: "Compared to our competition, we offer automation, quality and design. Our robust technology runs the whole process automatically and its high-end design that can be integrated into any kitchen design."

And as for the future, Lu states it's just the beginning of agritech. "We are just scratching the surface, because in the last 60 years, the industry was only focusing on quantity, price, shelf life and transportability. Since organic products came on the scene, people started to understand the importance of food quality, we opened up a new horizon. Freshness, taste and nutrient value is something that [people] will follow." He dreams of having Natufia's product everywhere too. "We want to see Natufia in every home, in every school, in every office, hospital, airport. We want people to be able to experience the real taste of greens and vegetables and connect with nature on a daily basis from everywhere they are."

1. No time like today "It's always the right time for following your dreams. There are always opportunities to be taken in bad times and in good times alike."

2. It's not going to be easy "Be ready to work hard, very hard, persevere. It's no secret if you are not ready to give everything, you are just not ready."

3. Embrace failure "Be ready to fail, because you will fail at one point or another and that's ok, it's just another step to your success. Think of it as a child that learns how to walk, he/she doesn't stop when it falls down, he/she keeps doing it until they walk. Also, failing fast and being audacious to face and accept it will give you invaluable insights in accelerating further, and that's where the growth is happening."

4. Stay passionate "Do it with passion, you need to love what you do, you need to dream about it at night- this will thrust you into action every time."