With the UAE building the world's largest solar power plant in Abu Dhabi, there probably hasn't been a better time to invest in renewable energy.

By Aalia Mehreen Ahmed
September 28, 2021
Opinions expressed by Entrepreneur contributors are their own.
You're reading Entrepreneur Middle East, an international franchise of Entrepreneur Media.

With the UAE building the world's largest solar power plant in Abu Dhabi, there probably hasn't been a better time to invest in renewable energy. Unsurprisingly, many startups in the nation have taken advantage of this momentum in the move towards a sustainable future. With a similar vision in mind, Wahaj Investment L.L.C. -better known as Wahaj Solar- was launched in September 2017 with an aim to produce low-cost solar power that can be used across an array of applications. But this Dubai-based startup is looking to break through the field of solar energy in an innovative way by using a patented invention of its co-founder and Managing Director Ayman Adnan Al-Maaitah called Ayman Solar Concentrator (ASC). "The technology aims at producing low-cost solar power with storage for various applications including 24/7 modular scale electricity production, solar water desalination, green hydrogen production and solar heat for industrial processes," Al-Maaitah explains . "The ASC technology is categorized as a concentrated solar power (CSP) technology, and with the UAE establishing the largest CSP plant in the world, it made sense to me to launch this innovation here."

But all of this did not happen over a fortnight, Al-Maaitah notes. "The business started based on a deep knowledge of solar energy, including thirty years of research and development," he says. "After successfully testing a lab-scale model, a commercial scale unit was built and tested at Khalifa University's Masdar Institute Solar Platform and produced excellent results which exceeded expectations." Today, Al-Maaitah's ASC technology is patented in over 150 countries, including the USA, China, India, South Africa, as well as some GCC countries. So, it comes as no surprise that the startup has managed to stay booked and busy, despite the repercussions of the ongoing COVID-19 crisis.

"Even with the delay due to the pandemic, the company managed to acquire an international reputation which qualified it to start obtaining orders from some of the world's most famous solar energy landmarks," Al-Maaitah reveals. "Currently, the final contract for a solar water desalination plant in NEOM City at Saudi Arabia is being drafted, after the ASC technology was verified and approved with NEOM City technical consultants. The project should start execution this year with a value around US$3.5 million." 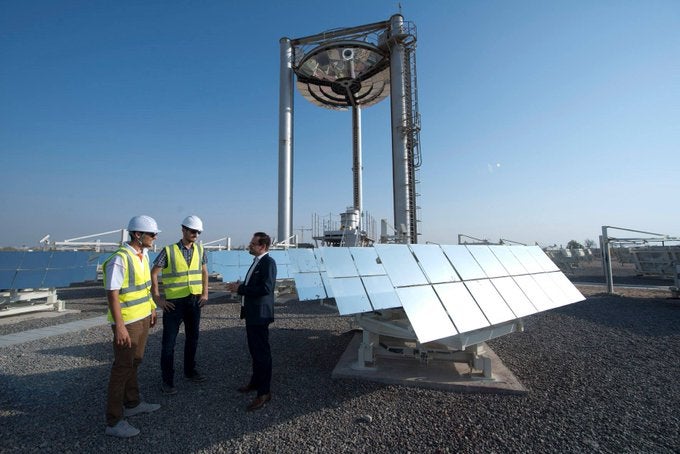 Al-Maaitah also notes that his company has also signed a letter of intent with the Jordanian Phosphate Mining Company (JPMC) to supply solar heat for its phosphate driers. "The project's expected value at Phase I is around $12 million, and for Phase II, it is $36 million," he adds. "Moreover, the company is going with a strategic relationship with the UK's Solar Water PLC for futuristic projects valued at around $100 million in the foreseeable future." With an inflow of many such multi-milliondollar projects, Al-Maaitah is clearly upbeat about the future. But the success the startup sees today didn't come without hurdles. "The largest one was to obtain funding to cover the cost of the concept pilot as well as covering the cost of living," Al-Maaitah says. "I had probably underestimated the cost of living in Dubai, and overestimated the potential to get funds for green field innovations. However, I managed to cover it up with the help of my co-founder, who is an old friend of mine."

Wahaj Solar is currently self-funded by its founders, but Al-Maaitah is hoping its success so far will entice external investors to fund his startup in the future. "Currently, as the company is showing definite commercial valuation, I hope to get investors to help the accelerated growth that the company promises," he concludes.

Your startup is a part of the Mohammed Bin Rashid Innovation Fund (MBRIF) accelerator program. How would you describe your experience with the initiative?

"The MBRIF startup program was a great opportunity for me to elevate the company's professional appearance and valuation. The program included me with a group of international startups who shared some of my challenges, and I learned a lot from them. The MBRIF team is highly professional and quite passionate about helping startups and giving them all the support they need. One of the biggest benefits from joining the program is that I learned how to present my company professionally to investors, and how to make a realistic and scientific valuation of it. I also was introduced to some interesting investors that have great potential of realizing a final lucrative output. Opportunities to be presented at an international platform is also a great benefit which I obtained from the MBRIF program. In fact, by providing many high-level services and support free of cost, MBRIF helped me greatly in reducing the operation cost of my startup. To obtain such professional help, I would have needed to spend a lot, and maybe would not have gotten the outcome that I obtained from the MBRIF program and its professional team. I will highly recommend any startup to join the MBRIF program, as this will result in huge benefits to the young startups."

Related: Why SMEs In The Middle East Should Take A Proactive Approach To Energy Management