By The Infographic.ly Team
June 1, 2017
Opinions expressed by Entrepreneur contributors are their own.
You're reading Entrepreneur Middle East, an international franchise of Entrepreneur Media.

While the sharing economy has been widely used in the past two years, it's an economic term that has existed since 2010. Many scholars and thinkers have tried to define it in different ways, from a socio-economic ecosystem to collaborative consumption, we found the most recurring ones to be: the recirculation of goods (e.g. eBay or Craigslist), the exchange of services (think TaskRabbit, the sharing of productive assets), and finally the utilization of underused assets: AirBnb, Couchsurfing, and of course, Uber. 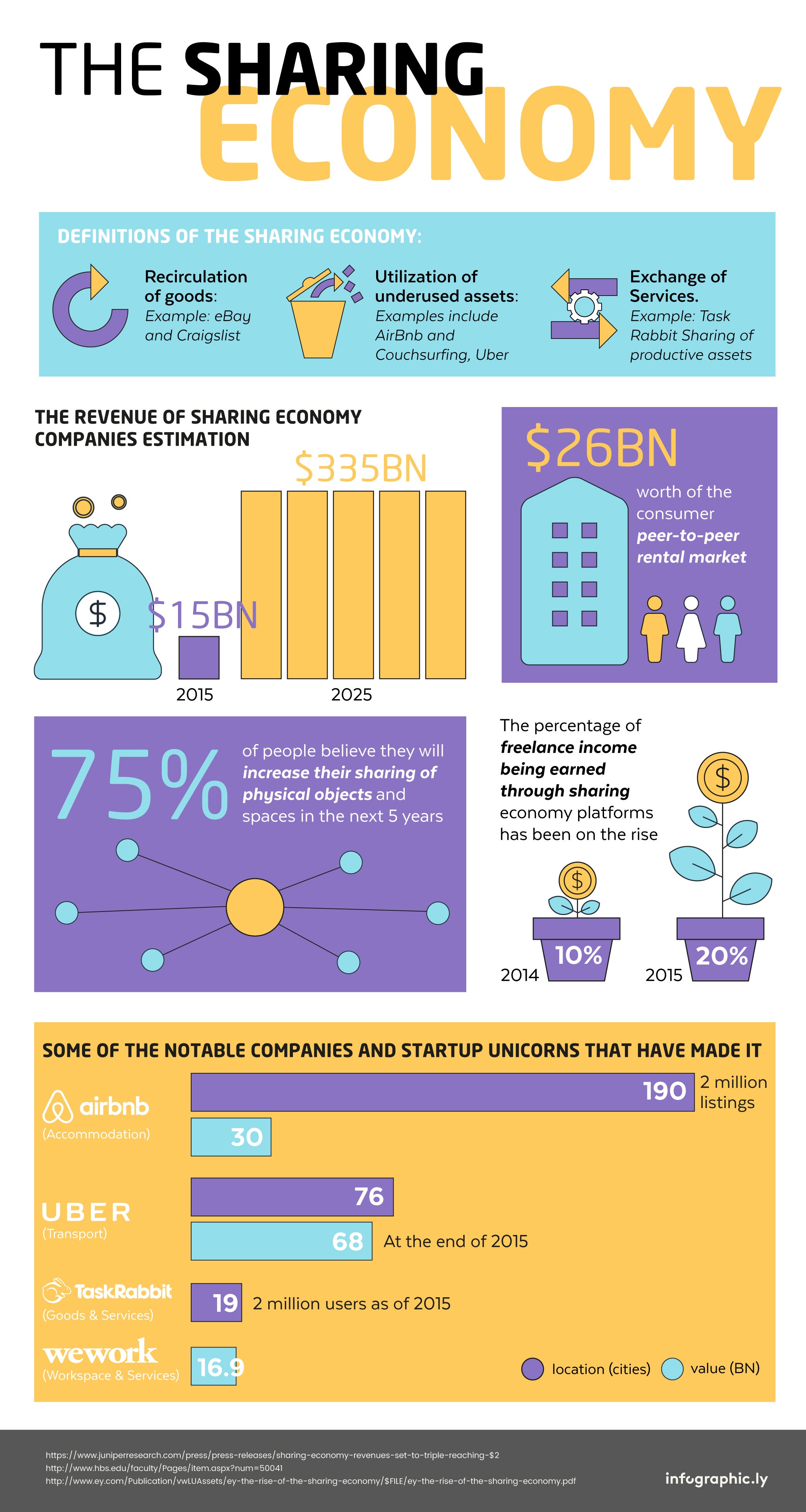 The consumer P2P rental market is believed to be worth US$26 billion today, and even more so, the revenue of sharing economy companies are expected to grow from a $15 billion in 2015 to $335 billion in 2025. And if the numbers are not characteristic enough, the sharing "concept" has now become engrained in people's psyche. Indeed, 75% of people believe nowadays that they will increase their sharing of physical objects and spaces in the next five years. We have also seen a new trend and spike in the number of freelancers; those of who have started using sharing economy "platforms" have seen their income rise from 10% in 2014 to 20% in 2015.

It's impossible however to think of the sharing economy and not think of the unicorn companies that have made it, and whose model countless startups and entrepreneurs have tried to replicate. In the accommodation sector, we have AirBnb who, as of 2015, had over two million listings in 190 countries, and was valued at $30 billion. In the transportation sector, we have Uber, which is available in 76 countries, and valued at $68 billion at the end of 2015. In the goods & services department, we have companies like TaskRabbit, with 2 million users in 19 cities. Finally, workspaces have entered the sphere with companies of the likes of WeWork, valued at $16.9 billion.

Needless to say, the sharing economy is opening up a number of interesting possibilities across different economic activities, and it is actively redefining our daily lives. The sharing economy is inherently changing the future of work, production, and collaboration, and on a personal level, changing our concept of ownership and our attachment to it.

Related: The How-To: A Guide To Working From Home