By Melissa Moubarak
October 10, 2016
Opinions expressed by Entrepreneur contributors are their own.
You're reading Entrepreneur Middle East, an international franchise of Entrepreneur Media.

Personalization, an age-old tactic used by marketers to lure us into thinking we're special. Especially in today's era of mass communication –the one-size-fits-none model– personalization remains potent. Just ask anyone who bought a can of Coke with their name on it. Digital media has opened up new ways to customize communication, but so far, most of it remains focused on demographic personalization; basically, your gender, name, and date of birth.

We are also aware now that age and gender are not accurate indicators of interest, making a purely demographic segmentation redundant. You hear that, Facebook? Just because I'm a single female in my 20s doesn't mean that I need to be served ads about "single men near you" and "losing weight fast." Or maybe that's Tinder and MyFitnessPal betraying me. The point is, consumers are more than just ad blind; in MENA, 27% of them installed an adblocker last year. 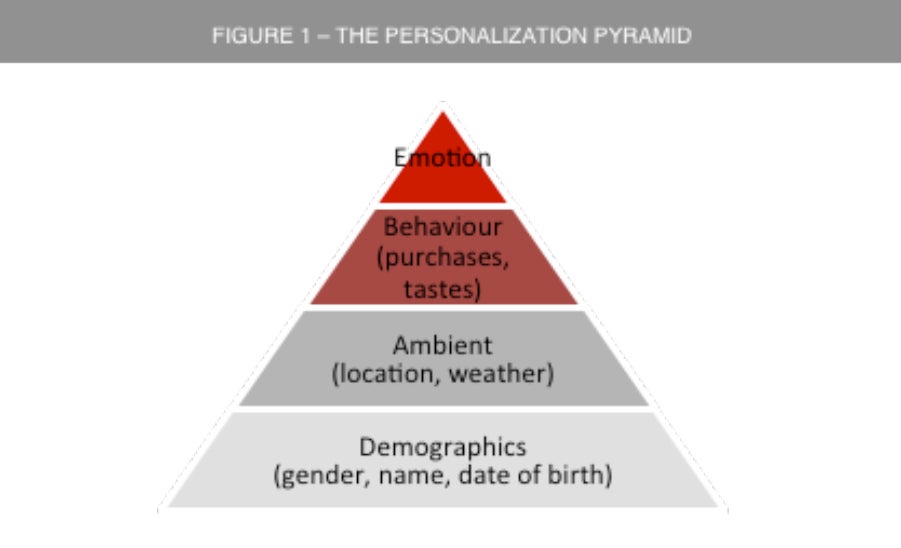 Unlike some sensationalist naysayers, I don't see the rise of ad blockers as the death of the industry. In fact, an IPG Media Labs study found that contextually relevant ads raised purchase intent by 13%. Which means that done right, behavioral targeting can make advertising useful again, seamlessly introducing consumers to products they might want or need. Or don't need, but want, like that really cool banana ice-cream maker I insist on keeping.

Beyond contextually relevant ads, the same IPG Media Labs study points out to a further 11% increase in purchase intent, this time resulting from an ad that matches the emotional tone of the content it runs before. No longer satisfied with just reaching consumers with the right message at the right time, brands that are ahead of the curve are now ensuring their consumers are in the right frame of mind. The next big thing for media is targeting emotions. Emotions are focal in our decision making process, and marketers have long tugged at our heartstrings to change behavior because emotionally connected consumers are 52% more valuable than highly satisfied consumers. But we're not talking here about a Don Draper-esque 30-second tearjerker. We're envisioning the possibility of seeding a funny influencer video when we pick up on cues that you're feeling bored.

Brands are already offering emotion-based services such as mood playlists on iTunes and Anghami; but these require active consumer input. You need to tell Movie Twist what you're feeling for it to make suggestions about what to watch, the same goes for Hoppit recommending restaurants by mood. Yet technology is quickly leading up to more passive analysis of emotional signals. Skyscanner is using Face Recognition Analysis to gauge feelings and suggest holiday destinations accordingly. Bentley is also dabbling in face recognition software to create individually designed cars. The Bentley Inspirator uses emotion metric algorithms based on data from 3.4 million faces in more than 75 countries to create a customized model car. Beyond neuroscientific cues, emotions targeting is being built upon text and emoticon use. Facebook's DeepText is pioneering a method to better understand posts, by extracting intent and emotion. Using mixed content signals like text and images, it seeks to improve the user experience and make calls to action more seamless.

A study by Canvs found emotional analysis 2x more accurate than traditional sentiment social listening. Which is why at UM, we are going beyond the positive-negative-neutral paradigm adopted by most sentiment analysis tools, social listening, to pick up on emotional cues around conversations. Robert Plutchik's psycho-evolutionary theory provides a framework for eight primary feelings from which all others are derived (Figure 2). These basic emotions are joy, sadness, trust, disgust, fear, anger, surprise, and anticipation. By associating each emotion with a set of local key words, we can target emotionally charged moments with the right type of content. 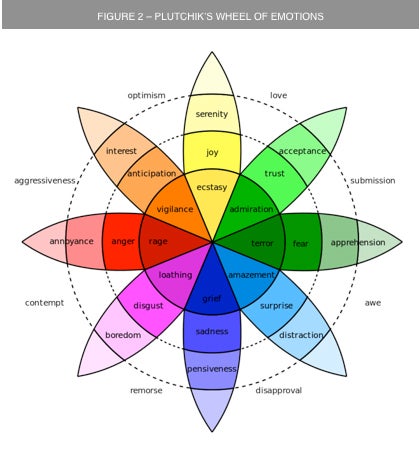 How will we monetize all this mood analysis into ad targeting? Well, Apple has already filed a patent for an ad service that targets users based on emotions. According to the filing, the system generates a "baseline mood profile" for a user. It can then infer how a user is feeling at a given moment and serve up an appropriate ad.

Mood-associated characteristics can be physical, behavioral or spatial-temporal. For example, heart rate, blood pressure, adrenaline level, perspiration, body temperature, and vocal expressions may all be used to determine a user's mood. And this is where wearables come in, extending the personalization by connecting our physical signals to the internet of things.

We are already feeding heart rate data into our phones, but a slew of upcoming emotion tracking wearables such as Thync, Doppel, and Moodmetric, indicates we can soon tap into more sophisticated emotional databases. Lightwave, debuting at the SXSW Festival in Texas, sent audience interaction metrics such as temperature and mood to the performer who then customized their live sets in reaction to the crowd's experience.

Data isn't intrinsically emotional, but people are, so we need to make it so. By leveraging a growing stream of emotional data from active and passive sources, brands should become able to craft more relevant and personalized messages. These will be targeted at the right time, when the user is in the right frame of mind. The applications of such emotional targeting will even transcend screens, moving into TV and OOH, which are increasingly becoming smart and connected. That's how media will be combining mass awareness with personalized engagement.