By Erika Widen
May 29, 2015
Opinions expressed by Entrepreneur contributors are their own.
You're reading Entrepreneur Middle East, an international franchise of Entrepreneur Media.

The German Industry and Commerce Office Qatar (AHK) is an official institution authorized by the German Federal Government and the Association of the German Chamber of Industry and Commerce (DIHK). AHK Qatar was established in 1998 to represent the interests of German organizations and associations within Doha. Norma Noun Sandawi, Head of Business Development of AHK, says, "Taking into account the interests and endeavors of the business communities in both of our countries, AHK Qatar works on achieving economic links and relationships in addition to further promoting trade, industrial, business and technical cooperation between the Qatari and German companies and associates." For this reason, AHK Qatar encourages and promotes direct contact between Qatar and German organizations, while also focusing on the SME sector, which is considered the back-bone of the German economy. "Germany is the leading location for investors in Europe, due to the economic stability coupled with the size of the market, which are key factors of ensuring a business success there. AHK Qatar additionally endorses investment opportunities and informs the general investment conditions in Germany," adds Sadawi. 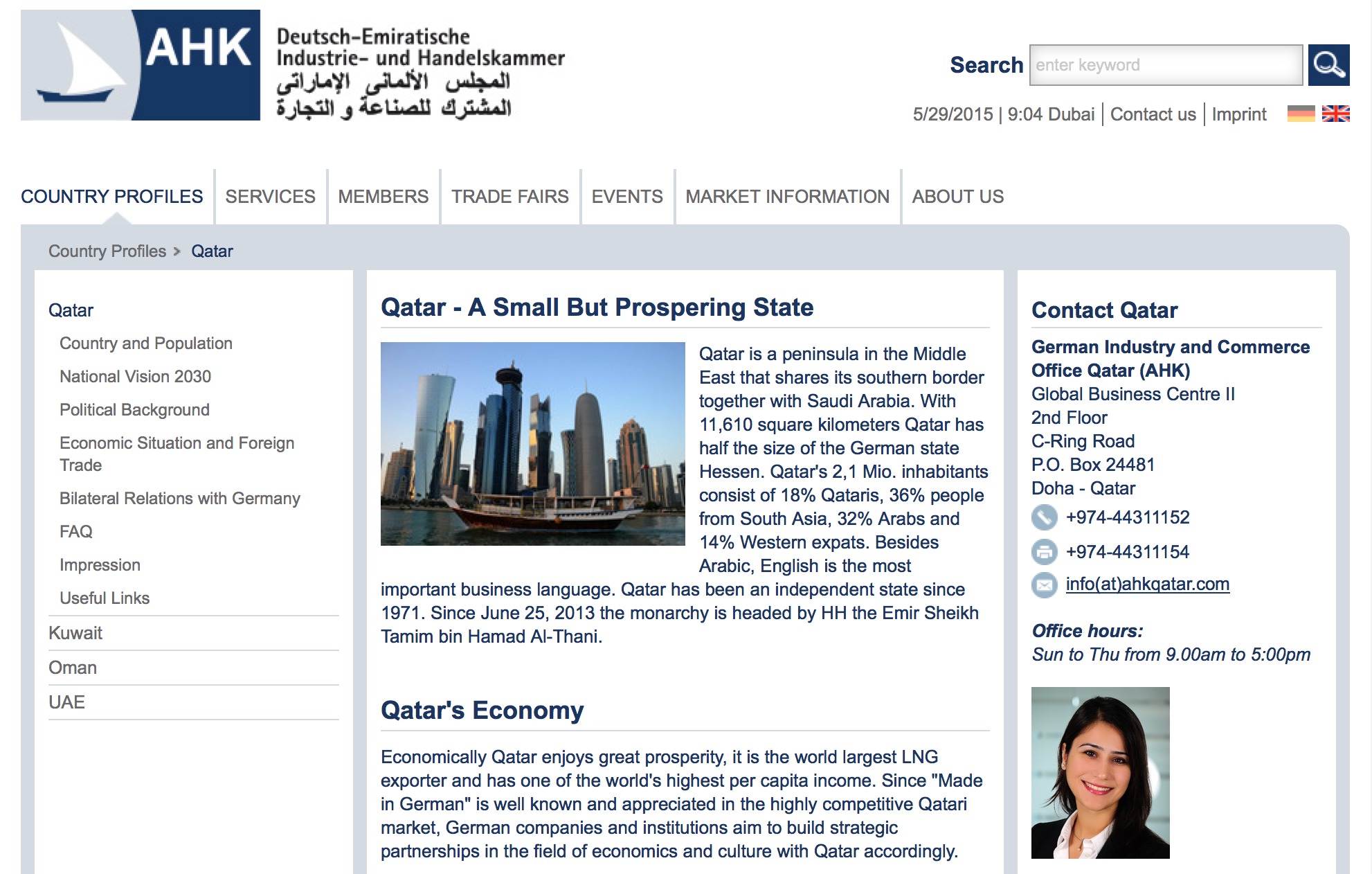 At present there are approximately 1,700 German citizens residing in Qatar and working in various sectors; in addition there are approximately 80 registered German companies in Doha, mainly in the construction sector. Qatar imports cars, spare parts, machines, chemical products, metal goods and electrical engineering from Germany; and Doha exports oil, gas and chemical products. According to Sandawi both nations have a good bilateral relationship. His Highness the Emir visited Germany in September 2014 and in March 2015, Sigmar Gabriel, Vice Chancellor and Minister of Economy and Energy of the Federal State of Germany, visited Doha. In addition, several German official representatives will be visiting Doha within this year. "Qatar offers the opportunity in upcoming projects where German companies can participate in and offer their experience. Here AHK assists German companies with the market entry such as market research, and potential local business partners," says Sandawi.

There is, however, the oft-mentioned challenge of setting up a company within Qatar and finding the right local 51% partner, not to mention offices and local hiring with the market experience. On a positive note, Qataris are keen on investing in Germany such as in real estate and industry. "Qatar Holding has shares in Volkswagen cars," adds Sandawi. In March 2015, AHK Qatar organized an SME conference in partnership with the Qatar Chamber of Commerce, which showcased small and medium sized companies, in addition to family businesses from Qatar in Germany. "AHK has a good local network and knows which local companies are interested in German partnerships and in which sectors."

Google Analytics 4 Rolls Out Next Year. Here's What You Need to Know Now and How It Can Help Your Marketing Efforts in the Future.