Sophisticated Indulgence: M'OISHÎ Founder Carole Moawad On Building A Bridge Between Japan And The UAE

By Tamara Pupic
July 29, 2019
Opinions expressed by Entrepreneur contributors are their own.
You're reading Entrepreneur Middle East, an international franchise of Entrepreneur Media.

When it comes to brand loyalty, Carole Moawad, founder of Dubai-based M'OISHÎ, has set a new standard for fans of mochi ice cream around the world. For the uninitiated, mochi ice cream is a novelty Japanese dessert that wraps varied flavors of ice cream in a layer of mochi, a traditional Japanese sticky rice dough that is considered to be a symbol of good fortune- a concept that Moawad first tried during a vacation in Beirut, Lebanon, a few years back. Instantly, she became not just a good enough customer and a raving fan, but this also led her to become the founder of the first (and so far, the only) factory of the Japanese mochi ice cream concept in the UAE: M'OISHÎ. Originally Lebanese and a chemist by education, Moawad moved to the UAE in 2014 to take up a series of posts in some of the country's healthcare institutions.

However, after the fateful holiday back home in 2016, she found herself ready for a career shift. "I quit my job when I opened the first shop, which was the first proof of potential success," Moawad says. "However, quitting a career is not an obvious and easy step. If someone is not passionate enough about their new idea, quitting their job will take a toll on them sooner or later. This step has to be backed by a strong belief in the idea, a lot of passion, and commitment to be persistent at all times, which will require a lot of sacrifices. As long as the entrepreneur has the required character to commit to the latter, than he/she is ready to quit." Upon her return to the UAE, Moawad realized that while mochi ice cream was sold in restaurants across the country, it had always been imported. In 2017, she teamed up with three silent partners to launch M'OISHÎ -the first brand that manufactures mochi ice cream in the country– using only ingredients from the UAE and Japan. Its name derives from the Japanese term oishi, meaning "delicious," while the "m" was added on as a reference back to mochi. 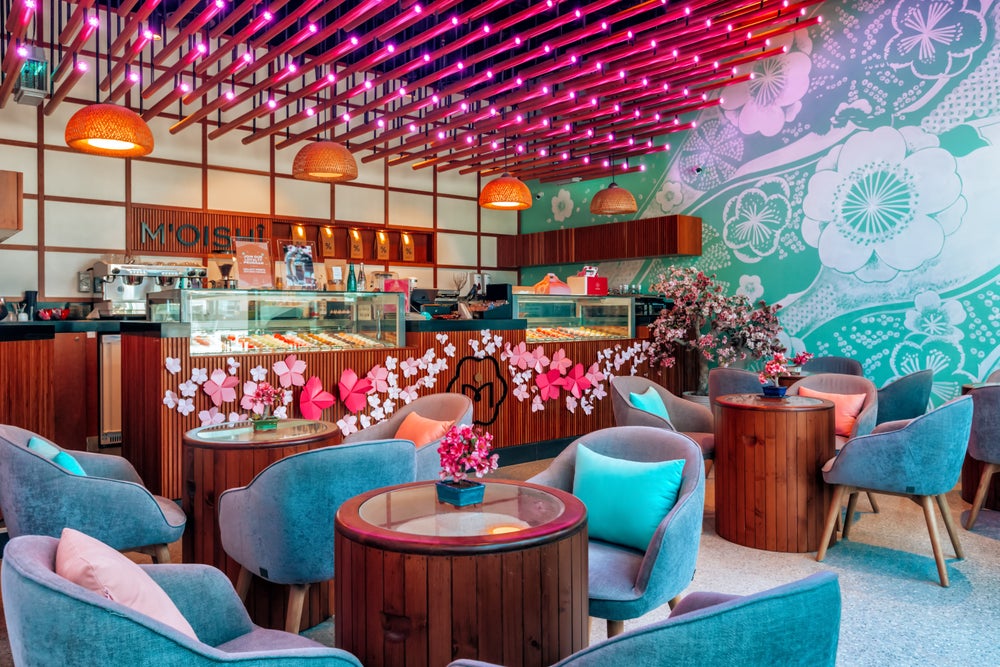 The initial few months of M'OISHÎ, Moawad explains, were incredibly difficult and challenging, and included her experimenting with a variety of flavors and recipes at her own home, carrying out photoshoots at her partner's house, partnering with a startup agency in Lebanon for all branding materials, but also trying to overcome rent related problems, and figuring out the UAE's laws and regulations relevant to her and her enterprise. "This adds significant hidden cost, and consumes a lot of time," she says. Nevertheless, since opening the first M'OISHÎ store in City Walk, Dubai, in March 2017, Moawad has expanded M'OISHÎ to 13 concept cafes across the UAE, with one franchise in Saudi Arabia, proving that the GCC region was a good target market for this kind of concept. "The concept resonates with an economy that supports high revenues, leisure time, and sophisticated culinary taste," Moawad says. "Our unique selling proposition is "sophisticated indulgence,' therefore we have created a concept of adding mochi ice cream and its subsidiaries to people's lifestyles with the supported logistics, along with a strong brand to introduce it."

When it comes to franchising one's business, Moawad describes it as a critical and sensitive expansion model that can go either way. "Our approach when it comes to choosing the franchisee is targeting medium size players with broad experience in F&B and franchising," she says. "It is very important to choose a partner/franchisee who has already run another successful franchise, or has a record of successful franchisees, because choosing the wrong or the right partner can ruin or elevate your brand." And for those eyeing the Saudi market, Moawad adds a sound piece of advice. "Spend enough time and resources to choose the right partner and franchisee," she says. "Don't count on the contract; this won't save you in case things go complicated in Saudi Arabia. Good intentions and a professional partner are your only guarantees." Looking to the future, there are three items on Moawad's agenda: expanding into Kuwait and across the rest of Saudi Arabia, launching a distribution channel to Lebanon and Egypt, and developing a Japanese café concept. Undoubtedly, all three will be crossed soon.

1. Know your customer well (and never take them for granted)
"UAE residents are well exposed and, therefore, they are hard to please. To keep innovating is a crucial sustainability component."

2. Dubai is not the only Emirate in the UAE
"You will be surprised how much benefits you would get from Abu Dhabi, and the rest of the country."

3. Go with the experts when it comes to franchising
"Work with consultants and/ or employees who have done franchising concepts many times before."

4. Keep in mind that the franchise model is not set in stone
"It can be amended based on the country, the franchisee, and the momentum. Be generous with the manuals and the franchise contract."

5. Always be on top of your finances
"Don't underestimate hidden costs of permits and HR related expenses."