The intention of this timeline is not to applaud Oyo for its success. Enough has been said and done. The real motive of this article that traces the journey of Oyo is to look in wonder at its meteoric rise, in an exceedingly short span of time, from being a hotel-chain start-up pursued by an 18-year-old college dropout to becoming an Asian obsession and gradually make its way into the international market.

How it all Started

2011- Ritesh Agarwal, an 18-year-old college dropout, seemed to harbour dreams of entrepreneurship which compelled him to take the plunge with his first start-up Oravel. Oravel enabled listing and budget accommodation of hotel rooms and it, later on, got converted to become Oyo rooms.

2013- Agarwal was also selected for Thiel Fellowship, a 2-year-old program started by the founder of Paypal which gave him funding of $100,000 to pursue and make real the idea of his start-up. Oyo was launched in Gurgaon.

2014- In August of this year, Oyo received its first Series A funding.

Becoming the Face of Indian Start-ups

2015- In March of this year, Oyo received funding of a whopping amount of $25 million from its investors namely Lightspeed India, Seqoiua and others.

April 2015- Oyo app was launched. The mobile app was a catalyst in writing the success story of this hotel chain start-up that was to follow. It is a user-friendly app that helps customers to book rooms directly. Oyo, by now had expanded to Kolkata, Mumbai, Goa, Bangalore and was spreading at a massive pace. It has almost come up to 2000 hotels, 20,000 rooms and 100 cities in India.

July 2015- Oyo bagged $100 million in Series C Round of funding from Japanese investor SoftBank. This year proved to be a financially fulfilling year. Oyo now had the backing of one of the most prominent and powerful investors in the world.

2016- In January, first month of the year itself, the hotel chain hit the 1 million check-ins mark and also made an advent outside India into the Asia Pacific market, beginning with Malaysia.

2017- Continuing its expansion aspiration, it launched a business in Nepal. Nepal and Malaysia was just a hint of the monstrous development that was to follow.

Conquering the Asian Territory and Stepping into the International Markets

2018- This is the year that marked the establishment of the Oyo empire in Asia-Pacific and kick-started international proliferation by establishing operations in UK, UAE, Dubai, China, Singapore and Indonesia. It also became a unicorn in September when it raised funding of $800 million from SoftBank and already had raised $200 million from its existing investors.

2019- With the backing of Greenoaks, Sequoia India, Lightspeed India, Hero enterprise and China Lodging Group as its solid group of investors, Oyo is not far from becoming a global success story, perhaps to some extent it has. Today it has more than 330,000 rooms in 500 cities globally. And Agarwal, still young and who has a long way ahead plans to make it the world's largest oldest chain by 2023! 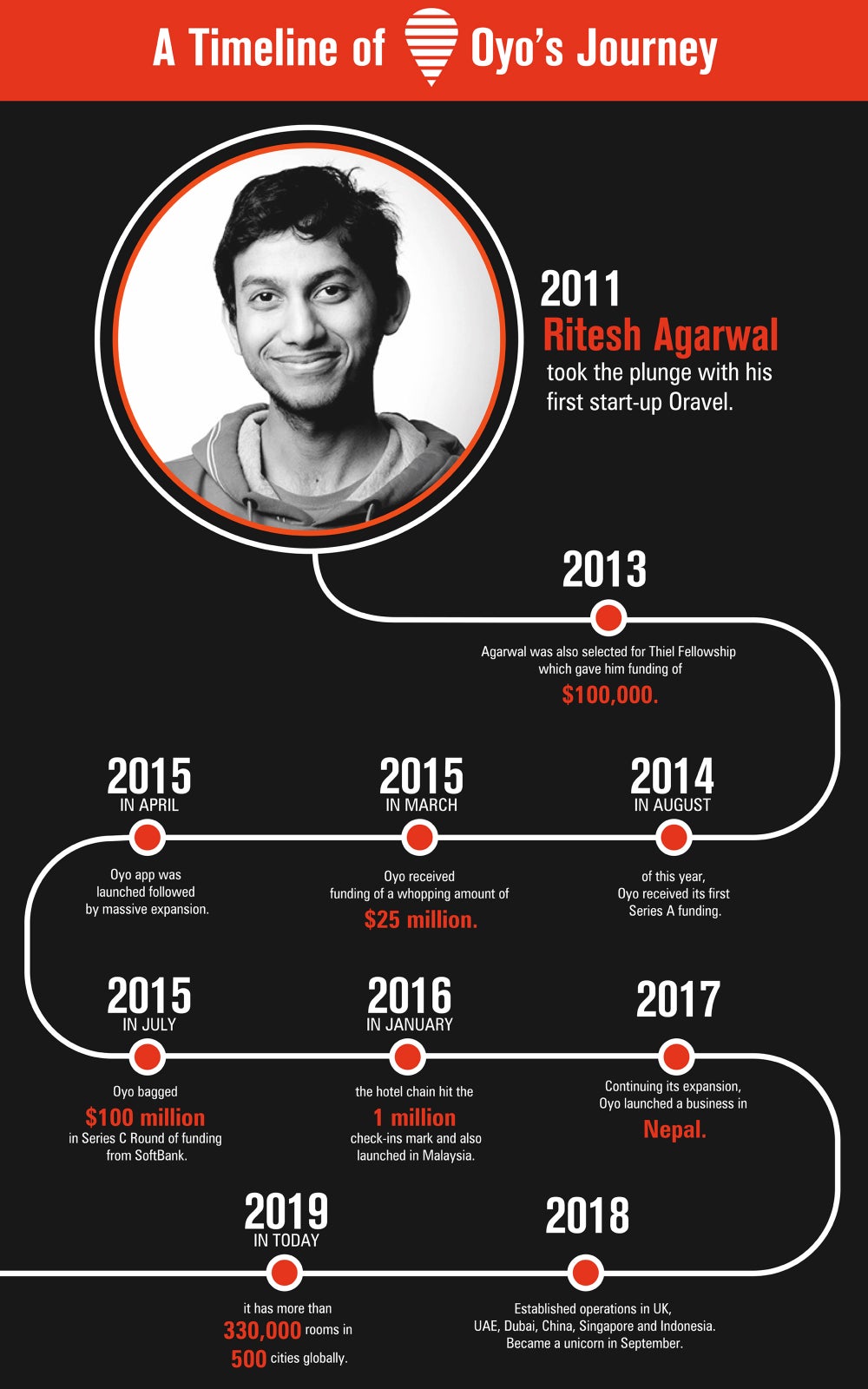