North America and China to continue to represent majority of revenue

The growing popularity and viewership of esports across the world has given rise to plenty of leagues and tournaments over the past few years. So much so that the global esports revenue is expected to hit $1.1 billion this year.

According to predictions from leading analysts at market research company Newzoo, the esports market will for the first time exceed the billion-dollar revenue mark, a year-on-year growth of 26.7 per cent. Newzoo's "2019 Global Esports Market Report" estimates the global esports audience will grow to 453.8 million worldwide in 2019, a year-on-year growth of 15 per cent, and will consist of over 200 million esports enthusiasts and more than 250 million occasional viewers. As the esports market matures and the number of local events, leagues, and media rights deals increases, we anticipate the average revenue per fan to grow to $6.02 by 2022, the report says.

"Esports' impressive audience and viewership growth is a direct result of an engaging viewership experience untethered to traditional media," says Newzoo chief executive Peter Warman. "Plenty of leagues and tournaments now have huge audiences, so companies are positioning themselves to directly monetize these Esports Enthusiasts. While this began happening last year, the market is constantly expanding on its early learnings. The result: 2019 will be the first billion-dollar year for esports, a market that will continue to attract brands across all industries," he adds. 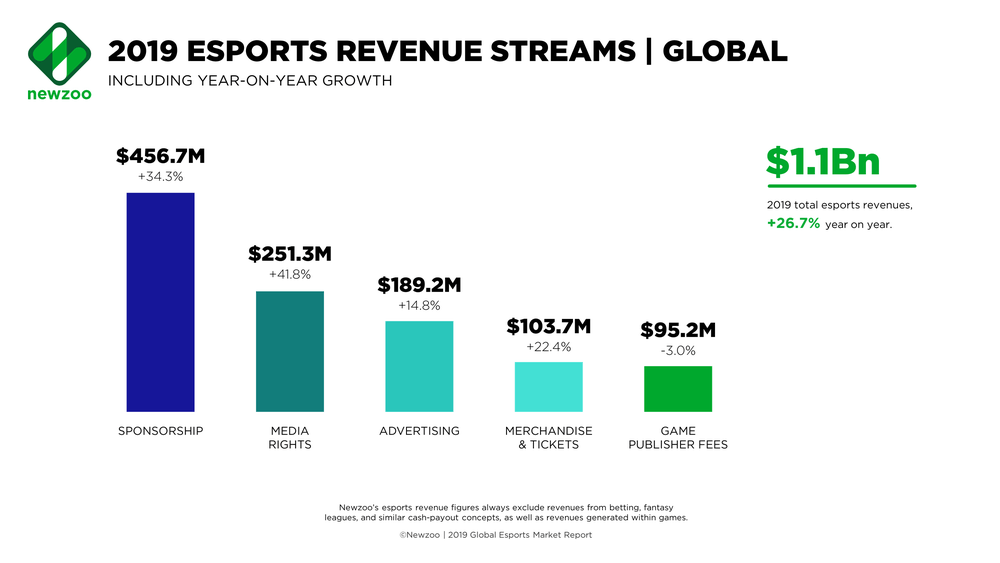 Investment is the Driver

Besides non-endemic brands, digital broadcasters and TV media companies have already started to compete for esports content and the extent to which these deals will generate a direct return on investment will impact the pace of media rights growth. Other ongoing developments that have high revenue potential include increased esports franchising, new content formats and premium passes, the success of mobile gaming, team profitability, and the success of new focus on professionals and streamers as brands.

Considering the current growth, Newzoo estimates the esports market will reach $1.8 billion by 2022. If any of these factors accelerate, a more optimistic scenario places revenue at $3.2 billion, it says.

As per the report, China will generate $210.3 million in revenue this year, overtaking Western Europe as the second-largest region in terms of revenue. The country is notable for the growing popularity of mobile esports, including casual titles.

North America, meanwhile, will once again be the largest esports market, with revenue of $409.1 million. The report predicts that it will show strong growth toward 2022, reaching $691.1 million. The largest share of North America's 2019 esports revenue will come from sponsorship, at $196.2 million. Meanwhile, media rights will contribute most to this growth and will remain the fastest-growing and second-largest esports revenue stream in the region.