The insurtech startup has raised US$7.3 million from Hong Kong's Ion Pacific

By Dipen Pradhan
May 28, 2019
Opinions expressed by Entrepreneur contributors are their own.
You're reading Entrepreneur Asia Pacific, an international franchise of Entrepreneur Media.

Singapore's citizens are automatically signed up with MediShield Life, a government-sponsored health insurance plan, but is limited to basic public hospital treatment. At the same time, the cost of healthcare has been touching new heights, which has forced many citizens to turn their attention towards insurtech companies that provide an array of insurance services, which are more accessible and affordable.

One such insurtech startup, Singapore Life, has raised US$7.3 million as part of its ongoing Series B funding round from Hong Kong-based investment and merchant bank, Ion Pacific, with participation from existing shareholders — American insurance company Aflac and Scottish investment company Aberdeen Standard Investments.

The startup last picked up US$13 million minority equity investment in January from Aberdeen, and US$20 million from Aflac in December 2018, for its ongoing round. In total, the five-year-old startup has raised more than US$90.3 million, according to Crunchbase.

Singapore Life has not yet revealed its plan to utilise the latest fund, and its response could not be elicited at a time of publishing this report. However, the startup was last reported to have been expanding its services to the Southeast Asian market as well. It reportedly sold insurance coverage worth $4.8 billion, as on December 2018.

Meanwhile, the investment on Singapore Life also helps Ion Pacific to expand its growing portfolio of finance and digital businesses in Southeast Asia. The merchant bank was founded in 2015 by Itamar Har-Even and Michael Joseph, and has offices in London, Dallas, and Tel Aviv. Its tech-focused structured secondaries' fund generally invests in startups from around the world, with a focus on Israel and Asia.

There is no dearth of insurtech startups in Singapore. Another startup, CXA Group, has also been making all the right noises gathering investors' interest, while making insurance more accessible and affordable. Three months ago, the startup raised $25 million for expansion in Asia. As on March, the company was reportedly working with 600 enterprises with a team strength of 200. 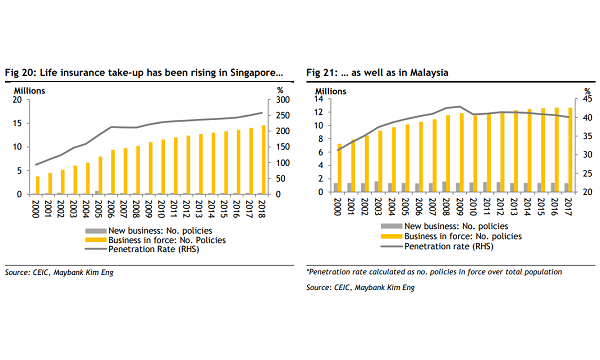 Singapore's cost of healthcare has increased by 9.1 per cent in Q1 2019, a survey by risk management company Willis Towers Watson suggests.

In such as scenario, Singapore's life insurance industry's new business premiums has surged 1 per cent year-over-year (YoY) to $937.2 million in Q1 2019, as per another data from the Life Insurance Association. The same report says that Singaporeans and permanent residents (PRs) covered by IPs grew by 68 per cent to 2.74 million during that time.