India is known for its diversified capabilities and incomparable economy markets. Ever since we know economy, it travels through the thrust and crust carrying nation's financial growth. Our honorable governments till date have left no stone unturned in rising up the country's economy structure and the new input in the entrepreneur world by the government started in 2016. It introduced National Entrepreneurship Awards in 2016 and since then, it has been continuing the journey to boost up the new business' minds and the nation's economy graph simultaneously.

What do These Awards Have For the Nation's Entrepreneurs and Economy Podium? 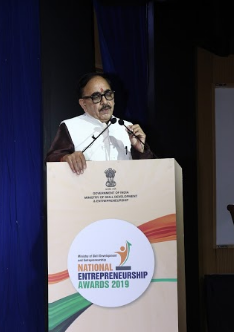 Dr.Mahendra Nath Pandey, Minister for Skill Development & Entrepreneurship, said, "This year marks the fourth year of running the National Entrepreneurship Awards, and I am gratified by the continued interest of the entrepreneurs in the initiative. Prime Minister Narendra Modi's vision to skill every Indian and encourage the youth towards entrepreneurship has enabled us to launch many such initiatives.

Hon'ble Minister further added"It is heartening to know that our initiatives to involve every part of the country, in our skilling efforts, are delivering on the ground. I look forward to the award ceremony on November 9 where we will get the chance to recognize the top contributors and celebrate their achievements through a milestone event."