A pioneer of the Indian angel financing ecosystem, Mirchandani founded the Mumbai Angel Network in 2006 to support early-stage ventures. Through the years, the platform claims to have made over 200 investments and over 100 exits

It was the 1965 romance-war classic Doctor Zhivago that inspired Sasha Mirchandani's mother to bestow on her son the homely variant of a most illustrious name. In Russian, 'Sasha' is the somewhat informal shorthand for the Greek name 'Alexander'—literally, the defender of men—that has historically been most well-borne by Macedonian military commander Alexander the Great.

A modern-day chief, Mirchandani today heads early-stage investment fund Kae Capital as its managing director: assessing tech geniuses' business ideas, raising money from wealthy investors, and consulting a team of partners before closing deals form the order of his 12-hour work days. True to the unaffected majesty inscribed in his name, he appears to do it all with passion unalloyed with the kind of ceremony that sometimes accompanies his rank. "Too much self-importance in life is a recipe for disaster. Anyway, it's the entrepreneurs who build everything. I just give them the money to live their dreams," says Mirchandani.

The duality suggested by his name plays out in other aspects of his identity as well: Having begun his career at father Gulu Mirchandani's 80s and 90s aspirational TV brand Onida Electronics, he is an established family business' direct beneficiary who gradually struck out to pioneer the country's angel financing ecosystem, consequently becoming an entrepreneur in his own right. Similarly, Mirchandani's business acumen owes as much to his immediate social ethos—the Sindhis are one of the world's largest trading communities—as to his cosmopolitan life, first as a college student at Strayer University in the US and later as a professional travelling across the world.

Much like most astute businessmen, Mirchandani uses these binate influences to his advantage; a case in point: restaurant reservations are made under his last name in India and first name abroad, sparing many a host from a night-long struggle with syllables.

An Angel Is Born

In 1996, US-returned Mirchandani joined Onida Group, his father and uncle's company, as an ordinary salesman in the Mumbai branch, selling television sets and washing machines to various local electronics stores as he went head to head with competing salesmen. In stark contrast, most of his peers had returned to India after graduating overseas to join their large family businesses at senior positions, such as directors and CEOs.

"I thought it'd be the same for me but dad had different plans. He wanted me to go through the grind," says Mirchandani, recounting his early experiences of riding the infamously jam-packed local trains in Mumbai and learning to acquiesce to the hustle involved. Accustomed to the gentile manners of the moneyed class in Washington, D.C., he claims to have spent the next few years at Onida as an ordinary employee with limited resources, working to climb up to more managerial posts and appreciating the struggle involved. "If I hadn't seen such a life first-hand, I could never empathise and respect what people working for me bring to the table. I wish more parents would put their kids in lower positions for years of training rather than just making them the boss from day one," he says.

It was over a coffee with his father in 2001—after some five years of working in the family business and observing India's entrepreneurial ecosystem—that Mirchandani first expressed his dissatisfaction with the unavailability of capital for businesspersons in the country. "My father, who graduated from BITS Pilani in the 60s, had taken a great risk to start a business from scratch at a time of no external funding—venture capital or private equity. Twenty years later, the situation hadn't changed," he explains as he recounts convincing Gulu Mirchandani and another board member at Onida to invest some of the company's money into a venture run by young graduates from IIM Ahmedabad. "Dad, it's 2001; we've got to support entrepreneurs," he had said then. 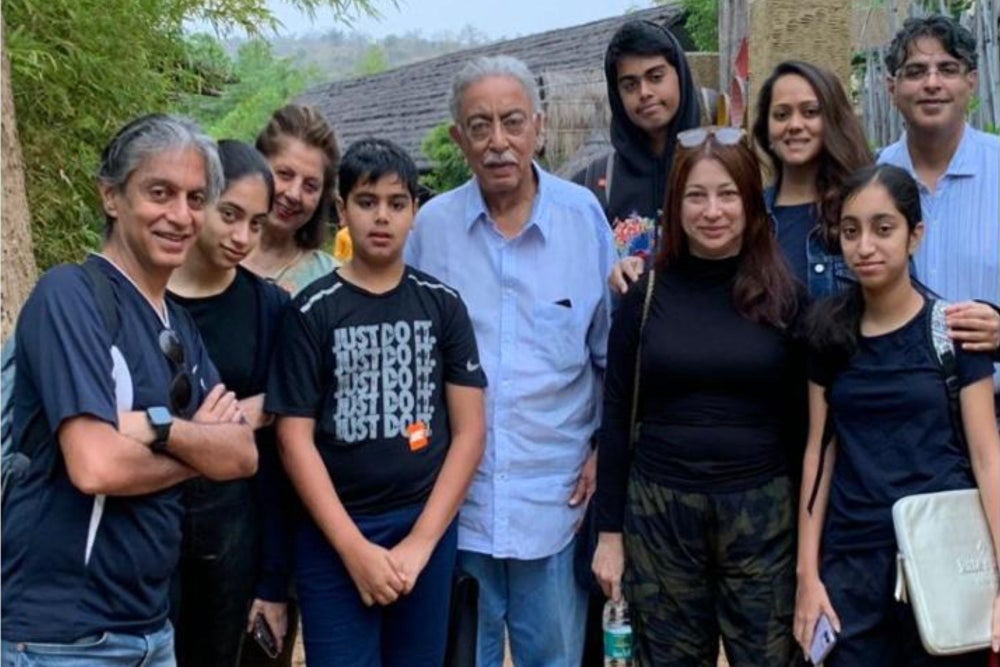 Mirchandani with parents Geeta and Gulu Mirchandani and other family members

Between 2002 and 2005, the Mirchandanis made several more investments under a new entity wherein the father acted as the limited partner (LP) providing capital and the son acted as the general partner (GP) managing funds. Angel investing is a risky business, much riskier than lending money. Naturally, it wasn't easy to get onboard the family patriarch, one who had made his own fortune rather than inheriting it. "Dad had his trepidations but he understood my thinking: this wasn't about leaving money on the roadside but empowering future Gulu Mirchandanis to actualise their potential," reveals Mirchandani. According to him, while these investments weren't made to make money, on paper, they made their investors "ridiculously" richer.

Incidentally, it was over a cup of coffee again—this time with close friend Prashant Choksey—that Mirchandani had another epiphany: "Tired of taking money from our fathers, we both wanted to continue angel investing on our own; so we thought, why not join an angel club and pool our capital to offer smaller ticket sizes, somewhere between INR 10 to 15 lakh?" Although the two would later surprisingly discover the complete dearth of any such clubs, the seed for an upcoming partnership had already been sown. Thus, in 2006 was incepted the Mumbai Angel Network, one of India's earliest angel investing platforms for early-stage ventures. Through the years, the platform claims to have made over 200 investments and seen over 100 exits and next rounds, earning 35 per cent IRR (internal rate of return) on average. Over the next three to four years, Mumbai Angels targets to invest INR 500 crore each year into Indian startups, told co-founder and current CEO Nandini Mansinghka to BusinessLine in April 2022.

Towards the tail end of his time at Onida—now as the head of corporate affairs and new business—Mirchandani met an Indian-origin US-based venture capitalist as part of a routine business meeting. Telling the new acquaintance all about his side gig of angel investing, he unknowingly made an impression on the gentleman, who would later recommend him to VC firm BlueRun Ventures or BRV (formerly Nokia Venture Partners) for running their global business in India. "I was totally shocked at being approached for the job. I didn't even know it existed. Although my father had always told me to do my own thing, he advised me then to apply for the job, saying that the experience of working outside the family business would be priceless," says Mirchandani.

After being flown to California for several detailed interviews before the entire partnership, BRV offered him the job. "Midway through my career, I was leaving both my family business and entrepreneurship in general to work for someone else as an ordinary employee, albeit a senior one. Usually, it's the other way round for most people," he continues, adding, "Best decision I ever made," with regards to joining the billion-dollar fund in 2007 as its India head. Although his weekends were still reserved for Mumbai Angels (for which he had sought special permission from his new employers), Mirchandani now made investments professionally, writing early-stage startups cheques worth six to ten million dollars.

Working alongside intelligent colleagues at BRV, he gained familiarity with the best practices—meetings hundreds of potential investors, filing paperwork, compiling reports and analyses, conducting regular calls with portfolio companies and so on—involved in running a VC fund. He incorporated these insights into Kae Capital, with whose founding in 2011, Mirchandani's transition to venture capitalism was complete. Over a decade on, Kae is in good shape, perhaps due to the caution and patience its founder has learnt from past mistakes (sometimes others', sometimes his own) of investing in hot markets at unjustified valuations. Last month, the firm closed its third fund with a corpus of $96 million, which will primarily be invested in fintech, SaaS (software-as-a-service), consumer tech, B2B (business-to-business) commerce, healthtech, direct-to-consumer (B2C) brands and gaming startups.

Although Mirchandani sometimes dislikes the bureaucratic nature of running a VC fund, he is more than compensated for it by the young and interesting entrepreneurs he meets every day. "We empower extremely smart people to create something from nothing. Of course, many of the companies we invest in will die, but the ones that do make it through...quite amazing to see their names on billboards or read about them in Forbes. For instance, I was the first investor in Myntra, which is over a ten billion dollar company today. I laugh when I think of its first review and board meetings being held in (founder) Mukesh Bansal's house. It's amazing how much it grew in just 10 to 12 years," he says. In an old interview with Financial Express, he expressed gentle regret about exiting the online fashion retailer prior to its merger with Flipkart and missing out on the resultant opportunity of earning even more money out of the investment.

When all is said and done though, it is this thrill of having recognised success potential in a business venture back when it was just an idea that keeps 50-year old Mirchandani motivated all these years later. After all, in a business of such ebbs and flows, where good returns on investments are perennially underscored by missed opportunities, one must be in it for something larger—the entrepreneurial spirit itself—than money alone to survive in the long haul.

A new series by Entrepreneur India that aims to unpack the inner workings of the Indian startup ecosystem by following the intertwined personal and professional journeys of those who people this world. Our aim? To piece together the 'real' success story of how a startup is built from scratch.

5 Reasons Why Delegation is a Must for Entrepreneurs

To successfully scale a company, entrepreneurs must let go of the responsibilities and tasks they do themselves.