Instead of Banning Amazon & Uber, Let's Create a Stronger Ecosystem in 2017

"Last year we continued our firm belief in free markets and unanimously voted against anything that threatened the level playing field."

In 2016, the world seemed to be looking inward (e.g. Brexit, Trump), it's great to see that we Indians managed to remain a liberal lot.

Last year we continued our firm belief in free markets and unanimously voted against anything that threatened the level playing field. We shot down clever monopolistic ideas such as Airtel Zero and Facebook FreeBasics and became even more loyal fans of global companies such as Amazon, Starbucks & Uber. In fact, we didn't even bat an eye lid before trashing the arguments for government support by two of our most successful entrepreneurs - Sachin Bansal from Flipkart and Bhavish Aggrawal from Ola.

In 2016 we proved it again - we understand that while protectionism may help our businesses in short term, it would make them incompetent in the longer run and will deprive us of the world class products that delight consumers and inspire our entrepreneurs.

Yes, this belief began to get challenged in 2016, mostly by the people who faced the heat from the global companies and wanted India to protect local companies like China. But the truth is that doing this will tilt the level playing field and will inefficient monopolies by local companies – like those in China where companies such as Tencent, Alibaba, Baidu rule the roost. If we had gone that way, I don't our companies such as Paytm, Flipkart and Ola would have been as strong as they are today due to lack of competition.

That said, the protesting voices do have a valid point. While we invite global companies to India, we also need to make sure that our local companies are ready to compete with them.

Because if not, then the whole purpose of "fair competition" will be lost. Instead of monopolies by local companies we will end up creating monopolies by foreign companies. This is not new – we already have markets in which global companies dominate completely. And this trend is only becoming stronger – while giants such as Facebook, Google, Microsoft and Amazon expectedly dominate the India market, there are other foreign companies too such as Slack, Dropbox, Snapchat and Airbnb, that are following fast. And there are tons of companies that will likely such as Netflix, Spotify, Stripe, Trello, Intercom, Medium, AngelList & ProductHunt.

This trend is a cause of worry but is easy to understand. Unlike a lot other people who blame the weak visions of our entrepreneurs for this, the truth is that we simply don't have the supporting ecosystem to create world class startups. We still don't have the 3 basic ingredients — easy access to capital, availability of experienced talent and a mature ecosystem that offers mentors, initial adopters, supportive social fabric, better infrastructure and a strong legal system.

Thanks to the last 5 years, we have progressed on all these 3 factors. Our startups such as Housing, Snapdeal, Flipkart, Ola, Paytm and 50 others were able to attract funding and there is more startup talent available in the country too. But the ecosystem still remains a challenge.There are many stakeholders who are trying to do that, but clearly we need to increase the speed building it further.

The biggest opportunity missed here seems to be getting contributions from startups themselves. They often see themselves as only the "beneficiaries" of this ecosystem — not as a potential "benefactor". Unlike the bigger startups in China that actively invest or partner with other startups in many different sectors (such as Tencent going out of the way to help Didi Chuxing) those in India seem to have much narrower focus to do so. Take a look at Alibaba's investments in different sectors recently: 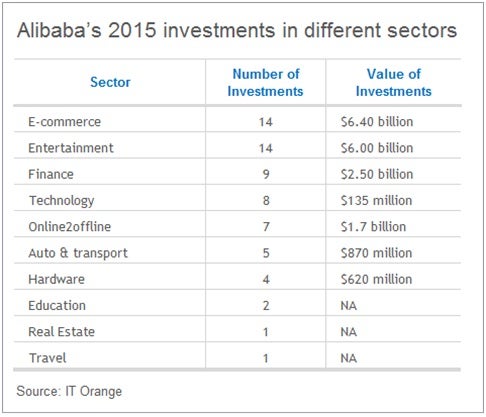 In contrast, contributions from Indian startups mostly come in the form of small angel sums or pep talks by their founders in their personal capacity.

However, let's get it straight - supporting other startups is not a responsibility of only the bigger startups. There are thousands of startups who could pool their resources to build a strong ecosystem. They are often too internally focussed and are uninterested to do simple things that could help the ecosystem. They could be early adopters of other startups, mentor young entrepreneurs, promote them in their marketing channels or provide office space to others.

To give a small example, at our startup, when we research products or services to buy, we make it a point to check the Indian alternatives available. If they offer desired quality of service at similar price, we try them out first. Today we use Sendx (instead of customer.io), Pepipost (instead of Amazon) and SendOTP (instead of Twitter Digits).

Nikunj is a founder at www.cutshort.io, a fast growing AI based platform for top professionals to connect with each other.