Reality of the Incidence of Depression & the Role of Managers

The burden of depression and other mental health conditions is rising globally.

It will be no surprise to most readers that the reported incidence of depression is on the rise. Statistics show that depression and its more critical consequence of suicide in India and globally is increasing at an alarming rate.

· Globally, an estimated 350 million people of all ages suffer from depression. 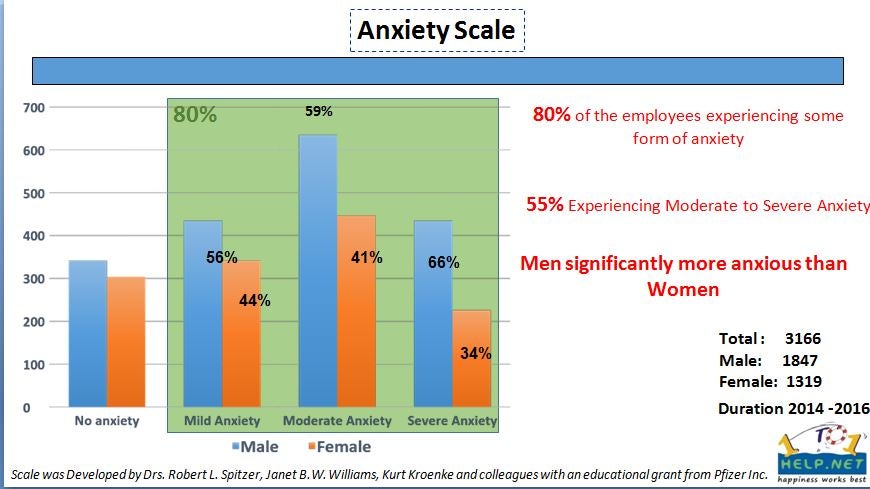 The burden of depression and other mental health conditions is rising globally. It is estimated that at least 1 in 5 Indians experience depression and the numbers in some of our metros such as in Mumbai, the incidence is as high as 1 in 3. (Research was cited during the World Mental Health Day at NIMH, Secunderabad)

People working in factories seem to experience mental health disorders in higher numbers with the incidence ranging from 14 percent- 37 percent ( NIMH) and 20 per cent of our working population showing signs of depression. Additionally 42.5 percent of corporate employees to suffer depression, according to ASSOCHAM.

1to1help.net Pvt Ltd. India's pioneer and leading provider of Employee Assistance Program (EAP) Services has researched its counselling and resources usage. This is done to derive learnings to drive initiatives that would enhance wellness in employees working in multinational corporations, and encourage help-seeking behaviours.

Of the 5,500 employee users who voluntarily took the online "Depression Test", the results revealed the incidence of depression is 55 per cent. Another research on "Anxiety Test" takers, (3,800 employees/users) the results showed that over 80 per cent experience some form of anxiety with 55 per cent being moderate or severely anxious.Overall, of the resources available on their website, 1to1help while tracking its usage says that the highest number of individuals utilized resources in the area of mental and physical health. This clearly indicates that increasing numbers are experiencing the impact of unmanaged stress and seeking actively to understand and implement strategies to alleviate the distressing symptoms.

So, why is there increased incidence of mental health concerns?

Research points in the direction of increased stress, combined with a breakdown of traditional support systems, lower resilience, ignorance of early warning signs of increased distress, and mental health in general, paucity of treatment resources, and the quantum and pace of change in our socio-economic and cultural subsystems.

Coming to the incidence at workplace, mental health experts at 1to1help.net to point out the alarming increase in the number of people thinking about /attempting suicide, with the numbers going up from 2.1 in 2008 to 8.21 in 2016 of the total counselling cases at risk for suicidal behaviour.

So, if the incidence is on this rise at the workplace, it does mean that the managers need to be equipped with the skills for early recognition of depressive behaviours/signs and symptoms as well as how to best help the employee.

However, becoming aware of specific signs that are indicative of depression would be the most useful first step in being equipped to provide adequate help.

• Increased use of alcohol and other substances.

Signs of Stress at the Work Place

From working with Multinational Corporations for over a decade, 1to1help.net sees distress at the workplace manifesting in observable changes in an employee-

Increased leave taking, not being on time, not meeting deadlines, missing meetings, increased customer complaints, increased errors (from lack of focus and concentration), withdrawal from colleagues/friends, looking less alert even sleepy, decline in self care, not participating in team outings, complaining of vague aches and pains, and constant fatigue. It could also manifest in increased use of alcohol and other drugs.

The manager would be the best person to provide the most-effective and timely help – (1to1help.net training experience).

Why would this be true?

Most of the employees' waking hours is spent at the workplace

The manager has a good idea of the employee's interpersonal relating, productivity and participation in team activities (including team meetings).

The manager's suggestion about seeking help may be more easily accepted, since the employee has every intention of keeping his/her job.

What will enable the manager to provide effective help?

· Knowledge of signs and symptoms of depression

· Being intentional in his/her observation -- Learning to keenly observe his team members and track changes in behaviour and performance.

· To be seen as someone who is trustworthy so that the person himself/herself will talk to the manager about the distress experienced or peers who observe will know the manager would be an ally.

· If the manager is seen as someone who is able to manage his/her own stress effectively, employees will naturally turn to the manager when in distress

· Managers could also in their role ensure that there is adequate awareness about depression and the help available. This can be done by educating his team about early warning signs, or putting up information posters which includes contact details or how they can access help.

· Managers also need to be proactive in flagging specific times/occasions when stress may get heightened by triggers in those who may be vulnerable. This could be during project deadlines, changes in team/management, or other changes where employees' ability to cope is stretched.

Managers need to remember that severe depression may be life-threatening to the employee, but rarely to others. If an employee makes comments like "life is not worth living" or "people would be better off without me",' take the threats seriously. Immediately call an EAP Counselor or other specialist and seek advice on how to handle the situation.

Director of 1to1 Help