40 of the 61 Unicorns Founded by Indians are Based Overseas

Hurun Global Unicorn Index 2020 shows USA has emerged as the most preferred country of choice for Indian origin founders, as 36 out of the 40 unicorns founded outside of India are in the USA

Indian entrepreneurs have founded 61 unicorns—unlisted startups valued over USD 1 billion—to date, out of which only 21 are headquartered in India, shows a report released by Hurun Research Institute.

USA has emerged as the most preferred country of choice for Indian origin founders, as 36 out of the 40 unicorns founded outside of India are in the USA, as per the report titled Hurun Global Unicorn Index 2020. Of the remaining, two are located in the UK (OakNorth, Improbable), while one in each Germany (Omio) and Switzerland (Roivant Sciences).

The 40 unicorns founded by Indians outside of the country have a cumulative valuation of USD 95.6 billion.

"Of the 61 unicorns founded by Indians, a massive two thirds are based outside of India, predominately Silicon Valley in the USA, whilst only 21 are based in India. The Indian founders of the 40 unicorns outside of India deserve to be recognised in much the same way as Sundar Pichai and Satya Nadella, an inspiration to many young Indian entrepreneurs," said Rupert Hoogewerf, Chairman and Chief Researcher of Hurun Report. 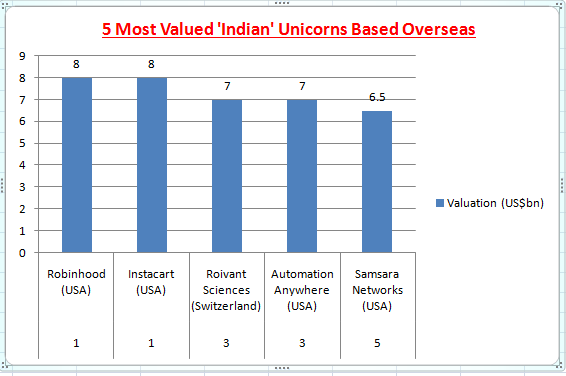 The most valued unicorns founded by an Indian founder overseas include California-headquartered trading platform Robinhood and San Francisco-based grocery delivery platform Instacart, with a valuation of USD 8 billion each, as per Hurun report.

As per Hurun report, there are a total of 586 unicorns in the world present in 29 countries. With 21 startups valued above USD 1 billion, India is fourth on the list of countries with the highest number of unicorns, preceded by US, China and UK.

US and China are home to 233 and 227 unicorns, respectively, accounting for79 per cent of the total unicorns in the world. 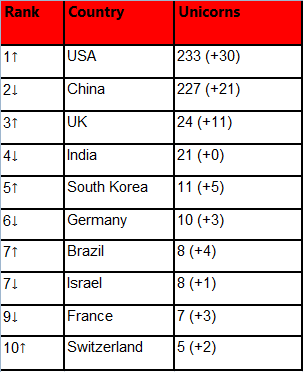 Bengaluru, popularly labeled as India's Silicon Valley, is home to the highest number of unicorns (8), followed by Gurugram (6), as per the report. Further, at USD 16 bn valuation Paytm is the most valued unicorn in India and 13th in the world.