Growing urbanisation has pushed farms out of the towns to the peripheries. But a new breed of farmers is taking farming by storm by helping us harvest superfoods sans chemicals and pesticides in our kitchen. Meet some of the urban farmers from around the country who ensure that these tiny shoots or microgreens provide a palate full of health, wealth and goodness.

By Tahira Noor Khan
October 21, 2019
Opinions expressed by Entrepreneur contributors are their own.
You're reading Entrepreneur India, an international franchise of Entrepreneur Media.

Hamsa V and Nithin Sagi broke away from their lucrative IT jobs with Infosys to pursue their dreams. Sagi had earlier taken up food photography and later partnered with Hamsa to open Growing Greens. The company is a business-to-business venture that sells microgreens, edible flowers, salad leaves, sprouts and herbs to five-star hotels, high-end restaurants and cafes in Bengaluru. "When we had started back in 2012, hotels would import microgreens from other countries due to the lack of local produce," shares Hamsa.

Microgreens are young, small-sized, approximately one to three inched, tall vegetable greens with an aromatic flavour that chefs mostly use to decorate and dress food. These young plants are said to have concentrated nutrient levels that can go 40 times higher than the normal size produce.

Sagi and Hamsa did thorough market research before starting Growing Greens. They interacted with various chefs to understand their requirements and, in the process, were introduced to microgreens. Hamsa recalls, "Chef Manu Chandra helped us immensely in our journey. He was also our first client." Growing Greens has grown gradually and consistently over the years. Sagi shares, "We started from a small terrace and today we are farming in four acres of land. We plan to take it up to 10 acres in the next two to three years." 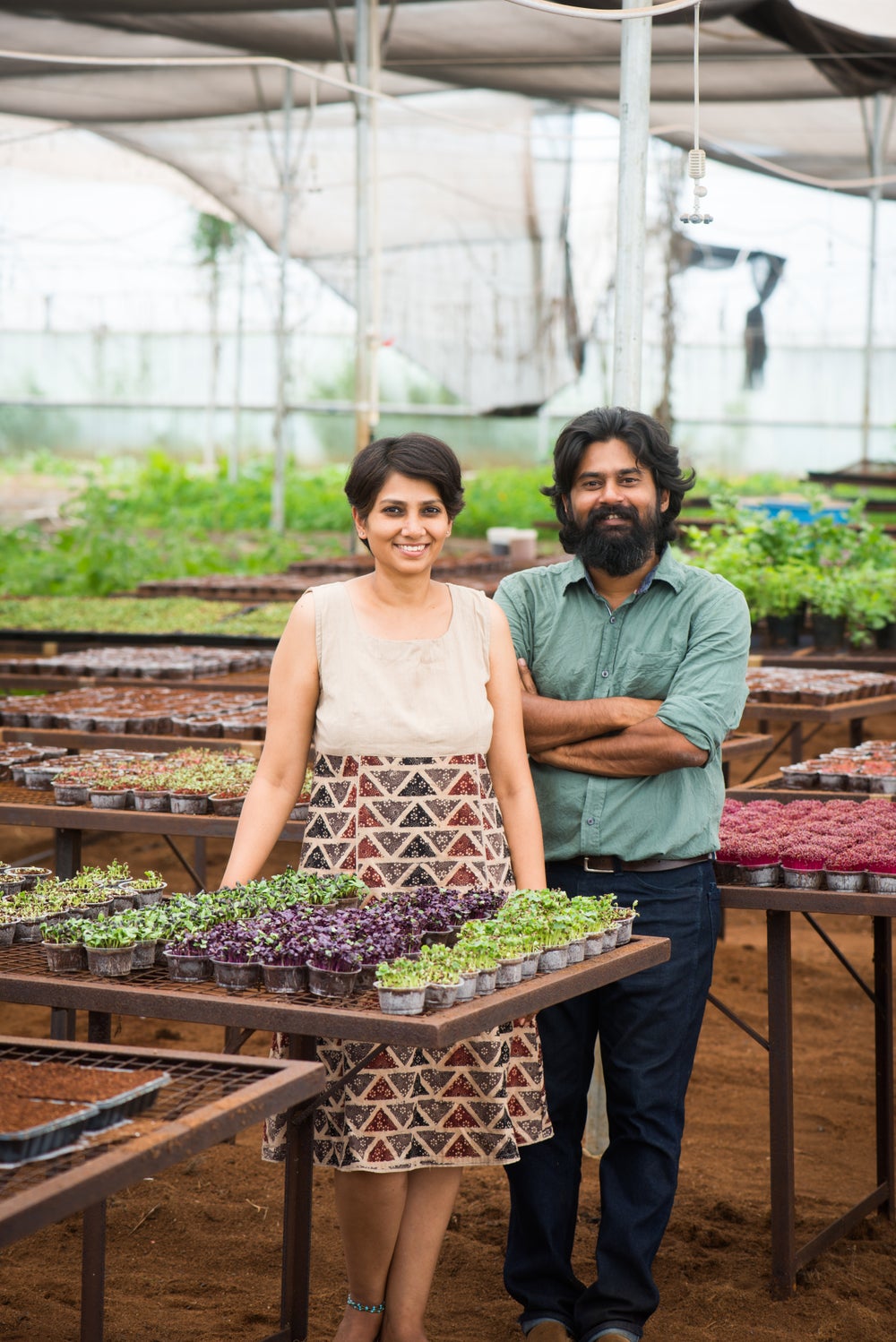 The impediment to farming in a city is the lack of availability of space. But technology, with all its wonders, has made farming possible in small spaces through urban vertical farming and hydroponics. Instead of soil, a nutrient-rich water solution is used to grow the plant in hydroponics or soil-less farming. Urban vertical farming is a method in which such hydroponic or other technology used planted plants are grown vertically, one over the other in a small space. As there is no soil, the weight on the wall or a roof is significantly reduced and there is no structural damage caused to the building.

Urban farming also ensures more control over the way food is produced. Hamsa shares, "We do not use any pesticide or chemicals on our food. We also provide live microgreens to hotels and restaurants, i.e., microgreens that are not cut but with their roots intact."

Mumbai-based banker turned farmer Linesh Pillai was introduced to urban farming in 2010 when he was in Poland. Disturbed by the high levels of contamination in food here upon his return, Pillai decided to grow his own vegetables. He started Terra Farms in 2012 and later renamed it as Urban Fate Farms or UGF Farming. He divides the operations of his company into four verticles broadly—Education, Dead Space Activation, Retailing and Zero Carbon Food Project. Under education, UGF visits schools and organizations to teach people how they can easily grow their own vegetables in the city. The Dead Space Activation is done for big hotel chains and high-end restaurants where UGF sets up a hydroponic plant and handholds them through the entire process until they learn to do it themselves. Some of their clients are Hyatt Moscow, Hyatt Delhi, Olive Bar and Kitchen Mumbai. Under retailing, UGF sells their live microgreens and leafy greens at Hypercity, BigBasket and Big Bazaar.

Zero Carbon Food Project tries to minimize carbon emissions created by our food habits. Pillai shares, "We have created a greenhouse at Don Bosco School, Manori. Growing the food where it is consumed reduces the carbon emission otherwise caused in logistics and cold storage." UGF currently operates in Mumbai, Bengaluru and USA. The company plans to expand and open its office in Dubai by June 2020. 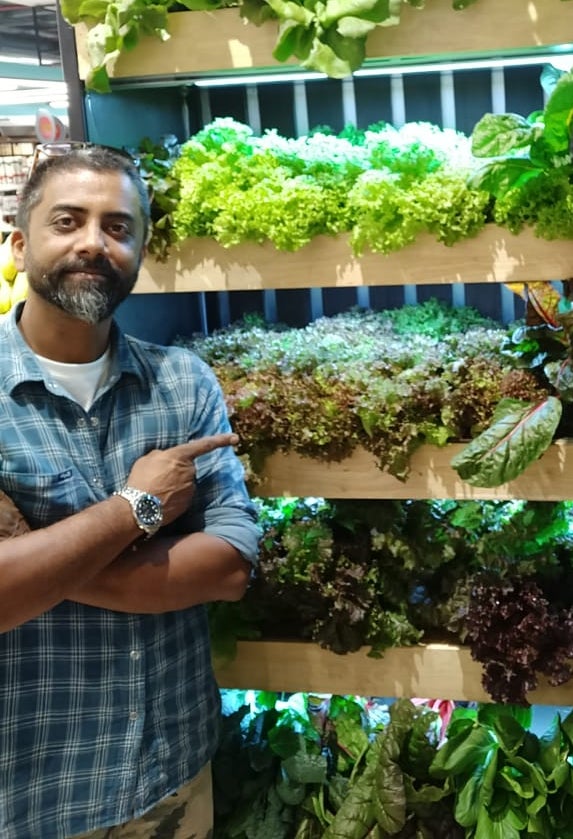 Homecrop, founded by four graduates from Vellore Institute of Technology Manvitha Reddy, Sharmila Reddy, Sai Krishna and Krishna Reddy, brings urban farming to your backyards, terraces and balconies. The company sets up edible farms for urban households who want to grow their own vegetables. Manvitha feels that "people can become more empathetic and understand a farmer's challenges by growing one's own vegetables."

Homecrop's journey has not been an easy ride. Manvitha divulges, "It was very hard to convince people to pay someone to set up a kitchen garden for them." The organisation now has a dedicated set of clients in Hyderabad. It also sells its DIY farming kits online pan-India through its website as well as through Amazon. Manvitha is grateful that she and her co-founders who have no background in farming are incubated at a-IDEA (Association for Innovation Development of Entrepreneurship in Agriculture), the technology business incubator hosted by ICAR-NAARM (Indian Council of Agricultural Research; National Academy of Agricultural Research Management) in Hyderabad.

"The incubation gave us the levy to experiment and learn. There was a lot of trial and error but we are lucky to have received solid mentoring," claims Manvitha. However, in terms of funding an urban farming enterprise, things are still bleak in India. Homecrop not only sets up customized edible farms for its clients but also provides impeccable maintenance services. For the first two months, it regularly pays visits to the client's garden who can later opt for ad hoc visits. 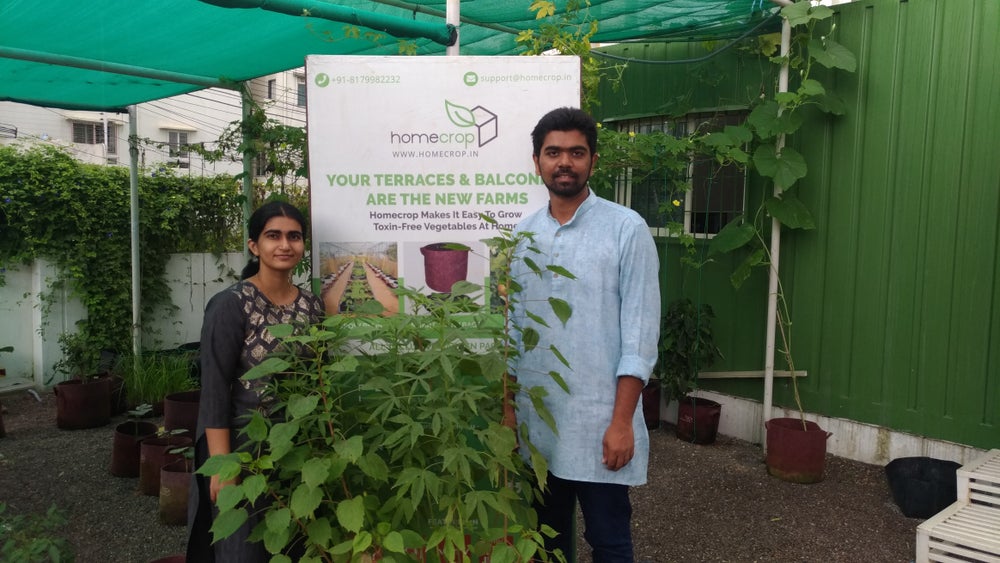 Home-grower of Hydroponic Produce
Somveer Singh Anand, much like Pillai, is also a banker turned farmer. Upon his return to India from New York where he was working as a banker, he again like Pillai, found it impossible to source organic and uncontaminated food. Using his knowledge to develop indoor hydroponic technology suitable for Indian climatic conditions, Anand started Pindfresh in 2016. Anand confesses, "Selling mutual funds and insurance policies as a banker in the US was dreadful. I did not enjoy what I was doing."

Pindfresh sets up indoor and outdoor hydroponic plants for people who want to farm using the technology. Anand's knowledge of hydroponic did come in handy but there were other obstacles to overcome before coming out with the perfect technology. "The climatic conditions in the US and in India are completely different. What worked there did not work here. So, I had to control lighting, humidity and temperature. It is all science and once I got it right, the first feat was achieved," professes Anand.

Pindfresh manufactures the pipes, lights and all the other equipments required to set up a hydroponic plant. The company earlier would outsource these components for the plant but were dissatisfied with the quality. Anand shares, "The quality of individual components would affect the overall quality of the plant. So we started manufacturing everything in-house to provide top quality to our customers. It gave us better quality control."

Pindfresh is headquartered in Chandigarh but that doesn't stop the company from being available to its customers across India. "We get on a video call and guide our clients accordingly. We are also just a call away for any query. We believe if the client has invested their money in something, they should get the maximum value out of it," he declares. 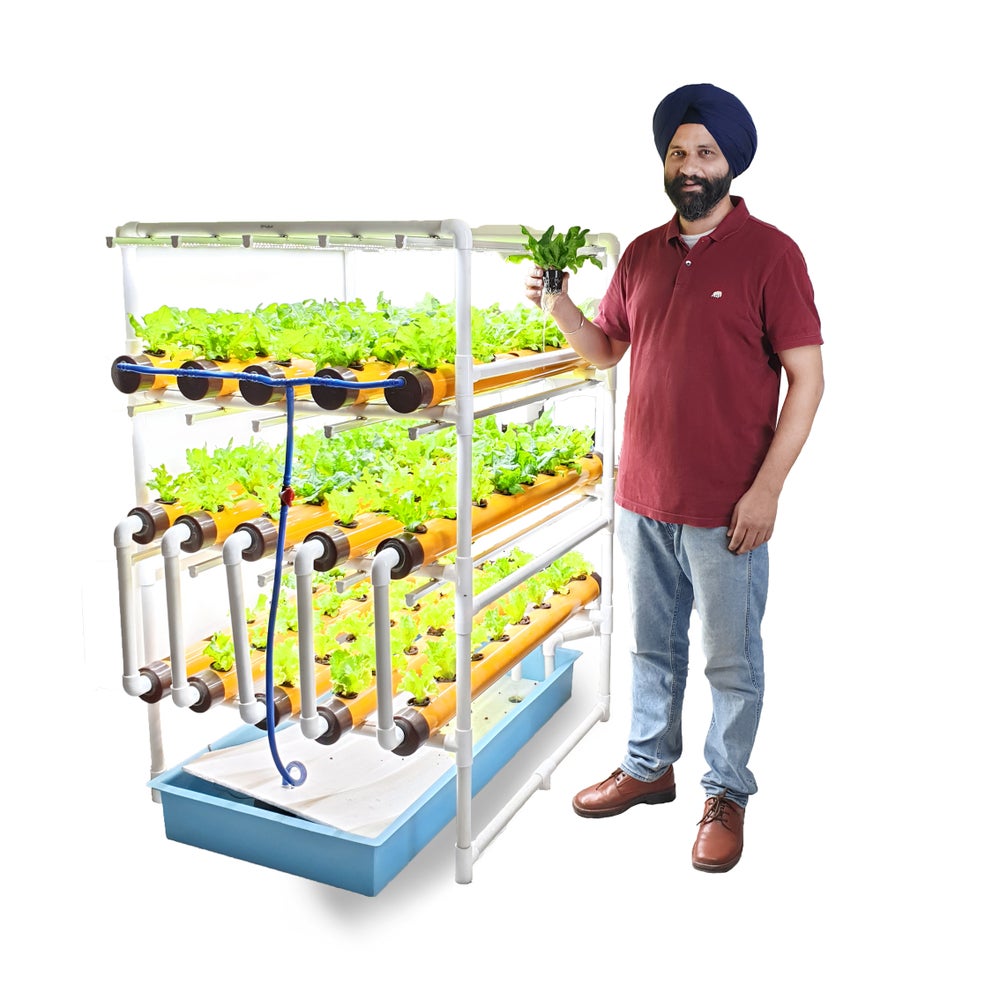 Akash K Sajith, Founder, Living Food Company started the business after a personal tragedy befell him when both his parents were diagnosed with cancer. Taking charge of things, he informs, "There are 1.5 million cancer deaths in our country and only one-fourth of them are caused due to tobacco while the remaining three-fourth are due to contaminated food."

Sajith, who has worked for Myntra and Lookup in the past, had a fair understanding of how start-ups function. With his knowledge, he gave his heart and soul to his new venture Living Food Company. The company is the largest B2C player selling microgreens to households. He shares, "We didn't want to sell microgreens to just five-star hotels and big chefs as my main aim was to deliver healthy, organic and quality food to Indian households."

80 per cent of Living Food Company clients are B2C consumers. Sajith started Living Food Company by selling microgreens and then later expanded it by selling fresh oven to table sour bread, spreads, probiotic drinks, among other products. Sajith wants to bring the missing transparency in the food sector. "Currently, no vendor gives you the traceability on where your food is coming from, where it is grown, and under what conditions they are grown. With Living Food, I want to bring about a change in the system," he declares.

From his wide experience of working with start-ups, Sajith has learnt to never give up even in the face of adversity. He shares, "In the first six months, Living Food had 500 consumers which in the next six months had risen to 4,500. We are consistently growing." He is happy that Living Food Company is changing the food sector in India, even though in a small way. The company has its own farms where it grows fresh microgreens and vegetables. 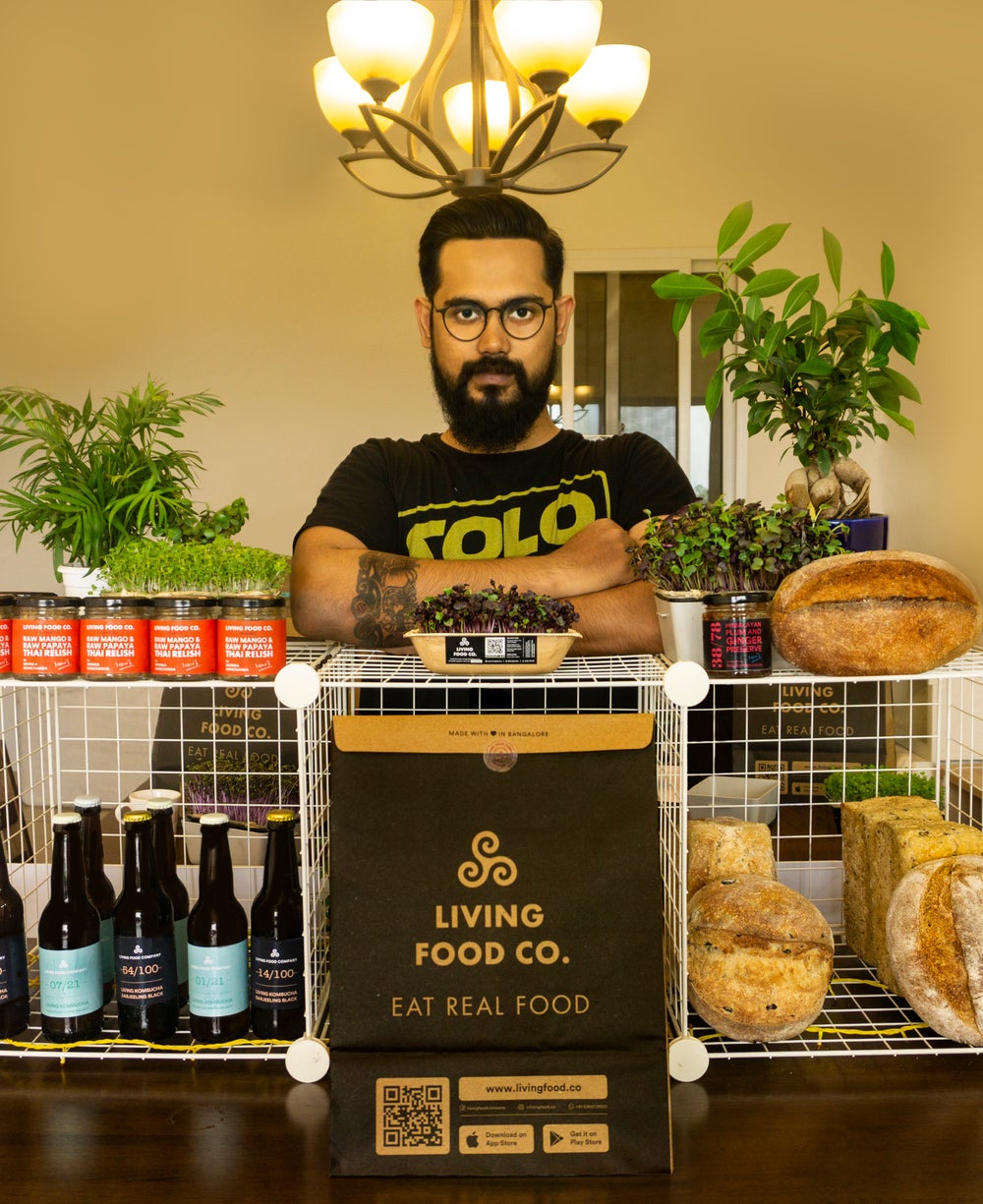 They might have traded away their lucrative careers but none of them are regretful about it. A common thread that binds all these urban farming entrepreneurs is the high degree of job satisfaction. Anand who relocated from Mumbai to New York to Chandigarh, says, "I've realised you don't need much in life. I am happy that my small business is able to generate employment and give something worthwhile back to society."

Pillai has a retirement plan chalked out for himself. "I am working towards building my retirement abode. It will be a self-sustaining house with no electricity and power connection. I will generate my own electricity through solar panels and engage myself in rainwater harvesting," he mentions.

Taking pride over the best decision of her life, Hamsa confesses that farming has made her more content and happy. But her journey as an urban farmer has been riddled with challenges. "Farming is a difficult profession that requires a lot of patience and perseverance. There are many things that are not in your control like natural calamities. We have had forest fires in our farm and our crops have been spoilt because of heavy rains but I do not ever regret getting involved in farming," she happily shares.

Benefits of Hydroponic or Soilless Farming