Early learning for kids is no more a child's play

By Sandeep Soni
May 25, 2015
Opinions expressed by Entrepreneur contributors are their own.
You're reading Entrepreneur India, an international franchise of Entrepreneur Media.

All work and no play makes Jack a dull boy, is what we all grew up hearing. But that is changing fast to only work and play without any learning involved makes Jack a dull boy. In 21st century, globally competitive kids need to have their cognitive skills and critical thinking nurtured right before six or eight years of age. According to UNICEF India, around 26 million children are born every year in India who got registered. To make these new born globally smart citizens, education forms the crux. Unfortunately, Indian education system is marks-driven rather than focusing on logical understanding and application of skills to solve daily life problems. This is supposed to be a part of early learning at home or school by the age between six and 10 years when human brain gets fully developed.

Flintobox that delivers toys and activities to create, play, read and explore on different themes like wildlife and oceans in a box every month to kids; Metis Learning that makes Eddy, tablets for kids between two and 10 years; Edsix Brainlab that aims to gamify the learning process for kids through its digital platform Skill Angels focusing on improving cognitive skills, critical thinking, visual processing – are among few start-ups aiming to fill that gap in early learning space for kids. Start-ups like Skidos and Callystro also operate in the same space.

Vijaybabu Gandhi was a concerned father about his son's inability to engage with things he used to learn or play with at home. Busy father, who worked at Sun Microsystems and Oracle, wanted something that not just interests his son but also works on his early brain development. This urge translated into Flintobox that he started along with his friend and former M&A executive at Samsung, Arunprasad Durairaj, in late 2013.

"He had the idea that if someone could curate and design age-appropriate developmental activities for his son, he would buy those. We realised there was hardly any player in this category except those boring educational toys or mindless entertainment toys," says Durairaj. The start-up raised angel funding worth $300,000 in October 2014 led by GSF Superangels.

"With so many kids getting born every year, there is a huge propensity in middle-class parents to spend on child development. It is a huge but underserved market. There are not many quality opportunities available which cater to the development needs of their children. This solution by Flintobox is very timely for the digital age," says Rajesh Sawhney, Founder, GSF India.

"Most of the games have to be actually targeted towards parents, making them understand how to play those games with their children along with imparting education. We haven't seen much game publishers around that arena. The value proposition in start-ups like Flintobox is very obvious," says Beas Dev Ralhan, CEO, Next Education India. Next Education is among the pioneers in the space with more than 6,000 schools as partners impacting more than six million students through digital and game-based learning. 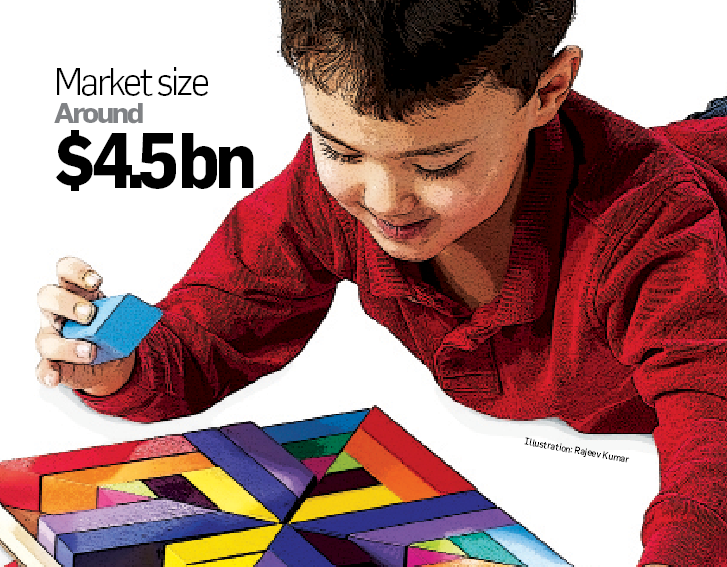 Different from toy market, game-based learning comes under non-school educational spent segment that is worth around $4.5 billion in India, according to Durairaj. Flintobox focuses on kids between two-eight age who are around 75+ million in India.

Durairaj and Gandhi sold 200 prototypes of Flintoboxes to nearby apartments, schools for product validation. "Within 45 days around 70 per cent of the people came back for it," says Durairaj having over $1 million turnover and growing by 50 per cent every month.

The duo offers three-12 months subscription based Flintoboxes containing four-five experiential activities for kids at Rs 795 per month for one year subscription. The start-up has a little over 6,000 subscribers. While Flintobox focuses on offline physical approach, Metis Learning and Edsix Brainlab are betting on digital side.

Edsix Brainlab, formed in February 2013 by Saravanan Sundaramoorthy, a certified six sigma black belt went with the B2B2C model to validate its age-wise graded platform, Skill Angels. In B2B mode, he connected with around 11,000 children through 350 schools across India for one-time assessment of their cognitive skills at Rs 300 per student. The positive feedback Sundaramoorthy got has now led him to launch the B2C platform this year in June.

"It will be a one-year membership programme followed by an assessment with clear differentiation on how the child has improved. There are multiple games for the same skill so that children don't develop skills in the game but develop skills through the game. For example, for building focus and attention for different age groups from five to 12, there are minimum 10 games out of total 500+ games," says Sundaramoorthy. The star-up was incubated at IIT Madras and supported by CIIE, IIM-Ahmedabad.

In the low-margin high-volume business, Edsix Brainlab offers package from Rs 800-1,500 per annum per child. The start-up already has around 5,000 annual subscribers in the beta version of Skill Angels.

Metis Learning, on the other hand, sells tablets, which they manufacture in China, with preloaded 160+ games from Rs 8-10k on its website. A team of curriculum developers study and hand-pick apps based on kids learning capacity at different age groups from more than 50,000 education-based apps.

"We follow the US market where from 19 per cent in 2013, almost 31 per cent of kids last year had started owning their own device. Across the world, people are looking at game-based learning to make a big impact on kids. It is an emerging market in India," says Bharat Gulia, Founder, Metis Learning.

Creating awareness and making discovery around customer acquisition are two key problematic areas for these start-ups. The awareness about the cognitive skills is very poor in India because of the marks-driven Indian education system.

"Lack of awareness and discovery around customer acquisition and retention are critical challenges that will make or break a business. Companies that are most focused on expanding their reach to the right target customer segments and turning them into repeat, loyal customers will eventually win," says Victoria Fram, Director of Investments, Village Capital. Village capital is Washington-based investor that invested Rs 25 lakh along with CIIE in 2013 in Edsix Brainlab after it won the Tech4Impact, a national level innovation challenge in India by Village capital and CIIE.

But how do these start-ups really differ from the traditional existing educational toys and games? "They offer hybrid engagement solution, both online and offline so that your child doesn't get obsessed with only online activities. There is a continuous process of child development with new activity boxes every month," says Sawhney.

Fram too swears by this hybrid model. "Edsix combines online with offline components in regional languages, which is important to target demographics that do not have access to computers or the Internet. They are also differentiated in the quality of their content and the customisation they focus on to support creative problem-solving and decision-making," says Fram.

Most of these start-ups are already angel funded and are looking for, if not actively, their Series A funding along with expanding user base.

"More start-ups will come up in this space because the market is very big. With most e-commerce growth coming from Tier 2 cities and as awareness about such services increases, the opportunity will expand to rural areas too," concludes Sawhney.

How Credible Are Barcodes To Assess Genuineness Of Products?