This Startup Is Digitizing Bus Commute In India

Technology has outrun humans in the recent past. Though it was discovered by humans, the latter is struggling to keep himself updated with what is happening. It was rightly conjured that by 2020 we will see flying cars, as multiple flying car prototypes are touching the sky. Technology has touched every aspect of our lives and more importantly has been solving intricate issues with dexterities.

However, in this rush to develop the next cutting-edge technology, somewhere humans have forgotten to solve problems that are right in front of us. Problems that most of us mistake with normality. A Mumbai-based startup called Chalo has addressed one of the many discernible concerns that we Indians have got habituated with.

In an interaction with Entrepreneur India, Dhruv Chopra, Co-founder, Chalo, a technology company that is digitizing our broken bus service system talks about how one of the heavily relied mode of commute lacks technolgy encroachment and how his startup is impacting hundreds of lives.

After building CarWale and BikeWale, a popular portal to buy new and used vehicles, Chopra was among the very few who had developed an understanding about the growing presence of cars and bikes on the already stressed Indian road. He realized that though cars were increasing on the roads, only a very handful of the population was using them. He was right, at present in India for 1000 people there are 22 cars.

He realized that because of the poor infrastructure of India's public transport especially in buses, people were relying more on personal vehicles.

But the main question that unsettled him was what was being done for millions of bus commuters? From the beginning, he along with other co-founders Priya Singh, Mohit Dubey and Vinayak Bhavnani were sure that they had to bring innovation in buses, as it still is a heavily dependable mode of transportation not only in the country but in the rest of the world. It is with this thought that they incepted Chalo to provide reliability and bring convenience to bus commuters.

Chalo digitizes buses and makes them safe and reliable with live tracking and contactless digital payment. The company boasts to improve the experience in stage-carriage buses using a full tech stack. At present Chalo is present in 30 cities and provides solutions for consumers as well as for bus operators. The company's official app allows features such as live bus tracking, thus showing live arrival times of the buses and a live passenger indicator that shows how crowded the bus is in real-time.

The startup apart from private bus operators has also partnered with operators of city governments to bring their bus passes to the Chalo App and Chalo Card. 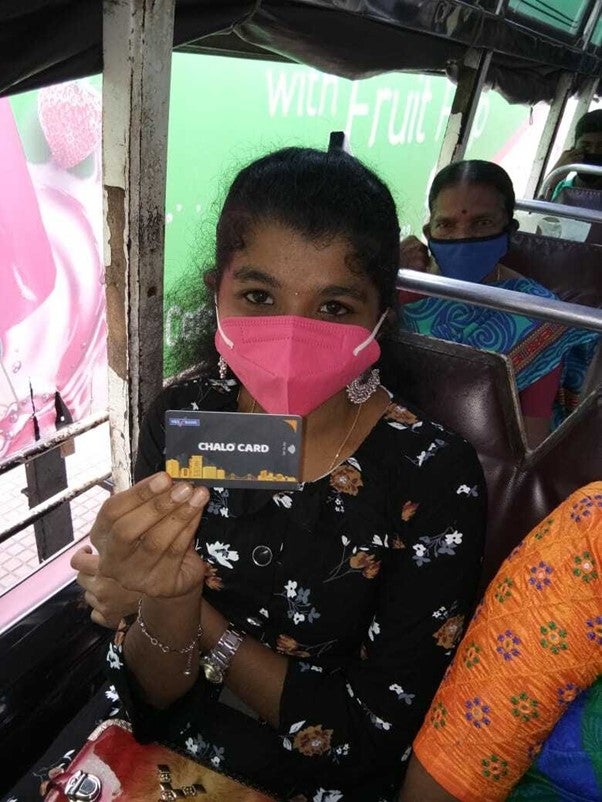 Bus passengers can also buy mobile tickets and bus passes on the Chalo App, or choose to scan QR codes in buses to pay digitally for their bus ticket.

The 2014 founded company also provides Chalo Card, an NFC touch-to-pay smartcard that can store a pre-paid wallet and travel passes.

The firm has recently raised $7 million in January 2021 from Raine Ventures, Neeraj Arora, and Amit Singhal (former Senior Vice President and Head of Google Search, Google). The latest round of funds has pushed the investment in the company to $30 million. Earlier the startup has raised $16 million and $5 million in Series B and Series A rounds respectively.

Business Model
As per the International Association of Public Transport (UITP) estimation, India has over 1.6 million buses registered and the public bus sector operates 170,000 buses that carry 70 million people per day.

But how can a startup solve problems in so many buses? "Our approach towards solving the public transportation problem has been to address it in a holistic manner," Chopra added.

"We deploy all our technology without asking for any upfront investments from governments or operators. This means that the entire capex and initial investments needed in hardware like GPS devices, electronic ticketing machines, making cards available, are all borne by Chalo," he added.

The company charges operators a share of the increased revenue caused after the incorporation of both hardware and software.

At present, the company facilitates live tracking of 15,000 buses.

We have more than 5,000 buses signed up to be "Chalo Buses' now, as compared to approx. 2,000 in Feb 2020 before the lockdown. We have added more buses in the 6 months after the lockdown ended, than in the 12 months prior to the lockdown.

Despite the lockdown, the pandemic has been fruitful for the company. Though during lockdowns, the operation of the startup came to standstill, it later collaborated with various governments to run essential services.

However, once the unlock phase began, the company witnessed people relying on the app to check the status of a bus or know how crowded it is. The contactless payment option further catapulted its user base.

"Passengers want digital tickets to avoid cash exchange, operators are struggling to make ends meet so they want technology to help improve operations and reduce costs, and city governments want to eliminate the risk of spreading COVID-19 and need sustainable bus operations to keep the economy running," he added.

Though the company operates in 30 cities, all of its products are not available in these cities. As a future plan, Chalo's priority is to provide all its offerings to these cities and make bus transport 100 per cent digital.

The firm further plans to kick starts its operation in some international cities.