Where is the Bottom for this Bear Market?

Bounces will pop up here and there as they did this past week...but don’t think for a second that this bear market is over because the Fed is not yet...

This story originally appeared on StockNews

Bounces will pop up here and there as they did this past week...but don’t think for a second that this bear market is over because the Fed is not yet done with their mission to tamp down the flames of recession. When all is said and done we will have a recession and the S&P 500 (SPY) will be much lower. This leads to the key question: Where is bottom? Investing veteran Steve Reitmeister shares his views in his updated market outlook below.

September was downright brutal ending with a crescendo of selling that sent stocks to the lowest levels of this bear market. Not surprisingly this created ripe conditions for a 6% relief rally for the S&P 500 (SPY) to kick off October...how quickly that party ended.

Thursday investors took a modest step back. But then after hours we received word of a terrible earnings report from Advanced Micro Devices (AMD).

These are not just AMD problems. Unfortunately it speaks to a wide spread slow down in computer products along with supply chain issues that will no doubt harm many in the sector.

Couple the above with a Friday jobs report that was just a tad too good which investors know will embolden the Fed to keep raising rates aggressively. This increases the odds of a hard landing for the economy down the road pushing more investors to hit the sell button.

Long story short...welcome back to the bear market. Get the rest of the investment story and trading plan in the fresh commentary below...

Right now investors are in a can’t win situation as good news sparks stock sell off as readily as bad news. Yes, that is quite odd but it aligns with the general premise of...

When the Fed was lowering rates, as they did for nearly 12 years straight, we all used this saying as a battle cry to stay bullish. That is because lower rates are a catalyst for economic growth, which is great fuel for stock prices.

Now we have the opposite.

A Fed that is dead set on extinguishing the flames of inflation with the most aggressive rate hiking policy in history. Meaning the pace at which they are raising rates is unprecedented.

The reason for this fast pace is not just the high rate of inflation. Sadly, the Fed was asleep at the wheel calling early inflation “transitory” and thus not something to be burdened with.

When the Fed finally woke up to the stickiness of this inflation, then their only recourse was to aggressively raise rates. The goal is to slow down the economy, which by extension will tame inflation.

Or let me put it another way. Recession by its very nature leads to less demand. Everyone who ever took Econ 101 knows this will lower prices thus reigning in inflation.

Putting these pieces together means the Fed is actively trying to create a recession. And yes, recessions and bear markets go together like peanut butter and jelly.

This explains why “Don’t Fight the Fed!” now translates as “watch out below!” for stock prices.

And this also explains why even good news on the economic front is greeted with selling. The most recent instance of that was the October Employment Report on Friday showing robust job gains that only gives the Fed a green light to continue to aggressively raise rates.

The only real questions are how deep of a recession will we have and thus how far down stock prices should go?

Those betting on a soft landing would be right to think the recent lows at 3,585 for the S&P 500 (SPY) would seem like a fair bottom for stocks as it represents a nearly 26% decline from the all time highs.

Unfortunately I have yet to talk to anyone calling for a soft bottom. That’s because with the Fed slow to react to inflation, that they have to be more aggressive in the steps taken. Not just the pace they are raising rates, but also the unwinding of Quantitative Easing. (aka Quantitative Tightening).

Most investors forgot about this one. 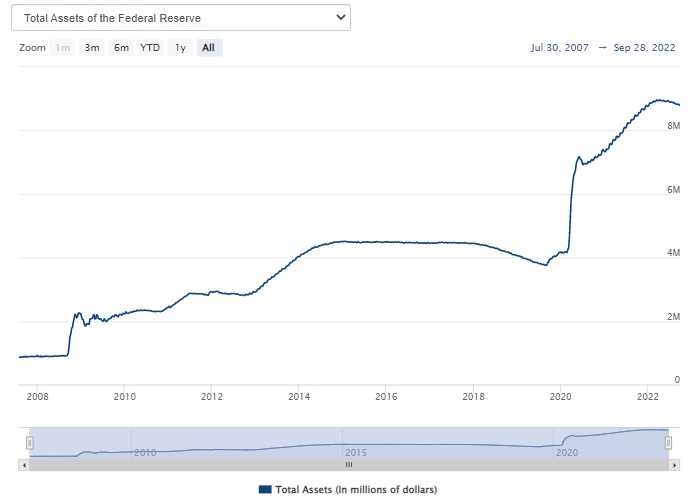 Now they are unwinding that massive balance sheet $90 billion dollars a month. Here again, lets go back to our Econ 101.

If the Fed sells these bonds, then it increases the supply of bonds. If demand is the same as the past, then it will naturally lead to higher rates to attractive investors to buy the bonds. This is yet another form of putting the brakes on the economy.

Back to the point...where is all of this heading?

Unfortunately the smart money is on much higher rates and a much weaker economy and thus much lower stock prices.

Let’s not forget that the average bear market endures a 34% decline in stock prices. That would equate to 3,180 this time around.

But also the average bear market comes hand in hand with a Fed that was LOWERING rates to help the economy recover. Now you have the exact opposite. So it likely points to a weaker economy and lower lows.

Second, when you have low rates on bonds, it makes the stock market look like a more attractive investment by comparison. That is NOT true when rates are going higher.

Imagine Treasury yields of 5-7%. That will be the safe money investment choice. Likely corporate bonds paying 2-3% above that.

It will be very tempting to take that safer route to investment returns. Especially if you believe that rates will come down in the future only padding the return on these bond investments.

This is another way of saying that demand for stocks will not be as strong at the bottom of this cycle as the typical recession and bear market. And thus it is not crazy to contemplate that stocks will need to fall further to get more investors off the sidelines.

No one rings a bell at the top or the bottom. So timing this perfectly is not in the cards.

However, it does say that right now the wise choice is to bet on stocks going lower...much lower.

Discover my special portfolio with 9 simple trades to help you generate gains as the market descends further into bear market territory.

If you have been successfully navigating the investment waters in 2022, then please feel free to ignore.

However, if the bearish argument shared above does make you curious as to what happens next...then do consider getting my updated “Bear Market Game Plan” that includes specifics on the 9 unique positions in my timely and profitable portfolio.

The post Where is the Bottom for this Bear Market? appeared first on StockNews.com