By Jason Daley
July 6, 2009
This story appears in the July 2009 issue of Entrepreneur. Subscribe » 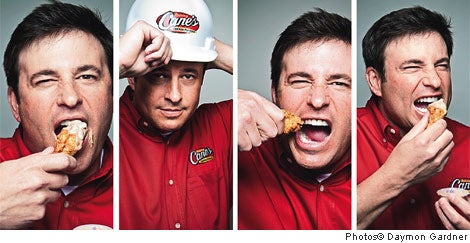 In 1996, near the gates of Louisiana State University, Baton Rouge-native Todd Graves, 37, opened the first Raising Cane's Chicken Fingers restaurant. With only four items on the menu--cooked-to-order chicken fingers, garlic toast, French fries and coleslaw--the irreverent quick-service restaurant rapidly became an LSU institution. More than a decade later, boosted by its casual atmosphere, community philanthropy and addictive Cane's sauce, Graves' $125 million company has expanded to 69 company stores and 13 franchises in 13 states, with another 10 slated to open this year.

How did you get funding for . . . chicken fingers?
At first, the bankers said the concept would never work, but that inspired me even more. I worked as a boiler-maker in California for four months and as a salmon fisherman in Alaska to raise startup money. When I went back to the bankers with my seed money, they saw my dedication and decided to give me a chance.

You could expand like gangbusters. Why aren't you licensing more franchises?
We're such a cultural company, we want our franchisees to live and breathe Cane's. It's hard to find people that match and align with us. We want experienced restaurateurs and operational fanatics. But when we do find a match, we offer tremendous franchise support. We have an operations director working directly with them, routine meetings in Dallas and Louisiana, bulk discounts. We don't want to open stores that are not in our vision. We're not in a hurry; we want to grow Cane's right.

What's the Pillar Program?
We take great managers and operators in our Cane's family and get them into a franchise. Credit's tight right now, so we finance the restaurant for them and they get the opportunity to buy it. We started with five, and they're all doing really well. Going to large franchise groups is not as exciting as financing someone in our company who doesn't have the wherewithal to get cash for a restaurant. This program has such a good vibe.

How do chicken fingers equal success?
Our concept is one love: We do one thing and we do it right. But a big part of it is the culture of the restaurant (we play music and have an open kitchen where staff members can chat with customers) and our community involvement. My accountant calculated the other day that we've donated 27 percent of our profits. Right now our stores average $1.9 million each. Without our culture and philanthropy, I'm sure it would be half that.

So first came the chicken, then the egg . . . or the chicken. What's next for you?
There is no exit plan. I want to grow old with this thing and die with it. The founders I respect are guys like Chik-Fil-A founder Truett Cathy. That guy is 88 and still works every day. And Dave Thomas, who worked until he died. There will be no sellout; I have a vision, and it will take me my whole life to see that through.