How a Downsized Burrito Led to Franchise Success

By Jason Daley
October 14, 2011
This story appears in the October 2011 issue of Entrepreneur. Subscribe » 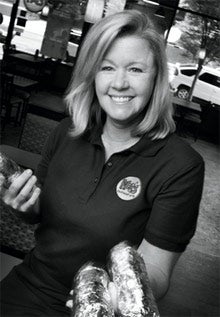 On her 40th birthday, Laura Leigh Drake went to Moe's Southwest Grill with a friend. The owner of a small apparel shop in a tennis center in Birmingham, Ala., Drake was interested in fresh food and healthful eating, and that trip to Moe's was a revelation.

"I thought that burrito was the freshest, best-tasting thing I'd eaten in my life," she says. "When my husband, Kealon, came home from work the next night, that's where I took him."

In 2004, after inheriting some money, the Drakes decided to invest in a franchise. At the top of the list was that same Moe's location in Birmingham, which was up for sale. Laura Leigh took the helm of the restaurant, while Kealon, a CPA, did the books. By 2005, they'd acquired three more locations in the area.

As time went on, Drake began to address comments from her friends and customers--things like, "I love Moe's, but I can't finish their burritos. I feel bad wasting so much food." She experimented with a half-size burrito, larger than the children's but smaller than the mammoth regular size. It was a hit at her locations, but the franchisor at the time wasn't keen on letting franchisees mess around with the menu.

But in 2007, Moe's was purchased by Focus Brands, which looked at Drake 's innovation and decided to give it a shot across the chain. When Moe's rolled out the Joey Jr. burrito nationwide in 2009, it quickly topped the sales list, drew in more customers and is one big reason the franchise continued to grow during the recession.

We talked with Drake, who is now on Moe's Menu Development Committee, about what she believes it takes to stay innovative in a franchise environment.

How has a half-size burrito actually increased revenue?
Instead of people coming in and cutting a burrito in half and sharing it, they get two junior burritos. In a way, the junior burrito empowers them: Now they can get a burrito however they want it, instead of compromising with someone else. It also adds another niche to our market. People who are very into fitness and counting calories can come in and have Moe's in a smaller portion size more often. It came about by just listening to the customer.

Are you still experimenting with the menu?
We let employees play around. When they get through cooking for the day, we'll try something new. I'm open to employees making me something they think would be pretty cool on the menu, like homemade barbecue sauces, sopapillas or refried beans. I've only been on the Menu Development Committee since January, so they're helping me be creative.

What does the Menu Development Committee do?
We constantly look at all the kinds of things we can do to change the menu to make it better. We have a million ideas we put out there that we won't try, but then there's always that one that connects. Everyone is moving to organic and lower fat and fructose-free, and that's kind of what we do. We have a gluten-free menu and a light menu. People can come in and customize however they want. That empowers customers and draws them back.

What's your philosophy on employees?
The only way to go forward in this business is to keep people long term. Many of them have an entrepreneurial spirit, and after working with us for years they aspire to own their own businesses, too. I'm 49, and many of my employees are 35 or 36. My idea is to set up a reverse mortgage and over the next 10 years let some employees buy us out. We're opening a new store in Decatur, Ala., and have a few employees investing with us for the first time. We treat each employee the way we'd want someone to treat our kids. That puts the business in perspective.

Do you still eat at Moe's?
The funny thing is, I've always been a fresh-food person. I have a phobia: The minute something expires, it's gone. This is really the only restaurant I could have ever worked at.