How to Keep Your Seasonal Franchise Going Year-Round

Don't let your business grind to a halt when your traditional selling period comes to a close.

Franchises in sectors that were long thought of as seasonal are finding that by adding new services and technologies, they can extend their operations year-round. It's not only a plus for employees and a more efficient use of equipment--it can be a major boost to the bottom line.

Demand for shaved ice pretty much crashes between October and March in most of the U.S. Or at least that's what Tony Lamb assumed when he launched his Kona Ice mobile franchise in 2008 in Florence, Ky. But as his business model matured, Lamb realized it wasn't as simple as that.

Lamb had already learned that roaming neighborhoods looking for business was nowhere near as efficient as partnering and fundraising with schools, youth groups and sports teams and bringing Kona Ice directly to events. As franchisees developed relationships with community groups, clients began asking for ways to partner with the company, even when its trucks were buried to their rims in snow. To Lamb, this was the proof he needed that shaved ice doesn't have to be a seasonal business. 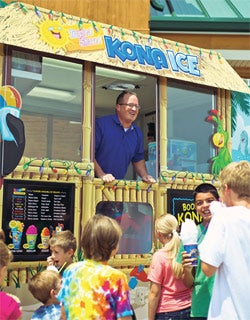 "Through all that fundraising, we build great relationships, and schools count on it. In fact, we've given back $5.8 million to community groups," he says. "During the winter there are swim meets, band competitions and other indoor sports. And the need for school fundraising never stops."

With those partnerships, the franchise took off, growing to 300 trucks in just four years. Now Lamb is working diligently on something he calls the Kona Mini, a model truck with the same ice-shaving capabilities and flavor stations found in the full-size Kona, but geared for indoor venues such as schools and convention centers. The trucks, which Lamb has tested in eight locations, will officially roll out late this year.

While Lamb has gone the extra mile in producing this new piece of technology to help his franchisees, he's not alone when it comes to trying to extend the traditional reach of seasonal franchises. House painters, tax preparers, exterminators, Halloween retailers and others are looking at ways to give franchisees options to extend their seasons and income opportunities. Sometimes that means adding new, nonseasonal services; in other cases it means allying with a separate franchise that can utilize the same equipment and employees.

Brandon Stephens, president of The Decor Group in Lubbock, Texas, says the Christmas Decor franchise started as an add-on for lawn and landscaping companies in the late 1980s. As landscaping season winds down in the fall, Christmas Decor ramps up, with crews installing lights, wreaths and other wintry decorations. This not only extends the employment of seasonal workers, but also makes the most out of equipment--trucks, trailers and ladders--that otherwise would have been in storage.

Once Christmas Decor matured, Stephens found that many franchisees wanted to keep their lighting technicians on staff year-round, rather than laying them off each summer. So The Decor Group launched a separate franchise, Nite Time Decor, which installs home and architectural lighting. "Landscape lighting is a growing industry, and we wanted to offer those services so some of our franchisees could combine the two concepts," he explains.

Gary Fouts, a landscaper in New Lenox, Ill., and Christmas Decor franchisee, added a Nite Time Decor element to his business 10 years ago. Not only did this allow him to retain a dedicated lighting technician year-round, but the synergy between landscaping, Christmas lights and outdoor lighting has led to referrals for all parts of his business. "I can keep my salespeople all year, so they're not relearning the sales methods again each October," he says. "Any landscape lighting we do, we try to hit [the customer] up for Christmas lighting, too."

As the economy has shifted, dipping into two franchises has allowed Fouts to even out his cash flow. "Outdoor lighting has been low with this economy. People say, "Oh, we can push that off for a couple of months or a year,'" he notes. "But Christmas is an emotional sale. People still want that. The majority of our customers are busy professionals who don't have time to do the lights themselves or don't want to go up on the roof."

For Kona Ice, extending the season has meant modifying the delivery method without reducing the quality of the product. Shawn Hickey, an Indianapolis-based franchisee, tried to extend his season during his first year in the flavored-ice business initially by keeping a truck inside a local mall during the winter. It didn't go so well.

"I thought it would be a killer hit, but the sales weren't awesome," he says. However, he notes that the truck did serve as "a billboard for millions of people going through in the winter," which led to lucrative new relationships.

When he learned about the Kona Mini, Hickey was not convinced--it seemed to him that going to schools and schlepping around a model truck wouldn't be cost-effective. But he changed his mind after seeing the Mini in action. "I live near the factory where they were making the prototypes," he says. "Once I saw it, I thought it came out really stinkin' awesome." 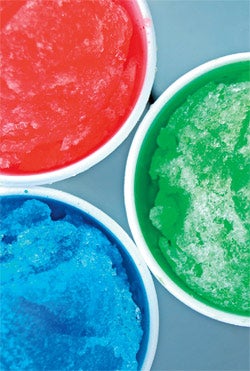 He signed on for one of the eight test machines, and by the end of last winter, he was pushing his mini-truck into 10 schools on a regular basis and says he turned a modest profit. He expects to double his distribution by next winter. The Mini could never replace the truck, Hickey says, but it is a great ancillary product; during the busy season, he can send the Mini to small events or places where a truck wouldn't make sense. (And not having to invest $100,000 to add a seventh truck to his fleet is an added bonus.)

For Lamb, it's a way for franchisees to add revenue without overextending themselves. "The Mini is there to help franchisees maximize existing territory," he says. "If you buy a new truck, you have to get new territory to make it pay. This gives them a viable option and makes the franchise stronger. I'm directing some of my eager franchisees in this direction, instead of having them grow too quickly."

John Rost, CEO and founder of Fiesta Auto Insurance and Tax Services, a Southern California-based insurance and tax-preparation franchise that mainly serves blue-collar and Hispanic customers, had seasonality on his mind when he founded his company in the late 1990s. He didn't think tax preparation on its own was a viable model.

"I believe tax-only franchising is a dinosaur," he contends. "It just doesn't make sense. It's way too hard to keep track of customers once they walk out the door and you don't see them for 11 months of the year.

"Someone like us can cross-sell customers into our insurance service, or vice versa," he continues. "It helps our franchisees, because they get revenue from two different businesses throughout the year. And it benefits customers, because they can shop at a place that's comfortable for them, and they're not seeing a stranger each tax season. On top of that, we're more affordable, so it's a win-win for the consumer and the owner."

One of the main advantages of going year-round is that a business doesn't lose its momentum. Stephens of The Decor Group says keeping the same employees and equipment moving, even if they're doing different work, leads to better performance and greater profits. "Yes, you could grow Christmas Decor into a stand-alone business, but it would take a while," he says. "It's just not realistic that you're going to build the scale you need that quickly. Most folks keep doing something year-round. It's difficult to build up your business so quickly; then when Dec. 25 comes and the Christmas season disappears, you have to dismantle everything. You have to revive the business every year. It doesn't make sense if you're going to build a business of any size."

That said, seasonal franchises have their advantages. The businesses are relatively low-cost, but it is the lifestyle that appeals to many franchisees, who may not want to spend 12 months a year working.

That's something that was made clear to Lamb when he first got excited about the Kona Mini. "I have an older franchisee in New Hampshire with three trucks. Summer there is so short, I thought they would want to extend their season," he says. "I told her this big, elaborate story about how we're developing this little truck and that it would be great for her. She said, "We look forward to the end of the season in October as much as we do opening in March.' That put me in my place. I have to remember that working year-round is not for everybody."