Who Joins a Networking Group...and Why?

Recently, my networking company, BNI, cooperated with Steve Brewer, a graduate student from St. Thomas University in the United States, as part of his master's thesis in marketing. As a result of this research, we have acquired an interesting picture of the type of businessperson/entrepreneur who joins a networking group.

Based on this study, we learned that more than 76 percent of all networking group participants we surveyed came because they were personally invited by someone! OK, that's not a big surprise, since networking is a word-of-mouth function. However, it's excellent reinforcement to what we already know-namely that people mostly join networking groups through the invitation process. Amazingly, only 24 percent came to their particular networking group from all other forms of marketing and advertising combined (including the internet, trade shows, calendar listings, newspaper articles and so on). Traditional media exposure definitely supports recognition of the importance of networking, but what brings most people into a networking group is one person asking another person to visit.

According to the study, 74 percent of all networking group members surveyed identified themselves as business owners, and 23 percent said they were employees. The overwhelming majority of those surveyed, or 70 percent, first visited because they were interested in some type of networking group. Roughly 6 percent were encouraged by their company to attend. But what's most interesting is that 5 percent of the people who visited and joined, didn't want to offend the person who invited them by not joining!

One of the questions asked in the study related to how comfortable people felt when they first visited. An astounding 93 percent of all people who joined felt welcomed by other members of the group they first visited. An impressive 79 percent of all networkers surveyed reported that the business they generated from the organization had either met, or exceeded, their expectations. 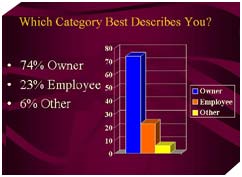 Once when I was visiting one of my groups, I met a prospective member who was a local business owner who tried to tell me that the organization was made up of youngsters (which, according to him, were people under 30). According to our survey, more than half of the members, 58 percent, were between the ages of 30 to 49, with approximately 32 percent being over 50 and only 10 percent being 29 years old or younger. Now, I understand that one group may vary from another, but from my experience, most networking groups, as the study indicated, seem to have a fairly even age distribution. As it turns out, the results from this study clearly conclude that roughly 90 percent of members participating are over 30 years old. The actual graph is a classic bell curve, with the under 30 and over 60 ranges being the low ends of both sides of the curve.

Finally, the last statistic from the study that I'd like to share in this article is one that has remained fairly constant over the last decade. The study found that roughly 41 percent of networkers in the survey were female, and 59 percent were male. This roughly 60/40 split was virtually identical to previous studies done in the past (including my doctoral dissertation in 1993). Although some specific countries may vary substantially on this one area, we have found most networking organizations have this general distribution of men and women networkers. 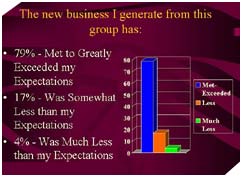 So what have we learned from this study? 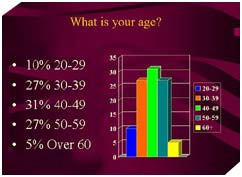 I believe this is valuable information for entrepreneurs who are considering becoming involved or already actively participating in networking groups to have. If you're in a group already, I hope you take the opportunity to discuss these survey results within your networking group in the near future.

As entrepreneurs, we like to have the hard facts, the statistics, to support our actions in developing our new businesses. These stats clearly support networking as a viable, productive and effective way to market ourselves in our business environment today. As businesses become increasingly informed and educated about the tangible benefits of growing their businesses using a structured word-of-mouth program, I feel that these positive numbers will only increase!

Dr. Ivan Misner is a 'NY Times' bestselling author and co-author of the bestselling book, 'Networking Like a Pro' (Entrepreneur Press 2017). He is also the Founder & Chief Visionary Officer of BNI (www.bni.com), the world's largest referral marketing and networking organization.