Reinforce Your Company Culture Through 'Random Acts of Culture'

By Chuck Longanecker
June 12, 2015
Opinions expressed by Entrepreneur contributors are their own.

We have reached a turning point where employees no longer regard a great culture as something nice to have. It is now a necessity. And businesses that provide an enriching culture are already reaping the benefits. Studies show that companies whose employees say they're happy at work are outperforming the competition by 20 percent. What's more, those companies show a positive correlation with shareholder returns and a 12 percent lift in workforce productivity.

Research from Glassdoor even suggests that companies that won Glassdoor's "Best Places to Work" award in 2009 have outperformed the S&P 500 over the last six years.

Achieving great company culture, however, is no easy feat. Once you establish the guiding principles of your culture, you face maintaining and safeguarding it in ways that reinforce your values, excite employees and attract the right kind of talent.

Over the past couple of years, we have witnessed these actions from great business leaders through what I call "random acts of culture." They give us a glimpse into the cultures of great companies, while reaffirming to employees that their leadership regards those cultures as a commitment.

One of the most recent examples came from Gravity Payments' CEO Dan Price. In an effort to boost pay equality and give everyone in his company a living wage, Price made the starting salary at his company $70,000. Price spoke of this shift on the podcast So Money as a simple experiment, a test of the Princeton study that found that emotional well-being rises with income.

If all employees earned a higher salary and were happier for it, how would that scenario affect customer service or, better yet, the company's bottom line?

Price also took a massive pay cut himself of $930,000 to make that starting salary figure happen, reducing his own pay to the $70,000 minimum.

While his act of salary equity was in itself outstanding for company morale, his significant pay cut demonstrated his commitment. What better way to reinforce the notion of pay equality than by awarding everyone the same salary as the CEO?

Related: 3 Companies That Do Culture Right and What You Can Learn From Them (Infographic)

Richard Branson is no doubt a visionary leader in company culture. As his company, Virgin, grew from record stores to a full-blown enterprise, "serious fun" became a driving force behind his company's culture. The idea started as a simple effort to disrupt "business as usual" and introduce some fun into the day. And overtime has since scaled across the different verticals of the Virgin family.

Recently, the next generation in "serious fun" began. The newest sector of the enterprise, Virgin Hotels, launched a distinctive employee wellness program. True to Virgin fashion, it focuses on a well-rounded approach, whose offerings range from yoga classes to a softball league, from free English lessons to the encouragment of an infusion of employee personality into the business. Sample: Someone at the hotel front desk doing a moonwalk while checking you in, or a chef incorporating his love of tattoos into a brand new dish.

Virgin Hotels' program puts the health and happiness of employees at the heart of all they do. It is a new iteration of the company's core vision and demonstrates the company culture to new additions to the Virgin empire.

Virgin VP of People Clio Knowles describes it this way: "If we truly live the culture every day, it becomes part of the fabric of who we are as a company, and in order for it to become embedded in our daily lives, we have to reinforce it regularly."

It's no surprise that AirBnB has a fantastic culture. CEO Brian Chesky has recognized company culture as a fundamental drive for an enduring product. What is most remarkable about AirBnB is that its leaders recognize that their employees are not the only stakeholders in their culture. AirBnB hosts are an extension of the company's customer service, and its continued success depends on hosts acting as brand ambassadors.

With that idea in mind, AirBnB held the Airbnb Open last fall, a conference to inspire hosts and teach them about making guests feel more at home while traveling. The event brought together 1,500 hosts from 40 countries to discuss topics related to the company's values, such as "sharing, community and belonging." The conference then ended with a day of community service, with more than 400 AirBnB hosts and employees volunteering.

This pep rally of sorts was a great gesture, demonstrating to hosts the meaningfulness of the company's "Belong Anywhere" theme. The company created an event that not only helped educate and spread its company values and ideals to hosts, but helped them feel connected to the AirBnB community as a whole.

This simple act of extending company culture to hosts likely went a long way toward strengthening the ties between the company and its most loyal stakeholders, which may then result in a better customer experience.

Plan your own random act of culture.

I recently embarked on my own culture experiment at Digital Telepathy, exploring whether we could make every business decision based on our culture. We spent the last year redefining our purpose and the values required to accomplish it every day. From there, we created the Tao of DT, a guide to our company culture, driven by a set of seven core values by which we live, inside the office and out. 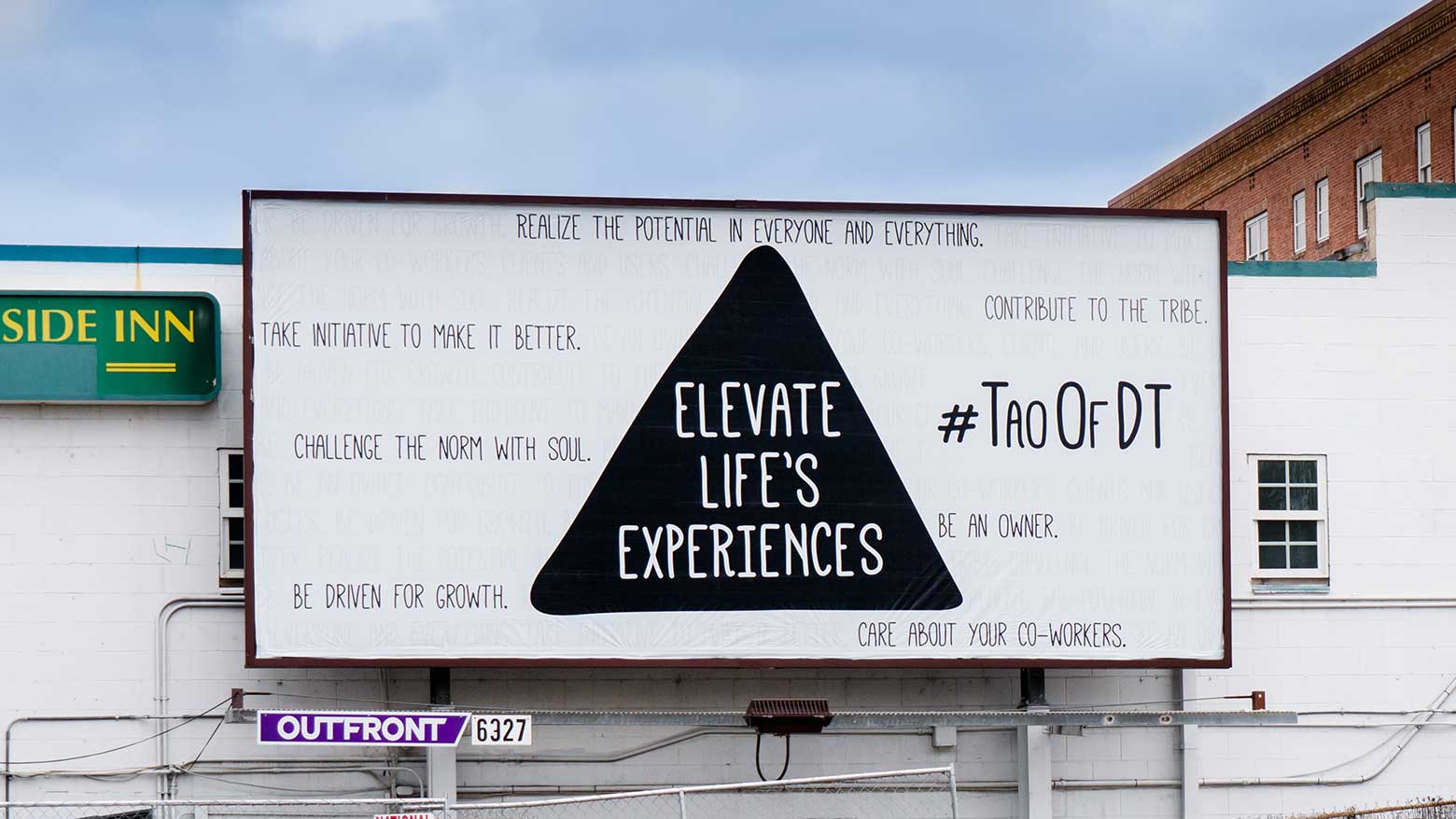 Over several weeks, we rolled out a guerilla marketing campaign to introduce the "Tao of DT" to employees, including the act of hiding countless sticky notes and whiteboard graffiti around the office with inspirational quotes from the Tao (a little benevolent propaganda).

What resulted was our own random act of culture: We surprised employees with a billboard dedicated to our cause and values that now sits two stories above a busy intersection in downtown San Diego. Our team members commute by this sign every day. The sign is intended as a profound gesture of our commitment to our culture and as an inspiration to others driving by.

Now, it's your turn to give it a shot. A random act of culture reaffirms your company culture and can do wonders in boosting morale.

Whether it's a shift in the way your company does business, as in Gravity Payments' case, or simply a great program or event that can alter the lives of your workers, such as Virgin Hotels and AirBnB have done, "random acts" are crucial in spreading and maintaining your culture.

So, allow your culture to guide your actions' conception. You won't be disappointed, and your company culture will be better for it.

Related: Entrepreneurs Need to Focus on Culture, Not Perks