This Company Accidentally Deleted Its Clients' Data. Here's How It Won Them Back.

Six reputation management lessons you can learn from GitLab's mistake.

Bad things happen even to good companies. No matter what the reasons for a crisis are, it can affect and even destroy a brand's reputation. In such a situation, a company must react.

There are two possible ways for a company to deal with a crisis situation. The first is to hide and keep silent. Do not admit the problem, do not comment, do not say anything. Just wait and hope your clients or the media don't notice what's happened. That might work, but be careful. If the problem catches the attention of social media and people see you've yet to react, any future comments might prove useless.

Related: What Businesses Can Learn from #DeleteUber

The second way is to face and attempt to repair the issue. This is tough. It requires split-second reactions to comments and mentions throughout the web, especially on social media. But if you handle it properly, you'll save your brand's reputation and show the public you're committed to helping them.

GitLab's recent handling of a crisis is a perfect example of the latter approach.

January 31 was a nightmare for GitLab. Some of its clients' data from a primary database service was accidentally removed. In addition, the backup didn't work and GitLab lost access to a huge amount of data. As a result, GitLab.com service was not available for 18 hours. The brand's reputation was at serious risk.

Just imagine: You're a social media manager for a company that has to store developers' code. Your clients trust you with the most valuable thing -- their intellectual property. And your company lost it. In GitLab's case, this accident affected more than 5,000 clients' projects worth billions of dollars. What's more, the list of GitLab's clients include such organizations as IBM, Sony, NASA, Alibaba, Invincea, Jülich Research Center, O'Reilly Media, Leibniz-Rechenzentrum (LRZ) and CERN.

Related: 7 Steps for Maintaining Your Composure in Times of Chaos

Can you imagine dealing with thousands of furious customers? Can you imagine how quickly the negative information was distributed? What would you do in this situation?

Let's look at how GitLab handled this crisis, step by step.

Thinking carefully and analyzing the situation is dramatically important in any crisis situation. It's all about making the right decisions within the right timeframe. Remember, you can hide or you can admit the problem publicly. If you choose the second way, go to social media first, as Gitlab did.

Gitlab posted on Twitter and admitted that it was performing emergency maintenance in order to get the service back up and running.

We are performing emergency database maintenance, https://t.co/r11UmmDLDE will be taken offline

It's a common mistake to wait until the problem is resolved to communicate with your audience. If you decide to go public with the problem, make sure everyone believes that it's under control and that you're diligently working to rectify the problem. Update your customers about the status of the problem, including what's going on and how long it will take to fix.

The day after the incident, GitLab provided an explanation and informed everyone what went wrong and how it planned to resolve it. The company published an explanation on its website and posted it on Twitter.

So, what happened yesterday? Here's what went wrong and what we're doing to fix it: https://t.co/vWqs0TmrkL

From that moment on, the company kept its audience updated regularly, communicating and answering all questions. It even created the hashtag #HugOps so it wouldn't miss important comments and mentions. This move gave GitLab's audience the opportunity to find all the answers they needed. Instead of talking to each other and gossiping, the audience conversed with GitLab and participated in solving the problem.

Related: 4 Hallmarks of Leaderships in a Time of Crisis

In crisis situations, it's also important to keep up with how your customers are talking about the issue across the web. Track the conversations and react with information and updates if your number of complaints grows. There are plenty of tools that will help you spot all important mentions or comments on blogs and news sites.

Gather all your brand mentions in one place and sort resources by authority and number of comments per resource. Monitor the situation on social media to discover, follow and collaborate with people and companies who mention you or your brand. You can sort them by number of followers and decide which requires your immediate attention.

Prioritize all resources and people that mentioned your brand, figure out who's creating the biggest buzz and connect with the authors of mentions as soon as possible.

Remember, reacting quickly is the most important thing in such situations, so use the tools that can help you react immediately.

Sometimes the problem can't be fixed in one day. You'll need some time. While you are fixing the situation, do not disappear. Stay with your audience. They want to know what's going on and if you don't give them answers, they will draw their own conclusions.

From a marketing point of view, GitLab did a great thing -- it stayed in touch with its audience throughout the crisis situation.

GitLab maintained an online presence by:

After the problem was fixed, GitLab thanked everyone for their help and created a special logo to express its appreciation.

This smart move transformed the situation entirely. The audience thanked GitLab for being so transparent and keeping customers informed.

Related: Scared for Your Reputation? The Crime is Seldom as Serious as the Cover Up.

Ten days after the incident, GitLab published a post in which it described in detail what it had learned from this situation. Why did it do that? The audience was ready to understand the problem. Give the audience an explanation!

Looking at an engagement chart, we can see that there were two posts that got the most attention during the crisis period. Both were explanations. The first was posted just after the incident and the last one was posted after everything was fixed. 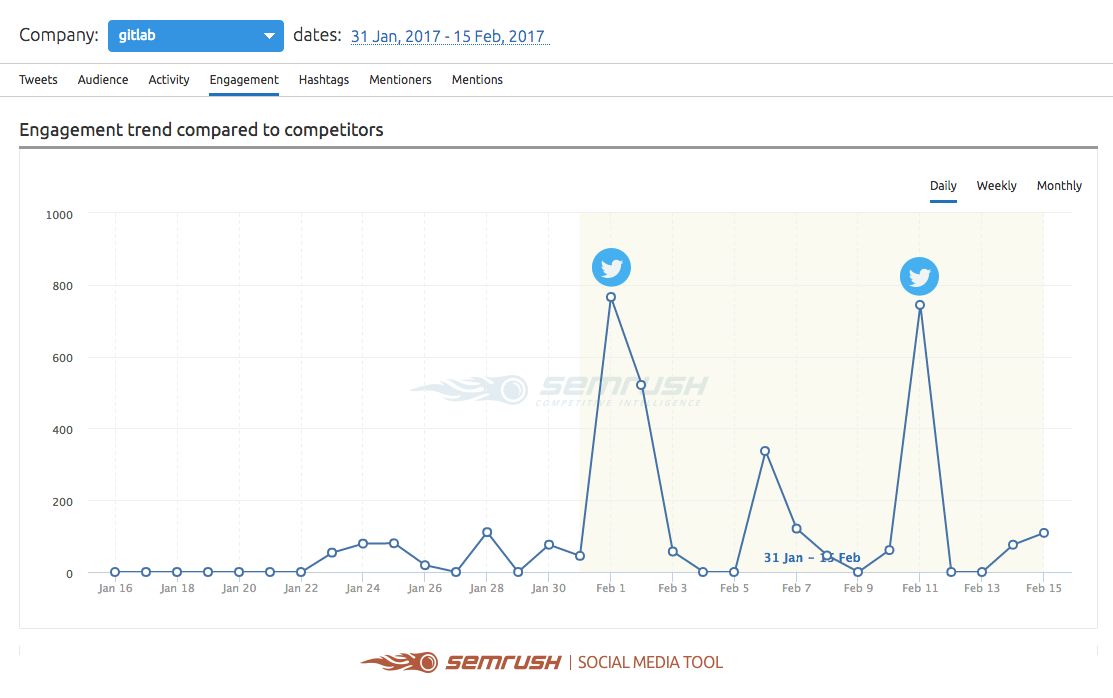 GitLab's employees wrote the second post so that their colleagues in the industry could learn from this occurrence. They admitted their mistakes, provided their action plan, and explained how they will prevent these mistakes from happening again. This move transformed a negative experience into a positive one.

No matter how bad the situation is, never lose your sense of humor (situation depending). It usually works to diffuse hot tempers. Yorick Peterse was the guy who pressed the wrong button and deleted all the data. No doubt he was terrified when he realized what he did, but still he found the courage to laugh about it.

If you have problems with your database not scaling due to too much data, I can probably help you :troll:

Crisis situations can happen at any company. No one is safe. The thing is, audiences will focus on your timing, your actions and how you resolved the particular situation.

Why was GitLab's case so remarkable?

Nadia Nazarova is a product marketing manager at SEMrush. Having been a marketing specialist in top financial companies, Nazarova now has 7-plus years of marketing experience. Her areas of expertise and interests are social media management, reputation management and search engine optimization.