By Janet Steele Holloway
October 29, 2009
Opinions expressed by Entrepreneur contributors are their own. 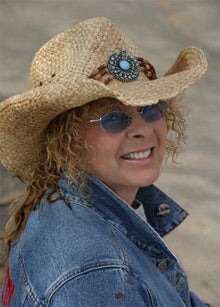 She's known as Bloody Mary in Hollywood, where she does special-effects makeup. She sells camouflage face paint to the military. Theme parks use her name and product lines for their Halloween celebrations.

It all started in 1992, when Bobbie Weiner's "happily ever after" dreams were shattered. Her husband of nine years "took off on a Harley, saying the marriage was over," she recalls.

As a doctor's wife in Bel Air, Calif., she'd devoted herself to charity work, raising funds for pediatric AIDS patients and other local nonprofits. She had no idea how to support herself. When she told her hairdresser at his Brentwood salon, his suggestion was a shock--and the catalyst for her dive into an amazing career.

He told her to take a makeup class. "The image of me selling foundation and lipstick in a local department store was horrifying," she says. But he was thinking about movies and told her that the Jim Lasco special-effects makeup course was one of the best. "Hollywood will be all over you," he promised. Weiner went to the closest pay phone and signed up.

The night she completed the three-month course, the director of the school called, telling her of a one-day job as gofer on a small-budget film. "It paid only $35, but it was film work, and I took it," she says. She brought a "goody bag" to the set: cigarettes, eye drops, electrical tape, scissors--anything anyone on the set might need. She also hung out with the makeup people as much as possible and made some friends. On their next shoot, they asked her to work with them on makeup. It was a low-budget horror film, and she was so good at doing zombies and ghouls that the crew named her Bloody Mary. Those contacts led to another call a few weeks later to work on corpses for the movie Titanic, which was being filmed in England. "It's all about the networking and who you know," Weiner asserts. "That, and doing a good job."

On the Titanic set, she transformed hundreds of actors into blue-lipped, icicle-covered corpses floating in the sea. Weiner was also on the set of Behind Enemy Lines with Gene Hackman and the film Shooter with Mark Wahlberg. "I love doing a lot of different things and keeping busy," she says with a laugh as she talks about her line of Halloween makeup. She enjoys traveling the country doing "Makeup To Die For" workshops and has just completed a series of workshops in Florida, preparing groups to morph into zombies and ghouls for Halloween.

Makeup, she says, is needed by all sorts of people: actors, sports fans, the military, kids on Halloween and birthdays, and, yes, even dead people. Her cosmetic line The Final Touch sells worldwide to funeral homes. In 2005 Weiner published a comic book, Tales of Bloody Mary, and has licensed her name to create a line of hot sauces and Bloody Mary mixes. Six Flags over Texas and Universal Orlando have picked up her name and product lines for their Halloween celebrations.

She is proudest, however, of the recognition she's received from the U.S. Department of Defense. As the agency's No. 1 supplier of camouflage face paint, she has received two gold medals recognizing her as one of the government's highest-quality suppliers for the armed forces.

Weiner also is proud that her makeup is made in the U.S. Her factory and distribution center are located in Long Beach, Calif., where she employs more than 250 people. With a gross income of more than $1 million per year, she also has distributors in Asia, Hong Kong, Spain and Italy. Among other projects, Weiner hosts a Bloody Mary Cruise on Carnival Cruise Lines each winter, and she's completing the book, I Can Do This, a story that begins when her husband ends their marriage. "I'm very lucky," she says. "Never in a million years could I have predicted this career for myself."

Like many entrepreneurs, the biggest challenge she faced in starting her business was finances. "No banker would even talk to me about cosmetics. I showed them 40 orders from 46 colleges, the Citadel, the U.S. Marines, and I still couldn't borrow $10,000. I had to sell my car to get $6,000 to start the business." Still, not everything has changed since her married days. Even as she travels the world doing business, she's still raising funds for charity. "It's important to give back, especially to kids. They need a chance to have fun, whether they're sick or healthy."

Now in her 60s, Weiner's advice to potential entrepreneurs is, "Never let age get in your way! You're never done until you're dead," she says, laughing. Then she adds, "You have to believe in yourself when no one else does. Take a chance. The bigger the risk, the bigger the reward. At the end of the day, it's just you."