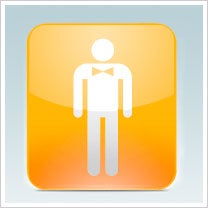 "I know what boys like. I know what guys want." -- The Waitresses, from their album Wasn't Tomorrow Wonderful

Sure, vocalist Patty Donahue said that she was what boys liked and what guys wanted in 1982, and the whole song was seemingly just a love affair with herself. But some time ago, this song came on in my sister's car, as do many favorite tracks of the 1980s, and it got me thinking, "What do men like? And what do they not want?"

I decided to just ask someone who had experience advertising to men.

"Guys don't want to read wedding content about flowers or cake," Chris Easter, 25, told me. This, of course, opened up a manly door of manly insight.

Easter is a co-founder of The Man Registry, along with friends Bobby Horner, 27, and Jimmy Horner, 29. TheManRegistry.com is an online resource for grooms and a specialized wedding registry.

And the company started out of personal observation, which is always my favorite start to any entrepreneurial story. I much prefer "I noticed that nobody sold plastic lion skulls, and damn, I just love quirky crap, so I started a company that sold plastic lion skulls" as opposed to "I graduated from business school and just kept trying to figure out what would make me money."

The Story: A few years ago, Easter and his partners were attending a number of weddings, constantly hunting down items on registries and noticing that nothing really seemed fun to them.

"The gifts were predominantly geared towards the kitchen, bedroom and bathroom. There weren't really any gifts that the guy could get excited about," says Easter. "As we thought more and more about the creation of a groom's registry, we began to look around at resources for the groom online. We were surprised to see that there were none."

So the salesman (Easter), the chemical/pharmaceutical purchaser/business developer (the younger Horner) and the airline captain (the older Horner) became entrepreneurs by founding the Kansas City-based website in March 2008.

And the three entrepreneurs were undoubtedly onto something about fun gifts that the groom might love. I'm actually attending a wedding tomorrow, which my girlfriend and I went shopping for last week. The registry at Bed, Bath & Beyond was filled with spatulas, towels and random pink items. My girlfriend stuck closer to the actual list, looking for a mortar & pestle for our friends Shawn and Tina. Meanwhile, I suggested buying a dragon statue. It turns out that the "Beyond" section of Bed, Bath & Beyond is super weak and has no awesome dragon statue. I guess "Beyond" to them just means patio furniture, rugs, lamps and nothing with lasers. Ugh.

"Once the three of us realized in our heads what this could eventually become, we moved quickly to get it online. We took the initial steps of forming an LLC, putting together the business plan, setting up the business banking info, and putting together a solid team of advisers and mentors in various areas of business," says Easter. "Simply put, we got our ducks in a row before we even thought about making our first sale."

But how does a company like The Man Registry secure the massive demographic their company is based on?

Easter laid it out for me.

"Since we're strictly an online company, the design and functionality of the website are of huge importance," says Easter. "We have obviously had to work hard to determine what engages men on the web. We have identified key areas that are essential to selling grooms on our website. If we don't do the following things well, we fail."

Though Easter and the Horners (also a possible doo-wop group from the early 1960s) have the logistics of marketing to men, they're still only attracting 50 percent of the population. What about women?

"We do devote approximately 35 percent of the marketing budget to reaching out to brides. The main message that we try to convey to the bride is that her fiance can go from an uninvolved bum to actually enjoying the wedding process by visiting our site and seeing just how many aspects of wedding planning he can get involved in," says Easter. "We also ran a campaign in November and early December encouraging women to buy Christmas gifts for the men on their list from The Man Registry. We had a great success with this campaign as we were able to convey that The Man Registry knows men and knows what men like."

I thought the initial questioning would be more difficult for Easter, but marketing to men while securing women actually seems much easier when he puts it in those terms: "Men, we know what you like, and women, we know what your men like."

Why does it have to be harder than that?

"Since we're in the wedding industry, we have to include [the woman demographic] in our budget and plans because marriage is a two-person job. In many instances, we rely on the bridge to discover our website either online or in wedding publications and send her fiance to our site," says Easter. "Typically, guys don't actively seek out wedding websites, so we have to get creative in how we reach them. One of the ways we do this is marketing to the bride because we know she's going to send him to The Man Registry."

Beyond that, they just need to keep the men coming back to the website for more than shopping. Right now, on the website, a featured article is "Writing Your Vows: A Gameplan."

In fact, their content is what may keep repeat visitors. The content is relevant, witty, charming and informative. It isn't just a box of slick gimmicks.

"The content in our 'Groom 101' section focuses on the groom's responsibilities and areas that he would be interested in," says Easter. "These categories range from the bachelor party to picking out the right ring to honeymoon planning to groom-friendly wedding showers where he can rake in the manly loot! We also recently launched GroomsAdvice.com, which is our official blog. This blog is updated several times per week and includes regular guest blogs from some of the heavy hitters in the wedding industry."

Aside from content, the other two outlets of the website's "three pronged approach" is a wedding vendor directory as well as gift registry and groomsman gifts. The gift registry is the centerpiece of the website, according to Easter. It has a large selection of gifts for the best man, groomsman, usher and ring bearer, and can be personalized.

But did it have everything?

I decided, as a superb investigative journalist, to see how reliable The Man Registry's gift registry actually is.

"I used to play in a garage band with three close friends," I told Easter in my e-mail. "Let's say that, hypothetically, and God forbid, as we can all hardly dress ourselves in the morning, those three guys were going to be married soon. What items from The Man Registry would you recommend I buy for my friends?"

"First off, we'd be very interested in meeting the women who have agreed to marry these men!" Easter added, after reading the descriptions of my friends. I suppose I should also mention that I let those three friends (Rex, Jeff and Chase) each write their own mini-biography...

REX: An avid gamer, Rex would like to play Call of Duty with the Stanford Branch of Dunder Mifflin more than anyone else. And if he could have any job in the world, he would have Jim Halpert's job: as Pam Beesley's fiance. Rex loves Zooey Deschanel and Katy Perry (but only when she looks like Zooey Deschanel). And if zombies started a revolution, so that he could fight and destroy them, Rex would be the happiest man in Brazil.
CE: "Rex has surely thought long and hard (that's what she said) about how his video game playing time is going to decrease after marriage. Our guess is he won't be playing Call of Duty much with the wife. However, maybe she can become a gamer too. Surely he has an XBox 360, Playstation 3 or Wii. How about picking him up Rock Band or Guitar Hero? These are games that most women can tolerate and actually enjoy! They also make for great party games when the couple is entertaining.

JEFF: Jeff is a man with a fierce temper and great thirst for high proof gin. He enjoys hiking in the woods alone, armed with nothing but a walking staff. He also owns Pat Boone's entire musical catalogue.
CE: "Gin you say? Well, assuming he doesn't drink it straight, which is not recommended by The Man Registry, he must like martinis. The Nostalgic Electrics Vintage Martini Shaker can give the kitchen or bar a little flavor and excitement. If he needs somewhere to store all of his excess gin, maybe you could also throw in The Maxam 64oz Jumbo Flask.

CHASE: Chase was the front-runner for "The Most Interesting Man In The World," but missed the final interview because of a luncheon with Tupac. For several years, Chase lived in the woods using only his beard to survive. He had no walking staff, as walking staffs are for total wusses. Chase remains the only man in the history of time to ever win a bet with God.
CE: "If he ever goes in the woods for old-time's sake, give him something that he can put to use. The Maxam 2 Person Tent will give he and his bride shelter and a good night's rest for a weekend camping trip...not that they'll be doing much sleeping..."

And there you have it: what boys like, what guys want.

Inflation's Coming for Your Christmas. Here's How Much More Your Tree Will Cost This Year.