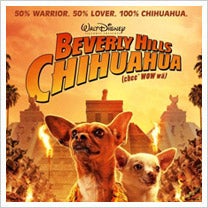 Citing a run on dogs after the 1996 movie 101 Dalmations became a hit,officials in Orange County, Calif., are warning consumers to wait a fewweeks before buying a Chihuahua after they see the comedy Beverly HillsChihuahua, which opened in theaters nationwide today. Police in SantaAna, Calif., and an official from the San Clemente/Dana Point AnimalShelter in Southern California told The Orange County Registerthat they fear families will buy the small dogs only to neglect andabandon them after excitement from the movie, about a pampered pet whogets lost in Mexico, wears off. It's not yet clear if the film will indeed be a marketing and sales bonanza for pet stores. At a PetSmart in Springfield, Mo., shelves are already stocked with Beverly Hills Chihuahua merchandise, including glasses, berets, T-shirts, sweaters, dresses, toys, shampoo conditioner and cologne--all intended for dogs. Store manager Steve Maples says the location does occasionally sell Chihuahuas but, so far, "we haven't had any increase in sales" as a result of the movie's release.