What I Learned Dining at Eatsa, an Automat Restaurant for Today's World

Human interaction is optional, but that didn't make the experience any less human.

The above chorus blared from the speakers at Eatsa, a fast-casual restaurant chain that recently opened in New York, as I entered the eatery for the first time.

I laughed to myself at the irony. Eatsa is an automat, meaning that you don't have to interact with a human being while you're there. You order and pay at a tablet kiosk (or via a mobile app), then proceed to a wall of numbered cubbies to retrieve your meal when it's ready.

A history of self-service

The concept of a restaurant without cashiers or waiters is not new. It originated in Germany in the late 19th century and inspired the first American automat restaurant, Horn & Hardart, which opened in Philadelphia in 1902. In 1912, Horn & Hardart expanded to New York City, and at its peak, there were 180 locations between the two cities.

Horn & Hardart automats were coin-operated old-school fast-food joints that served a wide range of cuisine. Just insert a nickel into a vending machine for Salisbury steak, huckleberry pie or some other type of comfort food. Horn & Hardart was especially famous for its fresh-brewed coffee.

An automat for the 21st century

Today, we're used to scanning our own groceries, checking in for flights online and increasingly ordering fast food via touchscreen. Amazon recently debuted its first Amazon Go storefront, which lacks cashiers and checkout lines and opens to the public later this year. If we can handle all of this, and we mastered coin-operated dining 115 years ago, the automat might be ready for a comeback.

Eatsa launched in San Francisco in 2015. The name Eatsa itself signifies the novelty of eating at contemporary automat.

"Since we really feel like we've created an entirely new way of experiencing food, we wanted to create a name that didn't have any existing meaning to it," Eatsa Co-Founder and Chief Design Officer Scott Drummond tells Entrepreneur.

Eatsa has four locations in California, two in Washington, D.C., and two in Manhattan. The first New York outpost, located just a few blocks from where the last Horn & Hardart once stood, opened in December 2016, and the second opened in late January 2017.

When I returned to New York after the holidays, I decided to try it for myself.

During the 15-minute walk from my office, I was already plotting what I'd eat after I finished at Eatsa. The chain serves vegetarian quinoa bowls, filled with the lightweight grain and some combination of vegetables, sauce and other fixings. I was sure I'd leave hungry. 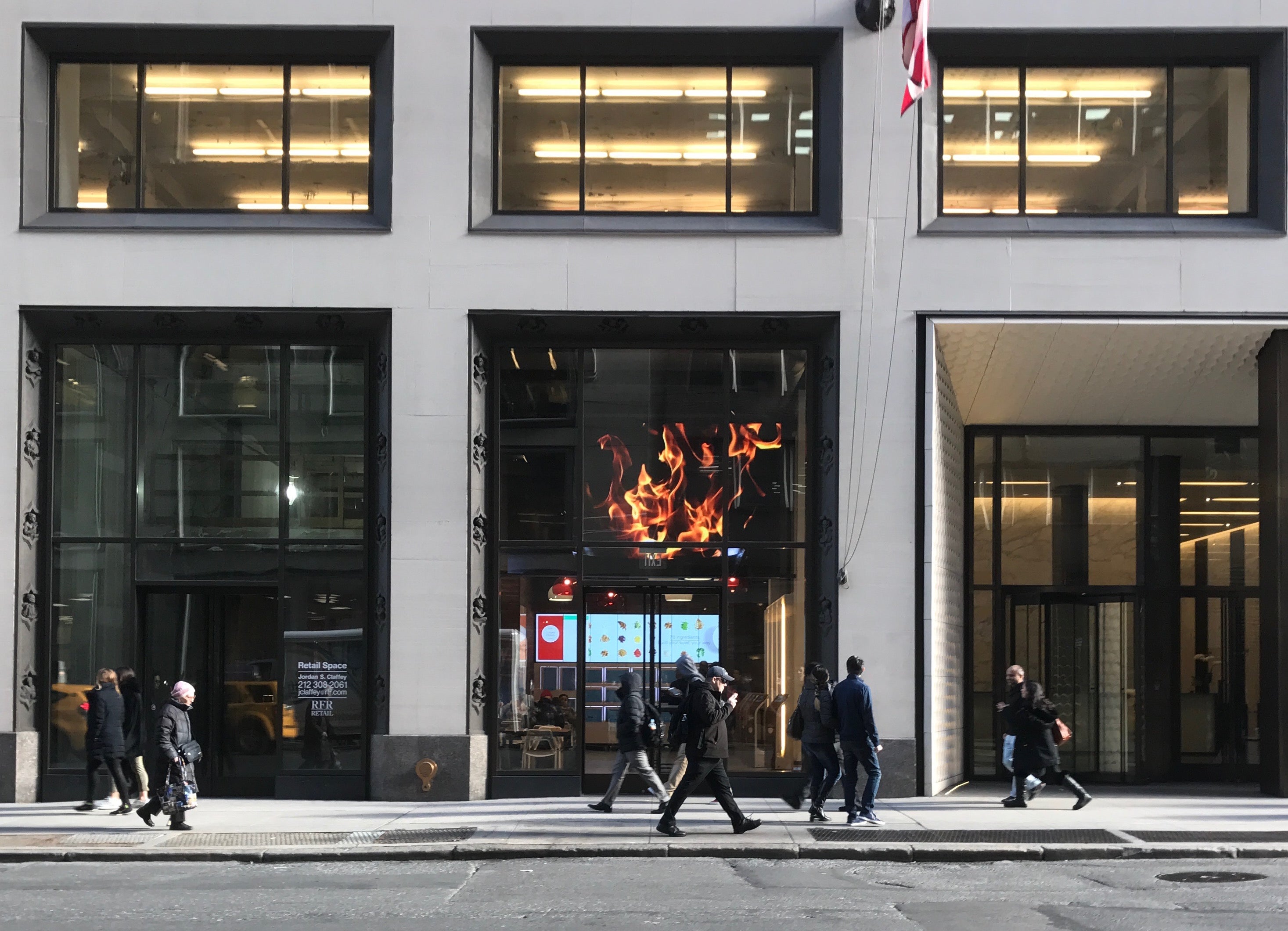 When I found it (there was no sign outside), I walked in ready to confirm my assumptions that Eatsa would be both unfilling and robotically inhuman. I purposely hadn't done much research beforehand. It didn't take me long to notice what were unmistakably Eatsa employees in red hooded sweatshirts. So it's not devoid of human connection, I thought.

The first step when you approach one of the tablets is to swipe your credit or debit card. The machine prompts you to swipe slowly. I swiped several times, but it didn't read my card, so I had to type my number in manually. So much for automation. (But hey, my card might be a bit scratched. Benefit of the doubt given.)

From there, I registered for an account with Eatsa. Returning users can view their history, which Drummond says is helpful to those who create custom orders.

"It allows us to build a much more personal relationship with the customer," he says. "We're getting to know your preferences and dietary habits."

I then browsed the meal options. I saw that the screen featured a "Get Assistance" button, in case I needed it, but it was fairly intuitive. I selected the Toscana Bowl and an iced tea. I was pleasantly surprised to discover that it only cost $8.61. My go-to build-your-own salad at the corner deli near my office costs $8.66 and doesn't come with a beverage.

Back in the day, I could've used that extra nickel to buy something at Horn & Hardart.

Related: Here's What Happened When I Replaced My Breakfast and Coffee With Soylent 'Coffiest' for a Week

There were about a dozen other people in the space when I arrived, but when I placed my order, only one customer appeared in the queue before me. It only took about two minutes for the big, bright screen to notify me that my order was ready in cubby 14. Eager to document the experience, I starting filming one of the cubbies that I assumed was number 14, due to its proximity to other numbered cubbies (the number disappears temporarily while the food is being placed in the cubby by some mysterious person in the back). The darkened cubby became animated, allowing a sneak peek of the order that sits behind its door.

As you'll see in the video above, it was not my order, nor was it cubby 14. I had to get out of the way. I then panned the camera to my already-open cubby. (Sorry, H.K., whoever you are.) 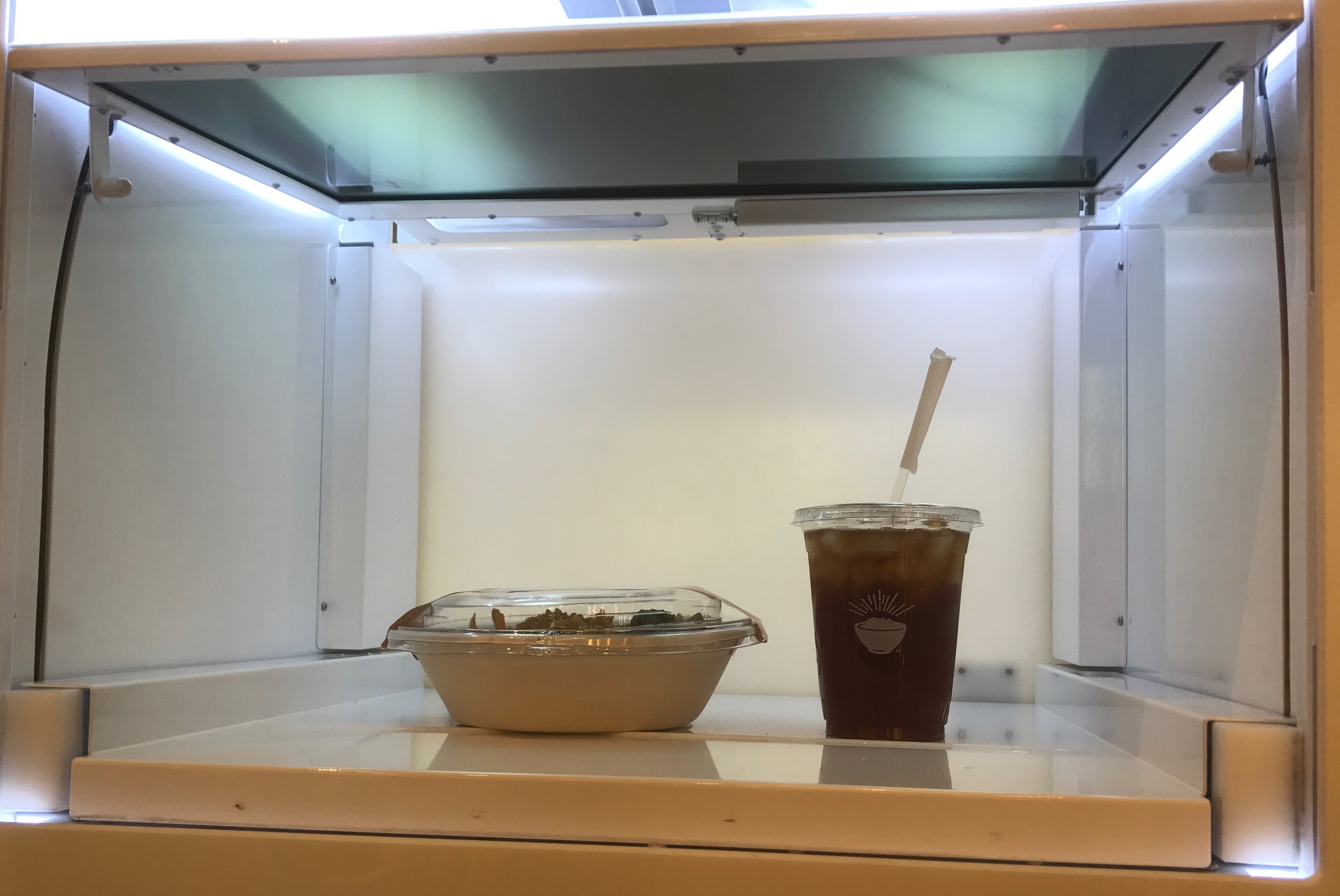 I grabbed some utensils from the dispensers, which are also automated and release only one disposable fork, knife or spoon at a time. I sat in close proximity to an already-seated pair, but I'm used to that, living in New York. I could've stood at a slim table without any stools -- this "perpendicular" eating style is a relic of automats of yore. I also could've placed it in an Eatsa-branded paper bag and taken my meal to go. 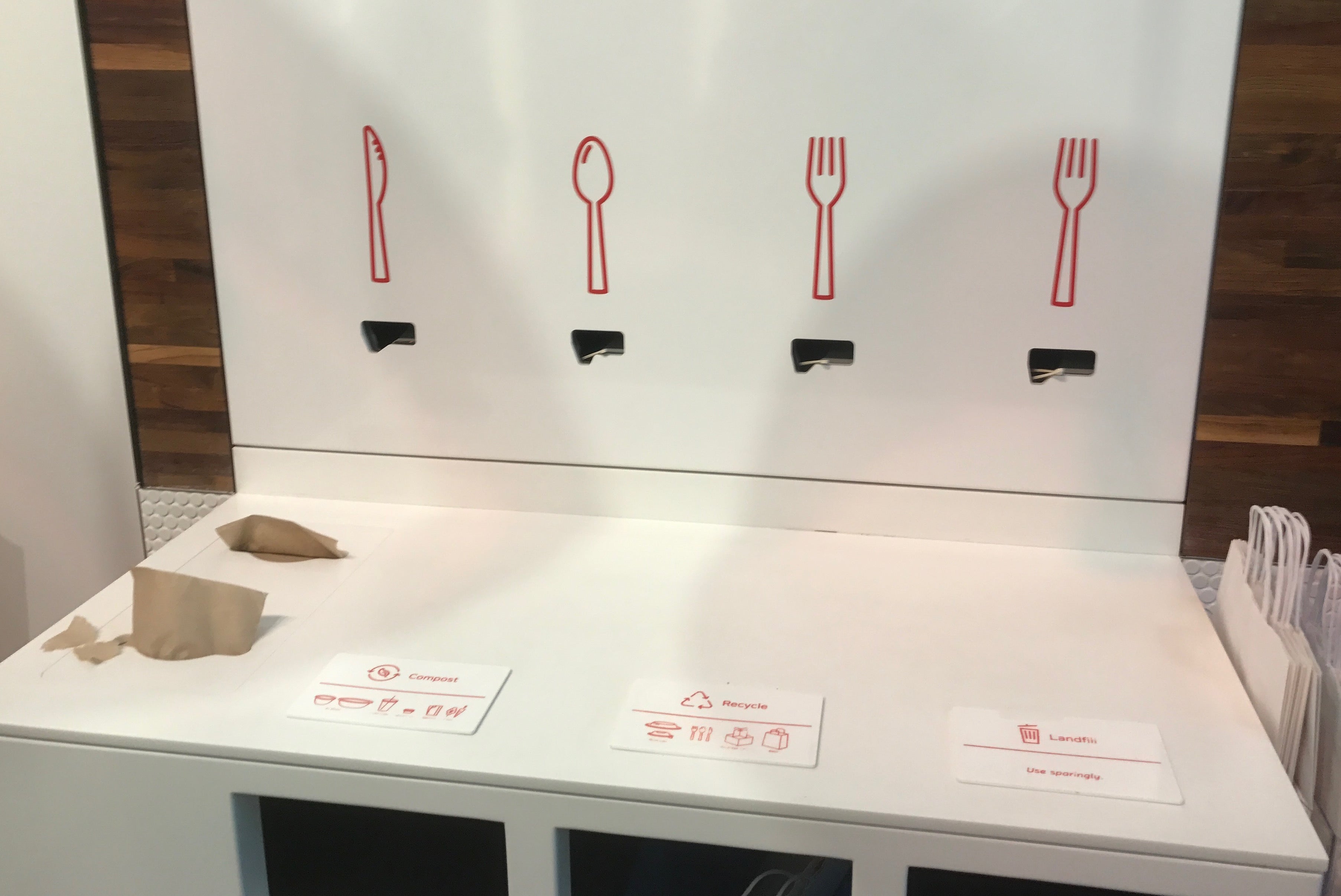 The food was surprisingly tasty and filling. I honestly would not have wanted any more than they gave me -- I could have even settled for a little less. 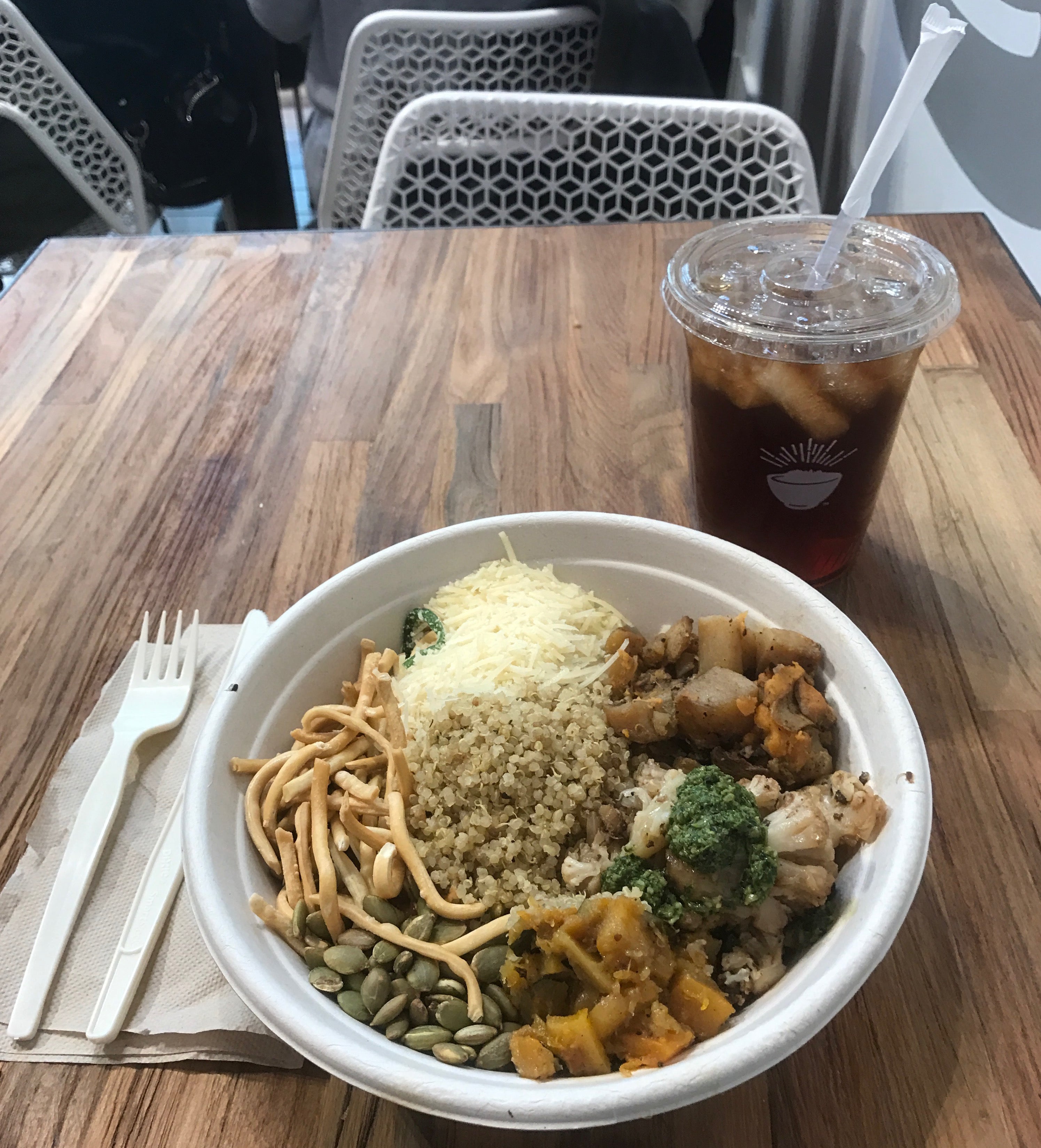 I lingered for a while, made some more observations and took a few more photos. From where I had been sitting, I hadn't noticed a large, animated screen at the front of the space, which transitioned between footage of cars on a freeway, a crisp leaf of lettuce, a group of avocados and various other images which I would categorize as either "urban civilization" or "fresh food."

I then introduced myself to one of the employees, Sydney, and asked her a few questions. Mainly, I wanted to know what her responsibilities are. She told me that she models her interactions with customers after Apple Store employees -- she's smiley and present in case customers have questions or need help. A common issue she said she deals with is cubbies that aren't working properly. 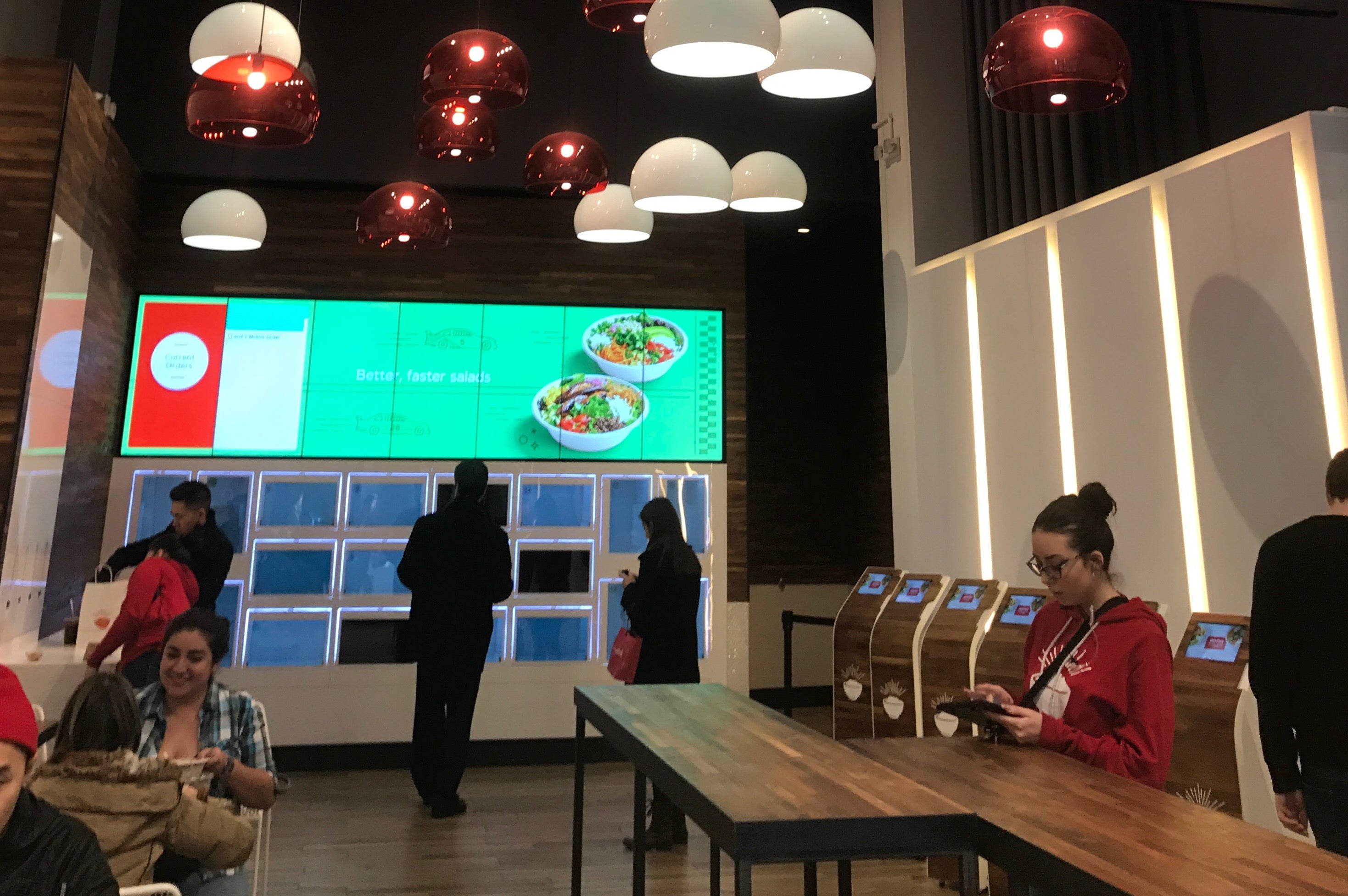 When I told Sydney that I had wanted to try Eatsa before the holidays, she said that business picked up after New Year's. I had noticed that during my visit, on Friday, Jan. 13, roughly between 1:15 and 2 p.m., there were times when there were only a handful of people in the restaurant, and times when it was full of people. Diners move through quickly.

I left Eatsa with a completely different impression than I had expected. The ambiance wasn't cold and robotic -- it was full of humanity, even when I wasn't interacting with a person. Multiple love songs poured out from the speaker system. The decor, comprised of white walls, dynamic, high-definition visuals, yellowish light and red and wooden accents, made the space feel warm and inviting. There were people everywhere, from other patrons conversing in groups to Eatsa employees scattered about and entering and exiting the back area.

The interfaces simulated human connection by cultivating first-name-basis familiarity, even with first-time customers. Of course, I was aware that real people prepared my meal, and that would have been especially evident if I'd selected the build-your-own option. It didn't seem like futuristic fare for an apocalyptic society. It was thoughtfully curated nourishment for the conscious consumer of the 2010s. Today's world didn't end up looking like late 20th century sci-fi would've led us to believe, and Eatsa is no exception.

"It's funny, because people like to have this preconceived idea that technology has to be cold and sterile," Drummond says. "In fact, what's great about the experience is that people develop these funny relationships with the cubbies. They have their name on them, they take selfies with them. People don't know how to classify it until they experience it."

I will definitely return to Eatsa. Its distance from my office is the only reason I haven't been back already. It competes with the dozens of other fast-casual lunch chains in the city on taste, quality and price. The fact that human contact is optional is still a bit unsettling to me, but the automation and simplicity is likely what keeps the prices down. And again, the human touch is evident in every aspect of the place.

For now at least.

When in Doubt, Don't: 4 Lessons to Learn from the Crypto Implosion

Before making any big investments in a hot new technology, take a full inventory of the doubts behind it.