Lindsay LaVine
February 13, 2013 8 min read
Opinions expressed by Entrepreneur contributors are their own.

Starting a business from the ground up can be at times lonely, stressful and all-consuming. Take a break and read the advice from successful entrepreneurs who've mastered the fields of technology, fashion, retail, real estate and more.

These men and women have been in your shoes and lived to tell the tale. Read on to find inspiration in their trials and triumphs. 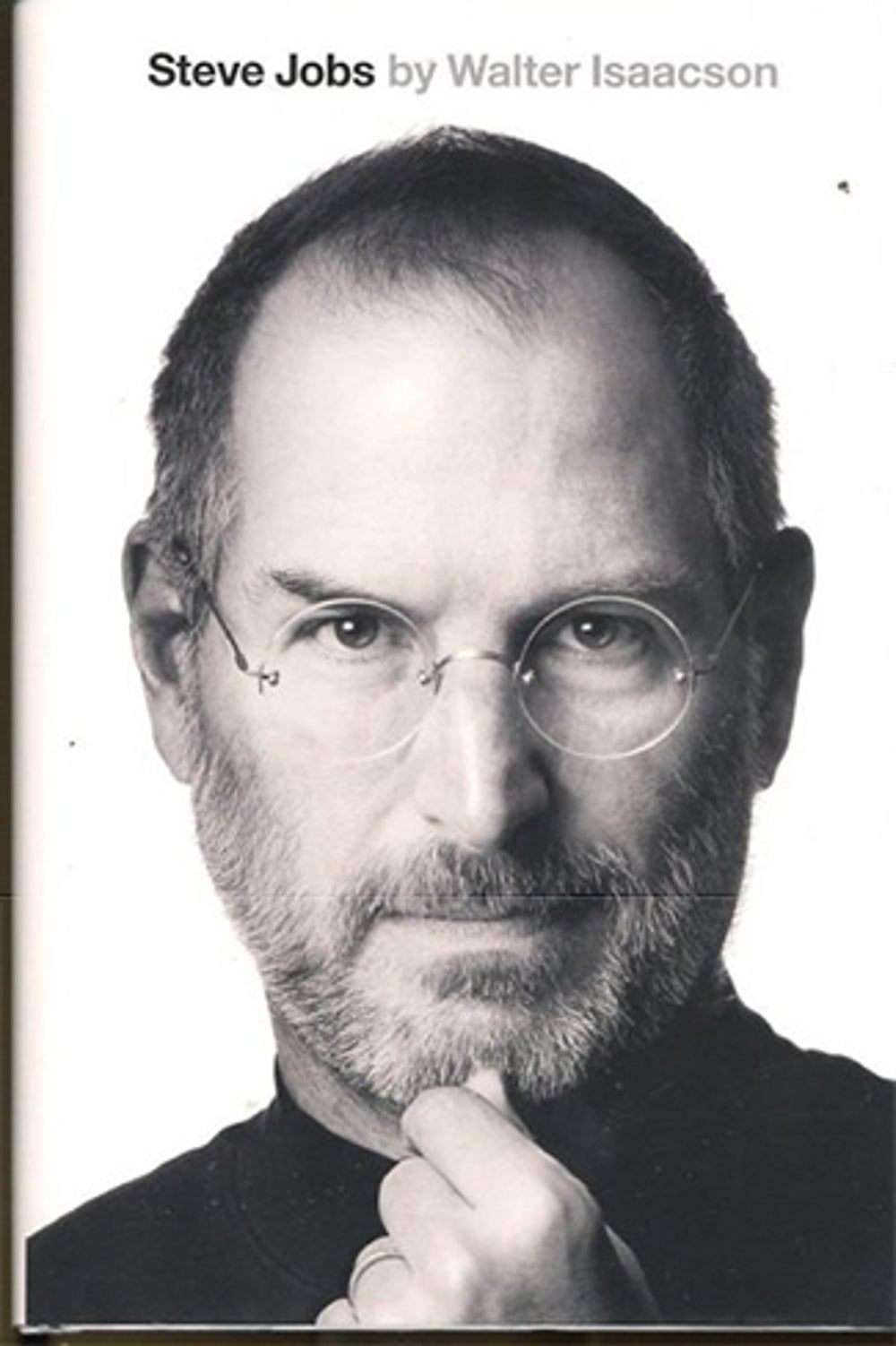 What began in Steve Jobs’ parents’ garage in the 1970s laid the groundwork for revolutionary innovation in technology. From personal computers to animated films, how we listen to and purchase music, use our phones and even read books, Jobs left his indelible print on how we communicate, entertain and live. Based on more than 40 interviews with Jobs himself and hundreds more with those who knew him, this no-limits, warts-and-all biography sheds light on a complicated man and his vision for how technology could be.

Inspirational Quote: "Remembering that you are going to die is the best way I know to avoid the trap of thinking you have something to lose. You are already naked. There is no reason not to follow your heart." -- Steve Jobs

Losing My Virginity by Richard Branson 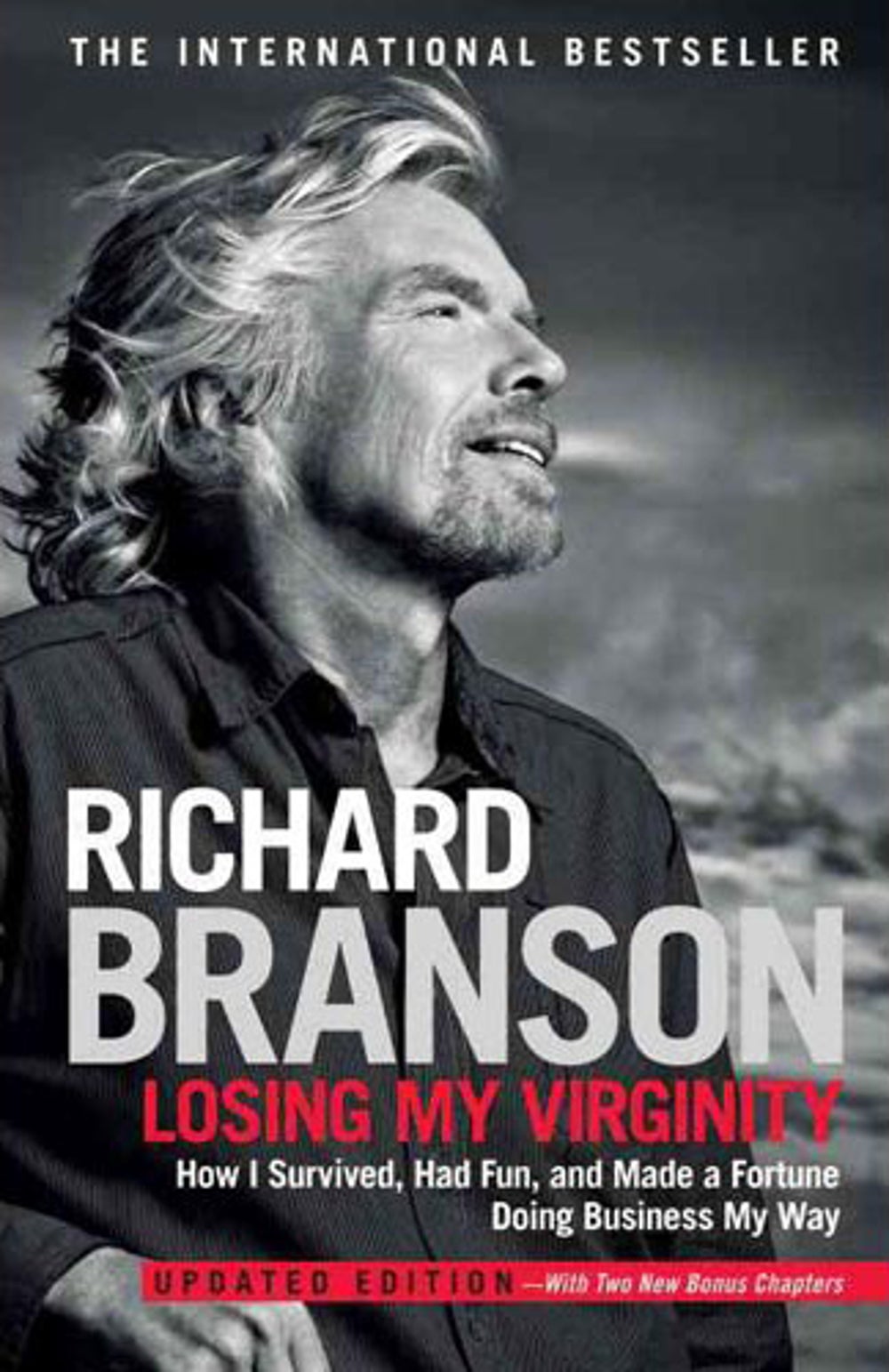 Losing My Virginity: How I Survived, Had Fun, and Made a Fortune Doing Business My Way (Crown Business, 2011)
By Richard Branson

Don’t be intimidated by the more than 600 pages in this entertaining autobiography. In Losing My Virginity, Branson, founder of the Virgin Group, shares how his early experiences shaped his later business ventures. When he met with “experts” who advised he not enter an already crowded field, Branson followed his gut, with his trademark slogan, “Oh, screw it. Let’s do it.” Part memoir, part business guide for entrepreneurs, Branson’s belief that customer service reigns supreme is a theme throughout his businesses, from airlines to mobile and beyond.

Built from Scratch by Arthur Blank and Bernie Marcus 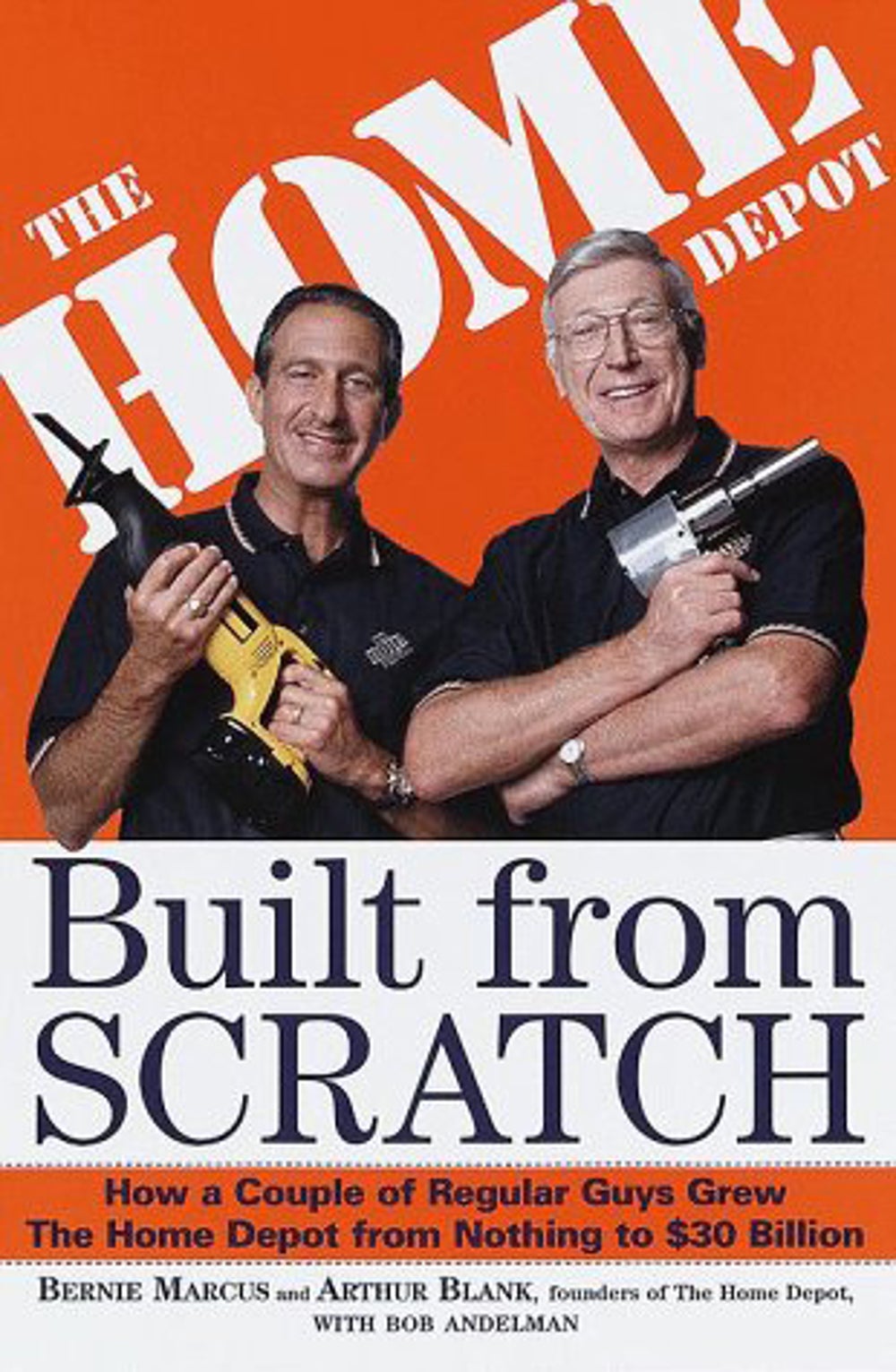 Built from Scratch: How a Couple of Regular Guys Grew the Home Depot from Nothing to $30 Billion
(Crown Business, 1999)
By Bernie Marcus and Arthur Blank, with Bob Andelman

In 1978, Bernie Marcus and Arthur Blank were executives who'd just heard the two words that strike fear in the hearts of employees everywhere: You’re fired. Their perspective changed, however, when a friend told them they'd "been kicked in the a** with a golden horseshoe." The firings, in fact, were a blessing in disguise. Built from Scratch is the inside story of how two determined executives constructed the Home Depot empire from the ground up.

Inspirational Quote: "You want a formula for success? Take two Jews who have just been fired, add an Irishman who just walked away from a bankruptcy and an Italian running a no-name investment banking firm." -- Bernie Marcus and Arthur Blank 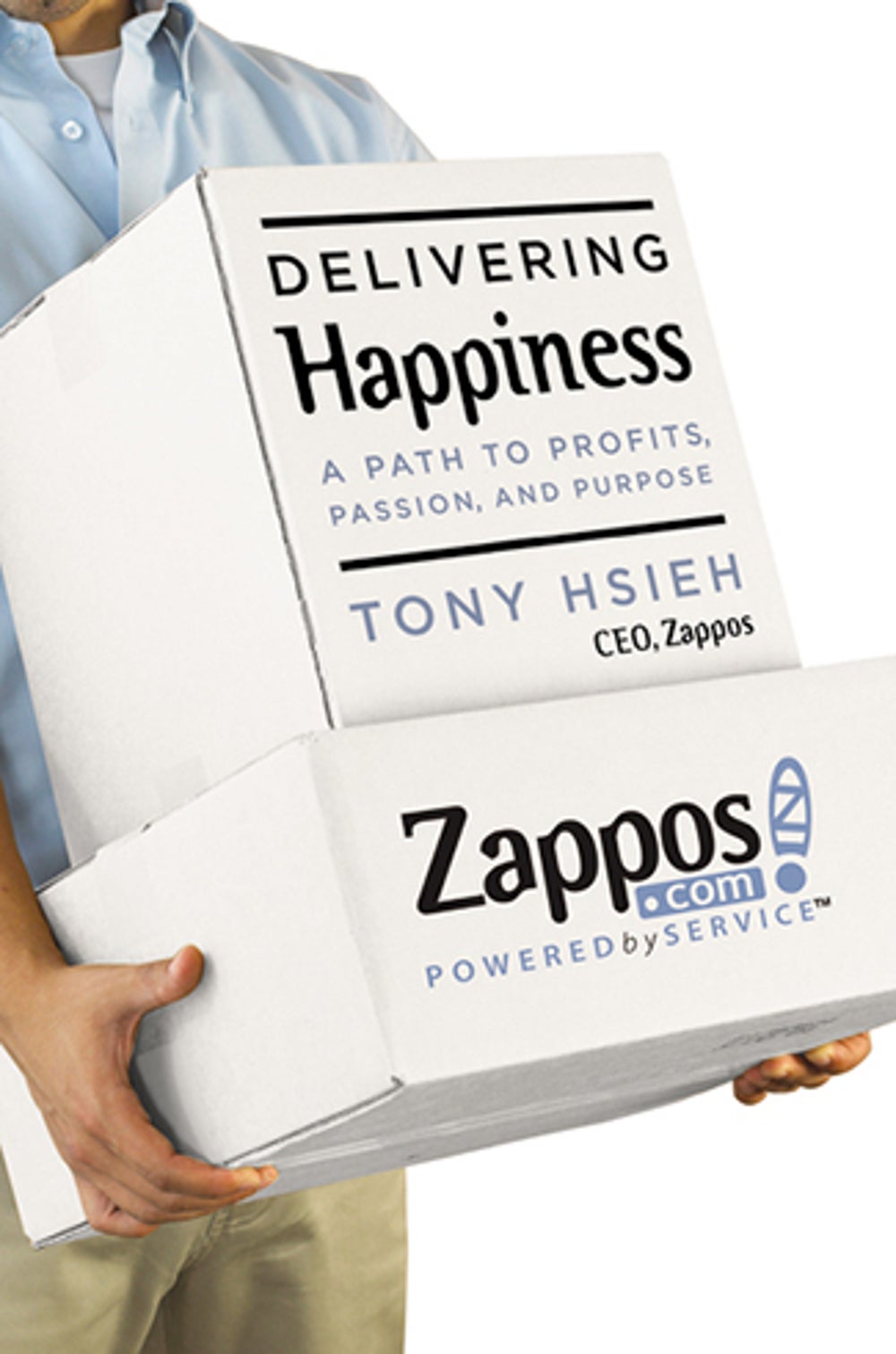 Tony Hsieh's entrepreneurial spirit emerged when he was just nine years old and launched his first business -- a worm farm. When that didn’t pan out, he moved on, undeterred, to businesses ranging from publishing a newsletter and selling it to classmates and running garage sales, all before high school. In 1998, at age 24, he sold his company LinkExchange, an online banner advertising program, to Microsoft for $265 million. He joined Zappos shortly after and helped create a company culture that infuses the science of happiness into its business model. That vision statement, to deliver happiness to the world, has drawn new and repeat customers to the site.

Inspirational Quote: "We wanted to run our own business, and be in control of our own destiny. We had no idea where it would lead us, but wherever it was, we knew it had to be better than feeling bored and unfulfilled. We were ready for an adventure."  -- Tony Hsieh

By Invitation Only by Alexis Maybank and Alexandra Wilkis Wilson 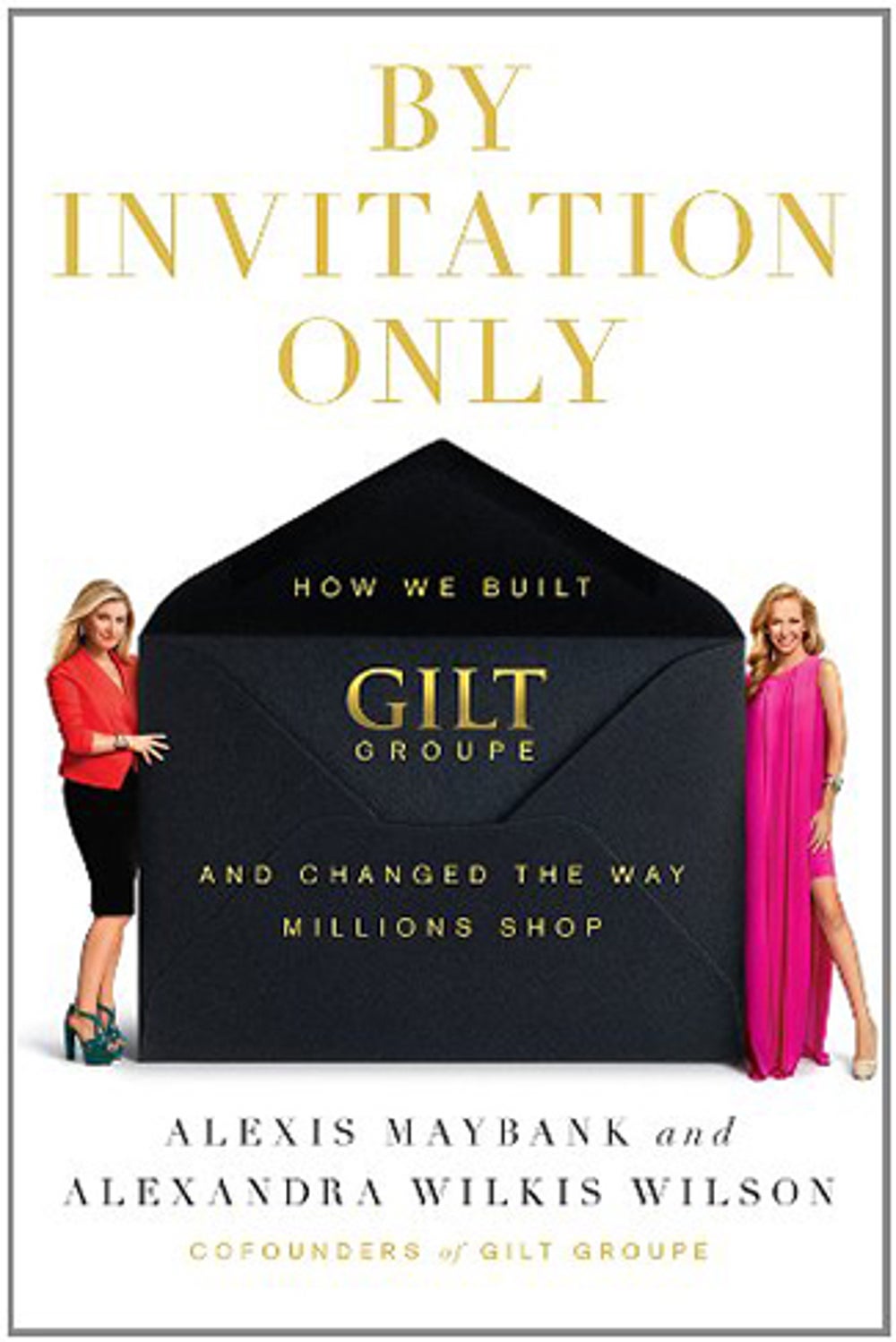 By Invitation Only: How We Built Gilt and Changed the Way Millions Shop
(Penguin Group, 2012)
By Alexis Maybank and Alexandra Wilkis Wilson

Fashionistas, rejoice! The co-founders of Gilt Group, the first invite-only online trunk show brought excitement to thousands of savvy shoppers and brought the thrill of a daily sample sale to the masses when it started in 2007. What began as a friendship at Harvard Business School over a shared love of fashion blossomed into a business reportedly valued at over $1 billion. With chapters ranging from how to hire an effective team to dealing with the recession, By Invitation Only shares the inspiring true story of one of the most successful startups of the past decade.

Inspirational Quote: "On that first day we sensed something revolutionary was happening: people were genuinely excited about Gilt. We had created a website that could potentially change the rules of retail, for both shoppers and brands." -- Alexis Maybank and Alexandra Wilkis Wilson 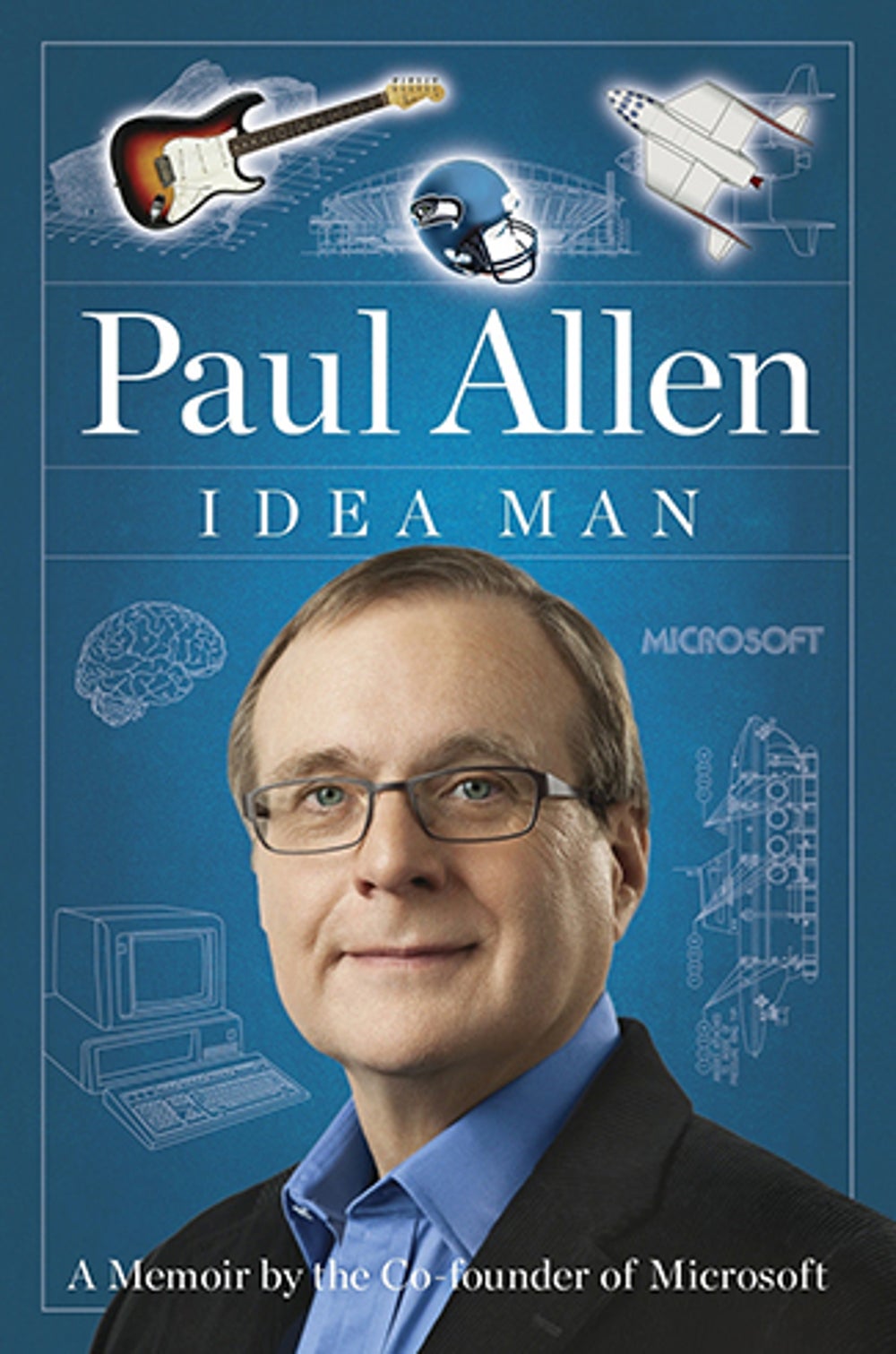 Idea Man: A Memoir by the Co-Founder of Microsoft
(Penguin Group, 2011)
By Paul Allen

In 1974 at 21 years old, Paul Allen teamed up with childhood friend Bill Gates to create programming language for the first personal computer. They worked together since their teens on professional programming jobs, but believed they were the ones who could write the code that, at the time, engineers didn’t believe was possible. The famously private Allen opens up about the founding of Microsoft, as well as his adventures after he stepped down from the company he helped create (advances in space travel and brain mapping, to name a few). 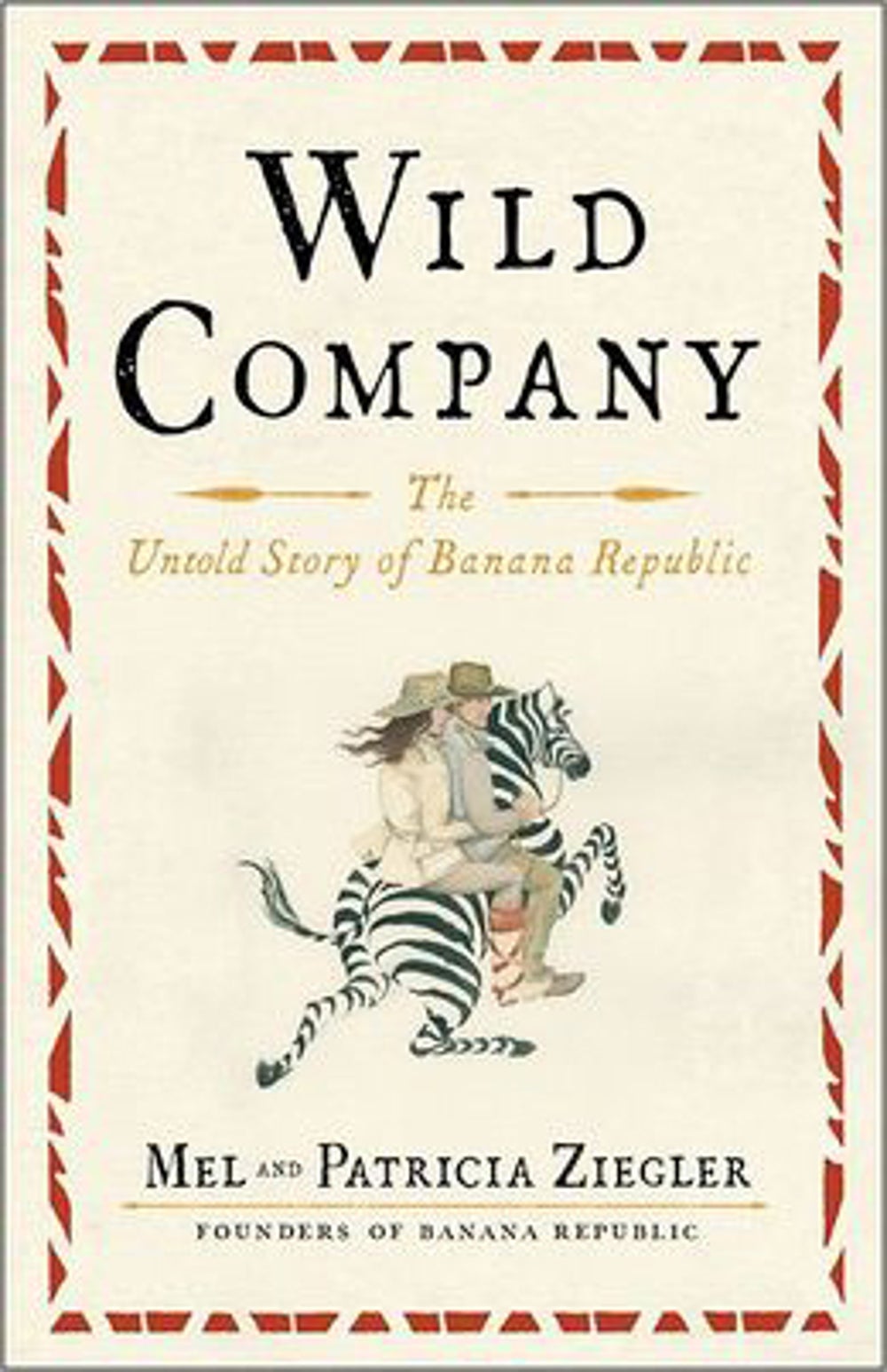 When Mel and Patricia Ziegler met (in the newsroom of the San Francisco Chronicle) they wanted to travel the world, but as a young writer and artist they lacked the money or means to do so. Wild Company tells the story of how the pair, armed with creativity and passion (but no business training), built an empire from military surplus clothing finds plucked from their travels to create Banana Republic.

Inspirational Quote: "The only asset we had was our own oblivion. That would keep us blissfully ignorant of the bewildering and arbitrary impediments that would entangle us until we became so embroiled that quitting was no longer a possibility." -- Mel Ziegler

Start Something That Matters by Blake Mycoskie 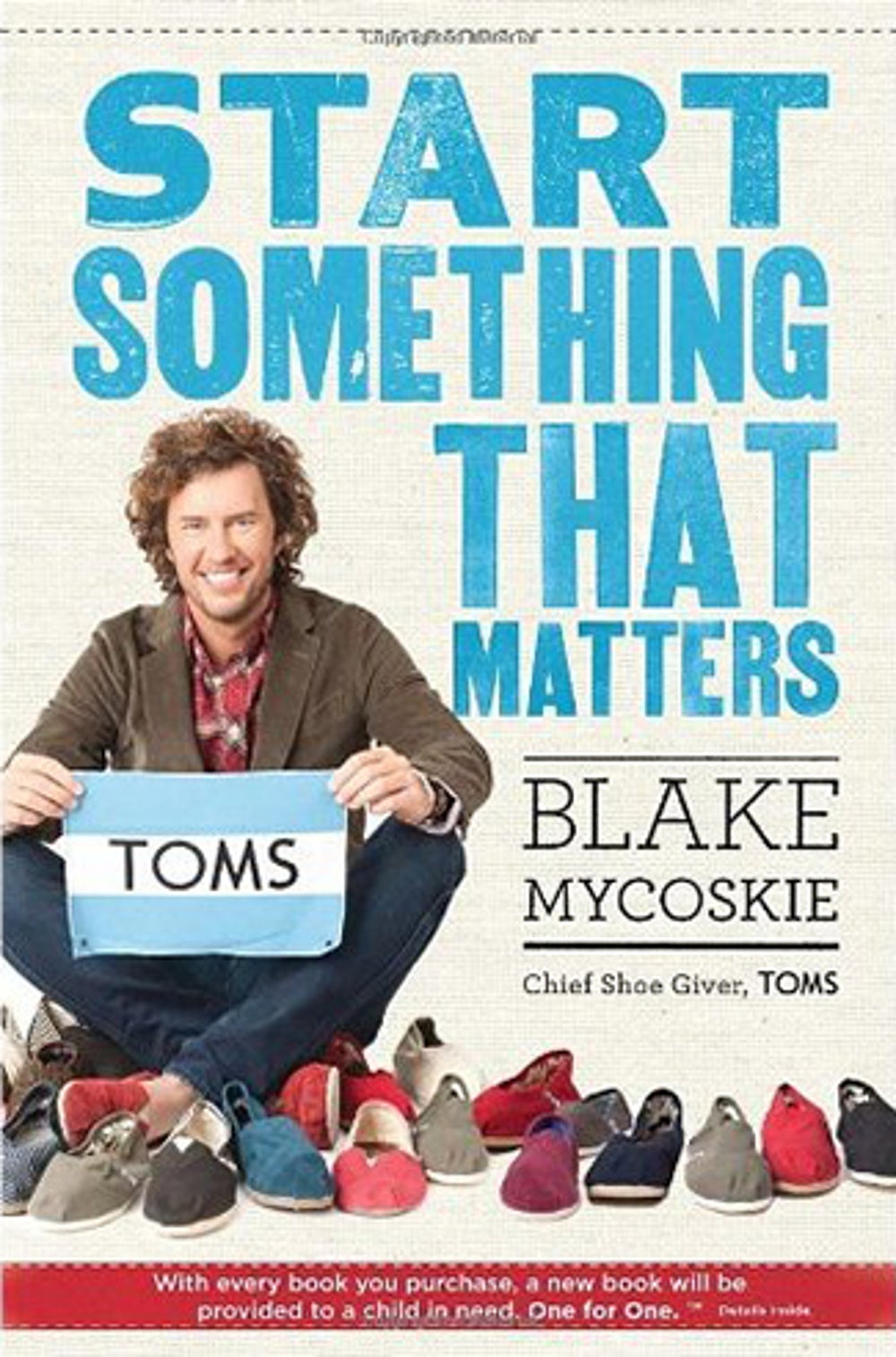 Start Something That Matters
(Spiegel & Grau, 2011)
By Blake Mycoskie

In 2006, Blake Mycoskie traveled to Argentina to take some time off from his fourth startup and explore the culture of another country. What he found was a great need among children’s charities for shoes. Mycoskie knew he had to help, and the idea for TOMS shoes was born. The concept for the company is simple: Sell a pair of shoes today, give a pair of shoes to a child in need tomorrow. Mycoskie shares with readers lessons learned while creating TOMS, how to develop and tell your company’s story, and how to be resourceful without having resources.

Inspirational Quote: "You don't have to have a lot of money, a complicated business plan, or a great deal of experience to start something." -- Blake Mycoskie 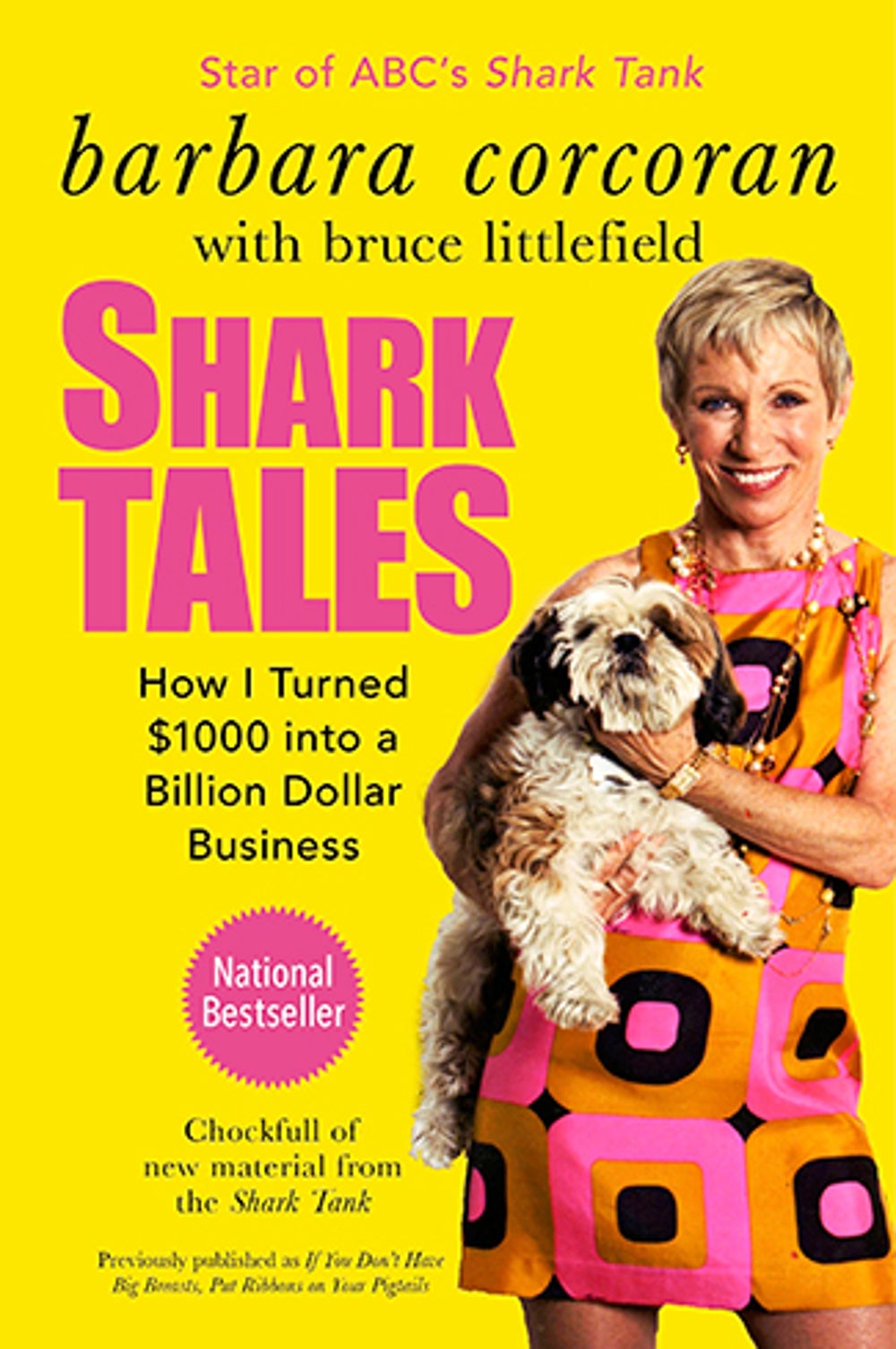 Shark Tales: How I Turned $1,000 Into a Billion Dollar Business
(Penguin Group, 2011)
By Barbara Corcoran with Bruce Littlefield

Before becoming one of the Sharks on ABC’s Shark Tank, Barbara Corcoran held 22 jobs by the age of 23. It was number 23, a small real estate company that would eventually lead her to founding the Corcoran Group, a $6 billion dollar company. Combining lessons learned from her childhood in New Jersey among nine brothers and sisters with lessons from the cut throat world of New York real estate, Corcoran offers entrepreneurs valuable advice for starting their own business.

Inspirational Quote: "The story of my billion-dollar business starts like this: I borrowed $1,000 from a friend." -- Barbara Corcoran

The Martha Rules by Martha Stewart 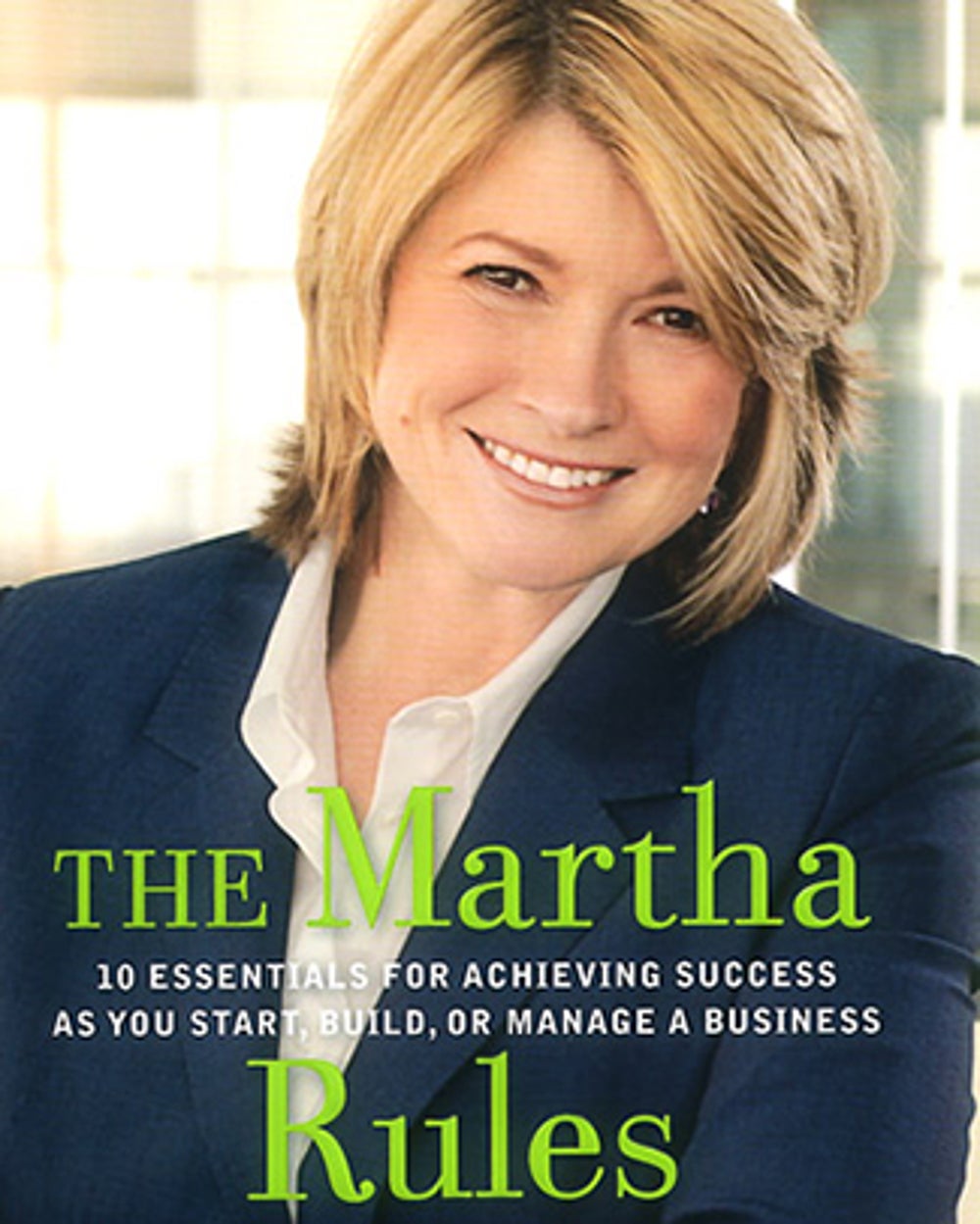 The Martha Rules consists of ten rules and a roadmap for entrepreneurs to create their own successful businesses. The book started as a project to help fellow inmates during her incarceration in a federal prison in 2004. The Martha Rules examine the importance of passion, quality, growth and taking risks. The first chapter, for example, is devoted to finding your passion and developing a business. Later chapters tout the importance of continued learning, innovation, and surrounding yourself with the right people.

Inspirational Quote: "Build your business success around something that you love -- something that is inherently and endlessly interesting to you." -- Martha Stewart