Since its inception in 2005, YouTube has grown from a site devoted to amateur videos to one that distributes original content.

It played an instrumental role during the Arab Spring, and has also helped jumpstart the careers of Justin Bieber and Korean pop sensation Psy.

Chad Hurley registers the trademark, logo, and domain of YouTube on Valentine's Day 2005

Before Feb. 14, 2005, very few people had ever even heard the name "YouTube." It was founded by former PayPal employees Chad Hurley, Steve Chen, and Jawed Karim. The idea was born at a dinner party in San Francisco about a year before the official launch.

Karim's idea for what became YouTube came from two key events in 2004: Janet Jackson's wardrobe malfunction at the Super Bowl, and the devastating tsunami in the Indian Ocean, Karim told USA Today back in 2006.


Related: The New York Times Explains Why GIFs Are So Popular Right Now 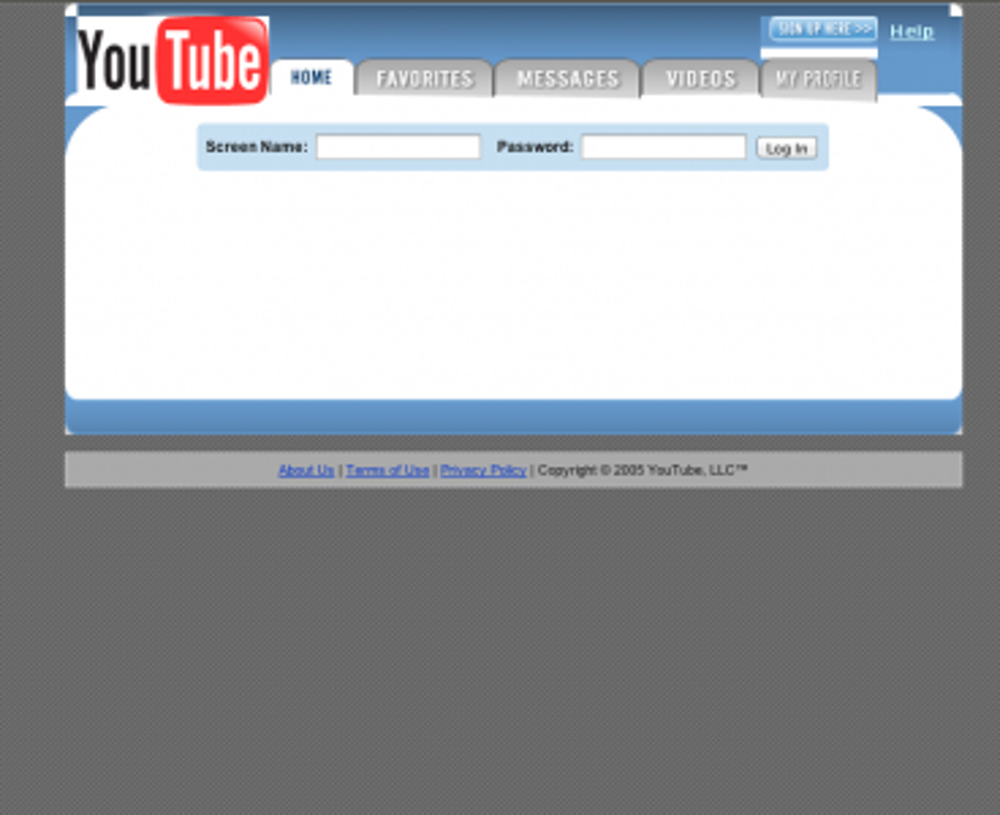 Wow. It's amazing how much YouTube's homepage has evolved since it's very first one in 2005.

The first video posted to the site, 'Me at the Zoo,' was only 19 seconds long 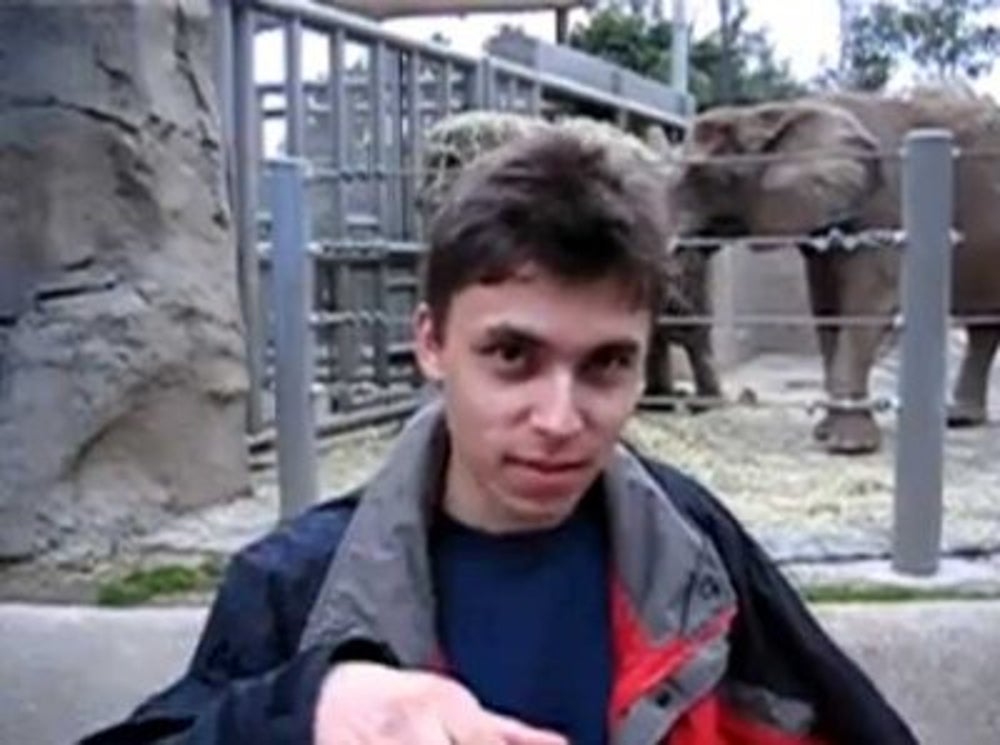 On April 23, 2005, YouTube co-founder Jawed Karim posted the very first video to YouTube, entitled "Me at the Zoo." The video is exactly how it sounds: Karim at the San Diego zoo standing in front of the elephants and talking about their trunks.

In September 2005, YouTube got its first one million-hit video 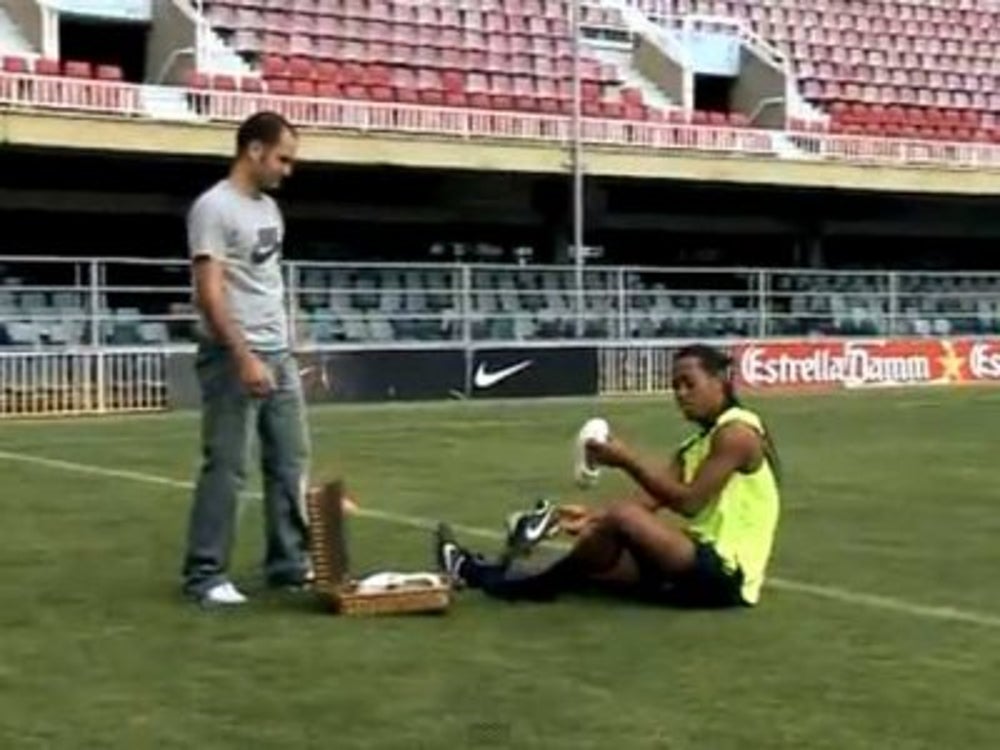 The video was a Nike ad that went viral. It was a clip of Brazilian soccer player Ronaldinho receiving his pair of Golden Boots. Nike was also one of the first major companies to embrace YouTube's promotional potential. 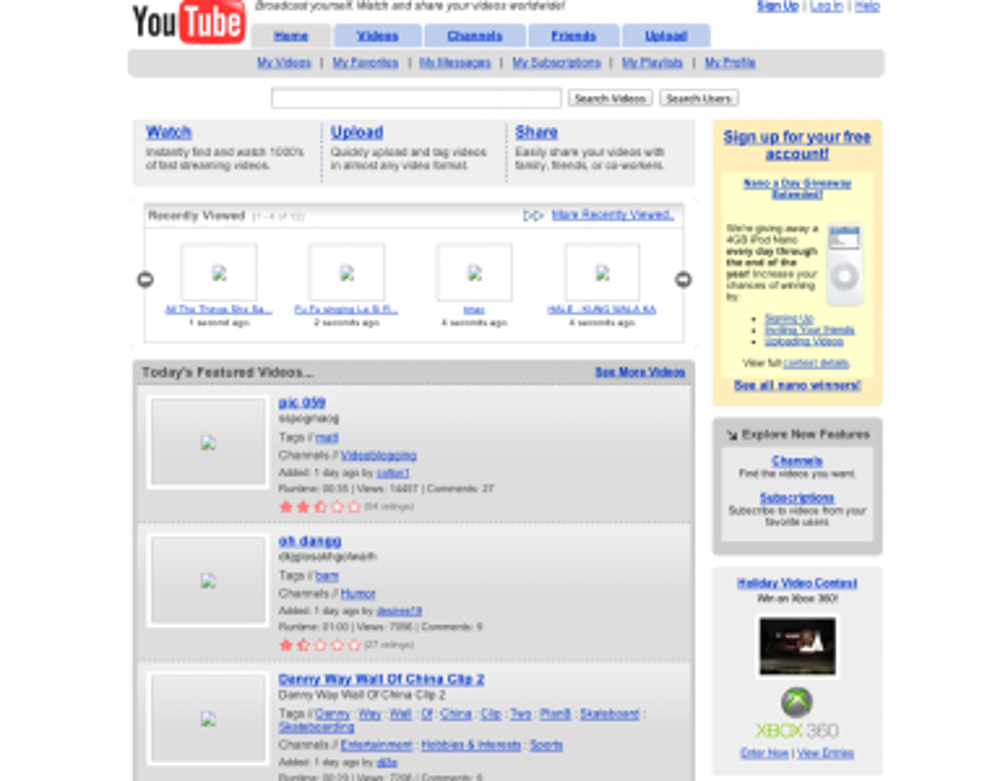 Following a $3.5 million investment from Sequoia Capital in November 2005, YouTube was able to increase its bandwidth, improve its servers, and launch to the public. 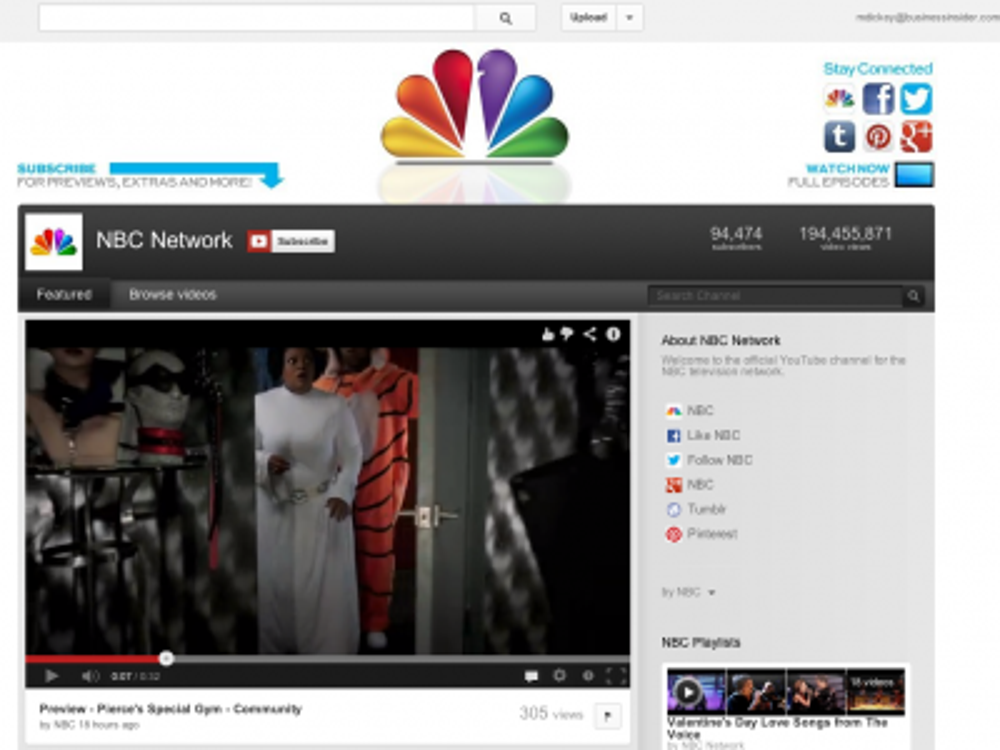 In February 2006, NBC asked YouTube to pull a clip from Saturday Night Live called "Lazy Sunday," which ended up attracting a lot of attention to the video-sharing site. YouTube complied and in October 2007, it launched its Content Verification Program to help content owners like NBC locate and remove video that infringes on their copyrights.

But flash forward a few months, and NBC changed its tune. As part of the deal, YouTube would promote NBC's fall TV lineup. This deal marked the beginning of several key partnerships with content providers later down the road.

Google saw the potential in YouTube and acquired the video-sharing site for $1.65 billion in October 2006 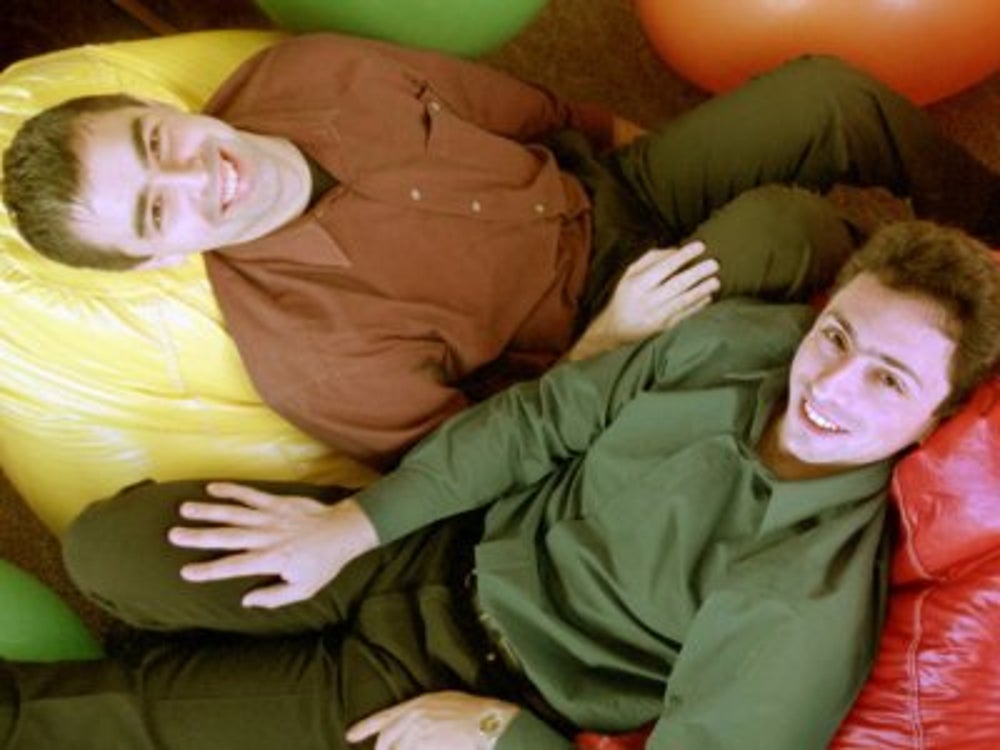 Google acquired the rapidly growing video-sharing site for more $1.65 billion. At the time Google called it "the next step in the evolution of the Internet." At the time, YouTube only had roughly 65 employees. 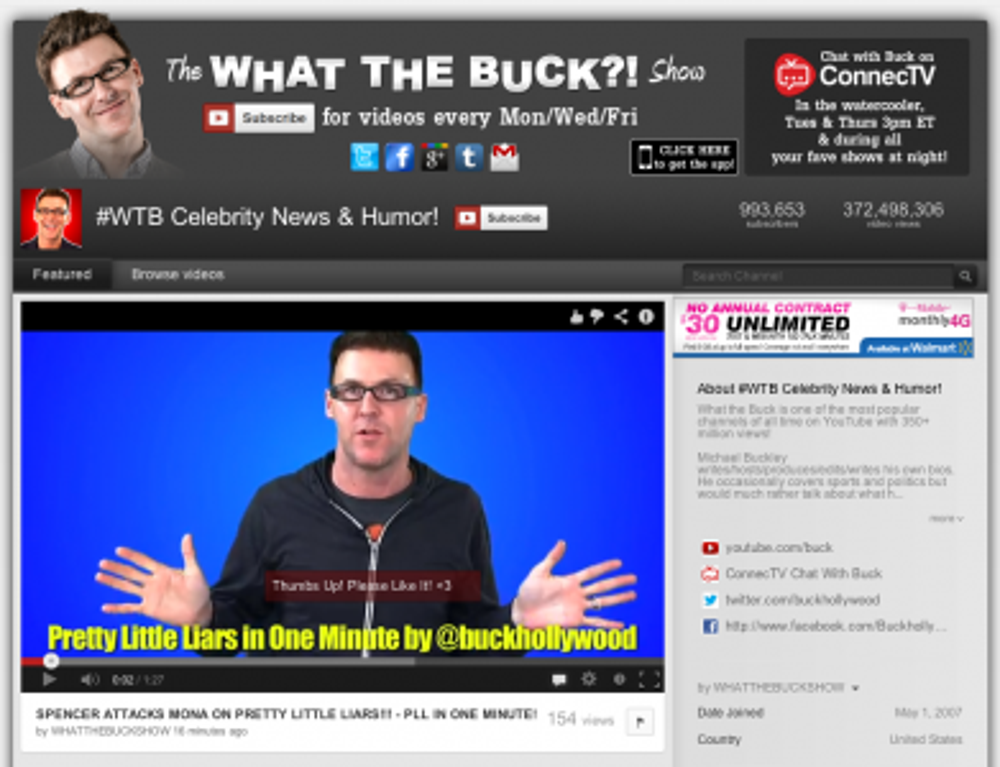 This was the first time YouTube made it possible for everyday people to turn their hobbies into a business. About a year later, the most successful users were earning six-figure incomes from YouTube, The New York Times reported in 2008.

Michael Buckley, for example, was able to quit his day job after he realized his YouTube show, The What The Buck Show, earned him more money than the salary from his job as an administrative assistant at a music promotion company. 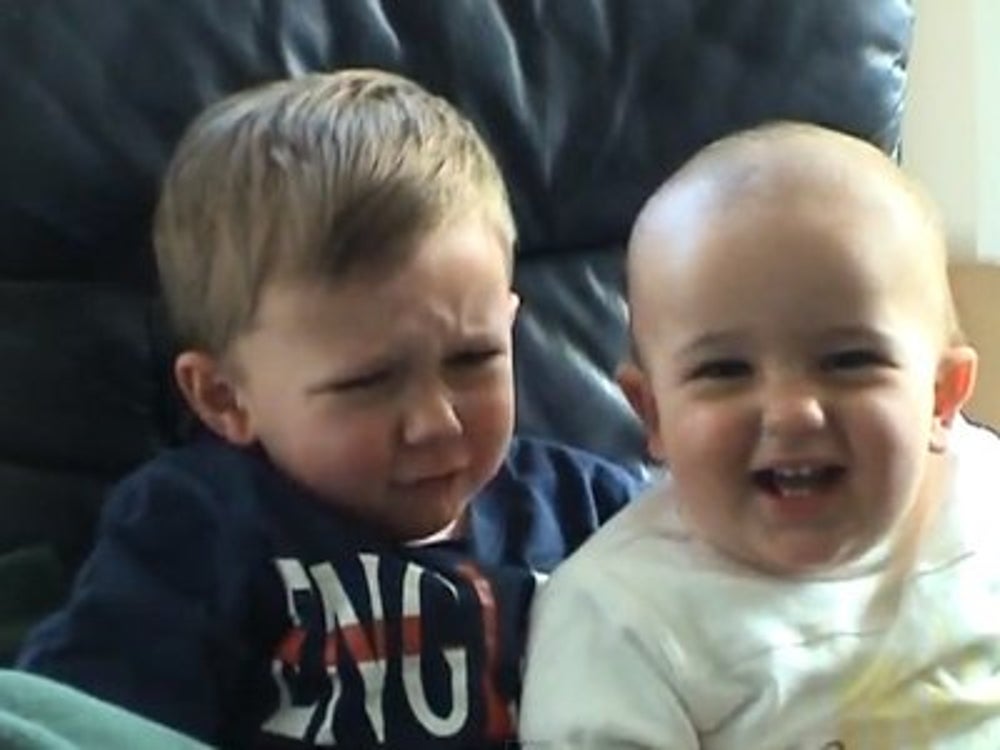 This 56-second viral video of a toddler biting his brother's finger and then smiling is one of the most watched YouTube clips. At the time of publication, the video has half a billion views.

In July 2007, YouTube teamed up with CNN to host the presidential debate for the 2008 election cycle 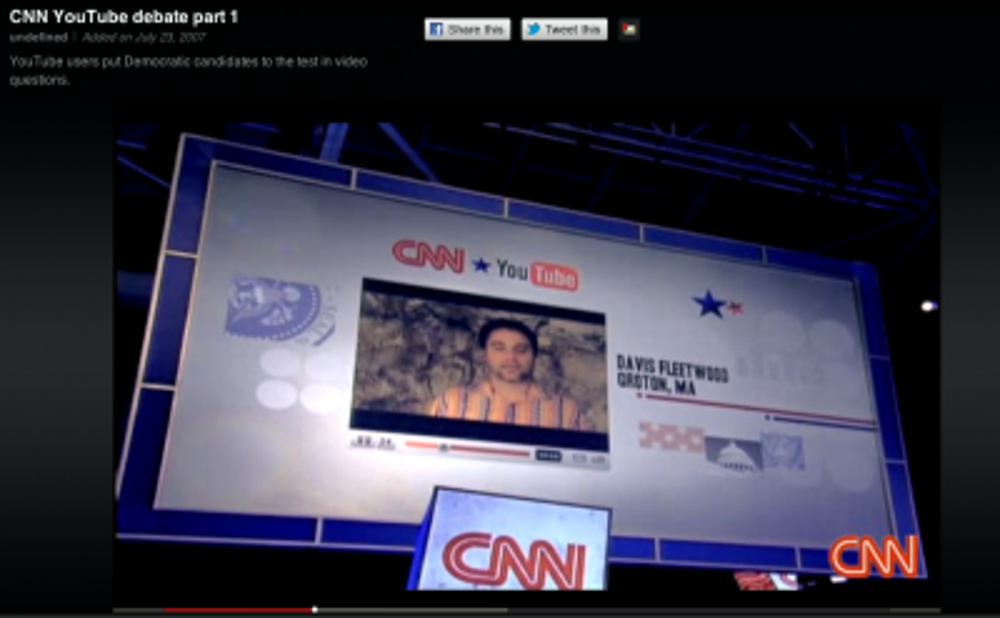 Seven out of the 16 presidential candidates announced their campaigns via YouTube. In July, YouTube and CNN hosted their first presidential debate, featuring citizen-submitted video questions.

This was also the first time in presidential debate history where user-generated video drove the debate. 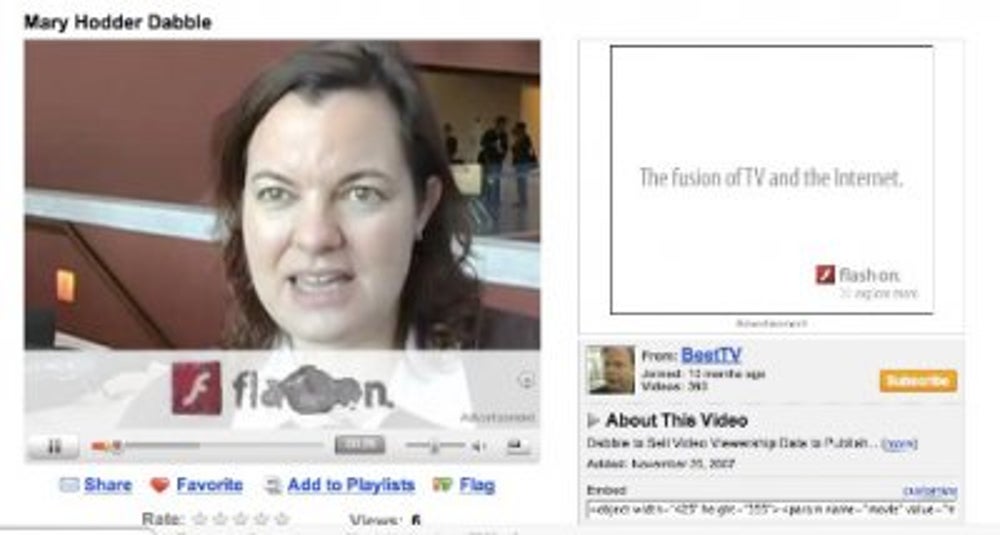 The first advertisements were semi-transparent banners that popped up on the lower 20% of videos. The overlaid ads would appear about 10 to 15 seconds into the video. It was Google's first response to questions about how the search giant would make money from its video site.

In April 2009, Usher introduced the world to Justin Bieber via a video on YouTube 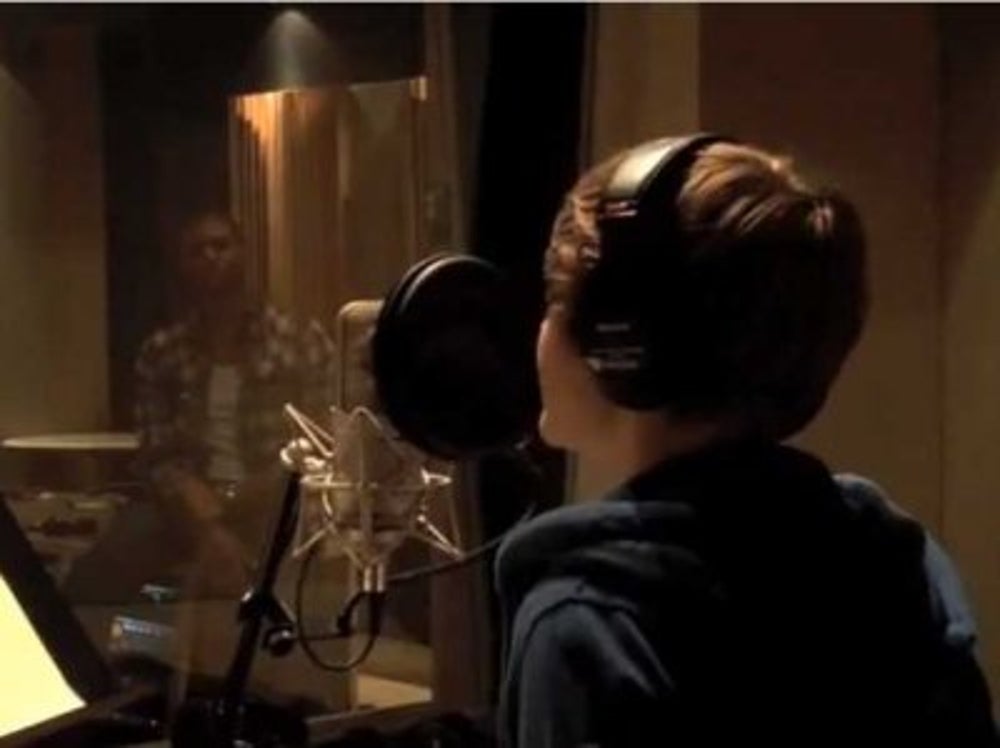 Usher also announced that Bieber signed a recording contract with Island Def Jam records. Now, Justin Bieber's Baby is one of the most viewed videos on YouTube, with more than 820 million views.

That month, YouTube also won a Peabody Award for its achievements in electronic media. 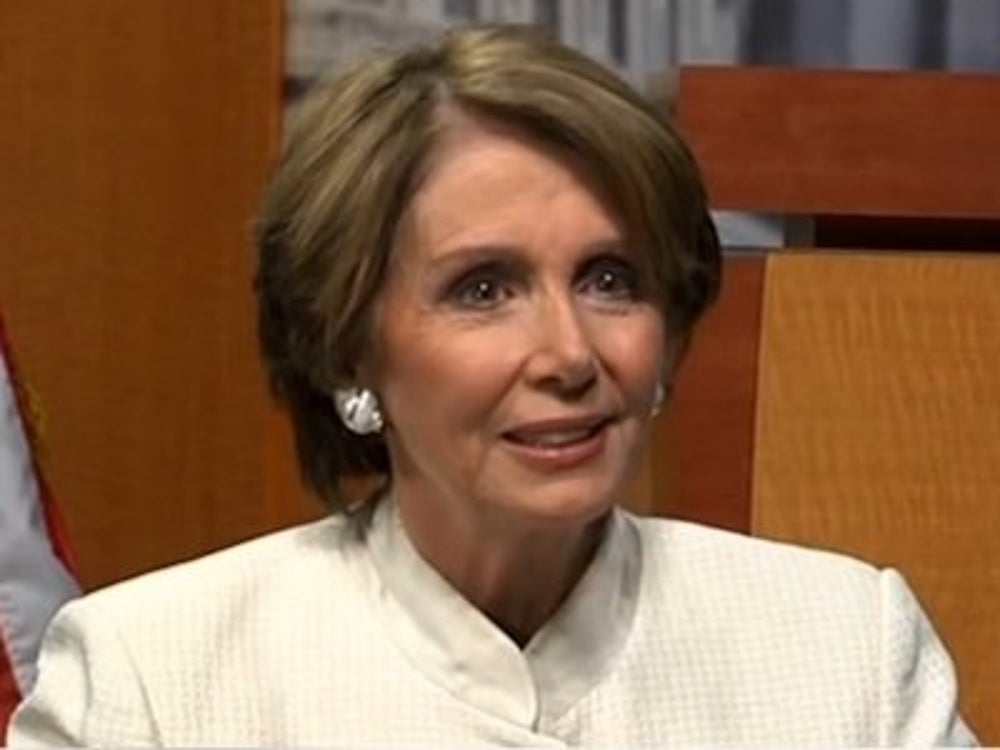 In January 2009, the 111th U.S. Congress hopped on the bandwagon and launched official Congressional YouTube channels. Doing so has helped American citizens attain a level of access to the government that was never before possible.

A month later, The Vatican launched its own YouTube channel.

During the 2011 Arab Spring, YouTube played an instrumental role in disseminating messages of freedom and democracy 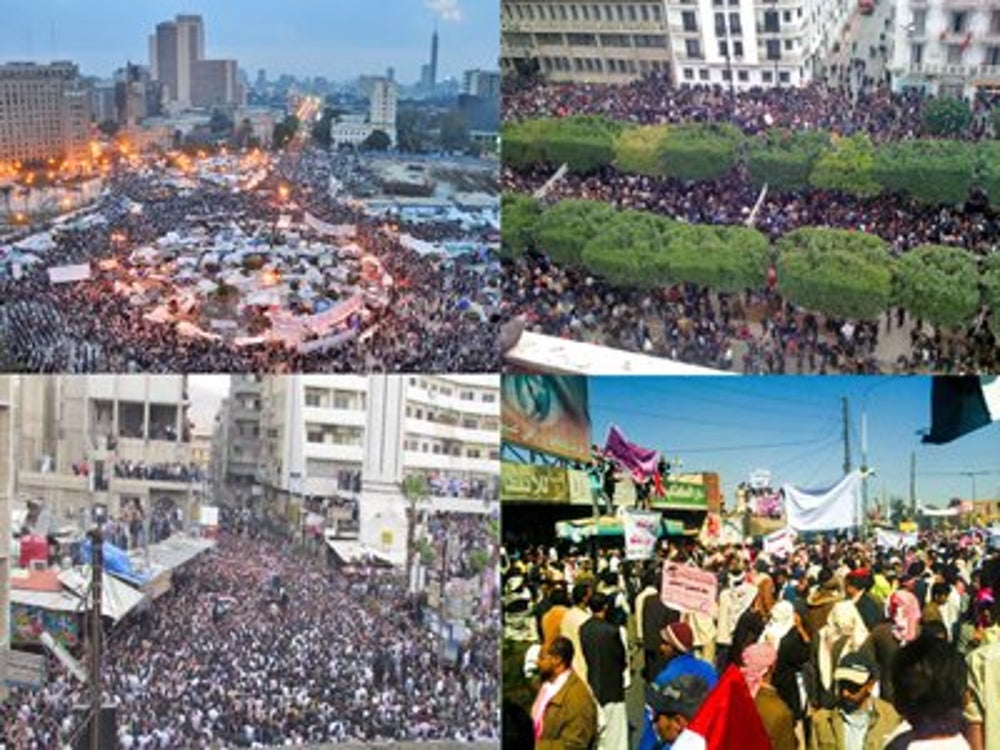 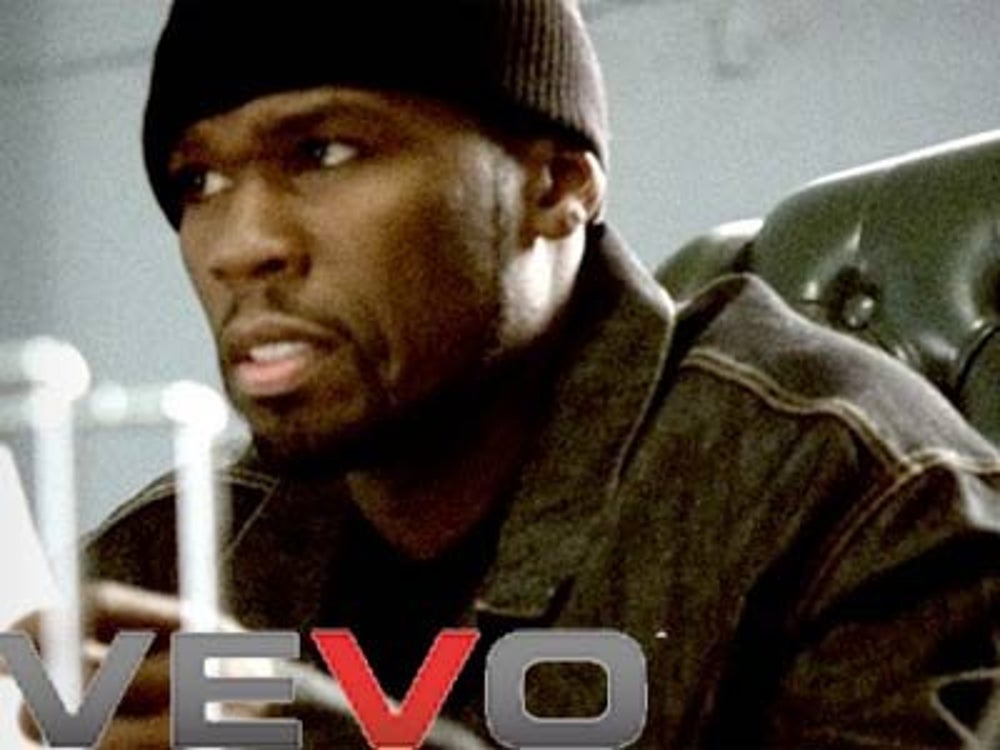 This was YouTube's first move to fix its relationship with music companies, which had complained about piracy and unfair licensing terms.

Now, YouTube is looking to make a $50 million investment in the company at a $500 million valuation. 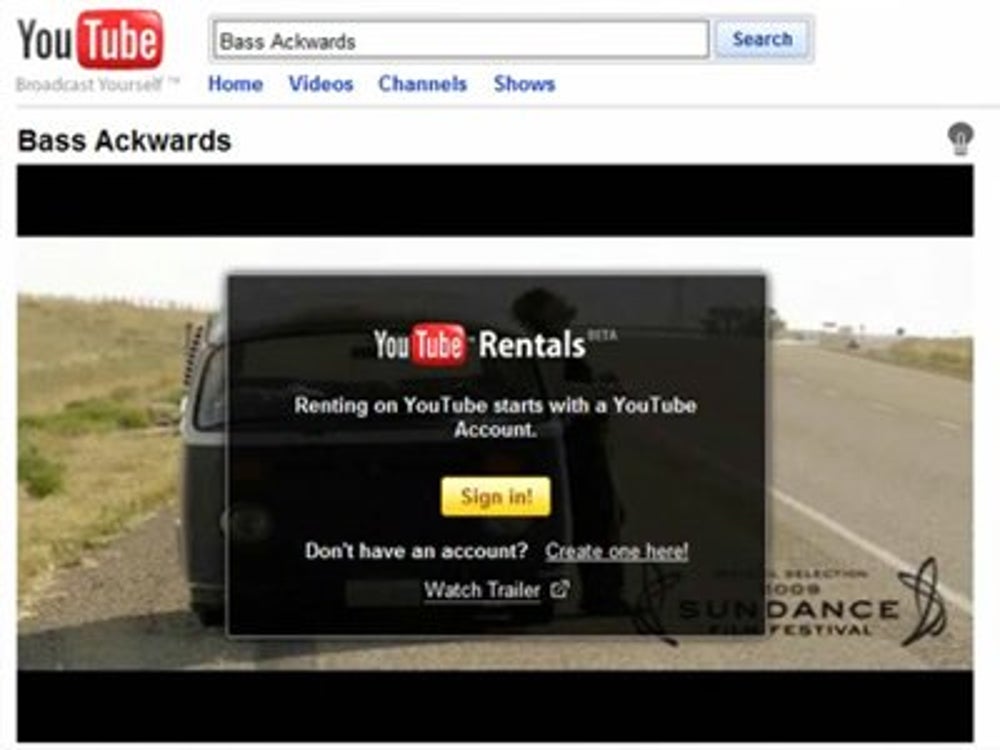 YouTube's entrance into Netflix and Apple's turf marked the first time it became clear YouTube was trying to be more than just an amateur video-sharing site.

It started with a few movies that did well at Sundance, and has since grown to offer movies from companies including Paramount, Disney, NBC/Universal, Sony, and Warner Brothers.

In October 2010, columnist Dan Savage used YouTube to launch the "It Gets Better" project 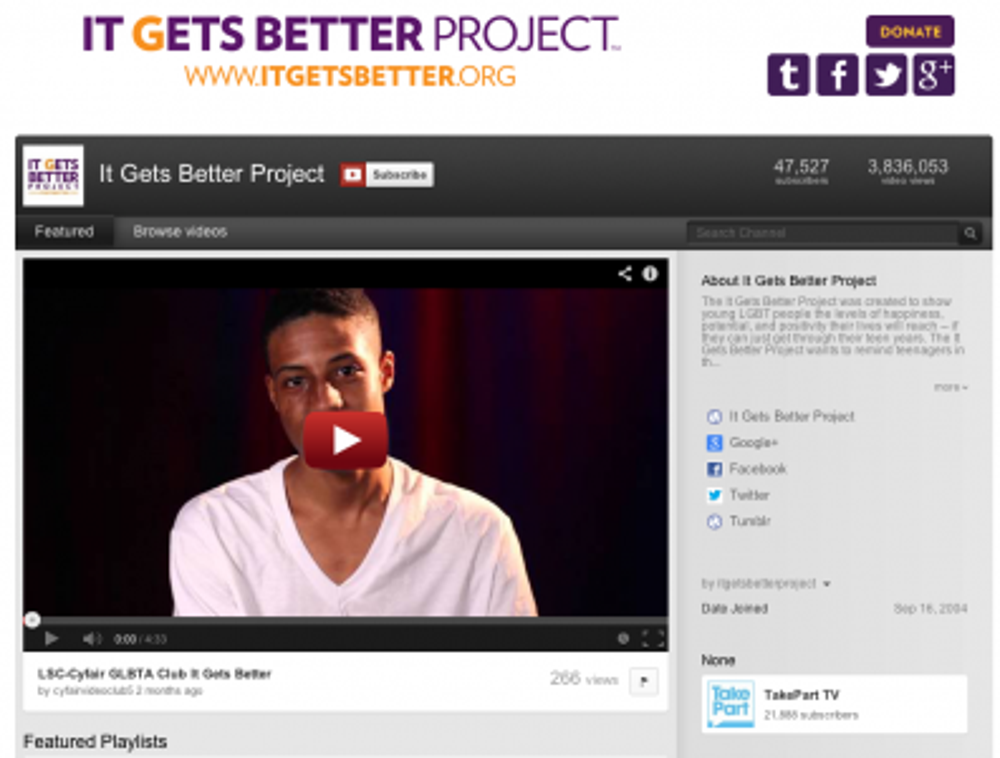 Dan Savage launched the "It Gets Better" campaign on YouTube to send messages of hope to LGBTQ teenagers who felt bullied or ostracized because of their sexuality.

The campaign ended up going viral, and even President Barack Obama participated. 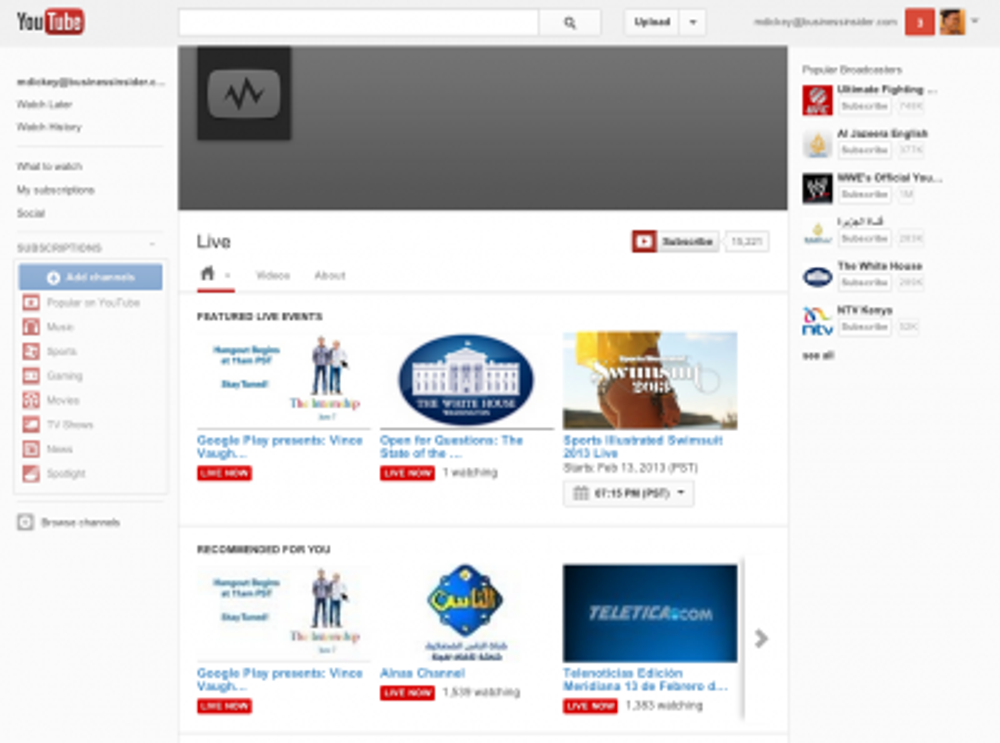 In April 2011, YouTube officially entered the broadcast business with the launch of YouTube Live. YouTube Live has allowed the site to stream everything from concerts to news coverage to to the royal wedding to the Olympics. 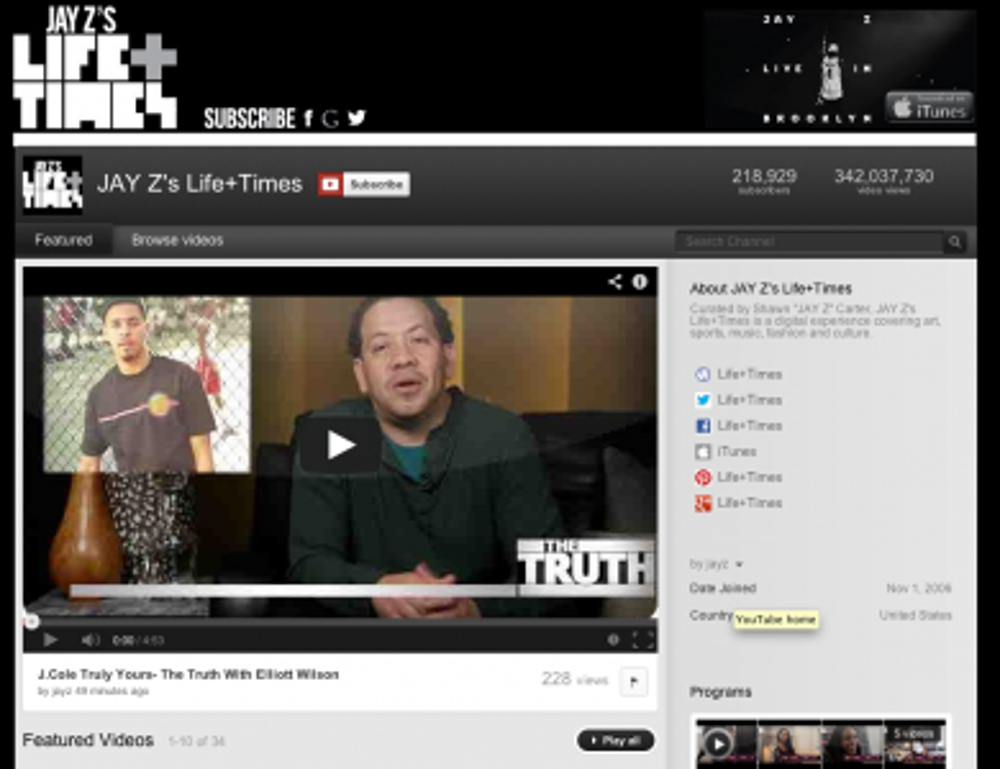 Now, YouTube is acting even more like a traditional television network and only renewing shows that do well. Some of the more popular channels include MondoMedia, Howcast, Jay Z's Life + Times, and TheOnion.

For the first time ever, people all over the world were able to watch a live-stream of the Olympics in July 2012 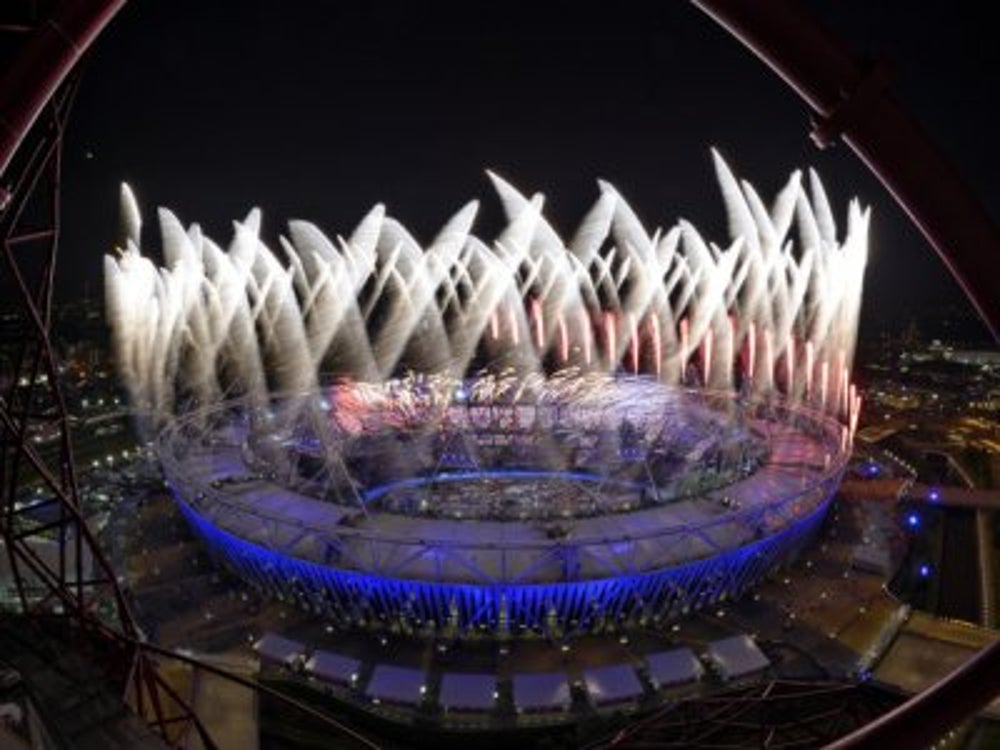 For the Summer Olympics, YouTube powered NBC's online video experience to let users watch any event live. You could also access the footage from essentially any device, be that your computer, mobile phone, or tablet. 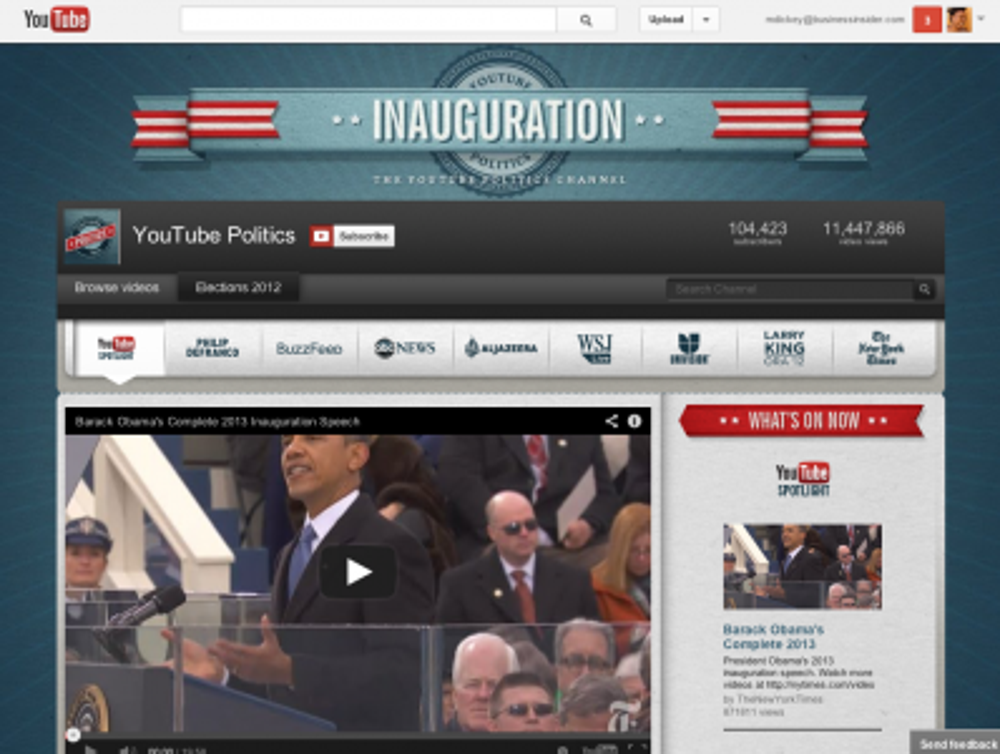 In a little over 5 months, Gangnam Style hit 1 billion views in December 2012 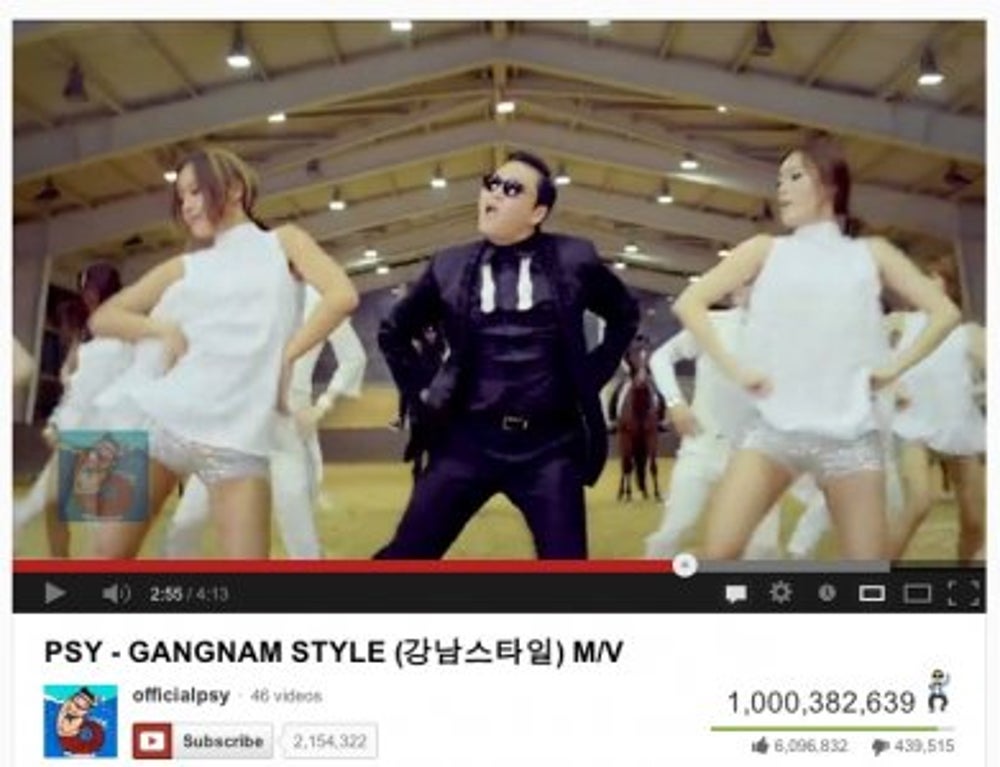 It's now the number one video on YouTube with more than 1.3 billion views.

2012 in general was also huge for YouTube, with people watching more than 4 billion hours worth of video every month.