Street Business School, in Uganda: Entrepreneurship Is the Path out of Poverty

Devin Hibbard
Co-Founder and CEO, BeadforLife and the Street Business School
August 14, 2016 9 min read
Opinions expressed by Entrepreneur contributors are their own.

Can a business school help one million women in the developing world lift themselves out of poverty? The Street Business School, a tested and effective entrepreneurial training program in East Africa, plans to do just that.

Eleven years ago, three American women with no business training started BeadforLife, a fair trade organization in Uganda that paid women living in poverty to make colorful earrings, necklaces and bracelets out of recycled paper. On the surface, that sounds just like many other social-venture creation stories. What makes BeadforLife's story unique is that these founders knew from the beginning that they didn't want these jewelry-makers to become dependent on them or the organization for their future economic well-being.

What if paper beads stopped being fashionable and marketable? What if the organization had to leave Uganda for some reason? What if the skills these women were gaining were insufficient to allow them to be remain financially independent?

Entrepreneurship is the path out of poverty.

Entrepreneurship was the answer. As soon as a woman enrolled in the bead-making program, she started getting trained to create a business that would be sustainable in the local economy. The program was called Beads to Business -- something the founders thought of as "transformational trade."

Of course, the business training had to be customized, to be relevant to these impoverished women, who typically have little formal education. Customer service and basic bookkeeping -- even the distinction between profit and loss -- were totally new concepts for many of these women. And gaining even basic skills in these areas opened up whole new worlds of possibility.

The organization learned right alongside the participants. By constantly experimenting with the curriculum, testing the results and making necessary changes, organizers refined the program and made it more effective. In the last ten years, BeadforLife has injected substantial revenue into Ugandan communities by buying and selling beads, and has trained an estimated 45,500 women to start 3,250 businesses ranging from vegetable stalls to hair salons to restaurants.

Follow-up studies show that 81 percent of these businesses have remained open after two years, compared to an 80 percent failure rate for businesses in Uganda as a whole.

That's great news, of course, But Beads to Business' ability to scale was limited: The number of women who could be enrolled in its education program was limited by the volume of beads the organization could sell.

After struggling with this challenge, the school's organizers realized that beads were merely a means to an end -- the physical manifestation of the work of empowering women and fighting against poverty. The school had gotten good at business training, and there was no reason that that education had to be tied to beads alone.

This led to the birth of the Street Business School -- a mobile business school that delivers its powerful entrepreneurship curriculum to women who have never rolled a single bead for the organization. The courses are delivered right in the communities where the women live, and take place over a period of six months. In addition to classroom sessions, the new entrepreneurs get one-on-one coaching from BeadforLife's trainers, who visit their businesses several times to make sure the lessons are being applied.

As happened with Beadsfor Life and Beads to Business, success followed yet again, with the founding of Street Business School. But, still dissatisfied with the number of women being served, organizers determined to start a global expansion of the School.

For 2018, the plan is to expand, to train organizations on other continents. If all goes well, by 2027, one million women will have been trained by this network of partner organizations.

While BeadforLife continues to sell its jewelry to help fund the Street Business School and its other programs, organizers say they see no limit to the number of women who can change their lives and lift themselves out of poverty through entrepreneurship. In the photo, Scovia Nantale serves a customer a Ugandan dish called katogo, in her street-side restaurant. Having advanced from a roadside pot of stew to the small room she purchased for her hospitality business, Nantale is now a proud restaurant owner. Through Street Business School, this former stay-at-home mom became the breadwinner for her family. She started small -- by purchasing a cow's head and a lump of charcoal, which she used that first day to cook a traditional Uganda stew and sell nine plates of food. And things took off from there: Eventually, Nantale earned enough to buy a room to house her restaurant. That restaurant is now a staple in her community, and she hopes to obtain electricity soon, so she can offer her customers a particular treat: "cold Coca-Cola from the fridge." 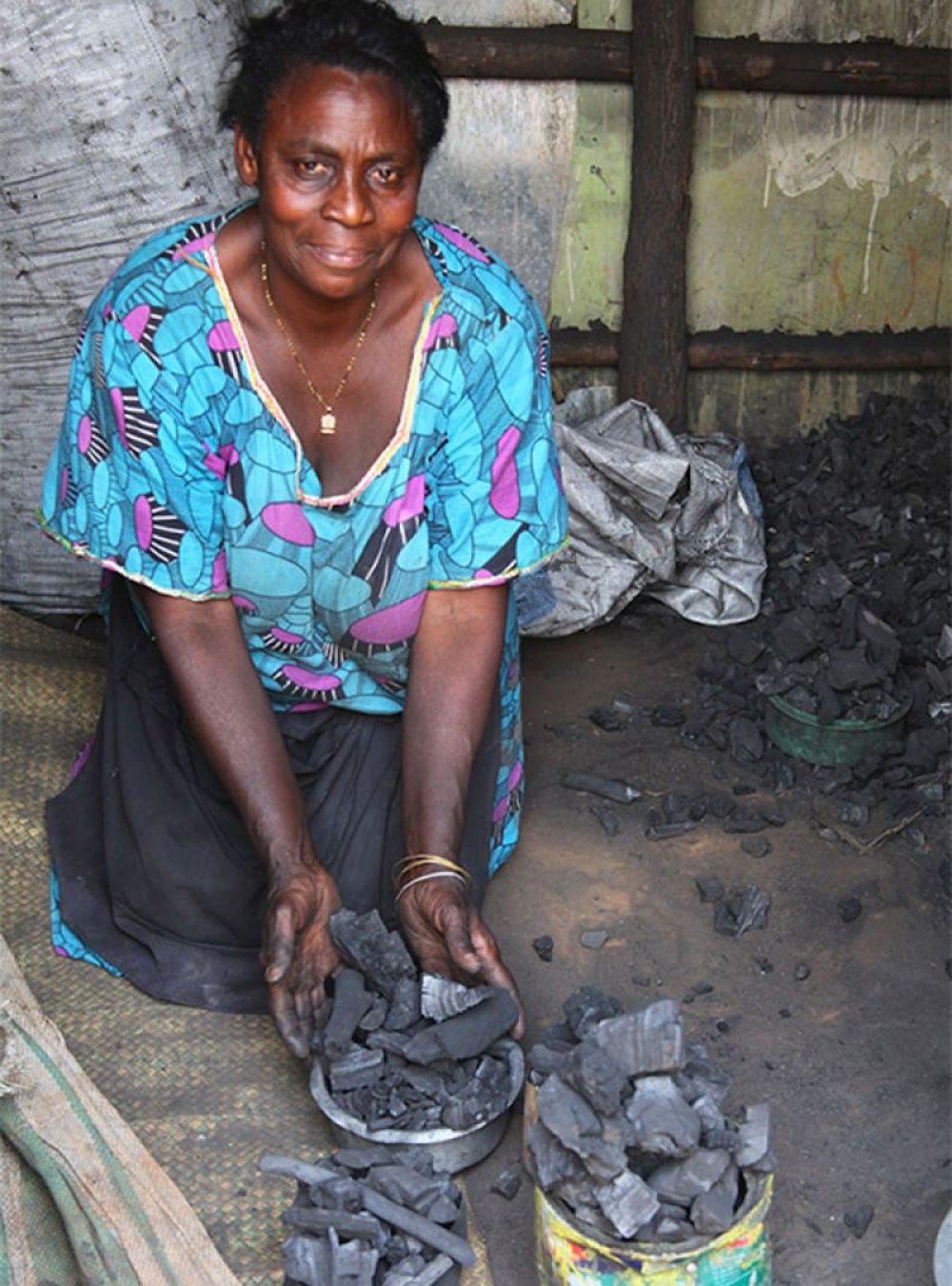 Since graduating from Street Business School, Rose Nakalema has built up her charcoal business to where it's now thriving. That's a long way from where she used to be: selling vegetables, which brought her a mere dollar a day. Taking care of her grandchildren, who stay with her, was a struggle, for both her financial and emotional well-being, Nakalema acknowledges. "I used to be a back-door person that no one noticed," she says. "But now I am a front-door person, and everyone sees me!" To get to that point, Nakalema did some research and identified a strong demand in her neighborhood for charcoal; she then started off selling just one bag of the fuel a day. Today, however, she stocks and sells seven bags each day, producing enough income to comfortably support her family. 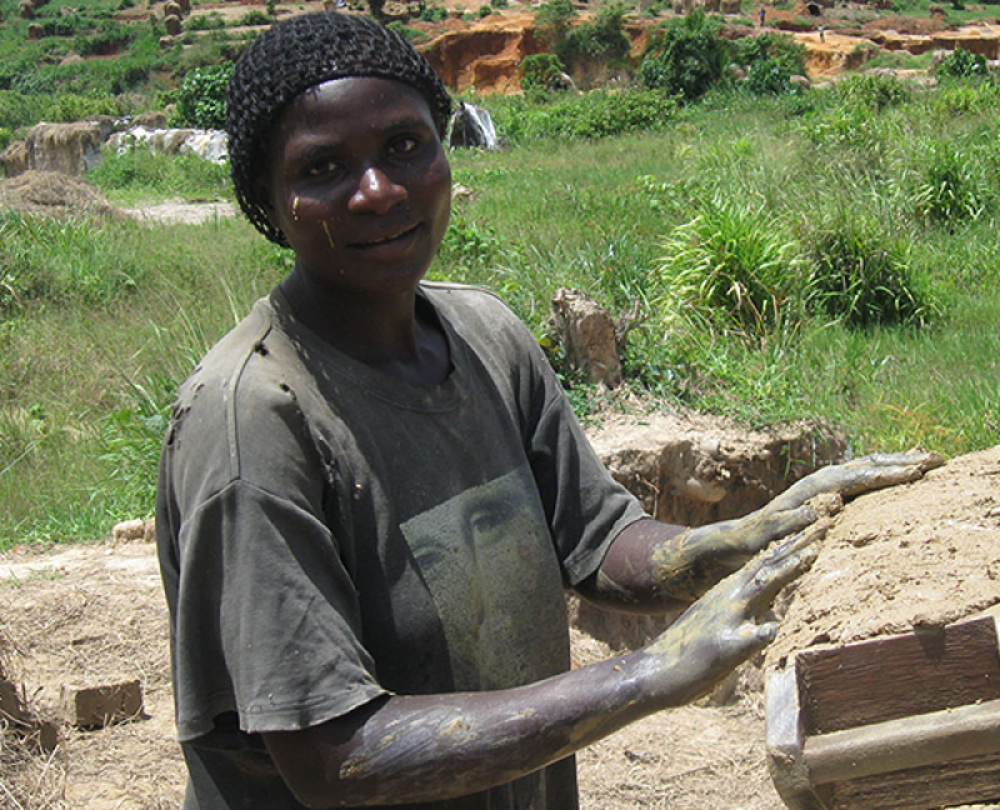 Josephina, proud woman bricklayer
Image credit: Street Business School
The only woman in a male-dominated field, Josephine Nassiwa earns her living as a brick-maker. That's a sharp contrast to her former life, when she used to sit at home with no work or income. Then Nassiwa attended a Street Business School session called "Getting Out of Your Comfort Zone." So she went to a patch of land near her home and made her first batch of bricks, thereby increasing her income to over $200 a month. Despite the heavy labor involved, Wassiwa says, "I am proud of myself. I work hard, I am happy, and I am proud to take my money to the bank. Street Business School helped get me out of my comfort zone."
Related: Africa: A New Business Frontier 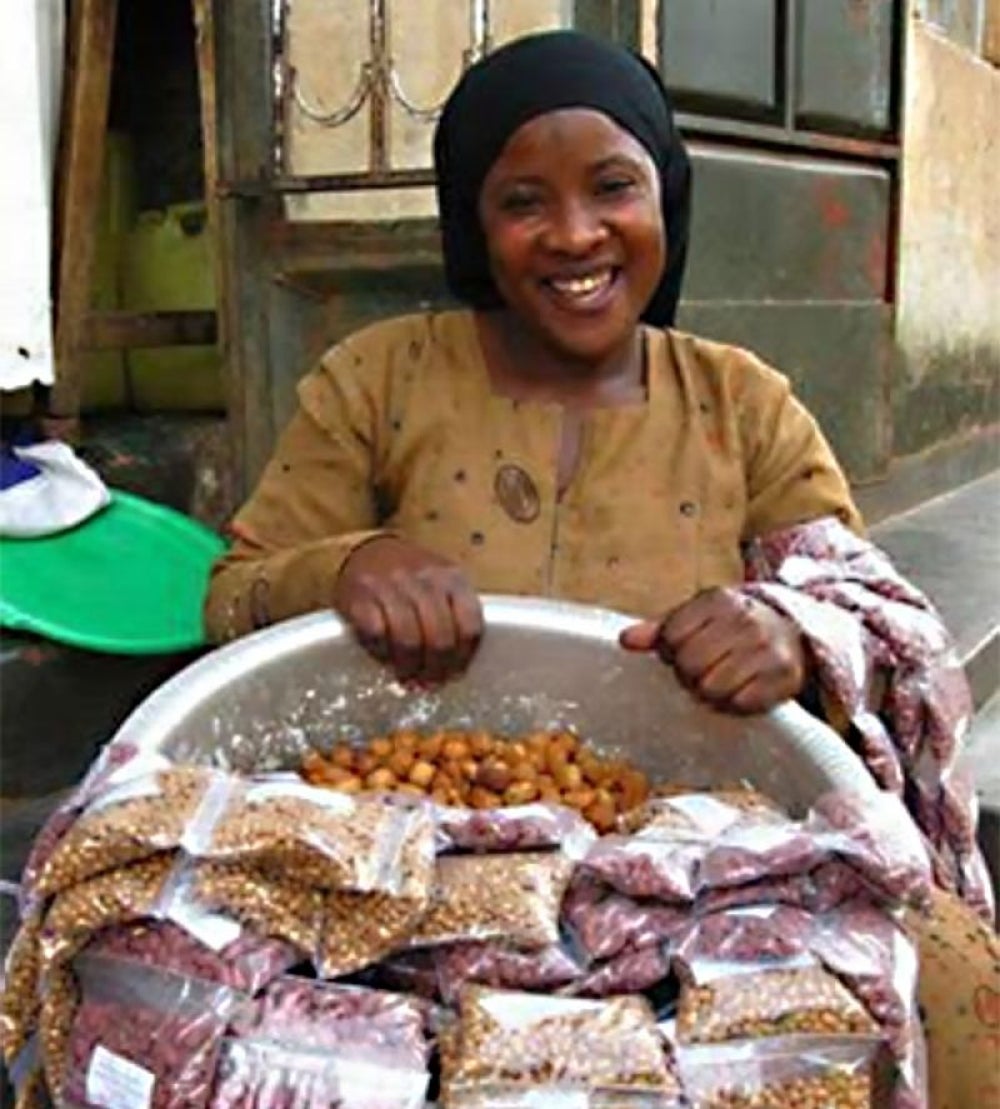 Image credit: Street Business School
Before joining BeadforLife, Amina Nalwoga couldn't afford to send her oldest son to school or feed her children three meals a day. For money, she would wash her neighbors' clothes. When she found work, she earned a mere 90 cents to $1.30 a day. On days when she earned nothing, the family went hungry. Once Nalwoga enrolled in Beads to Business, however, she received a $10 loan and was assigned to smart a small business over a weekend. She used the money to purchase supplies and cook some food snacks common to Uganda, then sold them by walking through her neighborhood. And so was born Amina's Snack Shop, a business that today allows her to not only provide for her children but put a little into savings each week.

Katiba Apendiki: From Refugee to Businesswoman 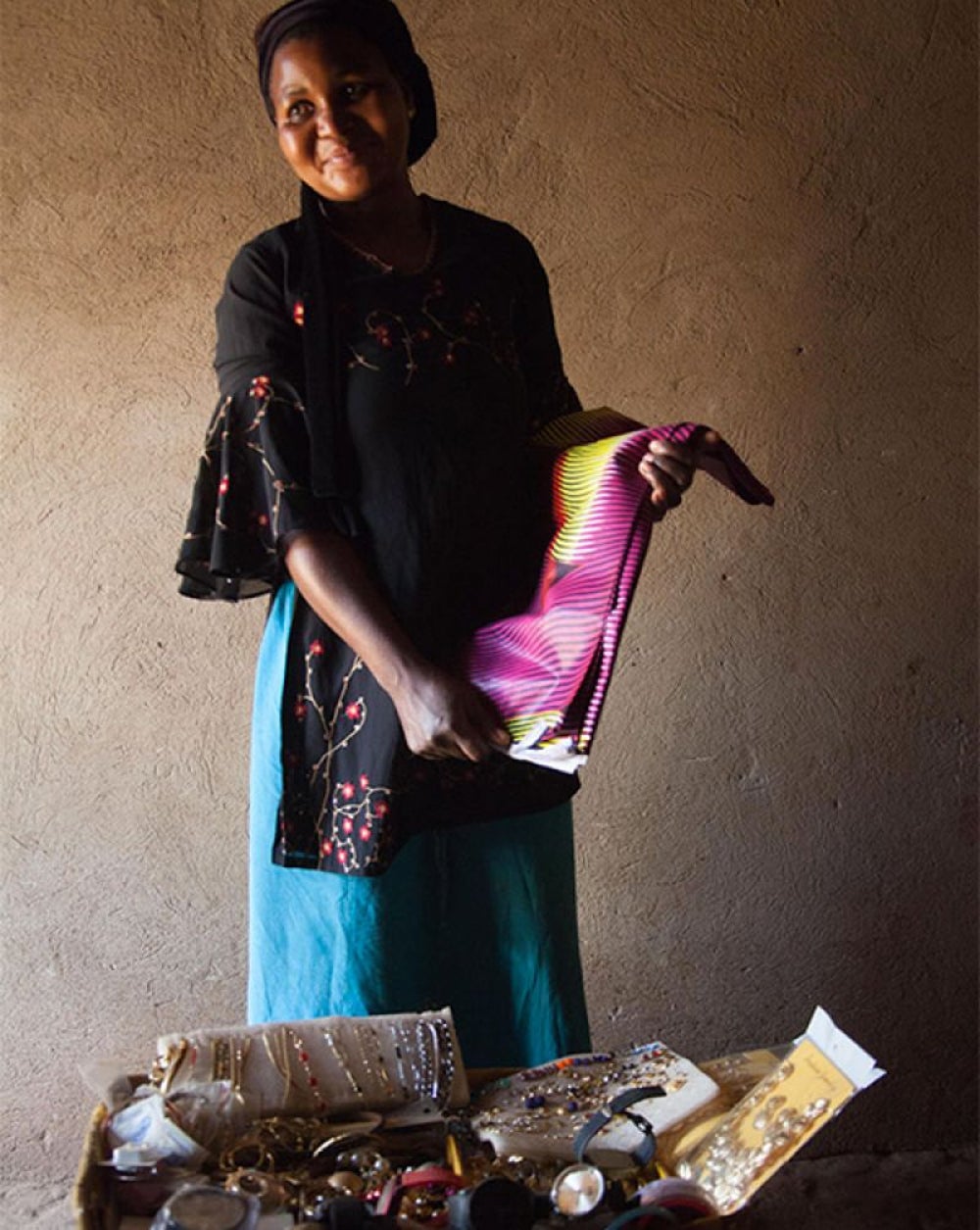 When conflict broke out in her hometown in the Democratic Republic of Congo, Katiba Apendiki was forced to flee. She headed to Uganda with little but the clothes on her back, leaving her family destitute. Settling in Kampala, she heard about the Street Business School and found her lessons there in business fundamentals to be a powerful inspiration. "At Street Business School, I've learned about profits and what something costs. Now I know the lowest price I can sell it for," Apendiki says. "I know how to save and move towards my dreams." Today, she runs a successful jewelry and fabric import business, which she says has transformed her life. 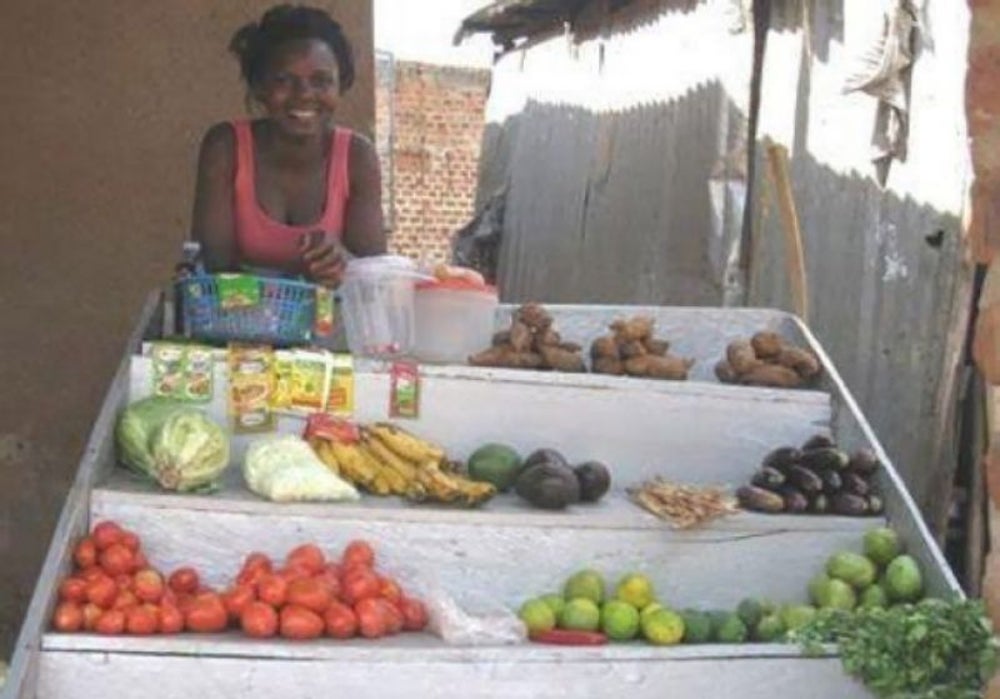 Image credit: Street Business School
Shallot Namuhawe recently graduated from the Street Business School as the owner of a successful vegetable stand. Her determination to succeed and support her family was powerful, and in turn was powered by trainings like "Starting Small and Finding Capital." The lessons learned prompted Namuhawe to look around her house for items she no longer used; and, sure enough, she found her wedding dress. She sold the dress for $36 and used the money to rent a small space and purchase vegetables. But the location was poor; business was slow. Listening to yet another lesson, this time about market research, Namuhawe realized she needed to move. Meanwhile, crisis struck: Her family was robbed of all its posssessions. Undeterred, Namuhawe found a new location; and this time things took off: In six months, she went from zero income to running a vegetable business now generating over $100 a month in profit. 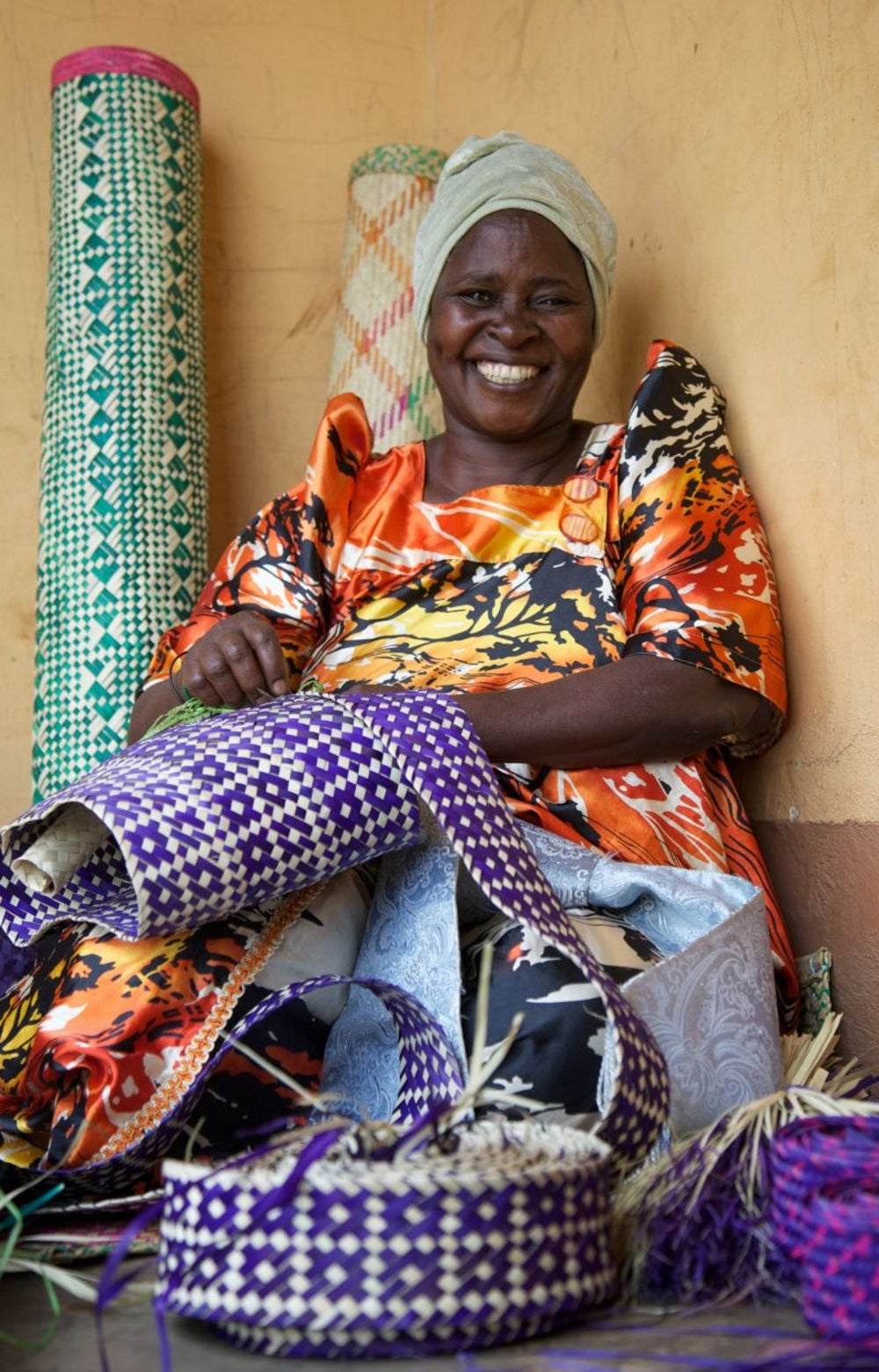 Image credit: Street Business School
Hadijah Namusis once survived on less than a dollar a day. Born into a family with 20 siblings, she worked the fields as a child and was married off at a young age. She cleaned houses, did field work and washed clothes. Then she enrolled in Street Business School. Learning the importance of investing in her own future, Namusis sold all of her unused possessions and spent the $88 she raised to purchase palm leaves and dye. Today, she sells her beautiful bags for $8 apiece and is setting the money aside to buy a poultry farm in the near future. 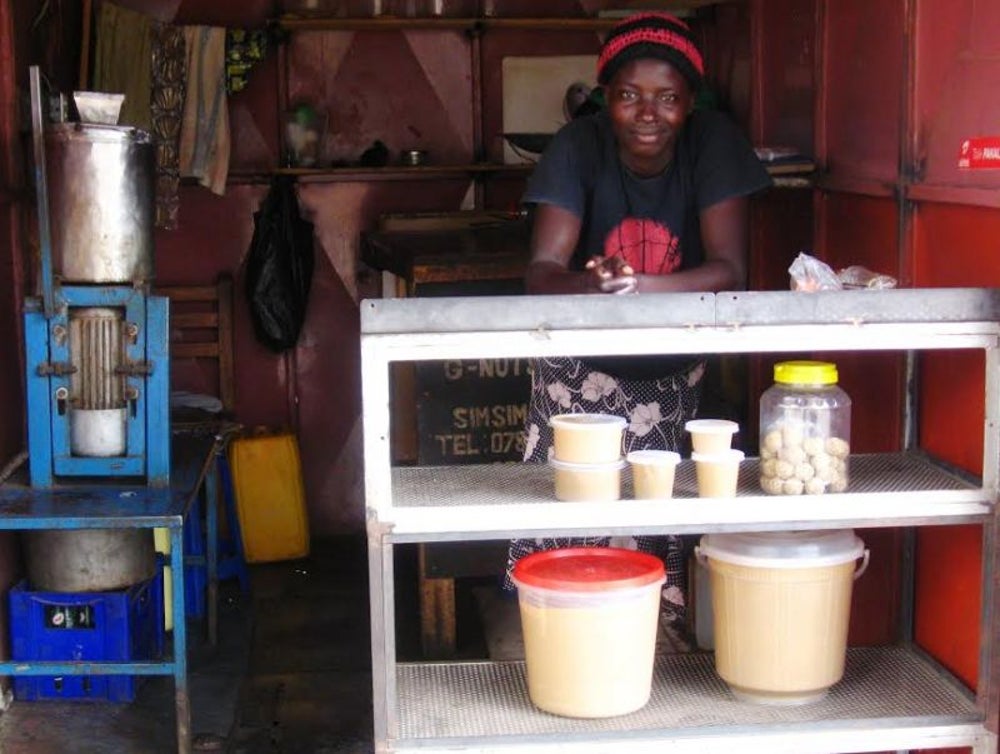 Image credit: Street Business School
Judith Among was already an entrepreneur when she enrolled in Street Business School: With the support of her husband, she had started a peanut butter business; she even owned her own shop. But she was faced with stiff competition and few customers. That all changed in July of 2015 when, during a course titled "Growing Your Customer Base," Among learned ways to bring in more customers -- and profit. In her roomy shop, she began offering other products and charging customers to use the grinding machine she used for her peanut butter. Through tactics like those, Among was able to nearly double her weekly income. "I gained confidence and boldness to run my business successfully," she now says with pride.
More from Entrepreneur