Who is turning to entrepreneurship and where they are launching their businesses may surprise you.
Next Article

When you hear the words startup founder, it’s likely that the image that comes to mind is that of a young, white man who lives in California or New York, favors casual wear and didn't finish college. New data from the Kauffman Foundation may have you thinking differently.

Every year, Kauffman releases a wide ranging body of research about the state of startup activity in the United States. The study looks at trends across cities and states and explores who -- by age, gender, race and even veteran status -- chooses to be an entrepreneur.

Read on for 10 facts about what entrepreneurship looks like now.

Startup activity is on the rise but the rate has declined. 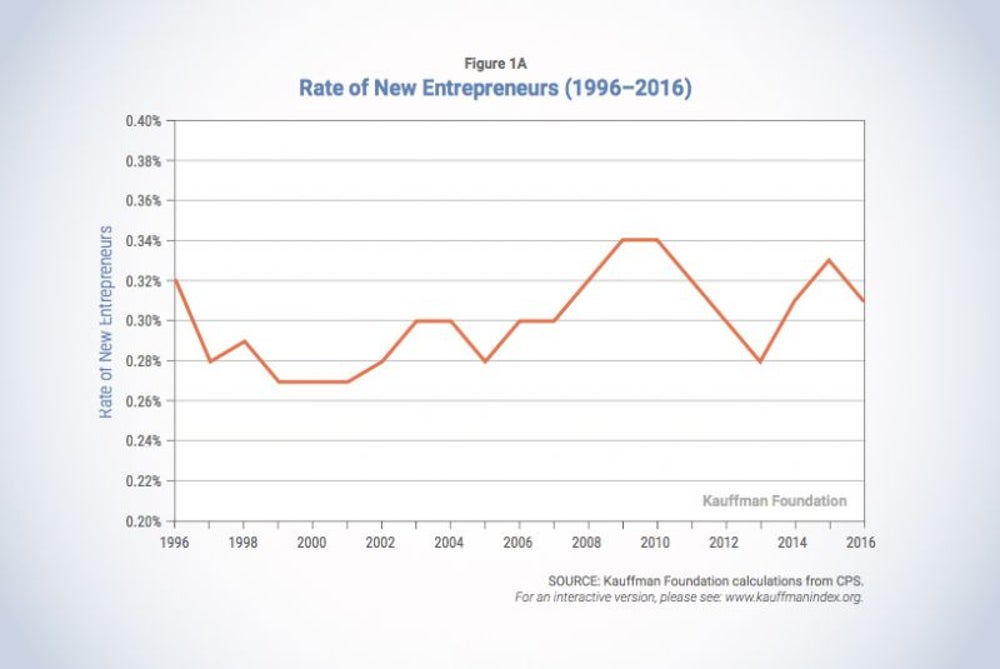 People are choosing entrepreneurship for opportunity, not necessity. 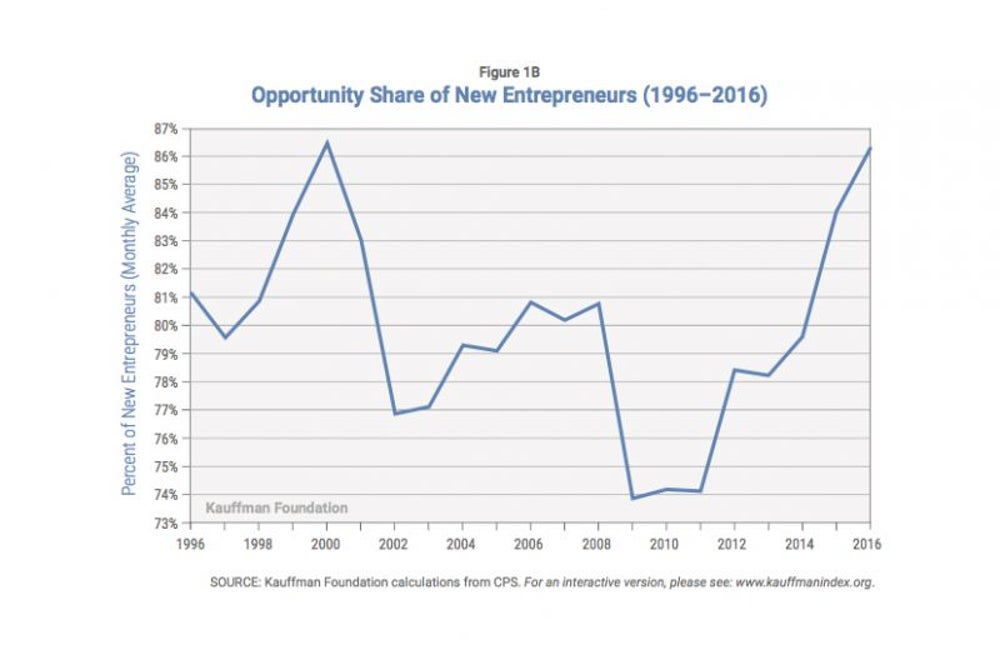 There are more boomer entrepreneurs than millennials. 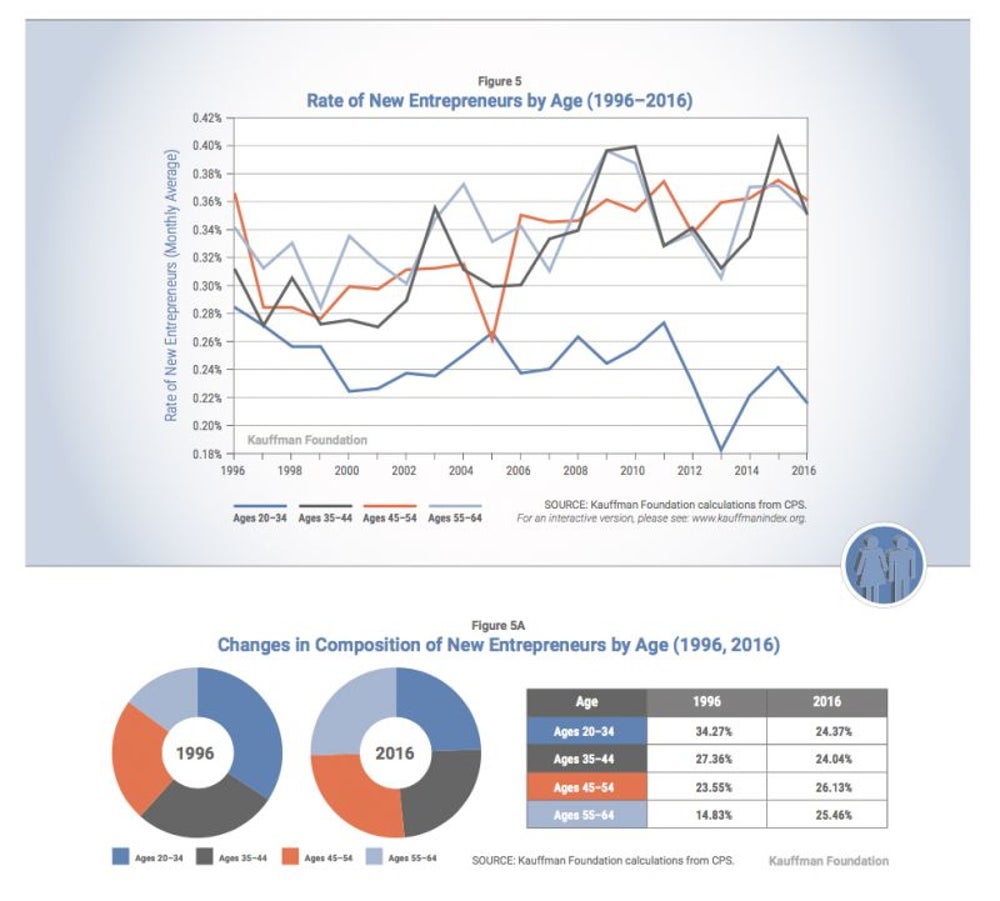 They are college graduates, not dropouts. 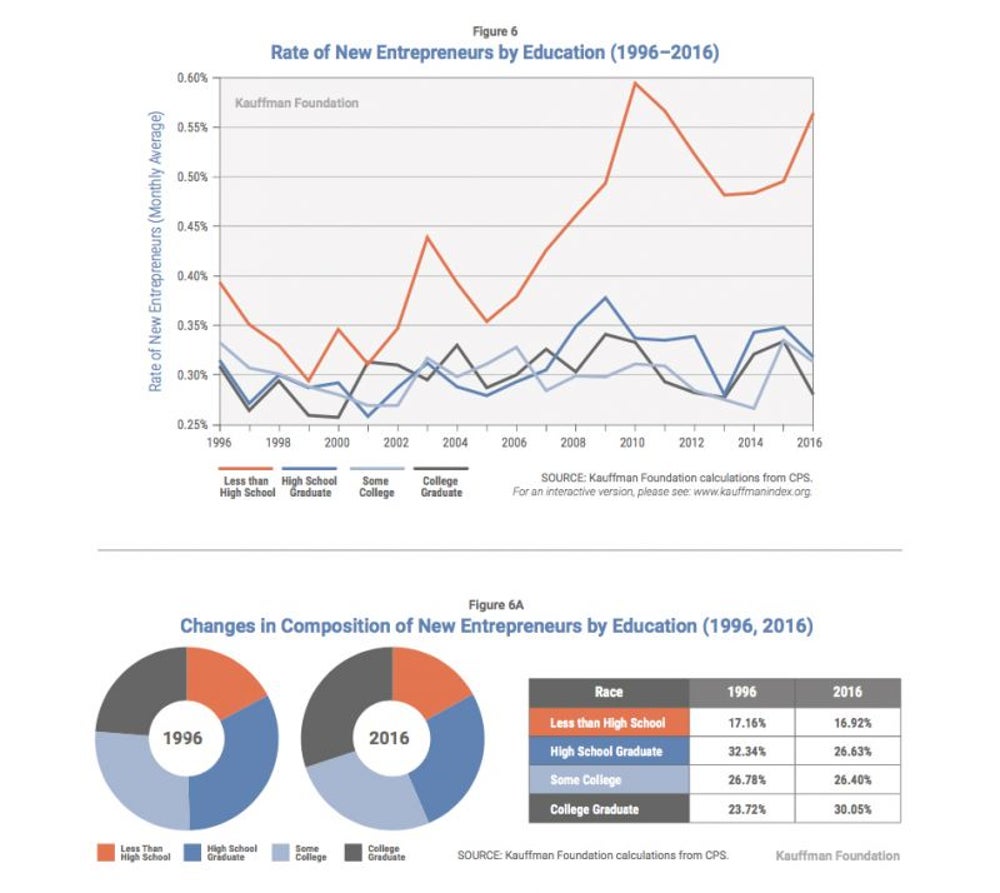 While some might subscribe to the Bill Gates, Mark Zuckerberg and Evan Spiegel school of leaving your institution of higher education to start a business, according to the Kauffman Foundation, the percentage of entrepreneurs with college degrees grew since 1996 from 23.7 percent to 30.1 percent, making business owners with college degrees the biggest educational category of new entrepreneurs in the country.

Female entrepreneurs have made gains, but there is still a long way to go. 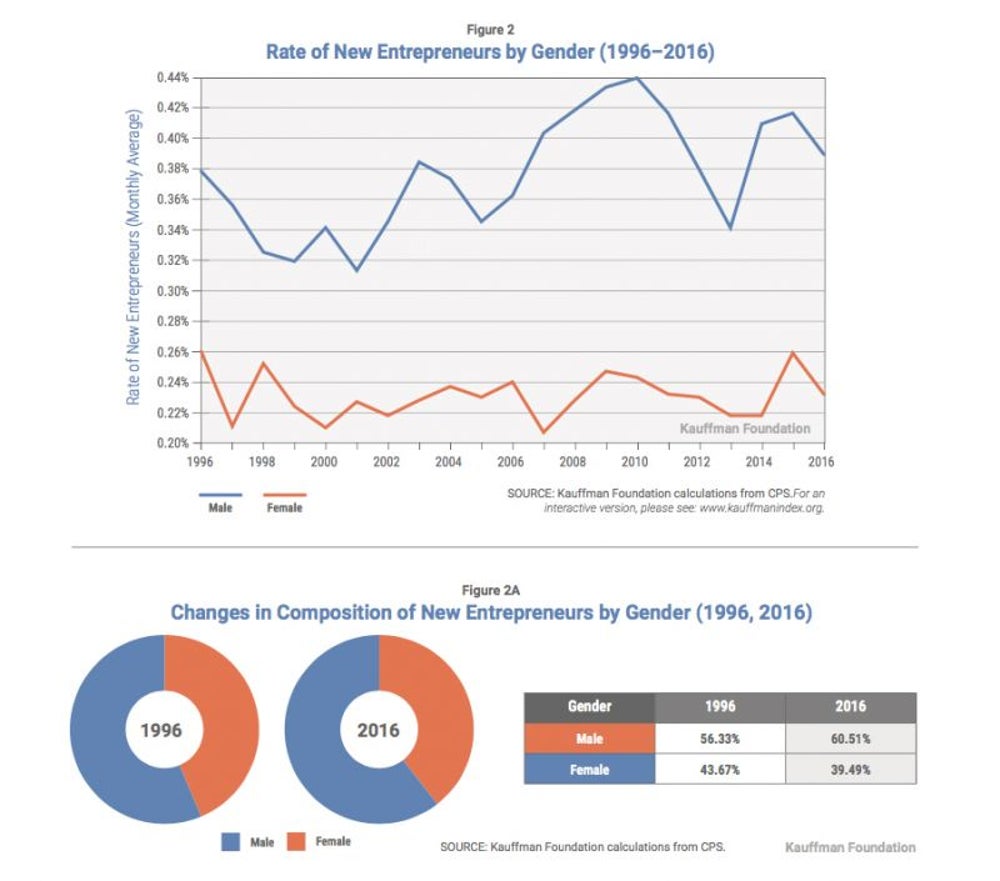 Entrepreneurs are less likely to be white. 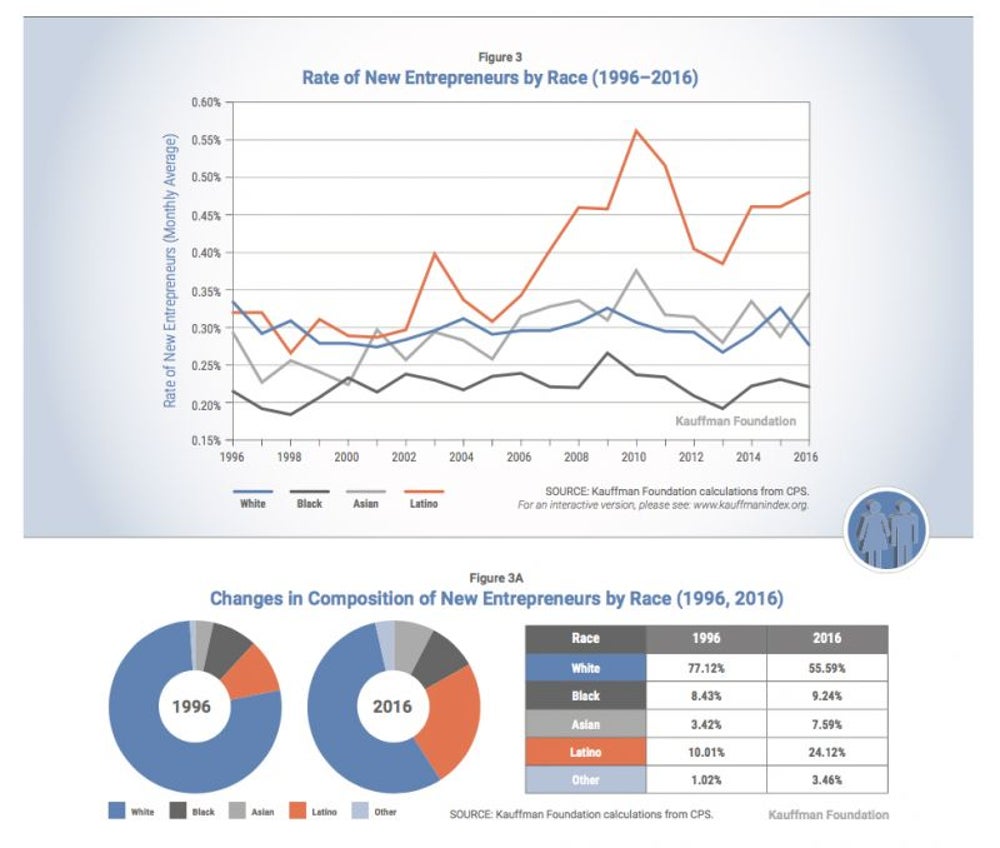 Of course, the majority of startup founders are white and have been for the last two decades, but incrementally, black, Asian and Latino entrepreneurs have made gains since 1996.

Entrepreneurs in America are more likely to be foreign born. 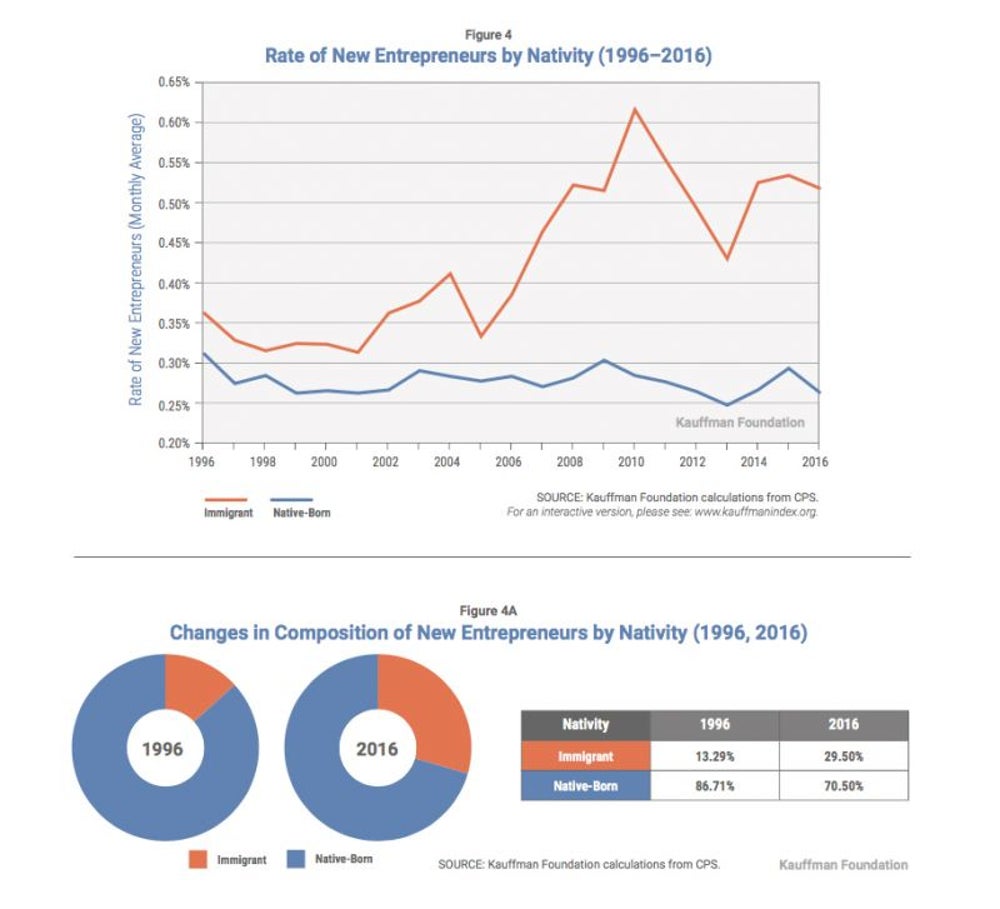 Entrepreneurs are less likely to be veterans. 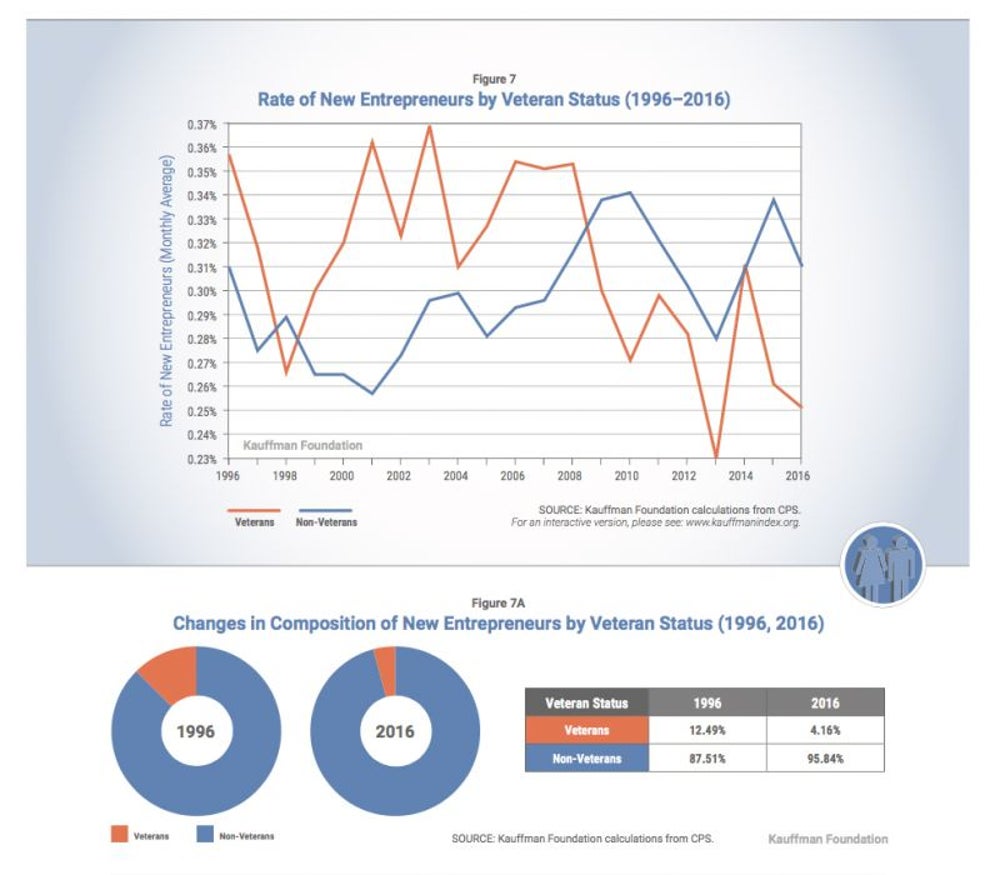 In 1996, 12.49 percent of new entrepreneurs were veterans, but in 2016, that number had decreased to 4.16 percent. According to the Kauffman Foundation, that decline is due to the fact that over the past 20 years there has been a declining share of people with veteran status in the country’s working age population.

It seems like there is a startup frenzy, but that isn’t the case. 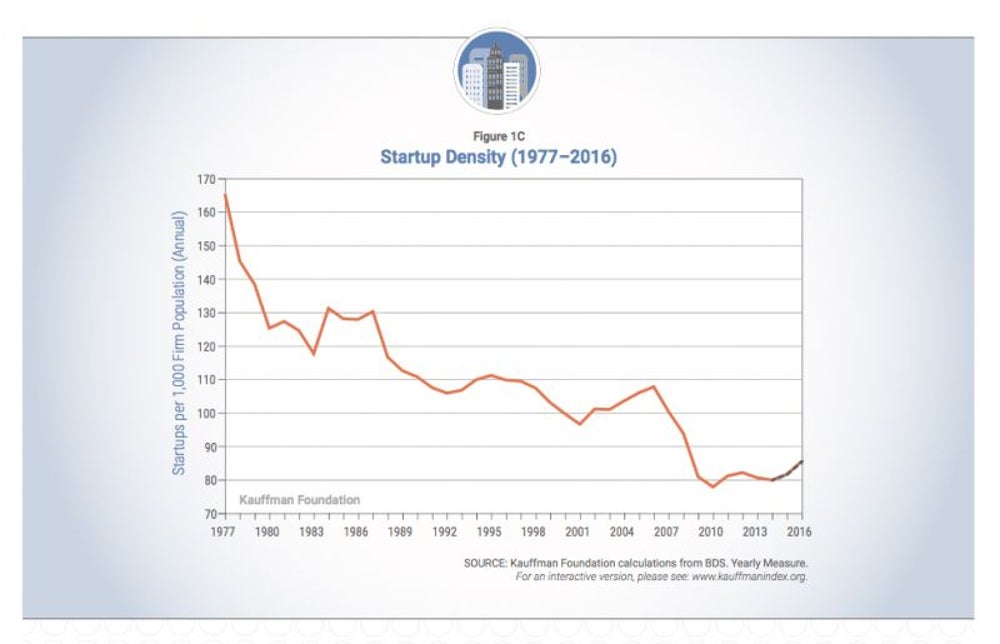 One of the metrics that the Kauffman Foundation uses to assess the state of entrepreneurship in the country is something called startup density. Kauffman defines it as “the number of startups per 1,000 employer businesses.” From 2015 to 2016, that figure went up from 81.6 startups per 1,000 employer businesses to 85.4. Even though there was an upward trend, overall, that figure is on the decline.

From 2006 to 2014, startup density in the top 40 of the biggest metropolitan areas decreased on average by more than 20 percent. And overall startup density today is about 20 percent lower than it was before the Great Recession and has been on a long-term decline since the late 1970s.

The places with the most startup activity may surprise you. 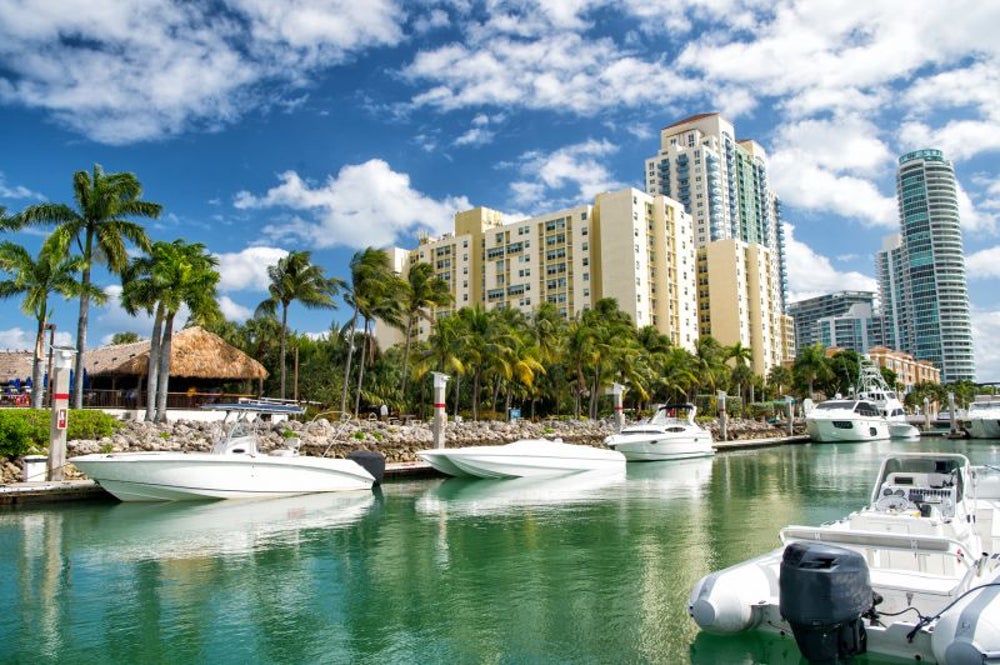 Of the 25 largest states, California was number one for startup activity, followed by Texas, Florida, Arizona and Colorado. For the 25 smallest states, Nevada, Oklahoma, Wyoming, Montana and Idaho were at the top of the heap.

The biggest cities for startup activity were surprising as well. The top five were Miami; Austin, Texas; Los Angeles; San Diego, Calif.; and Las Vegas. The cities that have seen the biggest jump from last year were St. Louis, Cleveland and San Antonio, Texas. So clearly, you don’t just have to go to San Francisco or New York City to find a community of thriving entrepreneurs.

Under the customers first philosophy, this leading Chilean omnichannel startup expands throughout Mexico