Do You Sound More Like Donald Trump, Gary Vaynerchuk or Elon Musk? This App Can Tell You For Sure.

You can't hear yourself -- but this app can. And it's not pretty.
Next Article

It’s difficult to really hear ourselves. The voice we hear when we speak doesn't always sound the same as what others hear. Which is why we are sometimes shocked to hear our voice in a recording -- and why it can even make us cringe.

But ignoring how you really sound means blocking out an important way people perceive you. A low-pitched voice can seem strong, competent and authoritative, for instance, while those with a high-pitched voice are often perceived as having less experience.  And since we’re likely to change how we speak depending on the situation and the audience, we’re being heard differently in different situations.

Related: Think You Sound Confident and in Control? Your Voice Says Otherwise.

Complicating matters is the fact we rarely get feedback on the way we talk. People will tell us they liked our message or our slides, but not if our voice conflicts with the thing we’re trying to say. And strengthening that connection is essential, says Rick Salmon, a tech founder who has worked as an executive coach. “Only when our words, voice and body are congruent are we powerful as speakers.”

Salmon’s new app Voiceable could fill in the gaps. This digital tool is a sort of personal trainer for your voice. While a typical person can only focus on two to three characteristics at a time, this app can analyze nine, and far more objectively.  The app gives users immediate feedback as to how audiences might respond to factors including tone, pace and volume utilizing a technology using audience response data and voice research.

Related: 10 Tips for a Powerful Voice

Says Rick Salmon, speakers can’t focus just on their words -- the way they say them is just as important. “Great communication requires congruency between words, music and dance. Most presenters know a lot about words, or rhetoric,” he says. “Most also understand the basics of dance, or body language. Few are really conscious of their music, or how their voice sounds, and the effect it can have on audiences.”

The app will also find your celebrity voice match -- comparing user voices to those of famous actors, speakers and thought leaders. Which makes sense. Knowing if you talk more like Sheryl Sandberg or Donald Trump could be a catalyst for all kinds of change.

Related: Sound Advice: How to Make Your Voice More Effective

The app is also a chance to study public speaking in a whole new way, says Salmon. I tried a demo of the app last month and found I matched more closely with Gary Vaynerchuk than Hillary Clinton.

According to Salmon, Vaynerchuk’s fast-talking style --  he can apparently speak up to 200 words a minute -- is something few speakers in the world could do. “He scores off the charts for passion and energy."

Related: Is Your Voice a Business Asset or a Liability?

Of course, no one has a perfect voice or speaking style, points out Salmon. More important, however, is to realize we have more potential in our voices than we tap into. “The goal is to learn how to unlock your ability to speak in a way that will encourage people to listen more deeply to whatever message you have inside you.”

“We all succeed despite our voices,” he adds.

I tried the app at this year’s Oslo Innovation Week and what I learned about the way I speak wasn’t always pretty. Click through the slides above to see what happened.

First, I spoke into the app. Easy enough. 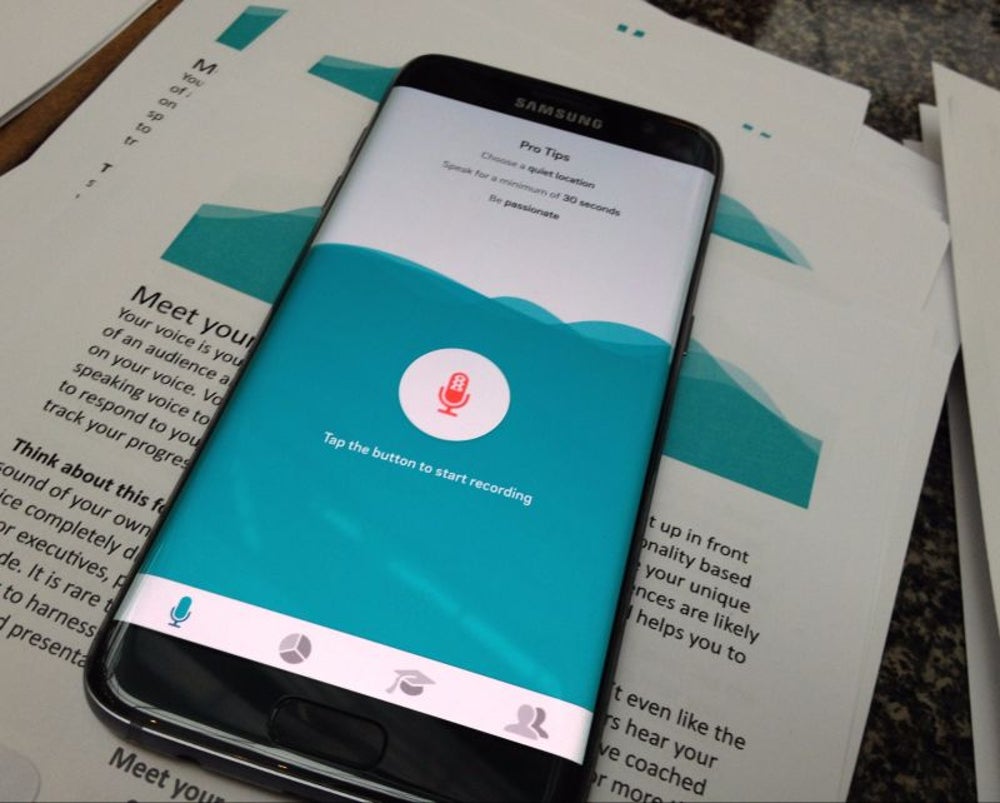 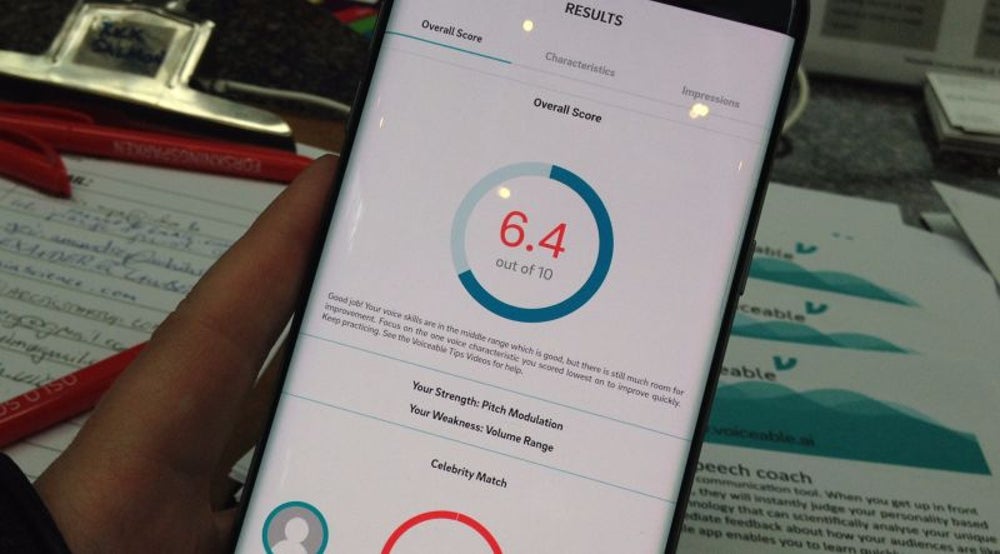 But I did match with the lady from 'The English Patient', so there’s that. 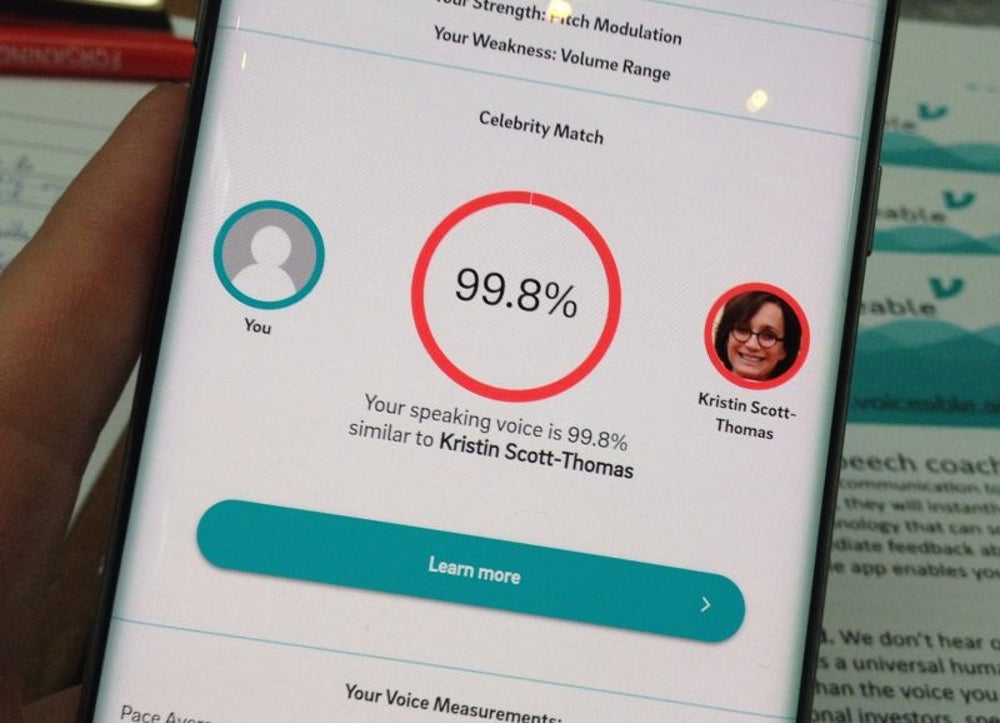 My voice's tone, combined with a quick pace, could make people tone out. (Sorry about that.) 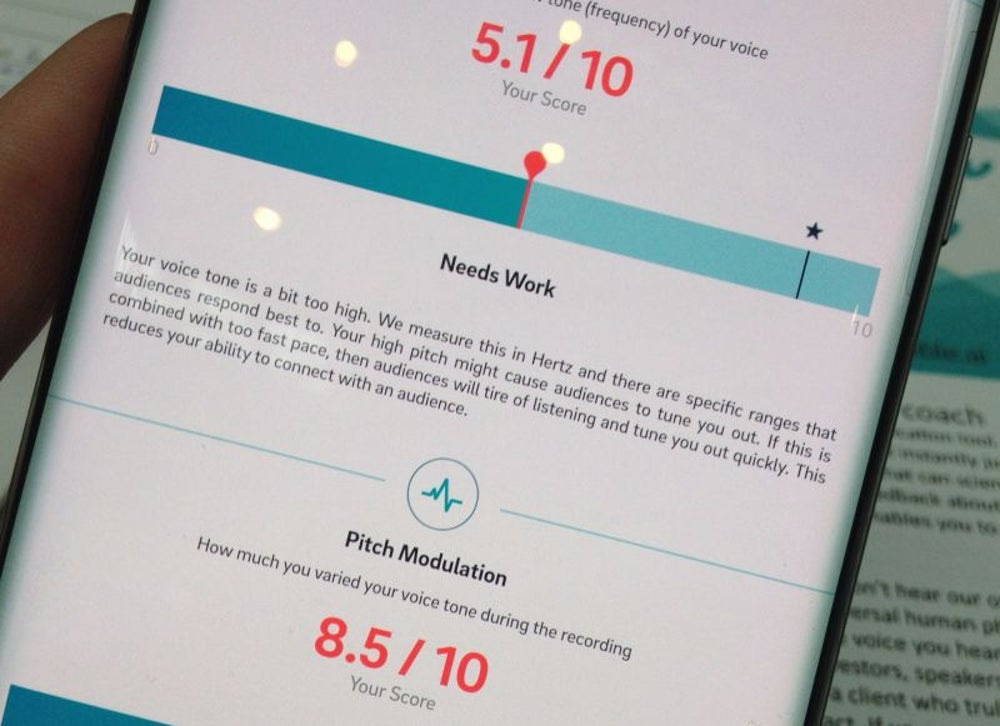 I spoke far too quickly, which isn’t awesome. 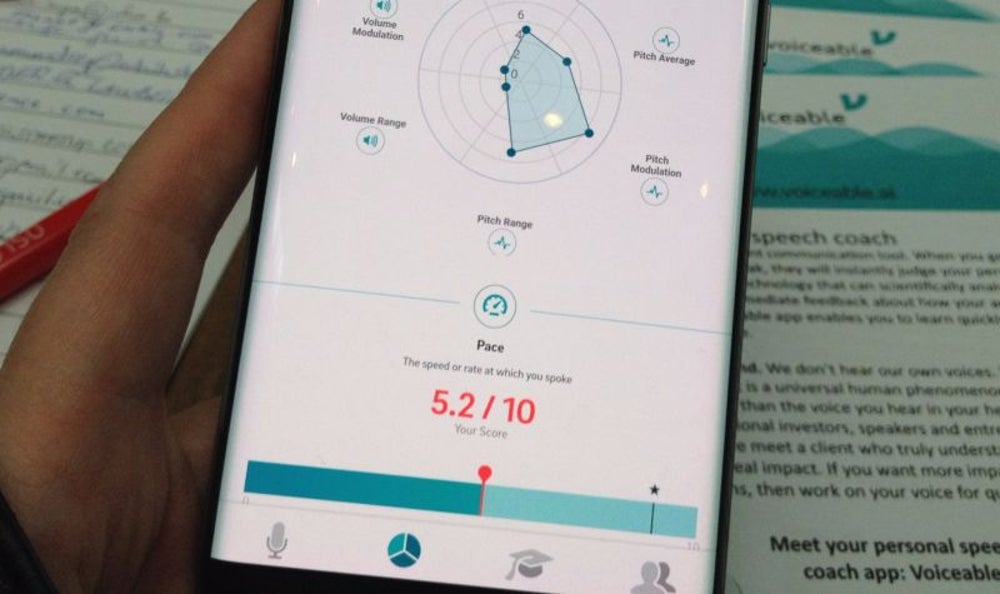 And I sound either really stressed or really excited. 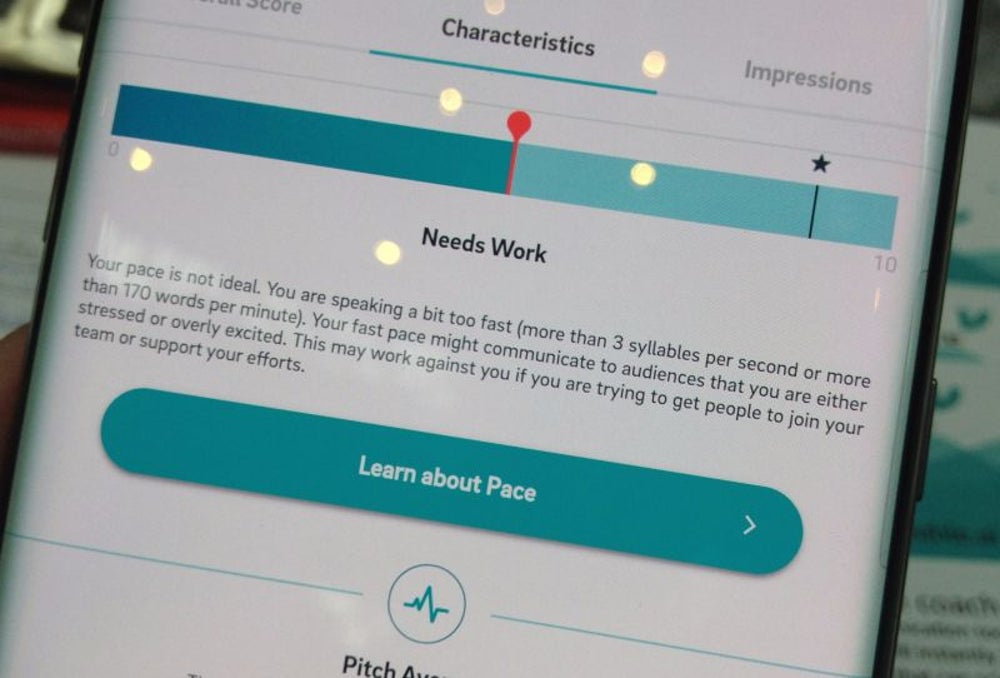 But there’s some hope. I’ve got enthusiasm. (And that’s got to count for something, right?) 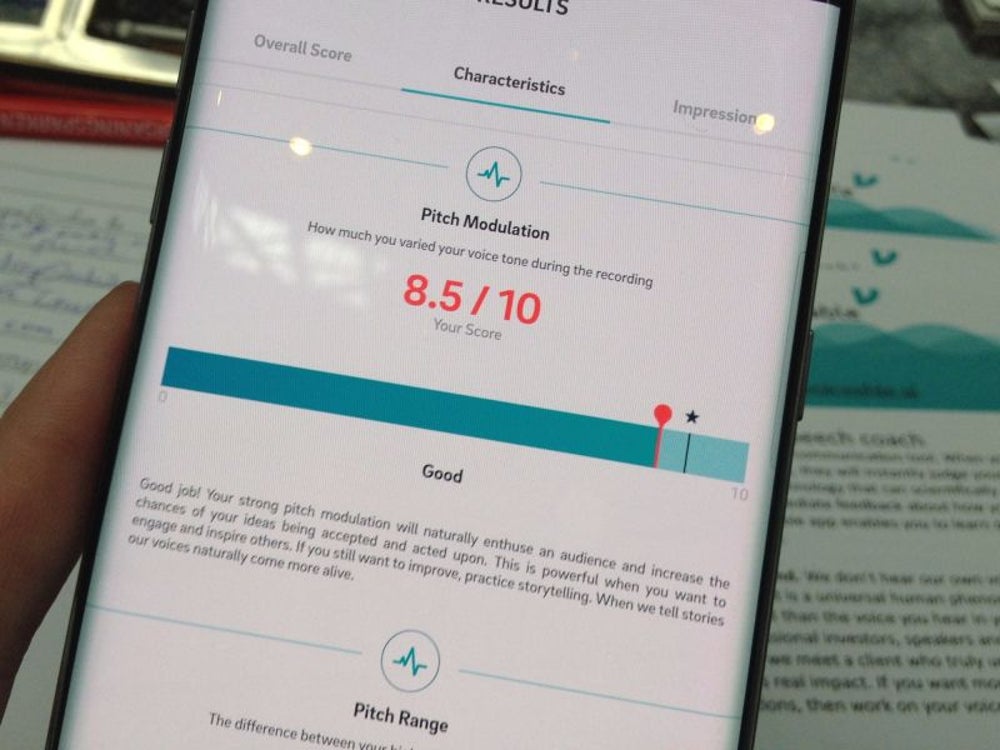 And I don’t exactly sound like a robot. (Close, but not exactly.) 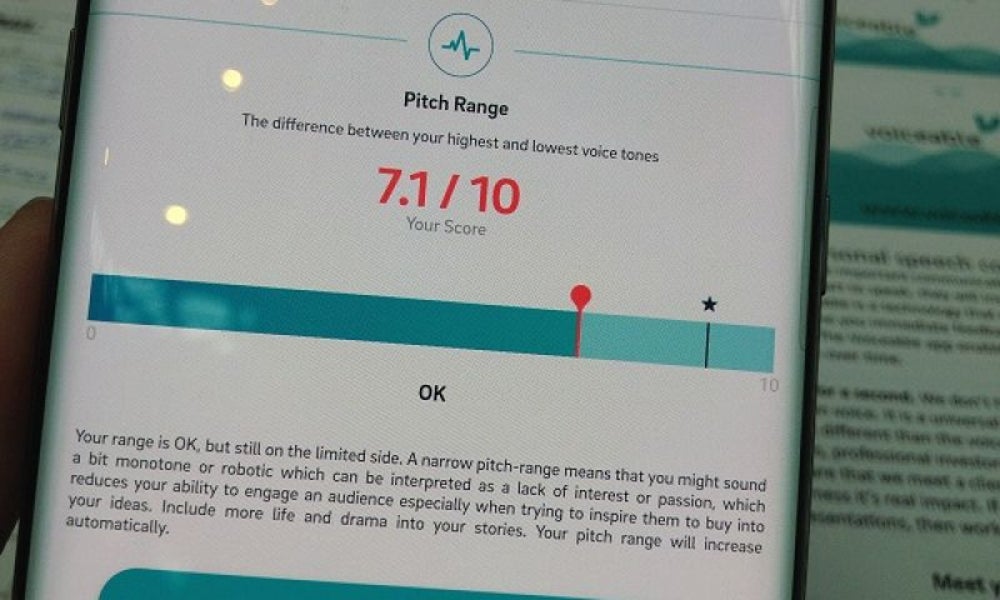 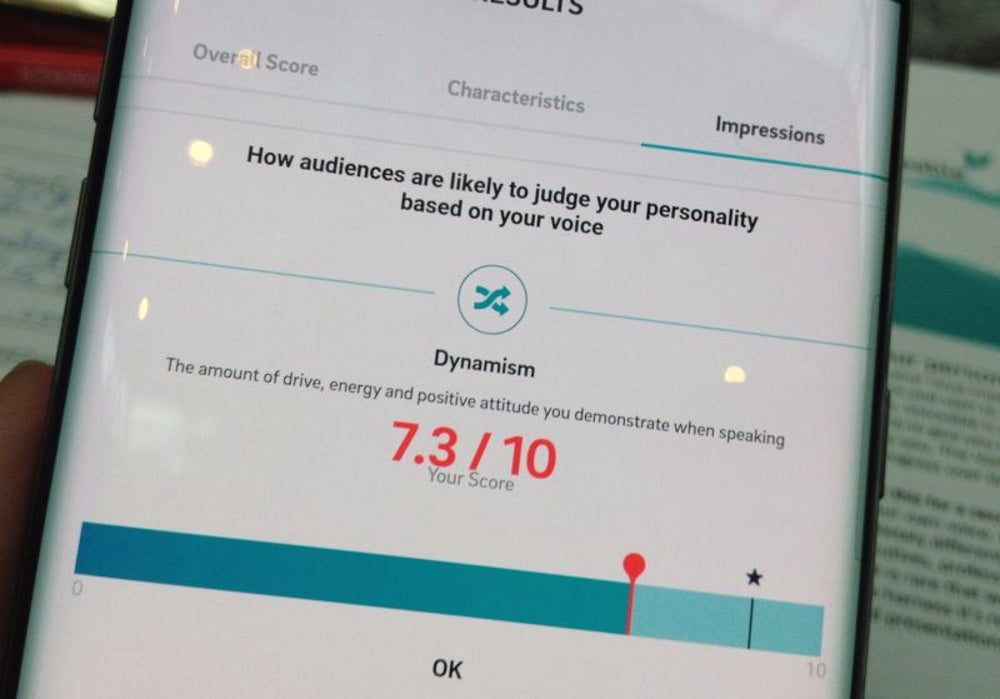 Sadly, my voice itself is not particularly pleasant. Which I’m likely the last to know. 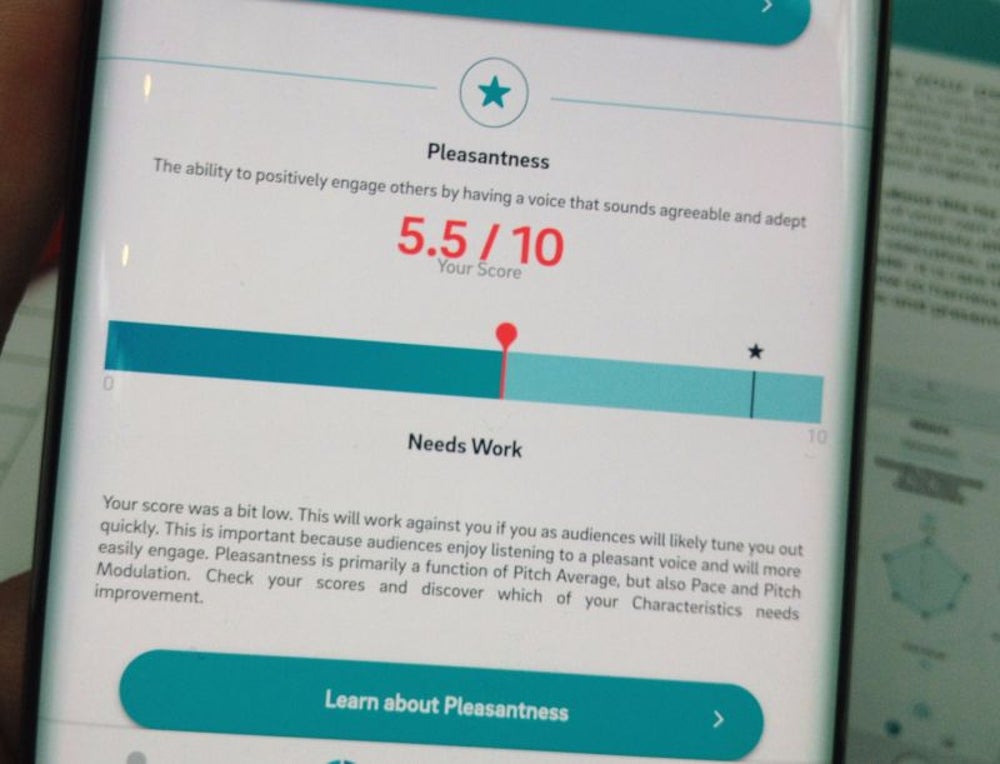 And there’s a chance I’m a low talker. 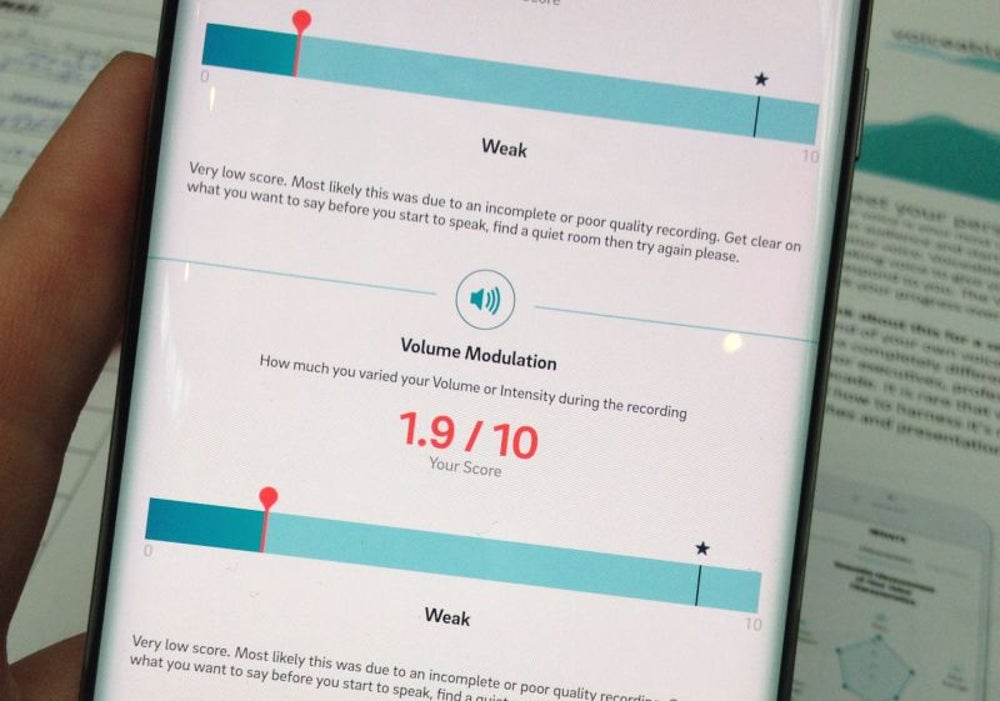 But I talk more like the charismatic Gary Vaynerchuk. 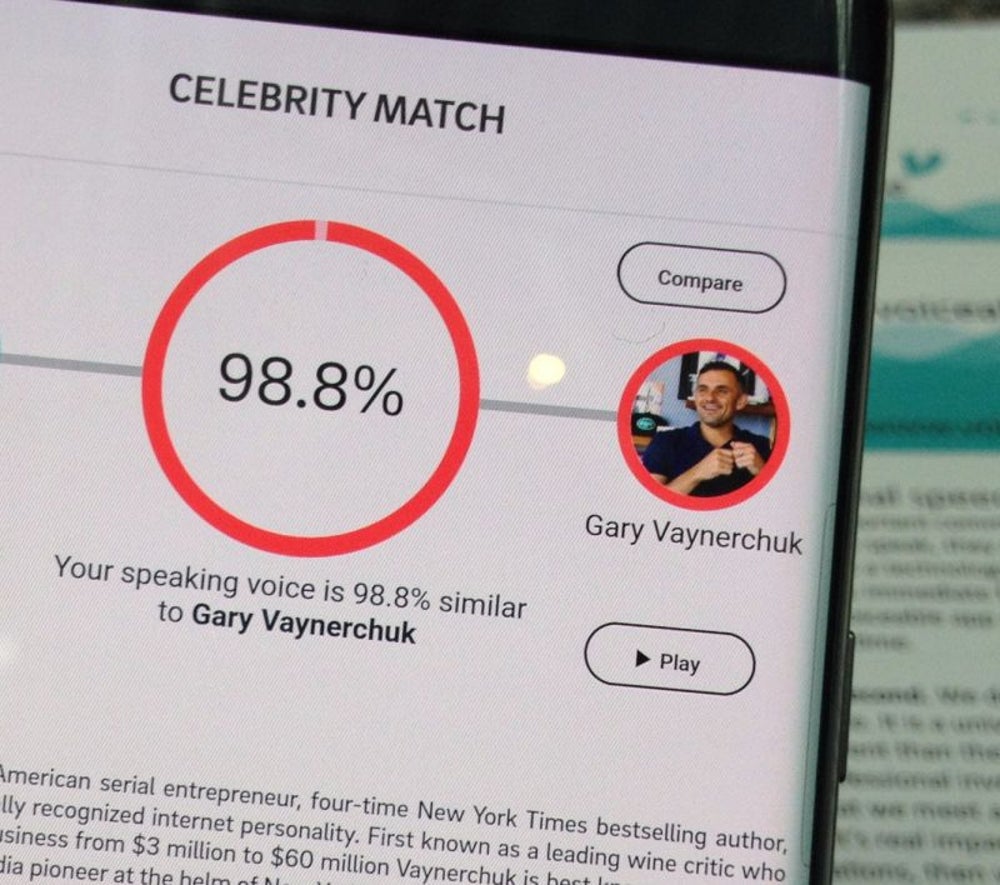 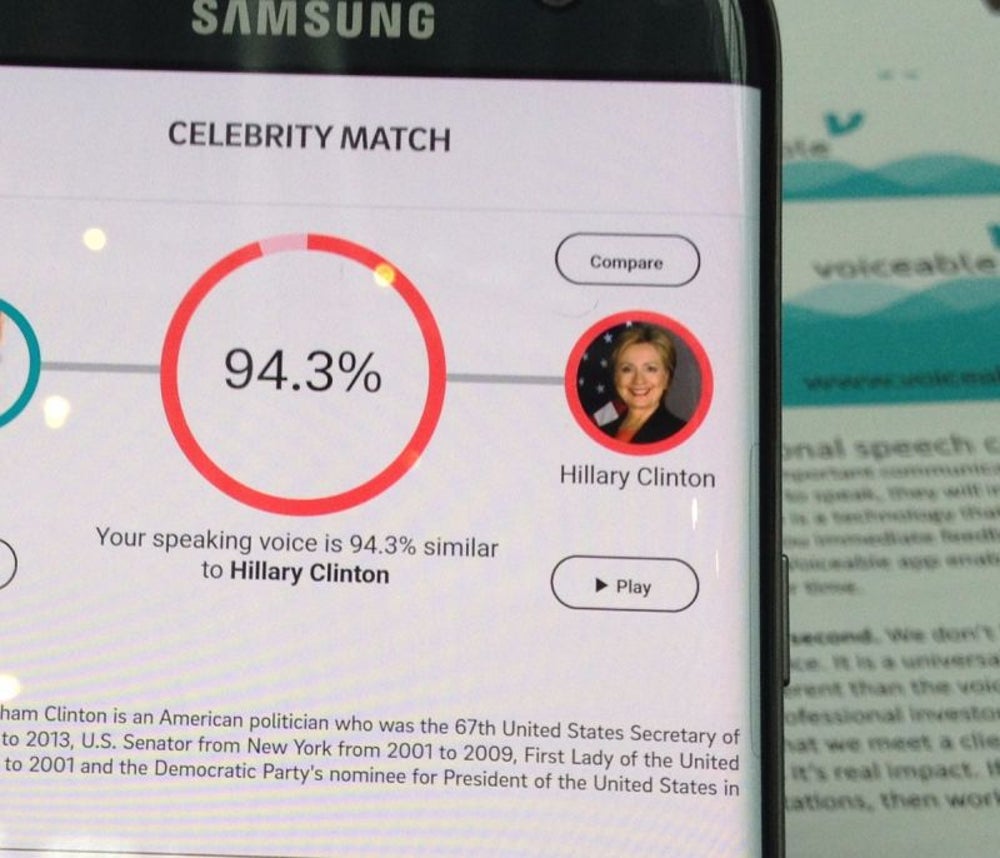 (The app’s founder notes that I tested a beta product and a bug in that version created values that were too closely spread. This won’t happen in the product that’s released.) 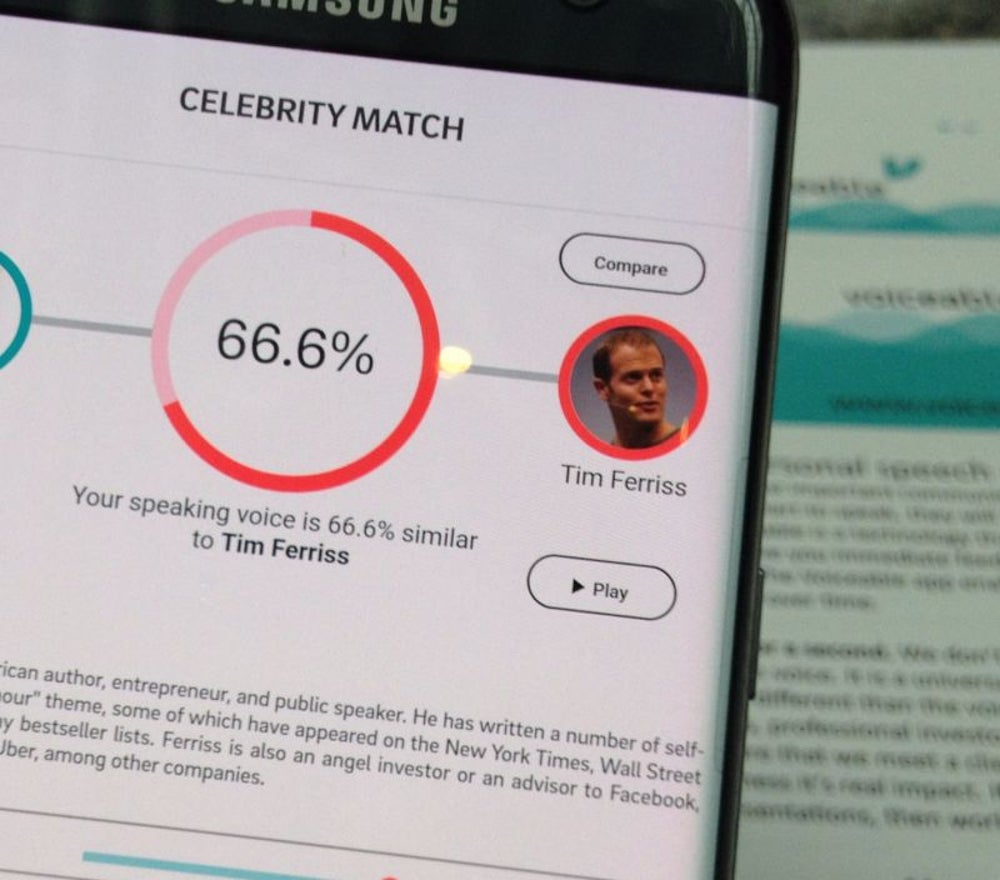 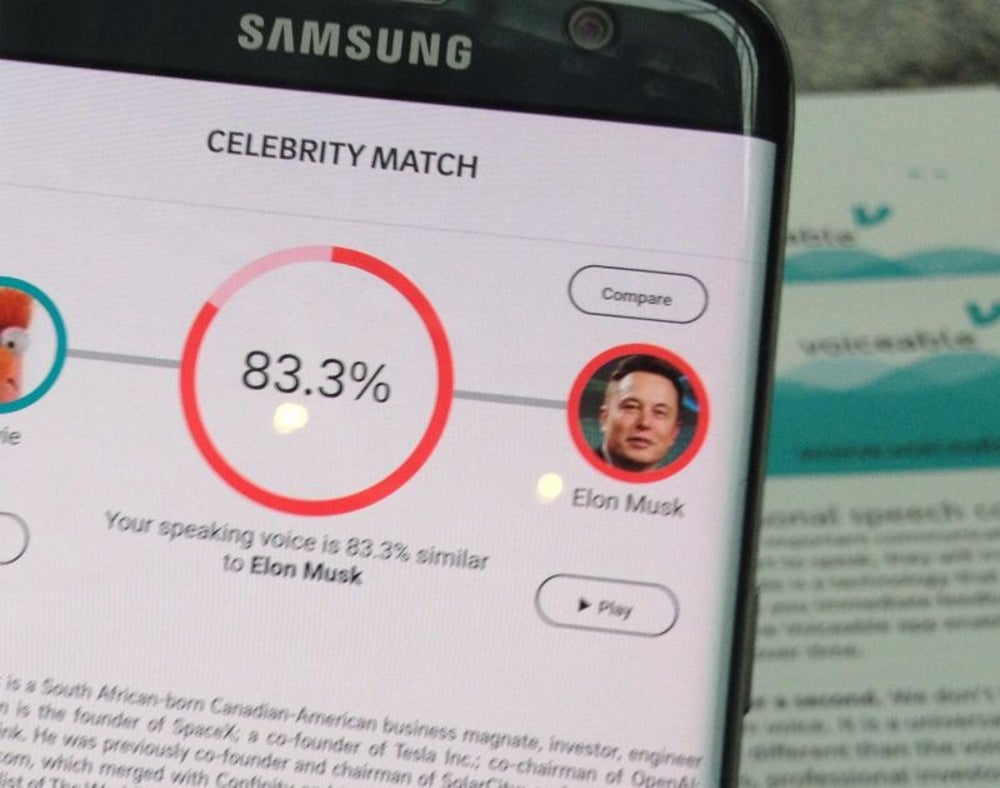 But, weirdly, I apparently really sound like Jeff Daniels. 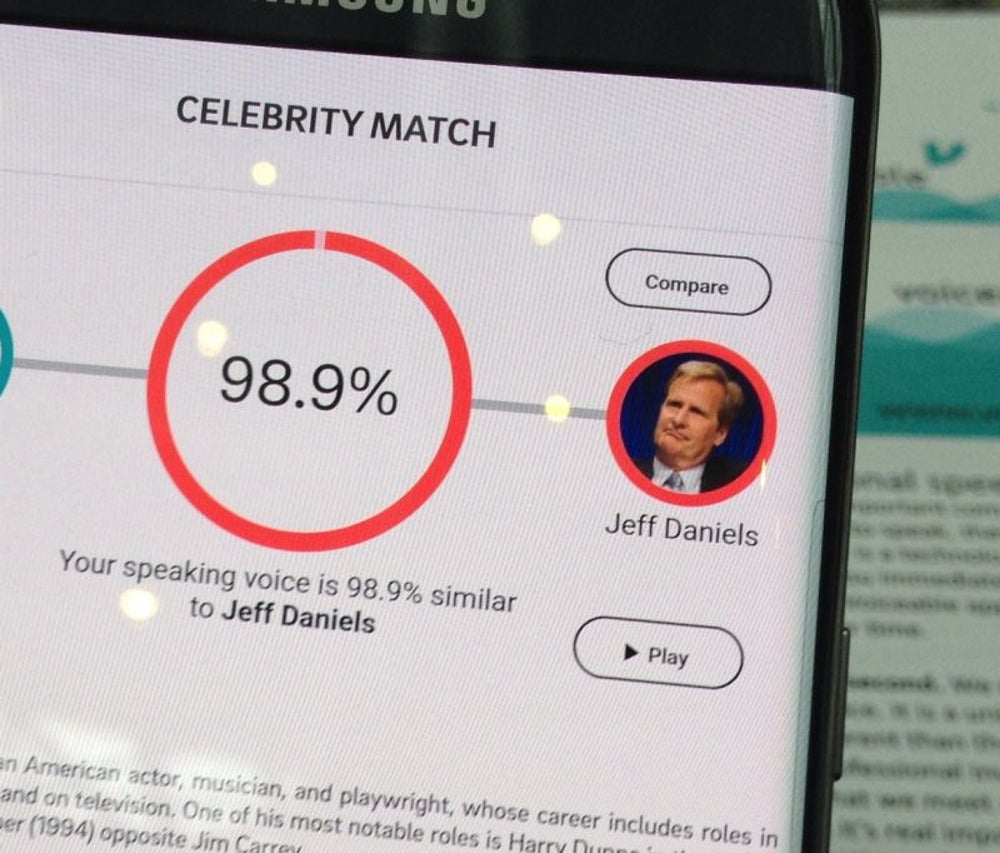 But the key, says Salmon, is that we can change our voices. Listen to ourselves and ask: How can my voice support what I want to say rather than dispute it? 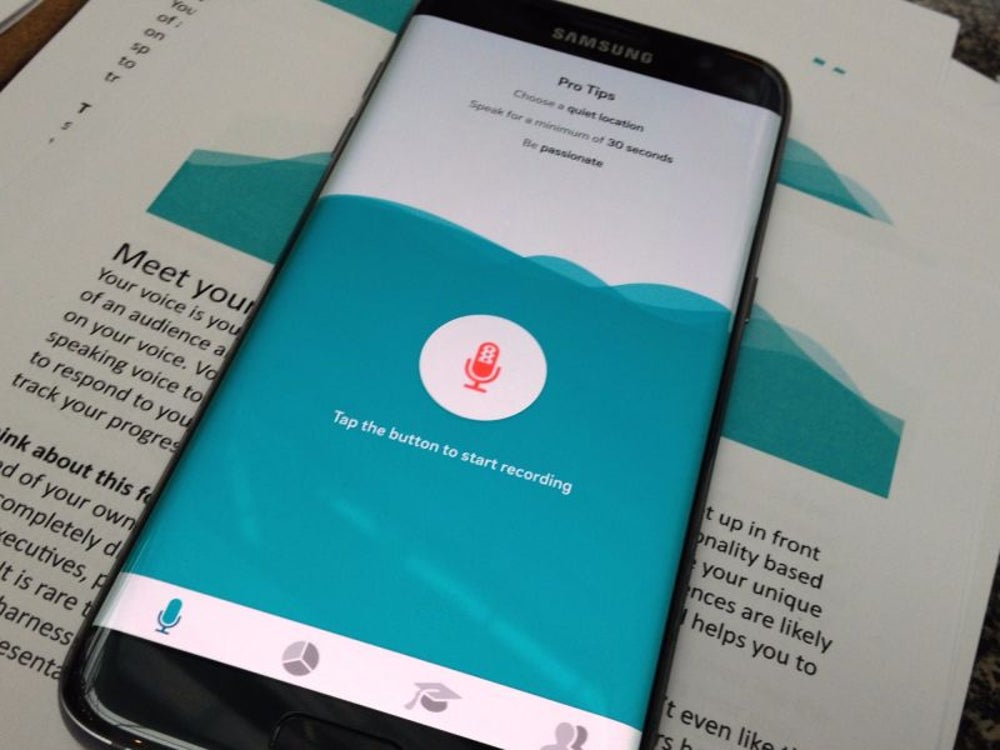