Bethenny Frankel has leveraged her reality TV stardom into a string of thriving businesses. 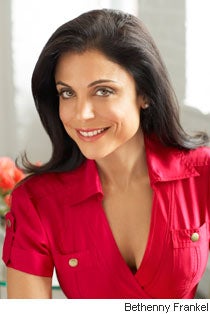 There's a certain level of honesty you get from only two types of people: small children and New Yorkers. Bethenny Frankel is quintessentially the latter, and her signature brand of blunt vaulted her to stardom as one of "The Real Housewives of New York City" on Bravo. She's taken that honesty to the next level on her new Bravo spinoff, "Bethenny Getting Married?" (spoiler alert: she does), where it's on display not only in her personal life, but also in her seemingly endless string of entrepreneurial ventures.

There are bestselling books, workout videos, skin-care products and the Skinnygirl margarita. And in between settling into married life with husband Jason Hoppy, caring for her new daughter, Bryn, and busting the chops of everyone around her, Frankel makes sure every product she puts her name on is a reflection of her genuine personality.

"Everything's very simple, straightforward and honest and makes women's lives easier," she says. "It gives them a solution to a problem. But I didn't plan any of this. I found this and decided that I have a voice that people can understand. My gift is being able to tell people what they should be doing."

There's no shortage of irony in Frankel's ability to help others find their way. A self-described hustler and the daughter of legendary thoroughbred racehorse trainer Robert Frankel, she's trained as a natural food chef and spent the early part of her career bouncing back and forth between New York and L.A. She tried catering, importing, event planning and even acting. And while many who consider themselves entrepreneurs can take a singular passion and turn it into a successful business, Frankel's entrepreneurial DNA is pure and rare--an all-consuming drive that finds its way into everything she does, even when she has no idea what that will be.

"We plan and God laughs," Frankel says. "I don't think I really knew exactly what I was going to end up doing, what was going to be my calling. I say that you always have to be on the road. You just have to be going forward. You don't have to know exactly where your destination is."

Frankel's ability to navigate and embrace the unknown will certainly come in handy. Balancing a successful business and a healthy family is always a big test for any entrepreneur who chooses to pursue both, but the last year for Frankel has given new meaning to the phrase "When it rains, it pours." Just as her star was rising on TV and her businesses were taking off, she got engaged to Hoppy and found out she was pregnant. When she tearfully admitted during the last season of "Housewives" that she never thought she could be the girl who could have it all, there was a tangible sense that her joy was mixed with a healthy dose of trepidation. But if her ability to take calls from her agent and give an interview while breast-feeding her daughter is any indication, then she seems to be adjusting just fine.

"It really is all-consuming," Frankel says of motherhood. "It just comes first. But by the same token, you really can get a rhythm. She's not really that difficult. Everything else becomes inconsequential, and you just narrow it down. Everything becomes simpler. I'm a little calmer because I'm just so happy, so it makes work easier."

Easier is, of course, a relative term. Millions watched as Frankel tirelessly ran her businesses while simultaneously planning a wedding and riding the hormonal rollercoaster of pregnancy. Her move to reality TV was a calculated marketing strategy, one she devised after she was the runner-up on "The Apprentice: Martha Stewart." Network execs saw her on the show and quickly recognized she could be a draw for other audiences. She originally turned Bravo down, but with her first book about to hit the shelves, she began to see the show as a way to showcase her talents and create buzz for her brand.

"It was next to impossible because it's a reality show," Frankel says. "But I was able to insert what I do for a living because I wasn't shopping for diamonds or getting facials or buying lingerie like they wanted me to or like my castmates wanted to do."

The exposure paid off in spades, and while the other housewives were shopping, Frankel was hustling. First there was a pair of books, Naturally Thin and The Skinnygirl Dish, written to help free women from obsessive dieting and what Frankel calls "food noise." Then came a cocktail to match, the all-natural, low-cal Skinnygirl margarita. Frankel also produced a workout video based on the simple exercise routine she does to stay fit (out of respect for her fans, she turned down several prominent trainers who offered to help her lose her baby weight). Next up: a line of skin-care products dubbed Honest Skin Care, a not-so-subtle reference to what Frankel sees as the deceptive nature of the industry. With so much going on in her personal life, some might say it's a classic "be careful what you wish for" situation. But Frankel didn't wish for it--she made it happen, and she's more than ready to make it work.

"Now's my time," she says. "This is my moment. I'm not like Julia Roberts, who can sit around with [her children] Phinnaeus and Hazel because she's so successful for so long. This is my time, and I'm not 25. This is it. On that note, it's difficult because I love my baby and my husband is so understanding, and I do push even him to the limit. However, I have great assistants. They are running the business. I planted all the seeds and now they've grown. So there are people around me doing a lot of the legwork. You get to a point where people around you make it a lot easier."

Interestingly enough, another thing that's made life and business easier for Frankel is the same thing that can also make them so chaotic: motherhood. But she's convinced that if she can make it work, other mothers can--and should--try it as well.

"Women need to know that if they can do it and they feel like they're successful at being a mom, then there's no way that they can't be successful at a business. Trust your instincts. Only you really know what to do with your baby and what's really going on, and the same thing goes with business. Just trust your gut and your instincts and don't have fear about it and you can do it."