This family turned a childhood game into a multi-million dollar business. 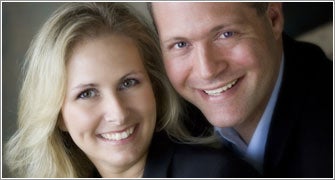 Picture perfect: When Jera Deal took her oldest daughter "letter hunting," it was merely a way for the 15-month-old to learn the alphabet by finding letters in nature and architecture. Four years and two kids later, however, that game had evolved into a full-time business. When they needed a unique and memorable gift for a wedding, Jera and husband Brad framed photos of the letters that spelled the newlyweds' last name. The keepsake was a hit, and the Deals quickly realized they were on to something.

Show biz: Following the 2005 launch of their website, the Deals got into their first catalog and set out to get their product into as many hands as possible. There was one person, however, who they especially wanted to reach: Oprah Winfrey. After a couple of trips to her show and "a little bit of luck and persistence," says Brad, they finally managed to reach the icon. "I stood up in front of 300 audience members and [gave] her a keepsake," he explains. "She opened it and loved it"--so much so that she commissioned one on the spot for Tom Cruise and Katie Holmes. Says Brad, "We were already self-sustaining at that point, but having [Oprah's approval] helped a lot."

Word bank: Today, Jera and Brad continue to build their letter inventory, brand, reach and sales. They're inking deals with a third catalog and are working on relationships with Disney and Hallmark. But staying true to their original vision remains a priority. "We don't ever want to come across as commercialized," says Jera. "This is a family business [that started] as a hobby with our daughters. We want to maintain that integrity."

Follow their lead: Even a successful business can benefit from a high-profile endorsement.

What is your secret to success?
Brad and Jera: The gut answer is faith. We can't tell you how many things got answered in our business because we prayed and prayed. But from a business standpoint: building the brand. When you think MP3 player, you think iPod. In our small industry, we are like that. We are the iPod of our specific market.

What advice would you give other entrepreneurs?
Brad and Jera: Seek out people who have done it before or who can help. Don't be afraid to humble yourself and ask. And don't be afraid to go straight to the top. Ask for the producer's name; ask for the editor's name.

When did you know you'd "made it"?
Brad and Jera: Getting on Oprah's show as an audience member and giving her a keepsake. When she said, "I have to have [one] for Tom Cruise and Katie Holmes," the audience collectively gasped because they all knew what that was going to do for business. She's the most recognizable face in the world. We would have been a nameless catalog company without her.

What was the first toy or reward you bought for yourself when you became successful?
Brad and Jera: Honestly, we have not bought a thing for ourselves. We just donate it. We're house hunting and we'll get a new car at some point, but we already have nice cars and live in a beautiful home. We already have a blessed life, so it's a privilege to give back to the community. In January, we bought new desks for our daughters' classrooms at their private school. The desks have been around since 1972; they were falling apart.