This Exclusive Study Reveals Entrepreneurs Really Do Have Thicker Skins

Entrepreneurs, perhaps more than anyone else, love to talk about their mistakes. They've been conditioned to see failure as a learning experience -- that, rather than being the end of something, a big flop is merely a very useful (though painful) data point along the way to success. And so we wondered: Just how different is an entrepreneur's perspective?

We partnered with the polling company Ipsos to find out. Ipsos reached out to 1,007 people in August, asked if they consider themselves entrepreneurs, and then had them react to a series of business challenges. The results: Entrepreneurs have statistically thicker skins.

In one question, we presented people with a series of challenges -- from having to close stores to laying people off -- and asked if they considered it a failure. The responses:

People who said, "No, this is not a failure." 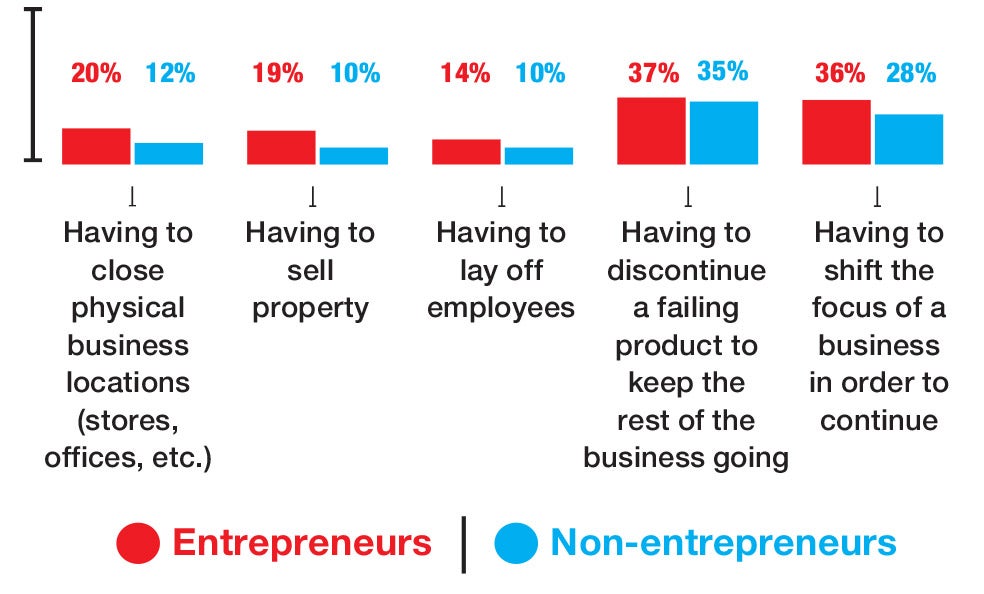 In another question, we presented a series of challenges and asked, "Is this a major challenge in starting a business?" The responses:

People who said, "No, this is not a major challenge."

In both questions, the results were nearly unanimous: When presented with what seems like a challenging circumstance, entrepreneurs were less likely to see that problem as limiting. The one exception, curiously, was managing staff; non-entrepreneurs considered that less challenging than entrepreneurs did (by one percentage point). Perhaps it speaks to something all entrepreneurs know: Managing other people is really, really hard.

We also asked people what the best response to business failure is. The reaction was interesting.

Answer #1: "Do an improved version of the same thing"

So what does that tell us? We'll take a guess: Entrepreneurs are stubborn. And unlike the rest of the world, they don't walk away easily.

Mistakes Failure Starting a Business How to Start a Small Business