For city dwellers and suburbanites, the month of October may just seem like a 30-day prelude to the spookiest night of the year. Far removed from "the land," it's easy to forget that October is also harvest time, when the rewards of the growing season are finally reaped. That also makes it the perfect time of year for cornfield mazes.

According to the USDA, between 1974 and 2002, the number of corporate-owned farms in the U.S. increased by more than 36 percent, and between 2005 and 2006, we lost 8,900 farms. Family farms, as most folks know, need all the help they can get--and ag-tourism like corn mazes is one way family farmers are increasing profits. 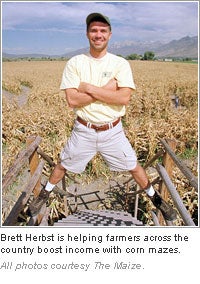 One man in particular has pushed the corn maze craze to the next level in the U.S. Brett Herbst started his own corn maze in American Fork, Utah, in 1996, after reading about a similar enterprise in Pennsylvania. A recent agribusiness graduate of Brigham Young University, he rented land and got to work. Herbst then helped his sister and a friend create mazes the next year. After the second year, the media began reporting on the mazes.

"So many people heard about [the corn mazes] from all different parts of the country. That's when people started calling us, and saying, 'Hey, we want to do something like this. What would it cost?' And we're going, 'Huh, we could probably charge money for this,'" recalls Herbst, who then started The Maize, a company with three full-time employees and many seasonal workers that helps more than 190 farms create mazes each year in the U.S., Canada and Europe.

Designs are only limited to the farmers' imaginations: Past maze themes include Napoleon Dynamite, Gerald Ford and John Wayne. Herbst, who still rents land to run his own maze in Lehi, Utah, but owns a farm in Springville, Utah, even won the Guinness World Record for the world's largest corn maze in 1999 with a cosmic, space-inspired design.

Though most corn mazes are open to visitors only during October, Herbst starts helping his clients design the mazes in February. Some folks cut their own mazes, which begins when the corn is low in June, while others pay The Maize to do it. Herbst also offers marketing support, including a page on his website, though his clients arrange for their own aerial photographs of the mazes. In the late autumn and early winter, Herbst takes care of his financial tasks and finishes up his own farming work. Then it starts all over again. 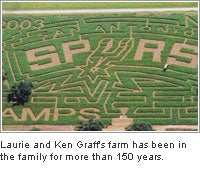 Out on the Farm
Laurie and Ken Graff are using The Maize's services on their family farm and ranch in Hondo, Texas, for the seventh year--though they do things a little differently. "Our maze is grown out of hay grazer, the stuff hay bales are made out of. Corn doesn't grow well in late July when our maze is planted, due to excessive heat and bug problems," explains Laurie, whose 900-acre farm and ranch have been in Ken's family since the 1850s. They've had more than 110,000 visitors to their maze, not including their current season.

Laurie says they first decided to create the maze to diversify and generate more income. Herbst explains that's often the case. With multinational companies taking over the agriculture business, it can be very difficult to compete. "The family farm has 20 acres or 100 acres. How do you compete with this corporate farm that's got 50,000 acres and is bringing stuff in from Mexico or Australia," asks Herbst, who has helped create more than 1,200 mazes since 1996. "Ag-tourism and corn mazes are an avenue to drive people directly to your farm and get that income directly from the consumer."

Extending the Experience
Indeed, it's the value-added experience that brings visitors to farms. Most corn maze operators offer other activities, like hay rides, bounce houses, farming demonstrations, apple picking, pumpkin patches, mini mazes or petting zoos. "Successful mazes often are part of a larger ag-tourism business," says Dan Looker, business editor for Successful Farming magazine, who adds that some farmers also have opened bed and breakfasts or started companies allowing customers to be a farmer for a day. 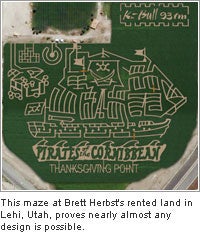 "They aren't farming in the traditional sense," Looker says. "In fact, a maze is an entirely new business with a whole new set of planning requirements--crowd control, parking, increased insurance liability, additional hired help and the need to provide complementary services like food, refreshments, souvenirs, which also increase revenue."

In Temecula, California, a growing area outside of Los Angeles, the Big Horse Feed and Corona Ranch and Land Company offers different activities each weekend at its corn maze like "Old Fashioned Farm Days," which features demonstrations of blacksmithing, wool spinning and sheep shearing.

"It's family entertainment. Everybody can enjoy it from 4 to 80," says Rose Corona, who runs the family ranch and business with her brother Steve. They donate all the profits from the maze to organizations like the YMCA and the Marine Corps. "It's not anything fancy, but I think a lot of people think it's amazing because they never get a chance to go on a farm."