By Diana Ransom February 14, 2011
Opinions expressed by Entrepreneur contributors are their own.

For most business owners who cater to consumers, getting a jump on big shopping holidays like Black Friday and Cyber Monday is vital. But for florists, Valentine's Day is the big one. . . the mother of all shopping holidays, if you will.

And while stocking up for Valentine's Day is largely predictable -- red roses, for example, are bound to be big sellers -- little else is. Flower shop owners have to deal with such variables as the weather, the timing of surrounding holidays like President's Day and local schools' vacations. That men tend to be the main buyers of holiday bouquets adds to the unpredictability.

Fortunately, florists are a resourceful bunch. Here are five of tricks of the trade that even those outside the flower business can learn from: 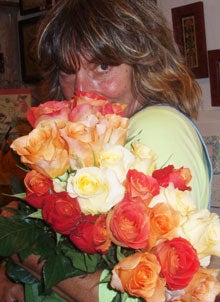 Fonda Sara, the owner of ZuZu's Petals in Brooklyn, N.Y., says she and her staff work round-the-clock to prep flowers and take orders during the mad Valentine’s Day rush.
"Last Valentine's Day was the worst," says Fonda Sara, the owner of ZuZu's Petals, a 40-year-old flower shop in Brooklyn, N.Y., who went on to describe the effects of getting smacked by back-to-back blizzards. Last year's snap of severe weather that barreled through the East Coast like a freight train sparked what folks in the trade now lovingly call: The Great Valentine's Day War. "Roses didn't come to the market." Every shop owner went to the flower market and -- politely, noted Sara -- haggled with sellers over the price of what roses they did have. "Everyone was carrying handfuls of flowers… it was as chaotic as you can possibly imagine," she says.

Have a backup plan.
After seven years of running Minott's Flowers, a 110-year-old flower shop in Portland, Maine, Melissa Wirth can similarly attest to the vagaries of the weather. "I've gone through major nor'easters hitting us on the holidays," she says, adding that she's also had to deal with other big mishaps like when flowers come in frozen off the truck or not being able to make deliveries because customers weren't home when they said they'd be. "I've seen the big things that could possibly cause a glitch," says Wirth, who is now an ardent fan of back-up plans. "I always have a plan B," she said. "I have a plan B for products, for staff, for the weather."

Get organized.
It helps to have as much done in advance as possible. "I start pre-prepping on Dec. 26, the day after Christmas," says Wirth. In addition to placing orders for roses and other hard-to-get flowers, she stocks up on Valentine's Day necessities like chocolates and strawberries, ribbons, vases and cards. Sara says she starts to get organized for the big day starting about Jan. 10. She writes up two lists: One includes everything she bought last year, while the other has new ideas. "I have to be ready. Some things change. For instance, prices go down, and some flowers become more popular," she says.

Staff up.
Owners need to hire additional help for what can amount to an onslaught of phone calls, web orders and flower prep. To be ready for Valentine's Day, Wirth grows her staff from five to 20 and brings in 15 extra drivers. Sara from ZuZu's Petals says her staffers work round the clock over the holiday. "It took four of us working constantly for 10 hours to prep the flowers," she said.

Lock up early orders.
While you should be ready for last-minute shoppers, try to get as many pre-orders for the big day as possible, says Jennifer Sparks, from the Society of American Florists, an industry association in Alexandria, Va. "That way, they can better plan and know in advance what they need to do to get ready for the big day -- be it having enough product on hand to meet demand and having a delivery crew ready and waiting," she says. Although Sparks added that men -- the dominant V-Day flower shoppers -- tend to wait until the last minute, encourage them to shop in advance via making it easy to do online or by offering incentives such as free delivery or a box of chocolates. "The further in advance that you have orders, the better," says Sparks.