Super Bowl Opportunity: Getting a Lift from 'Daddy' 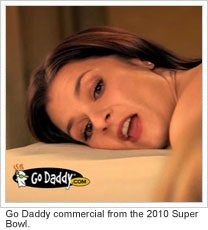 With such a colossal viewership and TV networks reportedly charging millions of dollars just for one 30-second advertising spot, it's no wonder Super Bowl commercials are dominated year-after-year by major corporate players with deep marketing budgets. This year, though, a small business found a way to break through -- on the shoulders of a more established company. Web hosting powerhouse Go Daddy will feature .CO Internet S.A.S., the operator of the new .CO domain, in one of its two 30-second spots.

After .CO launched in early 2009, it moved quickly to align itself with accredited registrars, like Go Daddy, to help resell the fledgling domain to a cache of corporate players including American Express, Coca-Cola and Google. Apparently it didn't take executives at the two companies long to began planning a Super Bowl commercial collaboration.

"We considered doing our own advertisement, but the more we thought about it, the more we realized that partnering with Go Daddy was a natural fit," says .CO Internet S.A.S. Chief Executive Juan Diego Calle. A 12-person operation, .CO has registered more than 600,000 companies to the domain. It generated more than $20 million in revenue in 2010.

Go Daddy, of course, has become somewhat notorious over the years for its controversial Super Bowl ads that often feature attractive women. Keeping step, Parsons says this year's Go Daddy/.CO ad will feature auto racing driver Danica Patrick and Jillian Michaels of "The Biggest Loser." Patrick and Michaels will help reveal a "GoDaddy.CO Girl," whose identity is being kept secret (although teased over social media) until the ad airs on Feb. 6. The ad will direct viewers to log onto GoDaddy.CO for more information.

Calle hopes the piggyback will propel .CO to "widespread, mainstream recognition." If it gets anything close to the attention Go Daddy's previous ads have gotten, then that shouldn't be a problem.

Would you ever consider partnering with a larger company on a national advertising campaign?

RELATED:
What You Can Learn from Super Bowl Ads