Diana Ransom
April 4, 2011 min read
Opinions expressed by Entrepreneur contributors are their own. 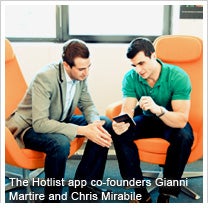 You can build a business, but what if, to borrow from Field of Dreams, no one comes?

That was the dilemma once facing the Hotlist, an application that allows users to track what their friends are doing offline and preview an evening out on the town. It won a business plan competition at New York University’s Stern School of Business in 2007. Its main challenge now? Finding the legions of users whose profiles and proclivities would further enhance the utility of the Hotlist. The apps co-founders Chris Mirabile and Gianni Martire decided to use Facebook Connect, a doorway that allows third-party sites and apps such as Hotlist to authenticate users via Facebook, among other things.

Facebook Connect helps the Hotlist attract users who may be leery about signing up for yet another social networking site, as they don't necessarily need to sign up to participate. “Unlike other geographically based services, friends don’t have to be members of the Hotlist to see what others are doing via the Hotlist,” says Mirabile who notes that the site now boasts more than 200 million active users. “It’s like we’re Facebook’s next door neighbor, but we have a gate where people can walk in between.”

This type of piggybacking on popular sites like Facebook and Twitter, which allow developers to build applications that complement the sites, can be critical for many businesses. The reason? Working through a larger site, provides a certain degree of familiarity for those who may be worried about identity theft or want to avoid having to keep track of too many passwords. Using a big site can also allow you to reach loads more potential customers than you might otherwise.

Here’s how the Hotlist works through Facebook Connect: Two friends put together a gathering with other friends but they aren’t quite sure where to go. They drum up a list of locales and then plug them into the Hotlist app via Facebook, which will then aggregate information about each place from various online sources such as Facebook, Google, Yelp and Twitter. When the invite goes out, all of a sudden, people who’ve never heard of the Hotlist, see it first hand.

“Now they are shooting it out to three people and five people. Each time they use it, others are growing in awareness, seeing the benefits of participation. That turns into conversions,” he says.