When diet and exercise aren't enough, a look at five quirky tactics for tamping down tension.

By Diana Ransom July 22, 2011
Opinions expressed by Entrepreneur contributors are their own.

To relieve the day-to-day stress of running a business, many entrepreneurs exercise -- jog, swim, yoga, you name it. Some also may meditate or even unwind with a glass of wine from time to time. Then there are those who lean more toward the unusual, some may even say peculiar, to help them cope when overwhelm starts to kick in.

We asked a range of entrepreneurs to share with us some of their more unusual stress-busters. Here's a sampling of what we found. 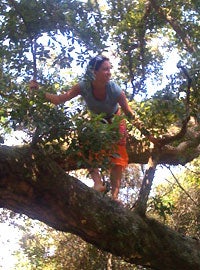 Bess Wyrick has a thing for plants. In college, she studied ecopsychology, which looks at how people interact with the environment. She's the founder and artistic director of floral design house, Celadon and Celery Events and Environments. Her biggest business stressor is managing employees. "I have seven people who work for me, but they don't all work at the same time," she says. When work drives her up a tree, she literally climbs one in New York's Central Park. "It's the sound of the leaves with the wind blowing through. It is very peaceful," says Wyrick. "Climbing trees inspires me, calms me down and makes me aware of my breath." 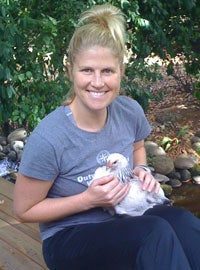 For Chelsea Morgan, working from her Portland, Ore., home is peaceful and quiet, but at times the silence becomes unbearable. "There is no one to chat with, to bounce ideas off of, brainstorm solutions with -- and that sometimes feels stressful," says Morgan who co-owns Yala, an organic clothing and housewares design firm. Some might say her stress buster is for the birds. Whenever her feathers get ruffled, she walks out to her husband's backyard henhouse and hugs a chicken. "It instantly reminds you of life's simple joys," she says. "It's reassuring to see how life goes on, despite whatever is stressing us out." 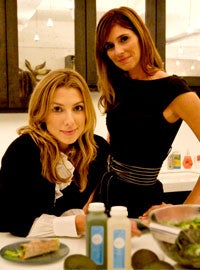 BluePrintCleanse is in the health business, but the day-to-day pressures of running a new enterprise can lead to unhealthy stress, according to Zoe Sakoutis, who co-founded the juice-cleansing company. She says despite recently securing coveted shelf space in Whole Foods, she needs to continually educate prospective customers and prove why her products are different. "We're not a do-it-yourself cleanse," she says. When the stress gets downright unwholesome, she and the company's other co-founder sing show tunes. "It's cathartic," says Sakoutis. "I always feel better after belting out a Barbra Streisand song." Her go-to number? Streisand's "Don't Rain on My Parade" from Funny Girl, a popular musical that became a blockbuster Hollywood film in 1968. 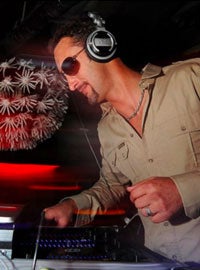 Chris Porter admits running a 100-employee company can create tension. "I don't have to report to anyone and that's great. But I have 100 bosses," says Porter, founder of Training Camp, an information-technology training firm. Porter finds relief in having what some might view as an alter-ego: Once or twice a month, he's "Zenbi," a deejay who spins house music at nightclubs and festivals all over the world. Two recent shows took him to Milan and Budapest. He also sometimes pilots his own four-seat Cirrus SR20 monoplane to gigs in the States. As Porter puts it: "Anything that allows you to divert your focus helps relieve stress." 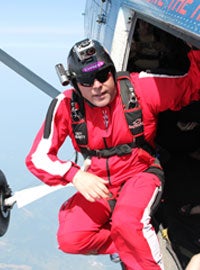 After a publicity stunt sent him hurtling toward the earth at 14,000 feet with 150 other CEOs, Peter Shankman was hooked. The founder and CEO of Help A Reporter Out, a service that connects reporters with resources, found what he calls the ultimate stress-reliever. "I woke up the next morning, and I couldn't stop thinking about it," he says. Since then he has made more than 250 jumps. "There's just something about jumping out of an airplane at 14,000 feet to clear your head," says Shankman.