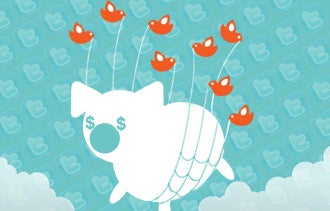 It used to be that advertising on Twitter was limited to large companies and brands that could afford it and with whom the microblogging platform chose to work. But come late March, any business or brand -- regardless of its size -- can promote their product or service on Twitter by using a new self-service tool similar to the ones offered by Facebook and Google AdWords.

To kick things off, Twitter announced a partnership with American Express late last week to give the first 10,000 eligible Amex merchants and cardholders who sign up online initial access to the advertising program. Amex reports that the program is still open to interested businesses. All other businesses are expected to be able to advertise on Twitter by late spring or early summer.

So, is Twitter a good place to spend your advertising dollars? Investors and businesses seem to think so. With an investment of about $1 billion, Twitter generated about $150 million in revenues last year and could amass $260 million this year -- with 90 percent of those totals coming from advertising.

One reason why Twitter has been so successful in attracting ad dollars may be due to the "broadcast" nature of the platform. Unlike Facebook, where users have a reasonable expectation that dialogue will occur between one another, Twitter users are accustomed to one-way communication. In fact, less than 10 percent of Twitter's registered users create about 75 percent of its content. In essence, Twitter is the world's largest opt-in, permission-based messaging platform, and, if I tweet about my cat being sick, I'm likely to appreciate a local veterinarian's Promoted Tweet or Account, which may miraculously show up a few minutes later.

Still, small businesses and brands should proceed with caution. Approximately 20 percent of the site's registered accounts aren't even active, so visions of tens of millions of tweeters seeing your ad may likely turn out to be a mirage. Also, Twitter users might react negatively to an onslaught of ads.

Unlike Facebook, which has featured display advertising since 2007 -- and has attracted 500 million new users since that time -- Twitter has remained relatively free of such distractions. Promoted Tweets, Trends and Accounts show up on occasion, but nothing like what might occur when every corner business or merchant is invited to advertise on the platform. Generally speaking, while there's nothing necessarily new about annoying ads, Twitter users aren't one bit shy about broadcasting their feelings -- often with a vengeance.

The best way to proceed may be to carefully test Twitter's new self-service advertising platform when it becomes available in a few months. Run a few ads ad up the tweetpole and see if anyone salutes.

Would you advertise on Twitter? Let us know why or why not in the comments section.

5 Things You Should Never Say to a Journalist

How to (Finally) Start Landing High-Ticket Clients of Your Own

The Two Meetings with Gary Vaynerchuk That Changed My Life

How to Know if an Online Marketing Expert is Actually Credible