Your Eyes and Ears on the Ground: SXSW Interactive 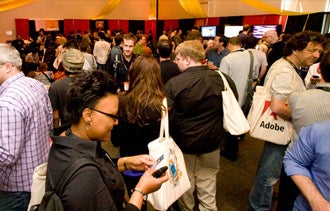 Austin, Texas has a reputation as a bustling city. But for the past week, things have been eerily calm. It’s the calm before the storm, and that storm is the five day 19th Annual SXSW Interactive Festival (and then five more days of the Film and Music festivals).

What started as South By Southwest's awkward little cousin, the Interactive festival has exploded from 800 to 19,000 attendees since 1994 and is recognized as one of the premier events for showcasing cutting edge technology, industry pioneers and an international stage to proclaim The Next Big Thing. Naturally, this attracts a plethora of talent -- from startups to Fortune 100 companies -- to converge in Austin and network, share ideas, forge new contacts and investors, and, most importantly, enjoy all that springtime in Austin has to offer.

In marking our second year of combined coverage, Entrepreneur and Door Number 3 will be diving headfirst into it all for you. If you can’t make it to SXSW this year, just point your browsers here. For the next five days, we will serve as your eyes and ears on the ground, inside the conference panels and around the cocktail bars. The Interactive festival, housed mainly in the downtown convention center, can be an arena of pure chaos. Imagine tens of thousands of people, laptops, tablets or smart phones in hand, speed walking in every direction to get to the next discussion panel, interview, Q&A, meet and greet, trade show booth or cup of caffeine.

Delving into this spirited anarchy, we’ll go to the heart of Interactive: what are entrepreneurs excited about? What is the state of the startup? What is the outlook for the year ahead? What are the hottest topics of conversation? (Here’s a taste: digital currency looks to be huge in 2012’s sessions).

Not only will we be your pulse on the conversation, we’ll report on some of the biggest names that the world of entrepreneurship has to offer. We'll bring you coverage of social-media giants like Reid Hoffman, who will be sharing his blueprint for success using case studies like LinkedIn and PayPal. We'll also look to AOL co-founder Steve Case who'll likely delve into the complex role entrepreneurs play in today's society -- whether it's creating jobs or sparking innovations that change the way we live. We'll also discuss the long-term goals of Ben Silbermann, the co-founder of Pinterest, the most buzzed about social-media platform of the last six months. The list of marquee names keeps going.

So, bookmark Entrepreneur’s special coverage of SXSW and look for daily recaps, articles, photos and videos of everything hot at Interactive. No year has been more catered to the entrepreneur in recent memory, and no year looks to deliver more insight and inspiration then the 19th Annual SXSW Interactive Festival.

What are you most looking forward to seeing at this year's SXSW Interactive Festival? Leave a comment and let us know.

Related: Reid Hoffman, Permanent Beta and the Startup of You