Zipcar: Two Moms, a Business Idea and $68 in the Bank

By Carol Tice June 1, 2012
Opinions expressed by Entrepreneur contributors are their own. 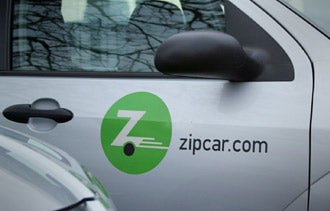 Zipcar founders Antje Danielson and Robin Chase, both 42, met when their children attended the same kindergarten class. At the time, Chase, a stay-at-home mom who had a master's degree in business administration, wanted the flexibility that came from having her own business, while Danielson was looking into how other countries reduced car trips for a Harvard energy-research project.

Danielson penciled out the business opportunity of car sharing, but didn't have the business knowledge to run a company. Danielson's husband suggested she connect with Chase.

In 1999, Chase began work on a business plan for a proposed start-up to offer a car-sharing service in Cambridge, Mass. Meanwhile, Danielson investigated the technology they would need and tapped contacts from her car-sales days. Their research showed that the car-sharing market was poised to explode.

Flexcar had applied for federal funding, which meant its application -- complete with budget figures -- was a public document. Danielson studied it, but disliked the government-subsidy model Flexcar used, which kept hourly rental rates too low at $3.50 per hour. While setting fees higher, her plan kept the average rental below the typical $45-a-day rate charged by traditional car-rental companies.

After a few months, Chase and Danielson were ready for some feedback. Chase approached her former mentor, Sloan School of Management Dean Glenn Urban. Danielson and Chase went to Urban's office for a meeting.

The pair expected Urban to poke holes in their model, or to say Americans wouldn't take to car sharing. Instead, he told the women their idea was too big for Cambridge. Car sharing had huge potential. Chase recalls, "He said, 'Your business plan is way too slow. You've got to scale it up by a factor of three.' We were really shaken by it."

Apparently, the car sharing business wouldn't fulfill Chase's dream of launching a small start-up she could fit around family responsibilities. For several days she "moped and mulled" around the house, wondering what to do.

The answer came from her 12-year-old daughter, who noticed mom's quiet mood and cornered her in the kitchen one night. Chase explained how successful the company could be, and how car sharing might positively impact the planet, but that it would likely mean round-the-clock work hours for a while. Her daughter knew the family donated some of what it made to children's causes.

"And she said, 'Are you kidding? You could make more money and save so many children's lives if this succeeded. You should absolutely do it,'" Chase recounts.

Finding the right name for the business involved considering dozens of potential names. But the website URLs for many early favorites were already taken.

Eventually the list narrowed to five, three of which were notable: Wheelshare, U.S. Carshare and Zipcar. Chase wrote the names on 3x5" cards and started taking consumer polls. Wherever she was --n coffee shops, in the bank line, at her children's swim meets -- she would get out her cards. Then, saying nothing about the planned business idea, she'd ask people what thoughts each name evoked.

She learned fast. Wheelshare made people think of "wheelchair." U.S. Carshare tested poorly, too. About 40% of consumers disliked the word "sharing." Also, that URL was taken, with the site owner willing to sell only if he could receive a 10% stake in the company. Zipcar tested best. Chase also tested another small pack of 3x5 cards with five slogans. The winning tagline was: "Wheels when you want them."

It was time to build the reservation and car security technology and to lease the initial cars, which meant time to raise money. Chase began talking up Zipcar to alumni, businesses, environmental groups, and her local networks. In February, she had one Sloan classmate and her husband over for dinner, hoping for a little advice.

Instead, the woman turned to her husband and said, "What do you think, honey? Should we invest $50,000 in Chase's company?" They became Zipcar's first funders. The funding was structured as a loan convertible to Zipcar equity once the company's valuation was established in its first venture-capital fundraising round.

In all, Zipcar would raise $75,000 pre-launch, a figure Chase looks back on as laughably low. Technology costs were substantial and quickly consumed almost the entire amount. Their first engineer had to be persuaded to work for equity. As quick as money came in, it disappeared. As launch time neared, Chase found the company with just $68 in the bank.

There was an unpleasant surprise when it came to negotiating the car leases. After financing the first car with Chase's home as collateral, the car leasing companies wanted a $7,000-per-car deposit for each additional vehicle, as this was a business start-up that could fail. Worse, U.S. insurers were uninterested in covering the start-up's vehicles. Chase was beginning to doubt the company could launch on time when she had a breakthrough.

"I was at a cocktail party in Boston for the opening of Salesforce.com and ran into an angel investor I had been talking to," Chase recalls. "He says, 'How are things going?' and I said, 'I really need $25,000, and I need it by tomorrow.'" By 10 a.m., the angel sent Chase a check for $25,000. She was able to lease the two additional cars Zipcar needed for its launch.

This article is excerpted from How They Started: How 25 Good Ideas Became Great Companies by Carol Tice (Crimson Publishing, 2012).

Related: The Method Vision: Green Consumers Want to Have Fun, Too