5 Things to Consider Before Buying a Smartphone or Tablet

Amy Gahran
August 9, 2012 5 min read
Opinions expressed by Entrepreneur contributors are their own. 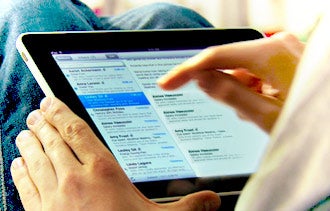 Choosing a mobile device for work isn't just a matter of deciding whether you want an Android smartphone or an iPhone. Maybe what you really need is a large tablet, or a small tablet, or a netbook or a phone/tablet hybrid.

Your choice will depend largely on what you need to do with the mobile device and where you'll be using it. Answering these simple questions can help you decide which kind of device will meet your mobile work needs.

1. How portable should it be?
Do you regularly carry a briefcase, purse or computer bag? If not -- and if you'd rather not start -- then a smaller smartphone that slips into your pocket is probably best.

Many smartphones, including the iPhone 4S, are 4.5 inches tall or less, and 2.5 inches wide or less. Hold various models in your hand to see which ones feel most comfortable.

2. How much typing will you need to do?
When writing anything longer than quick search requests, texts or tweets, smartphone typing can be slow and prone to errors. That's when a physical keyboard can be useful. Options include purchasing a netbook or laptop with a built-in keyboard, or a keyboard that connects to your mobile device via Bluetooth or USB.

Before buying a keyboard, make sure it's compatible with your specific mobile device. Also consider how you'd carry the keyboard around. Many models, from manufacturers such as Freedom Input (starting at $25) or Inland Products (starting at $15), collapse or roll up to fit easily into a pocket or purse.

If you prefer writing notes by hand or need to sketch designs, most tablets are large enough for you to write with your fingertip. Some devices, such as the smartphone/tablet hybrid Samsung Galaxy Note, offer the option of using a stylus.

3. How much battery life will you need?
Poor battery life is the downfall of most mobile devices, especially ones with large, bright touch-screen displays. At a recent online security event, a Symantec senior product manager said that mobile analytics show a steep weekday decline in mobile Internet traffic throughout North America around 2 p.m. local time. The reason? That's about the time when many smartphones start running low on battery charge.

If you're often unable to charge up at an electrical outlet, consider spare battery options before you buy. For instance, you can't swap out the battery on an iPhone, iPad or Macbook Air, but you can on most Android and Windows Phone devices, and on most laptops and non-Apple netbooks.

It's common for mobile devices to come with a low-capacity battery. Search online for your smartphone's make and model, plus the word "battery" to find the largest capacity battery your phone can take. Sometimes "extended" batteries are larger in size, so you might need to purchase a special back cover to accommodate one in your phone.

You might also want a charger so you can charge both your phone and the spare battery at once when plugged in. Prices for such a package can range from $25 to $60. Other accessories, such as a car charger (usually $10 to $40) or any of the Mophie spare-battery products for Apple mobile devices, can also come in handy.

4. Will you be working outside in daylight?
Many mobile devices have screens that are hard to see in full daylight, even when cranked up to full brightness, which drains the battery much faster. The Retina displays on new Apple devices perform well in full daylight, and there's speculation that Samsung and other manufacturers of Android devices may soon be launching devices with comparable displays.

5. Will you need to record audio or video, or take lots of photos?
If you need a mobile device for creating, not just showing or playing multimedia content, then pay special attention to the built-in camera and microphone. Don't just go for the highest-megapixel camera. Look for reviews of camera optics and image processing features.

Also consider how you'll want to physically handle the device when shooting or recording. For instance, most tablets include a camera and will shoot video or photos. This is fine if you're propping the tablet up for stationary shots or video chats. But to capture live action or pan around, smartphones are generally easier to maneuver than tablets.

The secret to good video is good audio. Because the built-in microphones in most smartphones and tablets aren't great for more than quick audio notes, consider getting a plug-in microphone. A lavalier microphone to clip onto a shirt or jacket can cost $15 to $40. For an iPhone or iPad, you'll also need an adapter, which costs about $25.