By Jane Porter September 15, 2012
Opinions expressed by Entrepreneur contributors are their own. 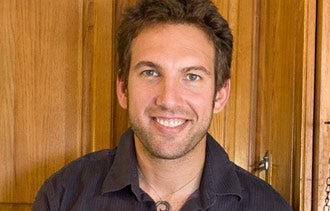 Editor's Note: Each year, we honor a top entrepreneur in our annual Entrepreneur contest. Meet the finalists in the running for Entrepreneur of 2012. Here, a look at Justin Gold, founder of Justin's Nut Butter.

Justin Gold’s squeeze-it nut butter packets have been to outer space on a NASA shuttle. They’ve been in kids’ lunch boxes, long road trips and hikes through the mountains. Last year, his business, Justin’s Nut Butter earned $10.7-million in sales.

It all started with a young guy living with a group of roommates who kept stealing his food. Gold was making his own nut butter while living in a shared apartment in Boulder, Col. "The whole idea was to create something that I would just eat. No big deal," he says. "My roommates fell in love with it. They kept taking it and eating it." Gold started writing his name across his jars to keep his roommates from stealing his food. Ten years later, his hand-scrawled name can still be found across his nut butter jars, now sold in stores around the country.

Gold founded his business in 2002 after he started selling nut butter at the local farmers market in Boulder and the product took off. Inspired by the too-sweet energy gel packs he would take on mountain bike rides, Gold got the idea of a squeeze pack filled with nut butter as a healthy protein-rich alternative to artificial energy boosters. The squeeze-packs were a hit, not just amongst active-types like himself, but with parents looking for healthy snacks for their kids.

Today, the brand includes eight types of nut butter sold in single-serve squeeze packs and jars including flavors like maple almond, honey peanut, and chocolate hazelnut. Last year the company came out with a line of peanut butter cups that have become popular, including a vegan dark chocolate peanut butter cup that has earned half a dozen awards. Most recently the brand has expanded to offer a line of candy bars.

For Gold, sustainability and using organic ingredients is integral to his business approach. His nut butters are packaged in post-consumer recycled plastic and ingredients come from organic sustainable farms.

And his 12-person Boulder-based company is a tight-knit group. Every year, he takes them on a company vacation and they spend a week volunteering together at a Native American reservation in South Dakota. "The Justin story isn’t just about me," he says. "It’s about our entire team."